October 30 2017
27
Why did Kurt Walker come to Kiev with an emergency, unplanned visit? Understand from the official information is impossible. Confirm the “fundamental importance of proper implementation of the Minsk Agreements” and receive Poroshenko “thanks for actions aimed at restoring peace in the Donbas”? And "strengthening the international presence in the Donbass"? 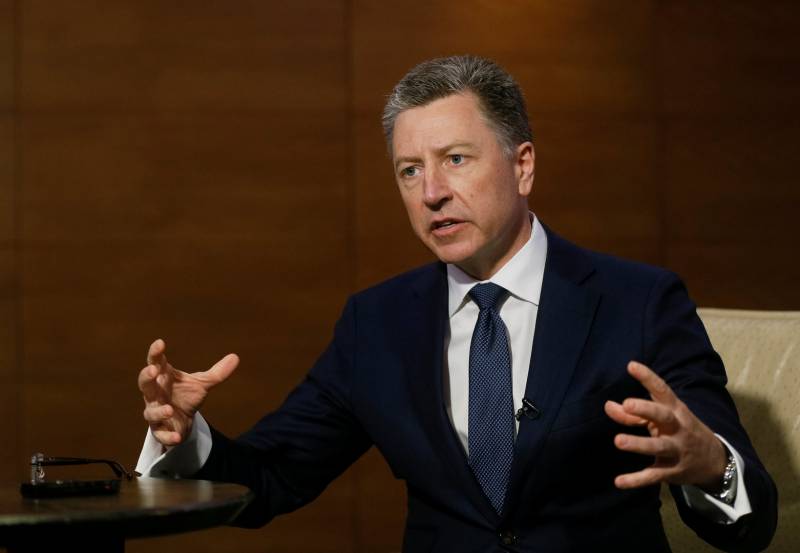 Moreover, the most important question for Poroshenko now is not the Donbass and not the Minsk agreements, but the goat maidan under the Verkhovna Rada, who will read it for the role of "goat to go." But about this, the most burning question, Volker did not utter a word, even on his twitter, where he mentioned “a good conversation with Poroshenko”.

A very modest press about the emergency visit of US Special Representative Kurt Walker also does not report anything - about his attitude to the Third Maidan under the Rada. They write only about the Donbass, where Volker shows himself to be a real second McCain, only without brain cancer, therefore more cool and thin, I noticed it in the previous article.

In a recent Reuters interview, Volker said that “Russian aggression” led to the current situation in the Donbas, and “Russia continues to keep this territory, keeping the conflict alive.” Supply question weapons Bandera Ukraine "should not be controversial," because "no one is going through when someone is defending, unless it is the aggressor." That's what Walker isn't McCain?

The fact that Volcker has no obligations to Petro Poroshenko, who may have been given by McCain and his friend Joe Biden. Although he did not publicly say anything about Maidan under Rada Walker, the Third Maidan said about himself to Veche right during the visit, which is a very interesting coincidence. At this meeting, war veterans "for the independence of Ukraine" (?) Created the movement "For the liberation of Ukraine from oligarchs and traitors" (!), Headed, apparently, with the commander of the Nazi battalion "Donbass" Semyon Semenchenko. More Maidan demands to adopt a law on the impeachment of the president and the early election of the Rada and the president, that is, the "goat removal".

It seems that the dispersal of the goat Maidan is no longer going on, Semenchenko is grinning at this, and hinting that Paruby, Groisman and Turchinov have already left Kiev, out of harm's way. In general, while all attention was riveted on the protest heel of the Rada, the Nazi veterans moved their activities to the regions, where they began to block the "earnings of the supreme commander in chief." This means that tomorrow the national guard ring around the Third Maidan itself may be in the ring of "blocking".

And at such a time, Volker, the commander-in-chief of Poroshenko, speaks his teeth: “In Ukraine there is not an interethnic or internal conflict, but a Russian invasion and occupation. It is important that Russia recognize that its efforts have led to great losses and defeats. ” Well this is how much will have to wait, mocks? - Poroshenko probably thinks ...

“He understands the logic of the actions of the Ukrainian parliament,” said one of its leaders, Anna Gopko, following a meeting with Volker. Yes, Volker simply took the position of the “party of war” in the Rada, and demands Poroshenko to urgently resume fighting in the Donbas, to continue the war “for independence” if he does not want a war “for liberation”.

In fact, with his urgent visit, Volker supported the Third Maidan, and put Poroshenko in a difficult position. Petro may once again declare war on the Donbas, but it is unlikely that “ATO veterans” will believe him: the war in the Donbas is already under way, without any announcement, and without prospects. Actually, Poroshenko’s idea of ​​introducing NATO peacekeepers to the Donbass was caused by the impossibility of a military victory.

Even the urgency of the Volcker visit can be caused by internal actions in Washington, perhaps the local “war party” and the Volker feel the end of their mandate and rush to blow up the situation in Ukraine. And Poroshenko put in a hopeless situation between the Maidan and the Donbas. In fact, Volker brought the war to Kiev, as she is already on the Donbass. The “international presence” in the person of the OSCE SMM head Alexander Hug synchronously with the visit of Volcker to Kiev stated: “Escalation in the Donbas is inevitable”.

Konstantin Kosachev qualified Volcker’s visit as “an attempt to cancel the Minsk agreements,” Alexei Pushkov called him “a special representative to thwart a settlement in Ukraine,” while Vladimir Putin did not notice Kurt Volcker at Sochi, and generally the United States in Ukraine: “Today’s the situation is the result of unconstitutional armed seizure of power in Ukraine, and Europe is to blame for this, because it supported this terror. ” Two points are interesting here: Putin called the situation in Ukraine “terror”, and did not mention America at all, blaming all the blame on Europe. Does Moscow not want to deal with the Volker at all? We note that Volker described the situation in Ukraine in opposition to Putin.

Political analyst Vladimir Zharikhin, commenting on the failure of Kiev and Washington of the Minsk agreements and the peacekeeping operation on the line of demarcation in the Donbas, noted that after that Russia had no choice but to proceed to the third scenario: the destruction of the Bandera regime. This does not mean the introduction of troops to the Donbass, as many hope, but the termination of relations with the regime, stubborn in its Bandera Nazism. Russia's trade with this regime is still very significant. Now he can finally get complete independence from trade with Russia. And Europe will have to take on the full content and Bandera, and Petlyura, and Shukhevych.