Ukraine as a country without people. How to kill the soul of the people

November 1 2017
25
Probably each of the readers had meetings that arose completely out of nowhere. When any aunt or another relative suddenly tearfully asks to bring her (him) to the station because “Vasya (Petya, Masha, Dasha ...), who you know very well, is passing, remember when you had 12-13 they represented you to each other for years. The son (daughter) of Aunt Masha, whom you saw at the age of six, and this Vasya carries a jar of absolutely miraculous jam from his aunt's homeland. 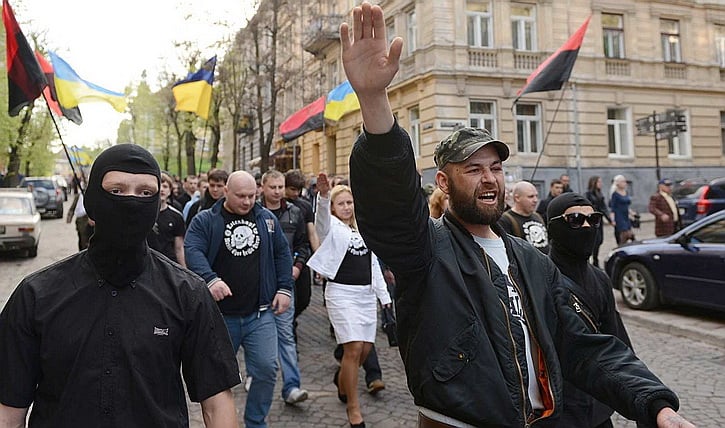 Approximately this situation happened to me. Day off. Snow and frost. Ice on the roads. Beauty. And the call. In the style that I described above. I could not refuse. And for good reason. This article is the fruit of this trip to the station and almost an hour of conversation with the "familiar." To me, honestly, the schedule of our super fast trains is completely unclear. Then they rush about like a pack of wolves go off, then stand for an hour at the stations.

The “old friend” turned out to be a complete stranger. He knew about me exactly as much as I knew about him. Simply put, nothing. Yes, and Ukrainian, he was "fake". An ordinary Russian man who fell in love a long time ago with a Ukrainian maiden and left for Ukraine. To Kharkov. Well, there is an apartment, children, friends, a summer house ... Life in one word. Even when all this mess started (his words) I did not think to leave. "Where and to whom are we needed?"

In short, a man of ordinary, not heroic. The one on which this world stands. Will work. Will fight if they call. Will vote for whom they say. For him, the main thing is just to live. Do not fight, do not expose political demands, do not Maidan ... Just live a normal life. Work. To raise children. Condemn? For what? Rehabilitate 50-year-old uncle?

But to talk for almost an hour about something is necessary. And then the memories of aunts about "our mutual friends" from distant childhood, the brain will be completely demolished. And our conversation, I confess, I turned to an interesting topic. Interesting for me personally.

The fact is that all events in Ukraine today, in my opinion, should have taken place in Russia in 90. This is my deep conviction. And it happened in the one that was being killed in Russia, one thing that somehow bypasses the press and numerous observers and experts on Square. The worst thing ... What determines the end of the state, and maybe the people.

Remember Russia 90's? I'm not talking about the economy, not about culture, not about the army. I'm talking about the soul. My, your, neighbor, Russia, finally. Remember that then they tried to create with our soul? Remember the millions sitting at the TV screens with cans of water and creams. When Alain Chumak was charging ... Remember Kashpirovsky, who "lifted up legless invalids" with one pass of his hand.

How many saints, such as Mary Devi Christ and others, then appeared. How many sorcerers, such as Longu, practiced white, black, “sour-silo crimson” magic. Practically in every small town a healer spoke, who treated everything. He even raised the dead. Pay and get a certificate that you have already recovered. We believed. And do not tell me that everyone believed except you. You are clever. With higher education. And the banks with water "charged" the wife-fool. What to take with women ...

"Yes, ass with this we have." These are the first words of my interlocutor on my direct question about sects and all kinds of magicians. “I was not specifically interested, but I heard about the“ Center of the Mother of God ”, about the church I caught up with, about the“ Embassy of God ”...”. According to the source, so far this infection has not particularly touched Kharkov, and indeed the eastern regions.

I really wondered if the “era of the Chumak and Kashpirovsky” today in Ukraine? Again, "You do not feel anything, but your body is already young by 50 years. Even those who have just been born ...". And then everything is clear. Curiosity must be satisfied. As it turned out, the situation, though similar to ours, "from 90's," but, as it should be in a farce, is absurd.

Here is a record of a resident of Lviv, Igor T., which I found in one of the soc. networks. It is about the author's wife, who fell into a sect: “We live in Lviv, and she goes to the preacher in Rovno. There, to be closer to the “teacher“, her mother moved from Zaporozhye. She pulled her daughter there. "Teacher" - a man of about sixty, a good psychologist and manipulator. He says that he is the son of God, and offers a mix of vegetarianism, Christianity, yoga, the doctrine of karma and everything else. At the same time in this sect, people are forced to leave their families, convincing that their relatives are obsessed with demons. And all this is arranged as a business: the cost of the day of “enlightenment“ is UAH 300, but you need to go for at least a week. About 20 people go there, and they are increasingly inviting newcomers. “Stress-resistant“ quickly leaves the sect, there remain those who are amenable to suggestion. ”

And here is a completely idiotic project. Purely Ukrainian, but working at the level of "genetic memory." Maybe not stupid even. Sneaky, it will be more correct. I’m talking about the “Mother of God Center” of today's “flood”. That's what I found about this sect. Irina from Vinnitsa: “About three years ago someone on the train hit my mom on their first book. And then a woman called and invited her to a seminar. Mom went, bought books, it is clear that it delays her. The sect calls itself the Old Believers, but I think it’s a cover for them. ”

Do you know why I call this a sect foul? Just because they remind me of agents of funeral houses. Both those and these "live" in conditions when a person is in the deepest stress. And you can milk it to the fullest. "Subscribe" for any money. The "Mother of God Center" parasitizes on the memories of the "Soviet" life. More precisely on the old myth of the brotherhood of nations. "Let's create a single state of all Slavs and paradise on Earth" ...

And about the other sects? Someone canceled and banned Eastern religions and their substitutes? Someone opposes the church of Dognal already banned in Ukraine? Many Russians have not heard of this sect. In fact, all kinds of "reformers" are enough in any of the world religions. Dognalites oppose the traditional Greek Catholic Church.

Do you know what the Embassy of God has become in Ukraine today? Do not believe it, but today it is, in many ways, the volunteer movement of assistance to the soldiers of the ATO. If you want to help the soldiers, join the ranks of believers and God's embassy on Earth.

Subject turned nasty. The belief of a person in general is an intimate topic. And it is necessary to write about it with great regard. One word and you already offended someone. Only in this case I am not so much interested in questions of faith. I am more interested in the soul of man.

In Ukraine today there is an open war between the Christian religions. Catholicism, Orthodoxy, some Ukrainian Orthodoxy, Protestants ... We somehow forgot that Turchinov is no more and no less, as a fairly high-ranking religious leader! And it is precisely the sectarian figure! And then what conclusion? Sectarianism in Ukraine has long been a leader in politics!

Beautiful история about the revival of the people today has already turned into a story about the degeneration of the people. The theme of the confrontation between the "west" and the "east" of Ukraine is in fact not worth a damn. Today there is no confrontation. Today in Ukraine there are people who have lost their moral guidelines. Lost faith! Everywhere.

Raise the theme of "correctness" of religion will not. I always adhered to the simple truth that the old village priest once said to me. "Faith is different. God is one!" And it is for this, one for all of God, in Ukraine today, crooks of all stripes are beating. A man without faith is a living corpse.

But still more and other "parasites" of faith. Those who are for the "small bribe" can get your son, father, brother out of the ATO area. Those who can "talk to higher forces" so that a bullet or a fragment has passed your son. Those who can “kill” your relative, if you don’t “make a contribution” to any cashier right now ... But you need to write a separate article about these people.

We can talk about bad politicians many times. We can talk about the deceived people of Ukraine. We can express hope for the enlightenment of the people. But all these will be words. A lost soul cannot be a man.

In the Ukrainian people, the soul is still preserved. We see it. We feel it. But they kill this soul. Daily, hourly, every minute. And it is impossible to resist it. This is the business of each person. The personal file of each person. Stay human, save the soul or become a sliver, which floats according to the will of the waves ... Or maybe a piece of what, according to popular proverbs, does not sink ...

Ctrl Enter
Noticed oshЫbku Highlight text and press. Ctrl + Enter
We are
Results of the week. “You see, every year my friends and I go to the bathhouse. This is our tradition. ”Results of the week. "Who you are lucky, in fact, and will carry a cock, and such a bird as you, I, too, will rush!"
Military Reviewin Yandex News
Military Reviewin Google News
25 comments
Information
Dear reader, to leave comments on the publication, you must to register.