North Korea - not the caliber!

November 1 2017
29
Dear readers, I do not in any way try to claim the ultimate truth, but the longer I look at North Korea’s attempts to catch up with the United States in the nuclear arsenal, the stronger my confidence that the North Koreans have chosen not the best approach in this matter. Moreover, it is obvious that the strategic nuclear forces of the DPRK will not be able to threaten the United States either now or in the foreseeable future, and can only give the Americans reason to unleash another bloody drama on our borders.


For a start, let's see what the "DPRK has for today / in the foreseeable future" and how it can deter its enemies.

The main argument of S. Korea is long-range nuclear missiles, but how many nuclear bombs does the DPRK have? Will there be enough of them for use as a fire extinguisher for hot heads? Let's try to figure it out.

The main nuclear facility of the DPRK is the Jenben Center, located in 90 km north of Pyongyang. In the 1986 year, a gas-graphite reactor was launched there, it was his experts who considered the main source of weapons-grade plutonium (capable of producing up to 6 kg per year). The CMB of the IMEMO RAN cites data on which Pyongyang has about 2017-50 kg of weapons-grade plutonium at 60 year.

In addition to plutonium, the DPRK also produces uranium. Since 2010, a plant has been opened that can produce 2 tons of low-enriched uranium or 40 kg of weapons-grade per year. Of course, we are interested in the second.

So, theoretically, the DPRK could produce 280 kg of weapons-grade uranium. First in stories atomic bombs contained about 60 kg of this substance, modern - about 30 kg. The progress of the DPRK in nuclear warheads is unknown, so for the calculation we use the minimum value - 30 kg. S. Korea could accumulate uranium on 10 bombs.

At the same time, with 2006, the DPRK conducted 6 nuclear tests. So, the first five were either with uranium bombs or with non-hydrogen plutonium. The power of the tested bombs ranged from 20-30 kilotons of TNT. The sixth bomb, tested on September 3 2017, was hydrogen.

This means that DPRK could theoretically have 5 uranium and one hydrogen bomb.

Total: 6 nuclear warheads, one of which may be megaton class.

Problems with carriers should not arise, the number of missile tests indicates an adequate supply of missiles. 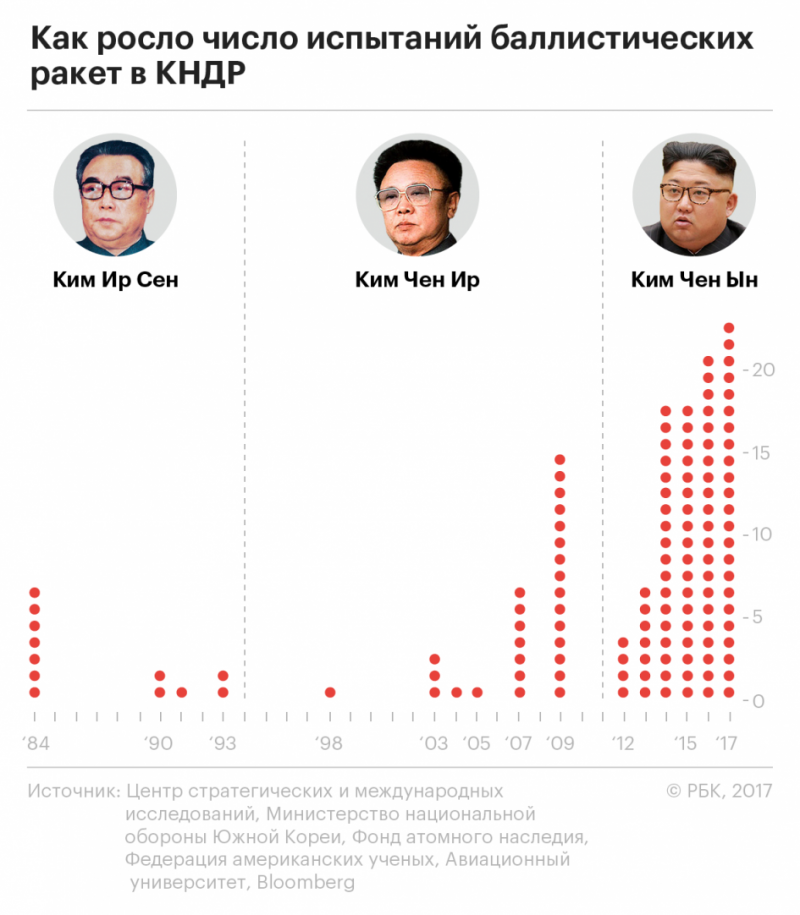 In addition to nuclear weapons, S. Korea can threaten the shelling of the South Korean city of Seoul, which is located in 24 km from the border and where 10 million people live, as well as other South Korean settlements along the border.

Here, by and large, and all. More S. Korea has nothing to restrain such enemies as the United States and Japan.

But what about the enemies? How can they fend off the "Korean threat"?

Japan has 190 PU Patriot PAC-2 and 16 PU PAC-3 (1 PU contains 4 missiles). In addition, the Japanese Self-Defense Forces have 6 URO destroyers (in fact missile cruisers) of the Congo and Atago type with a total of CWPs for the Standart family of missiles on approximately 550 missiles.

The Japanese Self-Defense Forces are armed with the Zen Standart 2 (ships), and MIM-104 (Patriot PAC-2), which are not capable of intercepting BDBD, but are capable of catching BRSM, several hundred of which from S. Korea.

The fleet of the Republic of Korea includes: 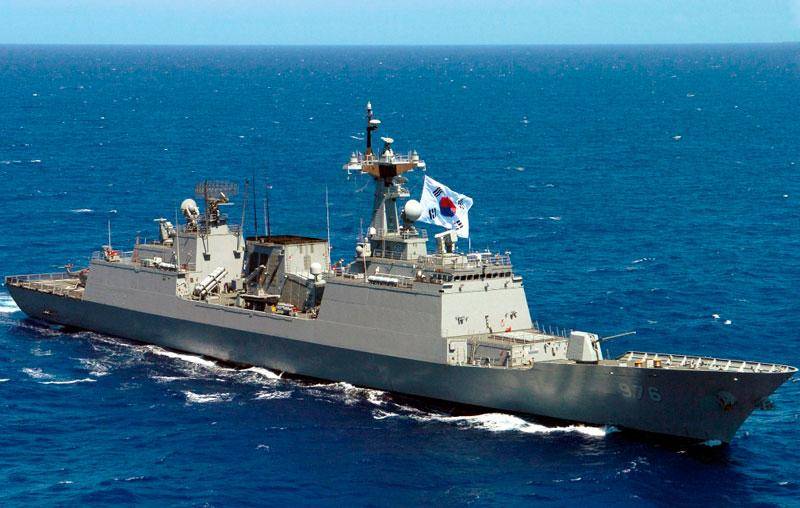 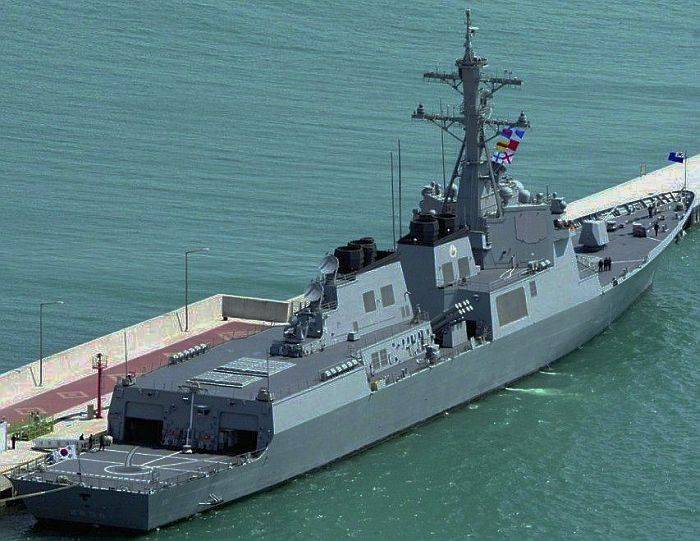 In addition, the United States has placed a number of Patriot complexes in the republic, probably Pac-3. 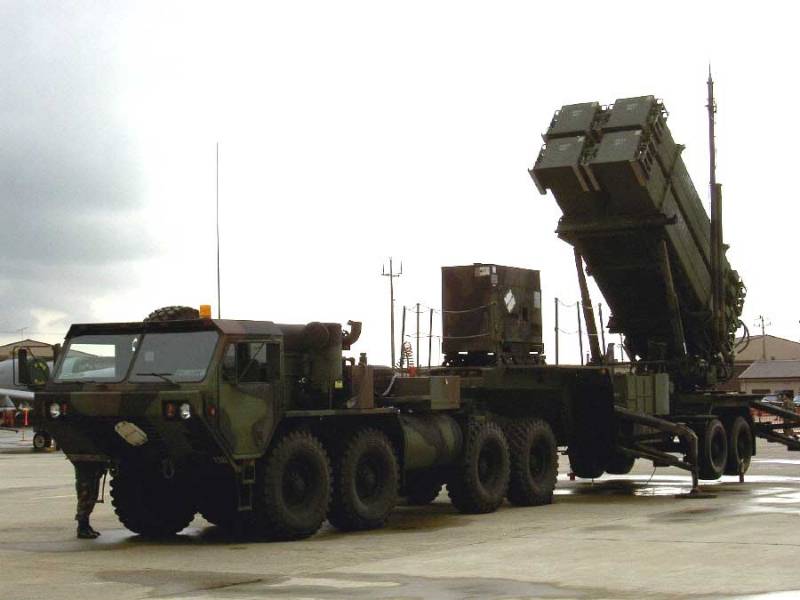 Now the main thing: the potential of the United States in the region.

America has three military bases in Korea. It:

- Osan Air Force Base, located about 50 km from Seoul. It hosts the 51st aviation fighter-interceptor wing. It is equipped with A-10 Thunderbolt II attack aircraft and F-16 light fighters. There is also the headquarters of the 7th US Air Force. All this is protected by more than 90 Patriot launchers, which can be quickly transferred to Seoul;

- US Air Force base Gyeongsang. Along with the base Osan one of the most powerful US Air Force bases on the peninsula. Located in the west of South Korea, by the Yellow Sea. It houses the 8 aircraft wing;

- Camp Humphreys. US Army Base. Already, more than 17 000 troops are deployed there.

We will not list the US bases in Japan - there are many of them there, their potential is huge, and it can quickly and widely vary.

However, the following is interesting ... Patriot, even Pac-3, as well as the shipboard standard 2 SAM, are not capable of intercepting a DBDB, but this could be a THAAD ground-based transatmospheric interceptor. And it turns out that the THAAD battery will be deployed in 2017, where would you think? - in South Korea! The first parts of the missile defense are already at the US Air Force Base in Osan. And in 2018, THAAD will be placed in Japan. Moreover, the THAAD battery is already on duty on the island of Guam, covering the US naval base and the airfield of strategic aviation from the possible attacks of North Korean ballistic missiles. 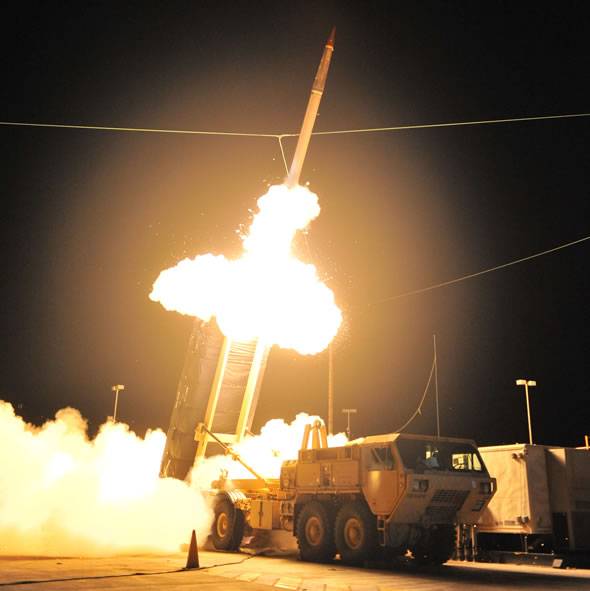 The DPRK has practically taken up the anti-missile ring, and it is quite obvious that neither the BDBD nor the BRSD or even the six nuclear warheads can penetrate such a defensive potential.

It is also obvious that the UWP of the American ships will be crammed with the latest Standart 3 over-the-atmosphere interceptors, which also does not contribute to North Korean success.

The threat of shelling Seoul is also not a panacea:

- first, Seoul has a metro total length of 560 kilometers;

- secondly, nobody canceled the counter-battery shooting. The RSZO, helicopters and attack aircraft of the Republic of Korea will not allow Seoul to be shot with impunity, the positions of the DPRK artillery are likely to be quickly suppressed.

So, the perennial question: what to do? The hero of the famous film said: “Everything is already stolen before us”, and the Koreans want to say: comrades, everything has already been invented before you. It is only necessary to turn to the experience of the state, once already solving this problem. But first, another background ...

17 July 1962, a motorcade of scientists, military and dignitaries, crossed the distant desert in southern Nevada to witness a historic event. Among them were persons such as Attorney General Robert F. Kennedy. The highlight of the program was a mysterious device called "Davy Croquet."

The installation was a recoilless gun mounted on a jeep. If necessary, it could be transported by the calculation of three people and externally looked like the most common mortar of a battalion link ... 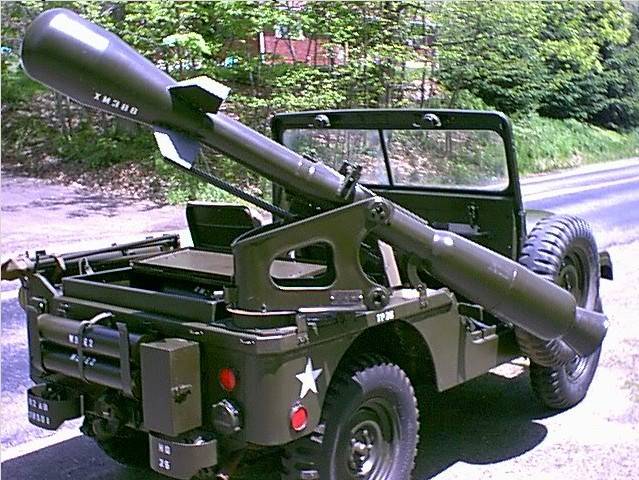 However, in reality it was the first battalion mortar in the world that fired tactical nuclear weapons!

Davy Crocket used the M388 nuclear shot with 20 tonnes in TNT equivalent. The penetrating radiation was able to kill all life in the 500 radius from the explosion, and the strike zone remained impassable for enemy troops for another day. Before you historical footage.

2 of these guns were included in the infantry and airborne battalions, mainly in Eastern Europe to counter the Soviet tank to the waves. Since 1956, 2100 units have been produced.

Similar work was also conducted in the USSR. Their crown was the creation in 70-ies of a number of tactical nuclear weapons for serial SAUs. A distinctive feature of Russian cars: shells could be used in the ACS without any modification. The enemy could not know which of the thousands of AUs is an ordinary projectile, and which one with the "vigorous loaf."

For example, for the ACS Acacia, a ZBV3 projectile with a power of 1 kt of TNT was developed, for a Tulip mortar, an active rocket mine of ZBV11 with a 2 kt capacity, and so on.

North Korea has a developed artillery. And instead of six warheads, in the opinion of the author, it would be more useful to make sixty nuclear shots for existing SAUs.

First, such an approach will make it difficult to detect "nuclear" cannons and simplify the preparation of a nuclear slap in the face: where exactly the "loaf" the enemies cannot know in advance.

Secondly, the threat to Seoul will be catastrophic: even one battery of ACS (and even one of ACS), having made several volleys “hearty loaves”, can cause catastrophic damage, not to mention the consequences of a nuclear explosion.

For the same reason, it becomes a catastrophic threat to enemy troops. Even the Americans, even with full control of the sky, cannot be sure that from any cracks in the mountains they will not be treated with a “sweet bread”.

Finally, Pyongyang can appear in a favorable light, declaring the refusal of the BDBM / BRSD instead of easing / lifting the UN sanctions. At the same time, he can leave TNW, stating that the range of its use is limited to the range of the gun shot and does not threaten absolutely anyone except the Republic of Korea. But he is not going to shoot at it first.

North Korea - not the caliber!

Ctrl Enter
Noticed oshЫbku Highlight text and press. Ctrl + Enter
We are
Situational analysis of the death of the MH17 flight (Malaysian Boeing 777), made on the basis of engineering analysis from 15.08.2014Results of the week. “In our cooperative, the board is always agreed”
Military Reviewin Yandex News
Military Reviewin Google News
29 comments
Information
Dear reader, to leave comments on the publication, you must to register.