100 years of Russian glory. Russian Imperial Army on the eve of the First World War 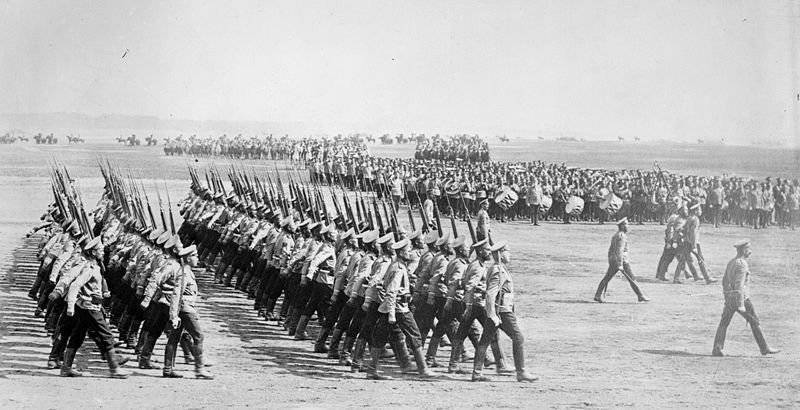 Before proceeding to the consideration of hostilities on the Eastern Front during the First World War, it is necessary to recall / clarify / clarify / tell (underline) what the Russian Imperial Army represented in this period.

Many sources (both imported and domestic) say a lot about the fact that before the First World War the Russian Imperial Army was the most numerous, but the most backward in terms of armament in Europe.

We categorically disagree with this interpretation of the situation, and we have to say the following:

After the defeat in the Russian-Japanese war, it became clear that the army needed reform.

From 1905 to 1907, the events of the First Russian Revolution took place in the country, and there was, to put it mildly, no time for reform. When the passions subsided, it is time to think about the army in order not to allow defeats like the Russian-Japanese war, although we put the military loss under some doubt. Here, rather, there was a political defeat.

It is also worth noting that during this period the creation of the General Directorate of the General Staff took place, which was separated from the Ministry of War.

The first transferred all the functions and questions of preparing the country for war. The second left administrative part and the economy. 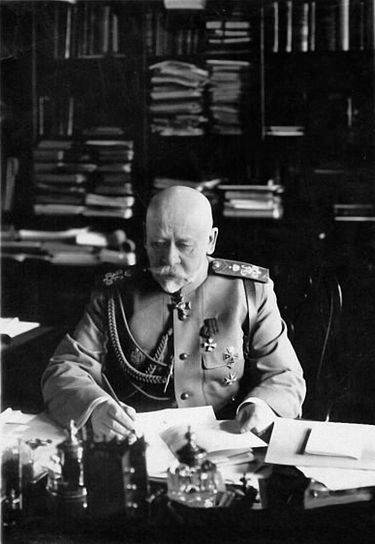 In parallel with the military reform, it was necessary to carry out and accelerate the development of industry.

It is no secret to anyone today that at that time Russia was forced to place a significant part of orders for the production of armaments abroad, as its capacities were not enough.

And it's not about the fifth column, as some people think, but about the specifics of historical development. Yes, before the First World War, Russia fed bread to all of Europe, agriculture was the flagship of the economy. Although the industry was developing by leaps and bounds, it was far behind the leading countries of Europe.

The main activities of the new minister include the following:

- the creation of automotive parts;
- The Imperial Air Force (although there is a great merit of one of the relatives of Nicholas II, but this is in detail in the relevant article);
- the creation of military counterintelligence;
- Introduction of machine-gun teams in infantry regiments and squadrons in corps;
- disbandment of reserve and fortress (garrisons of fortresses) units, due to which we managed to strengthen field armies, the total number of corps grew from 31 to 37.

The necessary changes were carried out in the officer corps, as part of it did not correspond to the command positions they held.

Hundreds of officers were dismissed due to their incompetence. Such a phenomenon, meaning incompetence, was inherent not only in the Russian army of that period, but also, for example, in the British army. In Great Britain, even during the war, positions and titles were received by descent, and not by skill and merit. We began to fight this before the start of hostilities.

The tsarist army was a fairly large organized group of people with a huge mobilization reserve by the standards of the time.

The ground forces consisted of a standing army and militia.

The standing army, in turn, was divided into the regular army and reserve, the Cossack troops and foreign units.

In peacetime, the army numbered almost 1,5 million people, for 45 days it could be increased to 5 million people (this happened in August 1914) for XNUMX days.

Men were liable for military service at ages from 21 to 43.

At that time, the 3 of the year served in the infantry, which allowed them to constantly have more than 60% of the personnel of the lower ranks of the 2 and 3 years of service, that is, sufficiently trained soldiers for active combat operations.

At the expiration of the term in active service in the ground forces, the 7 man of years was in the reserve of the 1 level, 8 of years - the 2 level.

In the Russian Empire at the beginning of the twentieth century there lived 170 million people, so they called not all of the draft-age citizens, but about half. The rest who did not serve, but was by all criteria fit, were recorded in the militia. Most of the men between the ages of 21 and 43 years were enrolled here.

The militia was divided into two categories.

The first category - those who in the event of war will have to replenish the army.

The second category is men who are not fit for military service for health reasons, they were recorded in battalions (or squads) of the militia. In the event of war, it was supposed to form 640 similar squads.

Also, the Russian army was accepted on a voluntary basis, which gave some privileges. You want to serve and good health - welcome.

It is worth noting that representatives of not all nationalities fell under military conscription. They were Muslims of the Caucasus and Central Asia (they paid a special tax), Finns, small peoples of the North.

However, the mountaineers from the Caucasus still could get to the effective service, thanks to the "non-native troops" (irregular equestrian connections, formed on a voluntary basis). 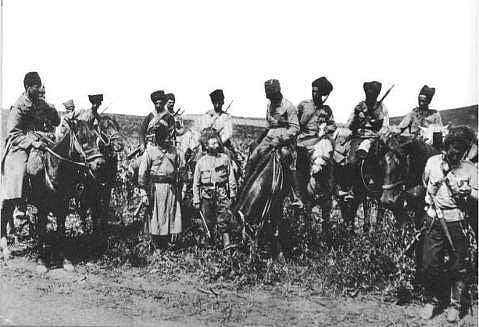 A separate military estate was the Cossacks, but we'll talk about this in a separate article.

In peacetime, the territory of the Empire was divided into 12 military districts, led by the commanders of the troops: St. Petersburg, Vilna, Warsaw, Kiev, Odessa, Moscow, Kazan, Caucasus, Turkestan, Omsk, Irkutsk and Priamur.

In each infantry regiment of the 4-x battalion (16 company) composition of the state from 6 in May 1910, there was a machine-gun team with 8-st Maxim machine-guns. In wartime, the regiment should have been a 3776 man. Our direct opponents - the Germans, had six machine guns (7,92 mm machine gun MG08), on the 12 company regiment.

The main armament of the infantrymen was the 7,62-mm rifle of the Mosin system arr. 1891 of the year. Rifles produced in dragoon, infantry and Cossack versions. In the 1910 year, due to the introduction of a new cartridge, modernization was required. Thus, a new curved aiming plate of the Konovalov system was introduced, which compensated for the change in the trajectory of the bullet.

Appearance of various modifications of the Mosin rifle.

Despite the fact that the rifle was produced in three armory factories, factories still could not cope with the required production volumes. Therefore, orders were forced to place in the USA and France. This significantly increased the cost of producing rifles, but there was nowhere to go.

As already mentioned above, a machine-gun command was introduced into the infantry regiment. This was a significant step to increase the firepower of the infantry units, since before that the machine guns were bought mainly by the naval department, and they were intended to be placed in fortresses. With a gun carriage and a weight of 250 kg, this was not surprising. BUT! During the Russian Japanese war, the Russian army was able to evaluate the effectiveness of this type of weapon and the severe need for the presence of infantry. 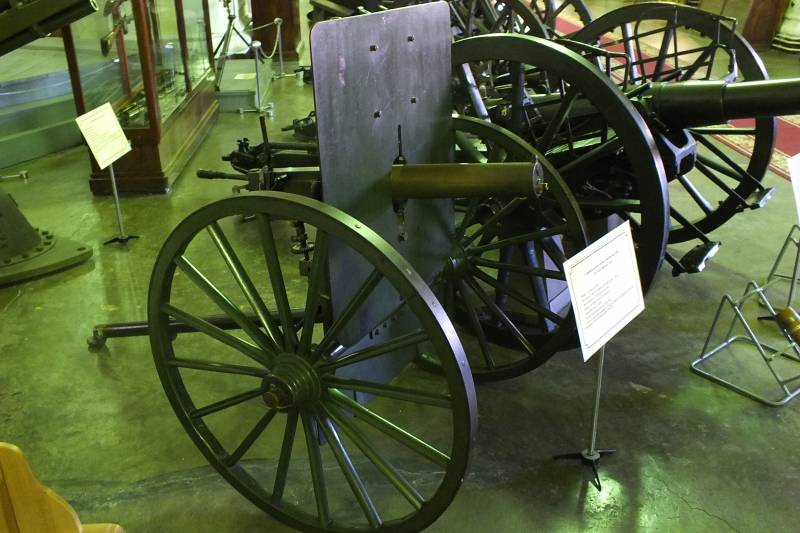 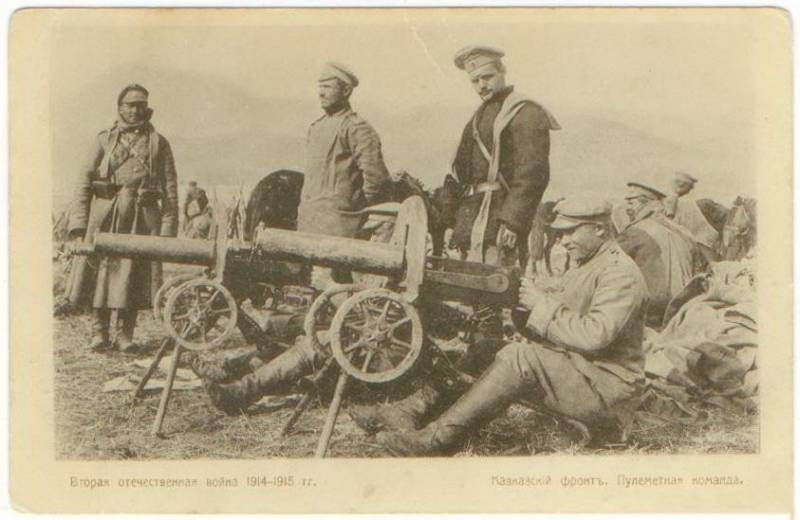 The machine gun was upgraded, and in the infantry variant, the 60 kg strand began to weigh. That significantly increased its mobile properties.

Starting from 1914, armored cars were actively introduced into the Russian army.

The first field radio stations, created by Popov and Troitsky, appeared in the armed forces as early as 1900 year. By 1914, radio stations became, if not a competitor to fixed-line telephony, then an assistant.

By 1914, “spark companies” were created in all corps, the world's first parts of EW, born in the Russian-Japanese war and received further recognition and development.

The offensive was considered the main type of hostilities, but much attention was paid to defense. Offensive infantry used intervals up to 5 steps (more rare battle formations than in other European armies).

It was allowed to creep, move by rushes, advance by detachments and individual soldiers from position to position under the cover of comrades. They demanded that the soldiers dig in, not only in defense, but also in offensive operations.

Studied fight, action at night. The cavalrymen were taught to act not only on horseback, but also on foot.

Although the work on reforming the army was in full swing, and there were significant advances, it was not without negative moments.

Part of the officer corps resisted changes, the dependence on arms supplies by foreign firms had a negative effect, little attention was paid to the preparation of reserves, only the Cossacks regularly conducted inspections and exercises.

The militia was not trained enough or had no training at all. Subsequently, the neglect of the development of heavy artillery (but about this in a separate article), and the hope for a quick war (hence the insufficient supply of projectiles) will have an impact.

The idea of ​​building a large number of railways in the west of the empire was not fully implemented, which during the war would accelerate the mobilization, transfer and supply of the army.

But here we also depended on Western "friends", do not be surprised with quotes, we wanted to take a loan for this event from England. That same country, which almost 10 years ago helped the opponents of Russia.

Wars always start unexpectedly, and it can be said that the Russian Imperial Army was ready for war, not by 100%, but ready. But why she suffered defeat in a number of major battles - a topic for another conversation.

In any case, even despite the fact that the reforms in the Russian army were not brought to the end, it was far from the army that was fighting near Mukden and at Port Arthur. Unpleasant lessons were learned, and RIA embarked on the path of evolution.

In the next article, we will take a closer look at the weapons and ammunition of the infantryman of the Russian Imperial Army arr. 1914 of the year.

Sources of
Cornish N. Russian Army 1914-1918
Samsonov A. The Russian Imperial Army and the Strategic Plan of Russia on the Eve of the First World War

Ctrl Enter
Noticed oshЫbku Highlight text and press. Ctrl + Enter
We are
Chernobyl notebook. Part of 3The hunt for the Blackbird
Military Reviewin Yandex News
Military Reviewin Google News
45 comments
Information
Dear reader, to leave comments on the publication, you must to register.