Does Ukraine need a new day of liberation from fascism? 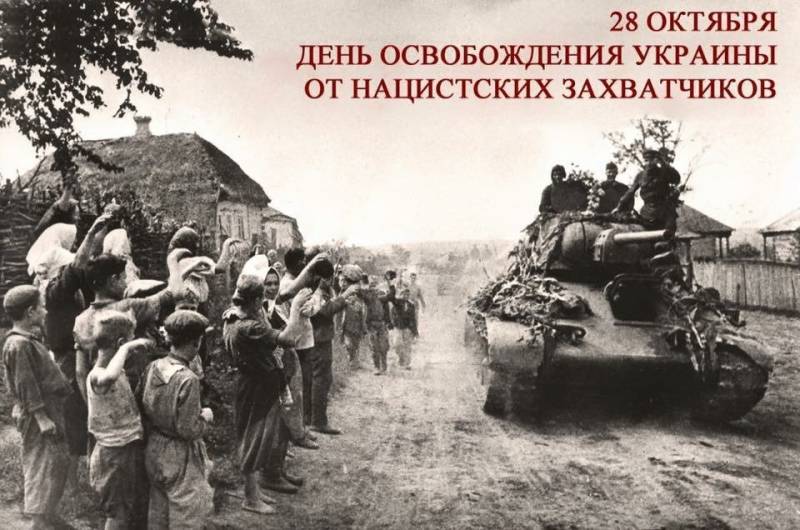 October 28 1944, the whole territory of Ukraine was liberated from the Nazi invaders. This happened after the First and Fourth Ukrainian Fronts, united, liberated Transcarpathia from the fascists.

This date has always been very significant for the veterans of the Great Patriotic War, and for those citizens of Ukraine who have not forgotten history. In 2009, the day of October 28 was officially declared a national holiday. Announced, despite the fact that even then the “orange” regime of Viktor Yushchenko was in power. In those years, there was already an active degeroisation, as well as the glorification of the very dubious "heroes" - Bandera. But society then was able to resist the imposition of frankly pro-fascist ideas. The result of this was the recognition of the Day of the liberation of Ukraine from the fascist invaders.

Now this holiday is like a bone in the throat of the new “orange” authorities (the orange color of which is more and more like brown every day). Of course, the regime of Mr. Poroshenko can cancel the celebration of this date. But this will mean that he will finally sign off that the Ukrainian authorities are the heirs of the Nazis. True, a lot has already been done for this — the notorious “decommunization” has become the most disgraceful abuse of the true Heroes, including the Heroes of the Great Patriotic War.

The ruling Ukrainian regime has found, as he believes, a “way out”: try to redraw the holiday. To separate the liberation of Ukraine from the general popular struggle that was waged by the whole Soviet Union against the fascists. Try to imagine that the Ukrainians themselves liberated their land. Yes, and blasphemous to ascribe to this, what, they say, today "the people are faced with a new aggression, but already from Russia."

But such attempts look pathetic. Therefore, Mr. Poroshenko, who made such loud statements in previous years, this time limited himself to participation in laying wreaths at the Tomb of the Unknown Soldier in Kiev (still surviving from “decommunization”).

Unfortunately, the opposition of the junta is weak and intimidated, because its large-scale celebration of this date did not work out: few dared to go out to lay flowers at the monuments outside fake, hypocritical official events. But such symbolic resistance is a great value today.

But on the eve of the Day of the liberation of Ukraine from the fascists, there were disturbing reports from the Donetsk People's Republic, which came under fire from the Ukrainian side. Residents of Donetsk wrote that 27 of October in the city could be heard such loud volleys, as three years ago, in 2014. One of the civilians, a 25-year-old young man, died as a result of shelling in the village of Trudovskie (west of Donetsk) from a shrapnel wound. That’s actually the way Ukrohunta celebrated the Day of Liberation from the Nazis - with a fascist shelling of a peaceful city!

In addition, a statement was made by the Deputy Head of the OSCE Special Monitoring Mission Alexander Hug about the escalation of tension in the Donbas. "The parties did not withdraw forces and means, we see them in close proximity along the line of contact. This not only leads to ceasefire violations - we recorded 3286 such violations last week - but inevitably leads to an increase in the number of violations in the future. As experience confirms and as they say, our warnings are in each case - escalation is inevitable", - he said.

More and more often, there are calls from the Ukrainian side to deal, finally, with the DPR and the LPR (and even with the Crimea). And this is against the background of more “peaceful” appeals - to strengthen the international presence in the Donbas.

The notorious Dmitry Yarosh recently broke out with fantasies that international peacekeepers will block the border of the Republics with Russia, and then Ukraine will clean the Donbass by SBU forces. "They have a good experience in eliminating not one enemy of Ukraine, and I think that, despite the presence of peacekeepers, it would be possible to arrange such a sweep, that every monster who committed crimes against Ukraine with weapons in hand, it would be neutralized“- such revelations he gave in an interview.

A statement worthy to be evidence at the new Nuremberg Trials - against the new fascists! It is as if Yarosh does not realize that in his own words “Despite the presence of peacekeepers ...” he actually shows that Ukraine does not care about the world community, international law, or various kinds of agreements.

It is about such a scenario - to arrange a large-scale sweep of recalcitrant, “worthy” of the fascists, - many representatives of Ukrohunts dream.

There is, however, bad luck. Despite the fact that the opposition is practically crushed by brutal power methods, still not everyone shares the view that a new large-scale war is necessary. Less and less willing to personally engage in monstrous sweeps.

And here are the methods by which they are now being recruited into the Ukrainian army. In Kiev, in one of the nightclubs, there was a merry party, when the National Police suddenly appeared there. All laid face down on the floor, including girls. “They didn’t stand on ceremony with the guys at all, the police jerked as best they could, using both legs and batons,” one of the participants of the party said on her blog on Facebook. And the police later said that "a person 32 was identified who evade conscription for military service." "Uklonistov" was taken to the military enlistment office.

What to do? Guys want to live and have fun, not to become punitive. So we have to collect "warriors of the ATO" at nightclubs ...

And in Konstantinovka (Donetsk region) “cleaned up” by local authorities, the locals showed how they relate to the monuments that they managed to erect by the punishers. He was destroyed for the second time. The first time this "monument" was damaged immediately after installation. He was restored and put round the clock security. But during the changing of the guard, all the same, the residents managed to express their attitude towards the murderers ... The occupation authorities only need to increase security.

Loud statements about the need to clean up the Donbass are heard not even from Poroshenko himself, who prefers to keep silent once more, but from his associates on the Maidan. Sometimes these statements are not only not inferior to Hitler’s in their cynicism, but also superior.

And if the junta tries to nevertheless implement its plans for the DPR, the LPR and the Crimea and go on to a large-scale conflict - well, perhaps there is no other choice but to organize a new Liberation Day from Fascism in Ukraine ... True, you always want to hope for that common sense will prevail, that it will be possible to prevent war and to avoid new victims. But it seems that common sense has not spent the night in Kiev's power structures for a long time.