You didn’t wait for us, and we came to a leg: the US is preparing to attack Abu Kemal 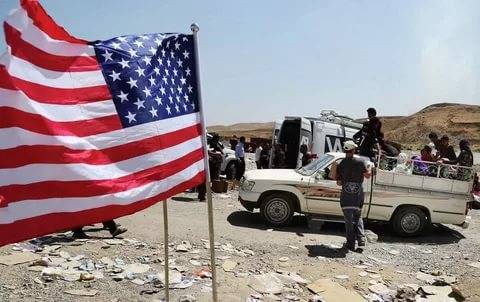 The closer the Syrian government forces are to victory over terrorist groups, the more participants in the conflict want to share the upcoming success with Damascus. Some do, and they expect to assign this success ...

On Saturday, it became known that the anti-terrorist coalition led by the United States is planning an offensive against the Syrian city of Abu Kemal in the province of Deir ez-Zor. This was announced by the official representative of the allied forces, Colonel Ryan Dillon.

According to him, at the moment it is necessary to “consolidate the successes achieved by the Syrian democratic forces in the Omar oil fields and continue to clean the areas that are still the territory of the Islamic State (banned in Russia) ... after which an operation should be prepared to free Abu "Kemal."

It is noteworthy that this statement was actually made on the eve of the attack of the Syrian army on this settlement, which, according to the latest information, is the only stronghold of extremists in the above region. If we take into account that before this official Damascus, with the support of the Russian Aerospace Forces in less than a month, freed almost the entire province of Deir ez-Zor from Islamic radicals, causing the latter enormous damage, a reasonable question arises: why did the United States decide to act in this area when were there only a few days left before the final victory of the government forces, and there are simply no prerequisites for the reverse situation?

Presumably, this state of affairs means Washington's final disclosure of its plans. Since 2014, when the international coalition launched the so-called anti-terrorist operation, the White House and the Pentagon have unanimously argued that the main and only goal of the allies in Syria is the destruction of international Islamic organizations. However, the results of their activities indicated the opposite. Suffice it to say that for a year of undivided rule in Syrian territory, right up to the arrival of the Russian military in the Arab Republic aviation, the scope of the actions of the radicals has grown to unimaginable proportions.

Now it became obvious that the long-term American tactics to overthrow the current Syrian leadership through the full support of the so-called moderate opposition, often acting hand in hand with terrorist organizations, failed. In this case, the US had no choice but to try to penetrate into the paradigm of successful actions of these very Syrian authorities. However, they didn’t give up their original ideas overseas, but instead of outspoken thugs, it was decided to concentrate on interaction with the armed Kurdish troops. However, the old ties were apparently preserved, otherwise how to explain the active promotion of the Kurdish self-defense detachments in the direction of Abu-Kemal and their occupation of the strategic positions of the "Islamic State" practically without a fight.

In parallel with this, attitudes are coming from Washington, but it is not clear to whom it is addressed that Syrian President Bashar Assad has no place in the post-war government of the country, and his family’s rule has come to an end.

The above facts indicate that the United States categorically does not want to be on the side of the losers on the eve of the end of hostilities. But there was no place for them in the company of winners, and therefore the opportunity to seize the region rich in hydrocarbons seems to the White House the only chance to sit at the table of the upcoming talks regarding the post-war structure of Syria.

Reminds blackmail? Well, except that just a little ...

Ctrl Enter
Noticed oshЫbku Highlight text and press. Ctrl + Enter
We are
Dare elz-Zor: to whom glory, to whom is shameWhat you didn't want to know about England
Military Reviewin Yandex News
Military Reviewin Google News
21 comment
Information
Dear reader, to leave comments on the publication, you must to register.