Objective number one: the West again chemites with accusations against Assad 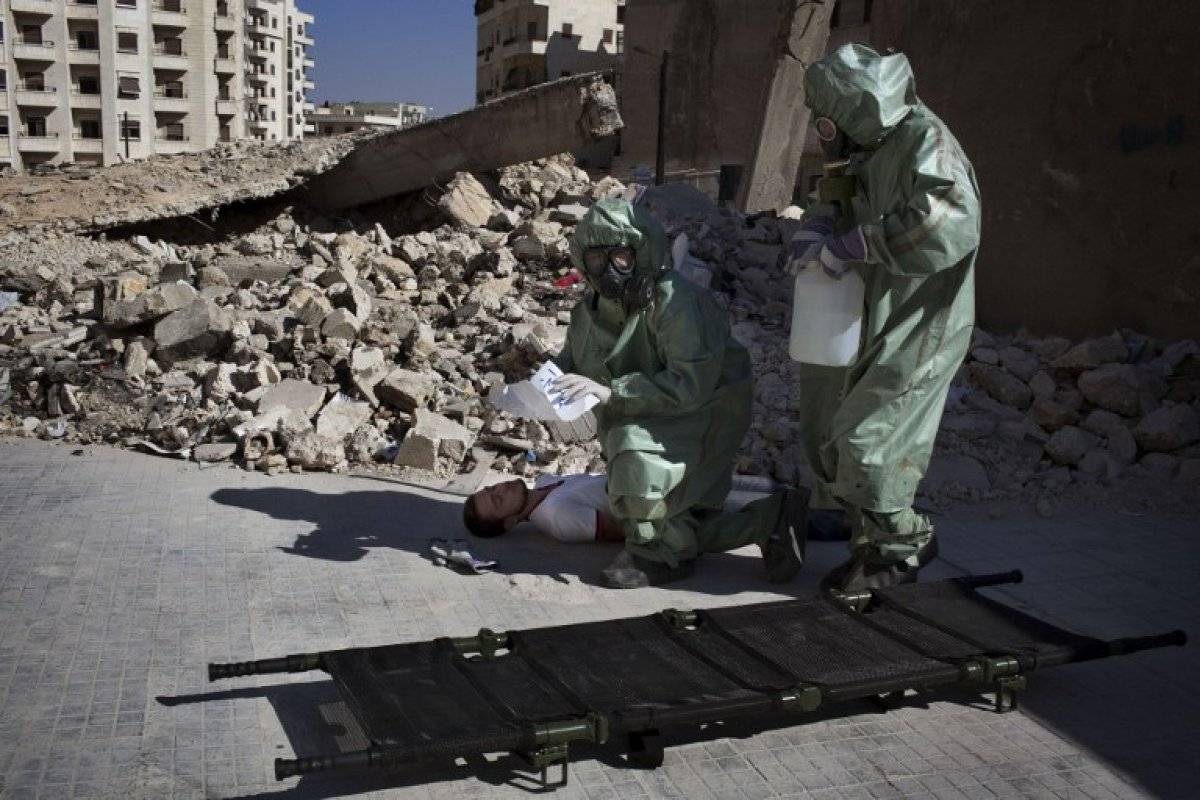 The American establishment has once again intensified. Overseas, they anticipate that the military operation in Syria to combat terrorist groups is nearing completion, and they are puzzled as to quickly arrange for Assad to resign. It seems that this is why, on the one hand, we witnessed, on the one hand, Tillerson’s politically correct statements regarding the future “role” of Assad in Syria and the hysterical conclusions of Ms. Hayley in the UN, who accused Damascus of using chemical weapons with an air strike on the city of Khan-Sheikhun 4 April.

We must pay tribute to the perseverance with which American politicians are trying to impose their will on the Syrian people. The more obvious the success of the government forces on the battlefield, the louder the accusations addressed to the President of the Arab Republic. There is nothing new to come up with overseas, so the arguments are the same - “the murderer of women, children and innocent civilians who attacked people with gas” (Head of the State Department press service Heather Nauert during the regular briefing for journalists - author's note).

Apparently, an old record about the use of chemical weapons by the Syrian troops in the settlement of Khan-Sheikhun creaked. The day before, the United States Permanent Representative to the United Nations, Nikki Haley, hysterically about this. Based on the indictment at the time of the still unpublished report of the UN Commission and the Organization for the Prohibition of Chemical Weapons (OPCW), she laid responsibility for the use of toxic substances in Idlib province 4 April. Earlier, evidence against humanity in Syria was spread by pseudo-human rights organizations, such as the White Helmets.

The version of the provocation planned and implemented in advance by the terrorist organizations 4 in April in Khan-Sheikhun is unpopular in the West, despite the fact that the Pentagon acknowledged the fact that Djabhat al-Nusra had manufactured and used chemical weapons. At the same time, warehouses with barrels of sarin and chlorine-based ammunition are predominantly located in the vicinity of Idlib and Hama, where a full-scale conflict developed between the rival groups Ahrar al-Sham, Dzhebhat al-Nusra and ISIL. At the same time, according to Syrian intelligence, in the settlements of Almagara and Alzuya of the province of Idlib, tear and poisonous substances were supplied to the militants.

However, in American society it is not customary to ponder the question of where toxins could suddenly appear in Syria, the destruction of which was confirmed at the beginning of last year by the OPCW. Even if the United States suddenly lost sight of or did not give due importance to the official statement of Ahmet Uzumcu, the general director of this organization, it is logical to assume that Assad is unprofitable to use agents against civilians. Government units, having an advantage over the enemy in numbers and military equipment, successfully advanced and moved forward without any chemicals. Therefore, it is true that the victor’s laurels in the Syrian armed conflict will go to Assad, the government forces and their allies.

Of course, Washington is not satisfied with this situation on the political map. First, profitable US bloody chaos, which almost 7 years spread by the hands of radical groups, calms down. On the other hand, there are no forces of the so-called international coalition in the list of the main contenders for victory.

The insignificant results of the brothers in arms in Syria tried to level the American State Department Tillerson, who, while speaking, recognized the share (!) Of the success of the Russian HQs in the destruction of the militants, did not forget to mention the effectiveness of the actions of the Western allies, and at the same time the official position of the American bosses regarding legitimate authority in Damascus.

Despite military successes, overseas still do not see the “role of Assad” in the future of Syria, doubt its political authority, and do not hide the fact that at the moment the Americans are puzzled over how to end the rule of the al-Assad family.

This is the main reason for the irritability of Mrs. Haley in the UN and the laudatory odes of State Department Tillerson to the pathetic international coalition.

Ctrl Enter
Noticed a mistake Highlight text and press. Ctrl + Enter
We are
About Stalin and KhrushchevWhat you didn't want to know about England
6 comments
Information
Dear reader, to leave comments on the publication, you must to register.