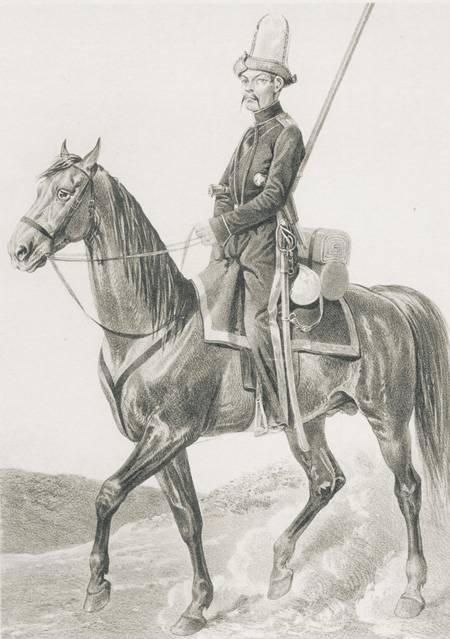 This year marks the 460 anniversary of the completion of Bashkiria’s voluntary entry into the Russian state, which began after the conquest of the Kazan Khanate by Russia in 1552 and stretched for several years - up to the 1557 year. In 2019, the Republic of Bashkortostan will mark the centenary of its creation, and the anniversary events in the republic are already beginning. One of the terms of the treaties of the Bashkir tribes with John IV the Terrible, in whose reign Bashkiria became part of Russia, was the military service of the Bashkirs to the Tsar. And since then, Bashkir warriors have become part of the Russian military storiesparticipating in many wars and campaigns of the Russian army. The need for the military use of the Bashkir batyrs prompted the Russian state to eventually form a whole irregular army of them and Mishars, thus streamlining the former military organization of the Bashkirs. It seems to the author that on this anniversary year for Bashkortostan it will be interesting to recall the history of this unique army for our country.


BY TYPE OF COSSACK TROOPS

The Bashkir-Meshcheryaksky (Bashkir-Misharsky) army is an irregular army formed by the Cossack type in Russia at the very end of the 18th century by Emperor Paul I (1796 – 1801). The army was formed from Bashkirs and Tatar-Mishars, a subethnos of Tatars of the Middle Volga and Ural regions, speaking the Mishar dialect of the Tatar language and residing both then and now in the territory of the modern Republic of Bashkortostan and the vast adjacent territories of the neighboring Russian regions. Many of these territories along with the territory of modern Bashkortostan and, of course, the Orenburg region in the XVIII – XIX centuries were part of the Orenburg province, which was the frontier before the beginning of the large-scale Russian conquest of Central Asia in the second half of the XIX century and often referred to unofficially in literature and in common Orenburg by the edge.

In the XVI century, the Bashkirs voluntarily form part of the Russian state. The terms of entry were as follows: the Bashkirs retained the patrimonial right to the land, Islam and local government. Instead, they had to pay tribute and carry on military service. In the reign of Empress Anna Ioannovna (1730 – 1740), the Orenburg Territory and the Orenburg Border Line are formed. The Russian government actively attracts not only regular, but also irregular troops to protect it. Initially, the Cossacks carried the border service on the Orenburg line, but gradually, by the middle of the 18th century, Bashkirs were brought to military service on the line, who, according to the schedule approved in 1755, were annually sent to 1969 people. At about the same time, other local peoples began to engage in military service on the line: Meshcheryaks (Mishars) and Kalmyks.

The emperor Paul I, who ascended the throne in 1796, carries out a serious reform in the administration of the Bashkirs and mesheryami (Mishars). 30 January 1797, the Bashkirs and Mishars were transferred to the military department with subordination to the military governor, and 10 on April 1798 introduced the cantonal control system. It was created 11 Bashkir, 5 Mishar cantons and 5 cantons of the Orenburg Cossacks. The cantons had no special names, they were distinguished by their serial numbers. The cantons were divided into yurts or teams. At the head of the cantons were canton commanders, at the head of the yurts - the yurt elders, subordinate to the first. Both those and others were appointed from representatives of the Bashkir and Tatar feudal elite. In total, Bashkirs were obliged to annually place 5413 people in the service. One exhibited on the line was almost at the 4 yard. Although Bashkirs were officially listed as “people” and not as troops, in reality, the last name, which generalized Bashkirs and Mishars, was instilled, so the army created from them was called Bashkir-Mescheryak, as both these people carried the same linear service and had the same structure. 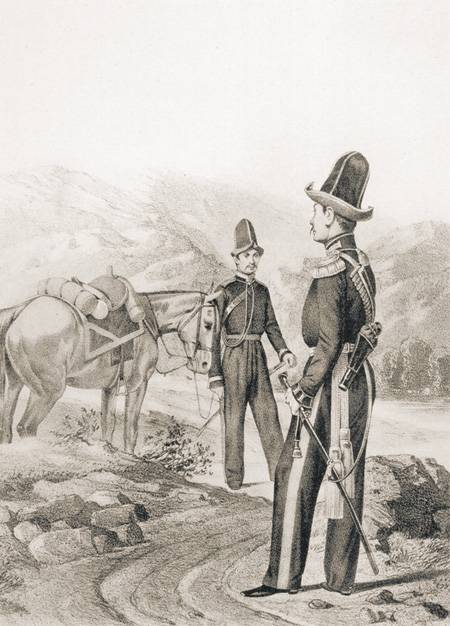 The main task of the Bashkir-Mescheryak army was, along with the Orenburg and Ural Cossack troops and units of the regular Russian imperial army, to protect the Orenburg line and internal service, mainly in the Orenburg province, which for the most part included modern Bashkortostan. However, at the beginning of the 19th century, the regiments of the Bashkir-Meshcheryaksky forces were also brought in for external service and began to take part in the wars that were then fought by the Russian Empire. For the external service, the first two regiments were formed in the 1811 year. After the beginning of World War 1812, the formation of Bashkirs and Mishars of new regiments begins. They were formed 20, and the Bashkirs and Mishars most actively responded to the call of the authorities to join these regiments and enrolled in them in droves. Considering the specifics of the light irregular cavalry, the command of the Russian army actively used the regiments of the Bashkir-Mescheryak army in partisan actions that were deployed in the rear of the Great Army in the second half of 1812. It was there that the Bashkirs and the Mishars achieved great success in the hostilities and gained undiminished fame. Subsequently, the regiments of the Bashkirs and Mishars went along with the Russian army all the way from the Russian border to Paris.

However, already in the course of the participation of the Bashkir and Meshcheryak regiments in the Napoleonic wars, it became clear that they, by the standards of that time, have low combat effectiveness due to their backward weapons and outdated tactics. In the clashes on the Orenburg line with the steppe men, armed and fighting about the same as the Bashkir-Mescheryak army, it was fully combat-ready, but it was very difficult for him to fight with the European troops, especially in open battle, despite all courage and bravery Bashkir and Meshcheryk warriors. In essence, the Bashkir-Meshcheryak army was the real medieval army at the end of the XVIII - beginning of the XIX centuries - at the very height of the modern era!

The warriors of the Bashkir-Mescheryaksky army carried military service with their weapons. It was very diverse, with cold weapons being actively used - swords and pikes. In the role of small arms, they often used bows and arrows, quite archaic at the end of the 18th - first half of the 19th centuries. There were Bashkirs and Mishars and guns. Since each soldier was in service with his weapon, the Bashkir-Mescheryak army did not have a precise regulation of the types of weapons used and even more so - their samples and tactical-technical characteristics.

Uniforms and equipment, as well as weapons, each Bashkir and Mishar had to buy at their own expense, so there was no strict regulation of not only weapons, but also uniforms and equipment. As far as we know, there was no provision for a special military uniform in the Bashkir-Mescheryak army, so it can be assumed that the uniform of the ranks of this army was close to the national everyday clothes of the Bashkirs and Mishars.

After the end of the Napoleonic wars, the Bashkir-Mescheryak army continued to carry the border service on the Orenburg line. At the beginning of the 19th century, there were thousands of irregular troops serving there. In quantitative terms, they were presented as follows: 10 thousand Orenburg Cossacks, 2 Stavropol Kalmyk, 400 thousand Bashkirs and Mishars. As you can see, most of the irregular border guards were made up of the latter.

The military-technical backwardness of the Bashkir-Mescheryak army, in fact, its medieval weapons and tactics, forced the authorities from the beginning of the 19th century to think about its reforming. The reform projects are a separate and very interesting topic that is being developed today in academic circles by the Ufa military historian Ramil Nasibullovich Rakhimov. 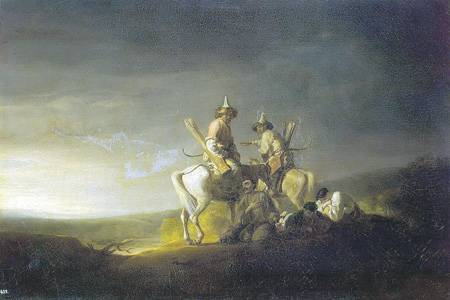 On the whole, it is possible to trace certain trends in the development of projects for reforming the Bashkir-Mescheryak army. Over the course of 30 years, 10 conversion projects have been proposed. Conventionally, they can be divided into two groups. The first is projects that offer to create an army identical to the Cossack troops. These are the projects of Peter Kirillovich Essen, Peter Aleksandrovich Tolstoy, Nikolai Petrovich Beklemishev and Vladimir Afanasyevich Obruchev. The second group consists of projects that offer to keep a smaller part of the Bashkir-Mescheryaksky army in a martial state, and a large part to pass to the civilian department. These are the projects of Pavel Petrovich Sukhtelen, Viktor Pavlovich Kochubey and Vasily Alekseevich Perovsky. Such inconsistency was associated with the absence of Emperor Nicholas I, in whose reign (1825 – 1855) most of these projects were proposed, a stable point of view on this issue.

Despite the military-technical backwardness of the Bashkir-Meshcheryak army, its low cost, since the military mostly acted on duty at its own expense, made it quite suitable for the border service on the south-eastern borders of Russia and participation in the combat operations of the Orenburg Corps troops against Central Asian States, given that the latter’s armies were then no less retarded in military-technical terms. Bashkir warriors also participated in the well-known campaign of the Orenburg Governor-General Vasily Alekseevich Perovsky against the Kokand fortress Ak-Mosque, its successful assault and capture by Russian troops in the summer of 1853. During the years of the Crimean War 1853 – 1856, parts of the Bashkir-Meshcheryak troops were sent to the Baltic region, where they participated in covering the north-western, Baltic regions of Russia.

By the middle of the 19th century, it had finally become clear that the Bashkir-Mescheryak army in the form in which it was then was completely and irrevocably outdated. His fighting ability was still rated low. This inclined the authorities to abolish it. At the same time, they hesitated about whether or not to do it anyway. It was clear that with the transfer of the Bashkirs to the civil estate there would be inevitable trials of land. In addition, the Bashkir-Mescheryak army was a source of free labor in the Orenburg region, especially in the 30 – 50-ies of the XIX century, which, of course, was very beneficial to the authorities. Yes, and the governor-generals of Orenburg were prestigious to have subordinated several irregular troops, including the Bashkir-Mescheryak army, which raised their status and favorably distinguished them from other governor-generals of the Russian Empire.

But the systemic sociopolitical crisis after the defeat of Russia in the Crimean War caused the need for a radical transformation of all spheres of the Russian state, including the military sphere. The new Russian emperor Alexander II (1855 – 1881) begins the policy of the Great Reforms, which also affected the army.

At this time, Russia begins a large-scale conquest of Central Asia, and the Orenburg province soon turns from the border into the inner province of the Russian Empire, and, therefore, now it does not need border protection. That is why the Orenburg line was abolished then. All the above factors definitively predetermined the fate of the Bashkir-Mescheryak army: soon after the Crimean War, it was abolished, and the Bashkirs and Mishars were turned into a civil class.

The history of the emergence and existence of the Bashkir-Meshcheryaksky army has many glorious pages and, I think, needs further research and understanding. It is a vivid and interesting episode in the history of Bashkiria and the Orenburg Territory, and with them the whole of the Southern Urals.

Ctrl Enter
Noticed a mistake Highlight text and press. Ctrl + Enter
We are
Bashkir army of the Russian EmpireEducation Orenburg Cossack troops
52 comments
Information
Dear reader, to leave comments on the publication, you must to register.