Black Sea Shipyard: development and decline at the beginning of the 20th century

October 31 2017
8
History and the fate of the Black Sea Shipyard is inextricably linked with the history of Russia. The decline of Russian statehood has always led to the destruction of the shipbuilding industry. 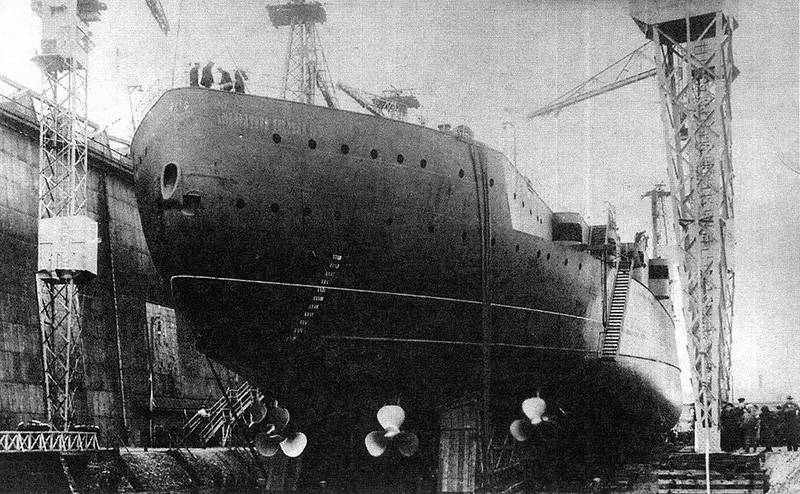 On the eve of the Russian-Japanese war, the plant’s workload was perceptibly high: for example, water bots were built for Vladivostok and Port Arthur. For the cruiser “Kagul” under construction, steam engines were manufactured with an indicator capacity of more than 10 thousand liters. with. Orders for mechanisms and boilers of squadron battleships Evstafy and John Chrysost were accepted. A large segment of the plant’s products was rail transport. Only for 1904, almost 1200 cars, steam boilers and parts of railway bridges were manufactured.

However, the events of the First Russian Revolution made their adjustments to the rapid development of the new and powerful enterprise. The unrest that swept the country and the broad strike movement also affected Nawal. In 1906, there was a significant drop in production, forcing the plant to switch to a four-day working week. The activity of some workshops was completely suspended until better times. Nevertheless, "Naval" did not stop its activities.

The Marine Ministry, having studied the experience of using destroyers in the defense of Port Arthur and in the Vladivostok area, instructs the company to design and build four mine cruisers with a displacement of 600 tons, capable of developing a speed of up to 27 knots. The project was based on the Krupp company, which was building for the Baltic fleet Horseman and Gaydamak mine cruisers. Nikolayevtsa created their own project with a number of amendments to it, including at the insistence of the Ministry of the Sea. In 1906, mortar cruisers (subsequently classified as destroyers) “Lieutenant Shestakov”, “Captain-Lieutenant Baranov”, “Lieutenant Zarzarenny” and “Lieutenant Pushchin” were launched and launched in 1907. The destroyers with some delay entered service in 1909. 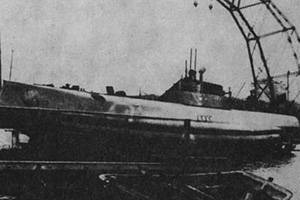 Mine Crab "Crab" at the plant "Naval"

In the same year 1909, under the project of engineer Mikhail Petrovich Naletov, the construction of the first in the world underwater mine layer “Crab” began. For a number of reasons, its construction was strongly delayed, and Naletova's brainchild entered service only in 1915, when World War I was in full swing.

These years were not easy for Naval - the economic situation in the country after the unsuccessful war with Japan and the end of the 1905 – 1907 revolution. left much to be desired. In addition to the construction of four mine-cruisers, the company had almost no private orders. Conducted massive layoffs of plant personnel and tougher working conditions. Over the course of 1909, production dropped significantly - the administration was forced to reduce the working week to four at first, and then to three days. Shareholders are already seriously thinking about the closure of "Naval", the complete dismissal of all workers and the subsequent sale of the plant with a hammer.

Fortunately, the company did not cease to exist in 1910 year. He was immediately saved by several circumstances: by the beginning of 1911, the State Duma and the Ministry of Finance approved and approved the Black Sea Fleet strengthening program, for which more than 150 million rubles were allocated. The post of sea minister was taken by an energetic and competent admiral Ivan Konstantinovich Grigorovich, who clearly understood the need for the further development of military shipbuilding. In the same 1911, “Naval” entered first into the French joint-stock “Society of Nikolaev factories and shipyards”, which was soon transformed into a Russian joint-stock company with a similar name - ONZiF. Military orders began to arrive at the plant in ever-increasing volume.

At the end of the summer 1911, the dreadnought "Empress Catherine the Great" was solemnly laid at the shipyard, the other two ships of the series - "Empress Maria" and "Emperor Alexander III" - were building another Nikolaev shipbuilding plant "Russud". In parallel with the construction of the dreadnought, the plant is being reconstructed and modernized: new equipment is being installed, the so-called “tower shop” is being erected, where artillery towers of the main caliber were to be installed for the battleships under construction and planned. 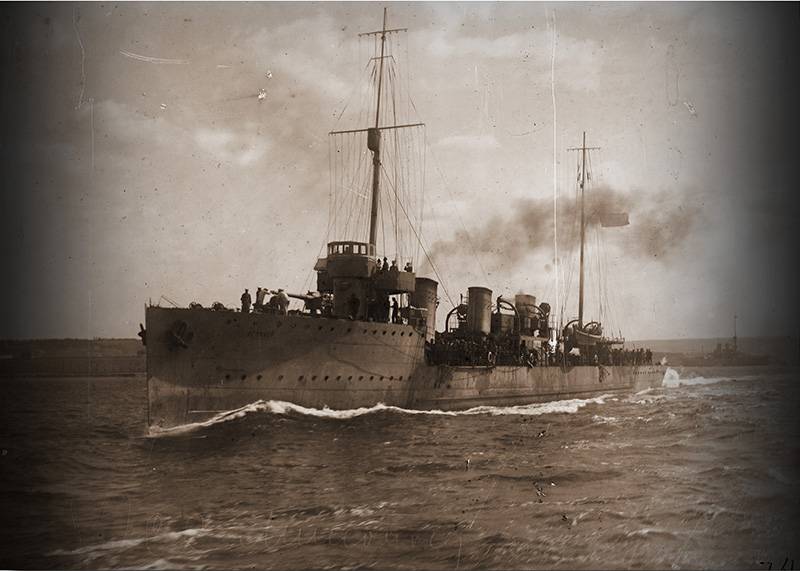 The squadron destroyer Daring comes out of the North Bay of Sevastopol. Background: St. George the Victorious

In 1912, the “Nawal” receives an order for the construction of four newest turbine destroyers of the “Bold” type, which are a further development of the famous Baltic “Novik”. The Black Sea Fleet, along with ships of other classes, was in dire need of modern destroyers. The ships with the names "Restless", "Wrathful", "Bold" and "Shrill" entered service at the end of 1914, already during the First World War.

The time of big guns and great changes

The First World War "Nawal" met with almost fully loaded production facilities. By the beginning of 1915, the plant fully switched to the execution of military orders. The number of workers increased from 8 to 11 thousand people, which made the company in Russia one of the largest in the industry.

In August 1914 was decided to build another, fourth, battleship on the Naval with an estimated readiness for 1917. Technical office under the leadership of the most talented Russian and later Soviet shipbuilding engineer Vladimir Polievktovich Kostenko Numerous improvements and improvements have been made in comparison with the head battleship in the series. At the request of the Naval Ministry, the reservation was strengthened.

In the summer of 1914, after the liberation of the large slipway and the descent of the "Empress Catherine the Great", the fourth Black Sea battleship dreadnought was laid on it, which was named the Emperor Nicholas I. It should be an improved ship compared to its predecessors, which allows it to be defined in a separate type. The events of 1917 were found lowered into the water, but the unfinished "Emperor Nicholas I" at the plant wall. In 1920's battleship, renamed "Democracy", was pulled onto metal.

In parallel with the construction of this ship, engineers from Naval, led by Vladimir Kostenko, were working on projects of promising battleships for the Black Sea Fleet, the main artillery caliber of which was to reach 406 mm. The Empress Catherine the Great, which entered the 1915 year in the year of the Black Sea Fleet, renamed the “Will” after the 1917 revolution of the year, was destroyed by the destroyer Kerch near Novorossiysk in 1918.

The experience of the use of the Black Sea Novikov, thanks to their powerful armament for destroyers from three 102-mm guns and high speed (albeit lower than the design 34 nodes), revealed an even greater need for such ships. In 1915, it was decided to build 8 destroyers on an improved design with reinforced weapons (four 102-mm guns). They were to receive names in honor of the victories gained by Admiral Fedor Fedorovich Ushakov, and therefore they were called “Ushakovskaya series”. Part of the ships was built on the stocks that were leased from the Russud plant. 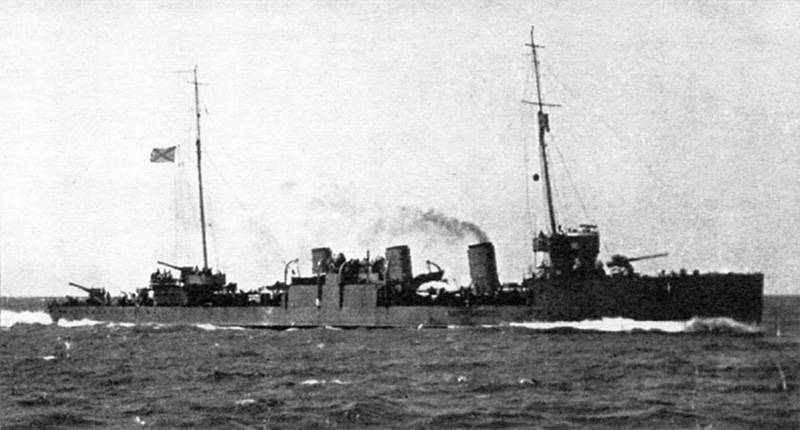 Until the end of 1917, of the eight destroyers, Fidonisi, Kerch, Gadzhibey, and Kaliakria were commissioned. In addition to the first “Ushakovskaya series” in 1917, four more ships were laid, but their construction was soon stopped. By the beginning of World War I, the Black Sea Fleet experienced a need not only in modern destroyers, but also in light cruisers. Two ships of this class, the Cahul and Memory of Mercury, which have been in service for almost 10 years, were considered obsolete by that time.

The program to strengthen the Black Sea Fleet included the construction of four turbine light cruisers with a displacement of 7 thousand tons. In 1913, the first pair, Admiral Nakhimov and Admiral Lazarev, was laid at the Russud plant. Mechanisms and equipment for standing light cruisers were delivered to Nawal, which was in close cooperation with its neighbors.

The second pair, "Admiral Kornilov" and "Admiral Istomin", was laid in 1914 on Russud. Although light cruisers were not built on the Naval stocks, the plant took the closest part in their creation. After the civil war, the first two cruisers, renamed the "Chervona Ukraine" and "Red Caucasus", became part of the Soviet Black Sea Fleet.

1917 and subsequent years were full of events in Russia. After the February Revolution, interruptions in the supply of materials and equipment from subcontractors began; after October 1917, the situation did not contribute to the preservation of shipbuilding processes either. Nikolaev more than once or twice passed from hand to hand. The Germans were replaced by the Red Army, in turn, by units of the Armed Forces of the South of Russia, and then the Reds came again. All this time, shipyards, as indeed, all the enterprises of the city were in a state close to suspended animation. Production stopped. Certain hopes for improving the situation were associated with the final establishment of the Soviet regime in Nikolaev.

To be continued ...
Start: "Black Sea Shipyard: the foundation and the first ships"

Ctrl Enter
Noticed a mistake Highlight text and press. Ctrl + Enter
We are
Fight in the Yellow Sea 28 July 1904 g. Part of 4. Armadillos in the ranks, or altercations about the fate of the squadron"Svetlana". History of creation
8 comments
Information
Dear reader, to leave comments on the publication, you must to register.