October 29 2017
127
Every day, more and more people complain about problems with brain activity - an ever-increasing distraction (ie, the inability to concentrate, to gather thoughts for solving some problems), the difficulty of remembering information, the physical inability to read large texts. , not to mention the books. 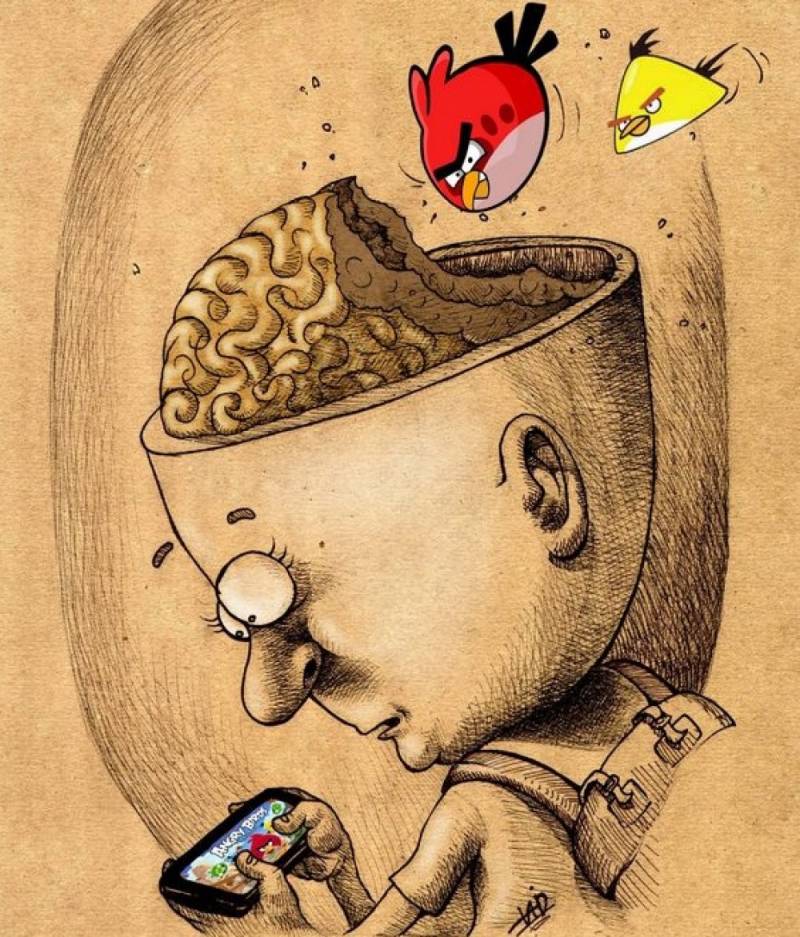 And they are asked to give them something to improve brain activity in general and memory in particular. And, paradoxically, this problem is characteristic not only and not so much for older people, whose brains are weakened, sort of like, “by age”, but for middle-aged and younger people. At the same time, many are not even interested in why this is happening - they automatically blame it on stress, fatigue, unhealthy ecology, the same age, etc., although all this is not even the cause. Among my patients there are those who are far from 70, but who do not have any problems at all with either memory or brain activity. So what is the reason?

And the reason is that, in spite of any arguments, no one, categorically, wants to abandon the so-called constant, round-the-clock “connection to information”. In other words, the accelerated loss of your brain functions began on that momentous day when you decided to be constantly in touch. And it makes no difference whether your need for business, idleness from idleness or an elementary fear of being “not at the level”, i.e. fear of being passed off as a black sheep, eccentric among themselves.

Back in 2008, it was known that the average Internet user reads no more than 20% of the text posted on a page, and avoids large paragraphs in every possible way! Moreover, special studies have shown that a person who is permanently connected to the network does not read the text, but scans like a robot - snatches scattered pieces of data from everywhere, constantly jumps from one place to another, and evaluates information only from the “share” position, that is. e. “Is it possible to send this“ revelation ”to someone?”. But not for the purpose of discussing, but mainly for the purpose of evoking emotions in the form of an animated “burp”, accompanied by short remarks and exclamations in SMS format.

In the course of the research, it turned out that the pages on the Internet, as already mentioned, are not readable, but are fluently viewed in a pattern resembling the Latin letter F. The user first reads the first few lines of the text content of the page (sometimes even completely, from beginning to end), then jumps in the middle of the page, where it reads a few more lines (as a rule, already only partially, without finishing the lines to the end), and then quickly goes down to the very bottom of the page - to see "how it ended."

Red - areas where the reader's attention is delayed the longest.
Yellow - a quick view. Blue and gray areas cannot be read at all.

Therefore, the most effective way of presenting information to an ordinary Internet user is to display information in the form of an inverted pyramid (that is, according to the principle “the lower, the less”) with the mandatory allocation of keywords (so that information consumers understand what is important and what is not very) and the disclosure of not more than one thought per paragraph. This is the only way to stay on the page as long as possible. If, as the page is lowered down the page, the information density does not decrease or, worse, increases (as, for example, in this article), then only a few of them stay on these pages.

My personal opinion is:

The Internet is a real drug. What is a drug? This is a completely useless thing, without which anyone can live beautifully until they try. And when she tries, the addiction arises for life - drug addiction is not treated.

People of all ranks and specialties - from highly qualified university professors to service workers in the maintenance of washing machines - complain about problems with the perception of information. Such complaints can be especially often heard in the academic environment, i.e. from those who, by the nature of their activities, are forced to communicate with people closely and daily (train, lecture, take exams, etc.) - they report that the already low level of reading and perception skills of information with those with whom they have to work , year by year falls lower and lower.

Most people have tremendous difficulties in reading large texts, not to mention books. Even blog posts with a size of more than three or four paragraphs already seem to be too difficult and tedious for perception by the majority, and therefore boring and do not deserve even elementary understanding. There is hardly a person who would not have heard the popular network utterance “too many letters - not mastered”, which is usually written in response to a suggestion to read something longer than a couple dozen lines. It turns out a vicious circle - there is no point in writing a lot, since almost no one will read it, and a reduction in the volume of transmitted thought leads to even more stupidity for not only readers, but also writers. As a result, we have what we have - a massive stupidity.

Even people with good (in the past) reading skills say that after spending a whole day on the Internet and maneuvering among tens and hundreds of emails, they physically can't even start a very interesting book, since reading the first page alone turns out to be a real torture.

Reading simply "does not go", first of all, because:

a) it is impossible to force myself to stop scanning the text, looking for keywords in it and

b) the complex syntax inherent in the majority of classical, high-content or high-tech works, which is completely absent in the exchange of telegraphic SMS-burping, is not absorbed at all.

As a result, one sentence must be re-read several times! The most outspoken people say so directly: I am disgusted with myself.

But that's not all. Because of the constant connection to the Internet, such skills as a person's ability to return to the once meaningful information, analyze what they read and connect their imagination are dramatically deteriorating. Even worse, in 80% of cases, people go to the Internet for dubious entertainment, or they get information from there that has not only zero, but negative cultural value.

At the same time, most people (especially young people) are tied to their gadgets so that when threatened to be disconnected from the network for at least one day, they experience not only mental depression, bordering on panic, but also a real physical breakdown, resembling a narcotic one. Do not believe? Well, turn off your soap box ALL and try to live at least 2-3 of the day without it.

There is an opinion that I fully share that the ability to effectively perceive complex texts, to read complex literature will soon become an elite privilege, accessible only to a particular caste of people. This idea is not new, since even Umberto Eco in the novel “The Name of the Rose” offered to let into the library only those who can and are ready to perceive complex knowledge. And everyone else will be able to read only signs and the Internet.

In short, no pills, no dietary supplements, no diets, no shrink rules, etc. unable to stop brain degradation. Only one thing can stop it - the termination of the receipt of all kinds of informational garbage into the processing system and the daily loading of the brain with so-called “useful information”. This process is extremely complex, and for many people, it is completely impracticable. For many, the train, as they say, has already left.

Gadgets that ensure your constant connection to information / internet - smartphones, iPads, etc., without which you can’t even go to the toilet now - make you almost a moron with a sluggish, apathetic, with a barely thinking brain that is not able to think and analyze . But, like any drug addict, you, of course, are convinced of the opposite - that these soap dishes make your life unrealistically vivid, saturated, comfortable, etc., and you personally are a “highly advanced person” who is always aware of everything.

Thanks to these devices, all kinds of garbage that foul up your on-board computer so that you are only fit to do the most primitive, low-skilled work enters your brain in a continuous stream around the clock. You are not able to speak or write coherently, nor read - your speech is tongue-tied and full of parasitic words. Telling someone about something, you can hardly find the right words, and listening to someone - you quickly lose the thread of conversation and start to miss and yawn. You can not write, because in almost every word you start to make mistakes, but you don’t even know approximately how to use punctuation. But you do cool selfies (and other junk photos) and knock on someone on Viber or WhatsApp.

In short, listen to the bad news: mobile communication should be used only and exclusively in emergency cases. For example, you have come to an unfamiliar city and cannot find a meeting person - you really need to call. Or you are late for an important meeting - it is really necessary to call, i.e. You need to set up your gadget only to receive or transfer the professional and business information you need. And the rest of the time your gadget should be turned off. However, I imagine how uncomfortable you are at the thought of it.

You need to be prepared for the fact that all your surroundings will not understand you, to put it mildly - they will tell you that you are saying hello, absolutely kuku, that you have a roof, etc. Spit and grind. Remember, you are an object for informational attack and you need to defend yourself. As CBS News president Richard Salant said: “Our job is to sell people not what they want, but what we need.”

And finally, you need to re-learn to read books. Real paper books - do you understand? Do not look at your own soap box with a screen for hours with deafening eyes, but read books. It will be hard, but you try. You do not need to force yourself - read Ѕ pages on the first day, a whole page on the next, 1,5 pages on the third day, etc. Consider that the body will resist this in every way - it will be sick, and break, and pull to do anything, if only the brain is not strained.

Ctrl Enter
Noticed oshЫbku Highlight text and press. Ctrl + Enter
We are
About Stalin and KhrushchevWhat you didn't want to know about England
Military Reviewin Yandex News
Military Reviewin Google News
127 comments
Information
Dear reader, to leave comments on the publication, you must to register.