October 28 2017
19
On October 28, people who know exactly what the romance of the sky and attractive space are celebrating their professional holiday. This day is a holiday for pilots, navigators, flight engineers, ground specialists and for all those related to the army aviation. 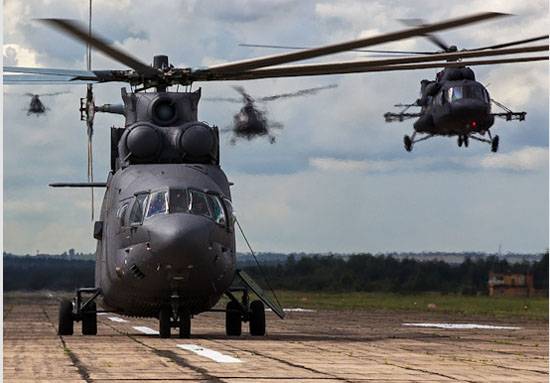 It was 28 of October, in 1948, in Serpukhov, near Moscow, that the first unit of army aviation was formed - the aviation squadron, which received the G-3 helicopters.

Its initial tasks were air transportation of various cargoes, reconnaissance and communication. In other words, tasks were limited to auxiliary frameworks. By the way, it was precisely the auxiliary army aviation that was originally called.
It received the name of the army at the beginning of the 70-ies, after adopting the Mi-24 helicopter, whose main task was to support the actions of the ground forces from the air.

Over the years of its existence, army aviation has participated in various search and rescue operations, as well as in operations to prevent natural and man-made disasters. In particular, the professional experience of pilots was used in the liquidation of the accident at the Chernobyl nuclear power plant in 1986. Experienced "Afghan" pilots performed incredible feats, literally stopping the helicopters over the vent of the destroyed 4 unit, and giving the opportunity to throw sandbags and lead blanks down. The expediency of these measures, as it later turned out, was very doubtful, but this does not cancel the dedication of the actions of the helicopter crews in the sky over Chernobyl and Pripyat.

Army aviation crews were involved in resolving military conflicts on the territory of Russia and the countries of the former USSR, and defended the interests of our Motherland in the “hot spots” beyond the borders of our country. This is the aforementioned Afghanistan, where the success of entire operations against militant groups actively supported by the West and the monarchies of the Persian Gulf often depended on the actions of crews and technical personnel of army aviation.

Nowadays, army aviation takes part in a military operation against international terrorists in the Syrian Arab Republic. Today it is impossible not to recall the death of the crew of the Mi-25 helicopter. The crew commander, Colonel R.Habibullin, and Lieutenant E.Dolgin, at the cost of their lives, thwarted the offensive of the IS (* banned in the Russian Federation) militants on the position of the Syrian army in the Palmyra area.

Pilots of the Russian Army aviation participate in numerous humanitarian operations in Africa, the Middle East, and the countries of Central Asia. This work, unnoticed by many agencies and the media, in fact carries at times no less risks than participation in a direct combat operation. After all, Russian helicopters and Russian crews, which are part of the fleet of many international organizations, have been repeatedly bombarded by various gangs. And subjected to those moments when it was least expected.

Modern army aviation plays an increasing role in the strategy and tactics of rescue and combat operations. It is for this reason that the increase and updating of the helicopter fleet is one of the development priorities of the Armed Forces of the Russian Federation.

The structure of the army aviation of the Armed Forces of the Russian Federation today includes shock, multi-purpose and military transport helicopters.

Until 2020, more than 1 thousand new rotary-wing aircraft should enter the armament of the army aviation. First of all, it is about Ka-52 Alligator combat helicopters. Helicopter designed to destroy tanks, armored and unarmored military equipment, manpower, helicopters and other aircraft of the enemy, is capable of operating in any weather conditions and at any time of the day. The combat vehicle is equipped with the most modern and powerful weapons that can be configured for various combat tasks. In addition, the Ka-52 Alligator is equipped with an electronic protection system and visibility reduction devices that reduce, scatter and distort the thermal footprint of engines, as well as active countermeasures. 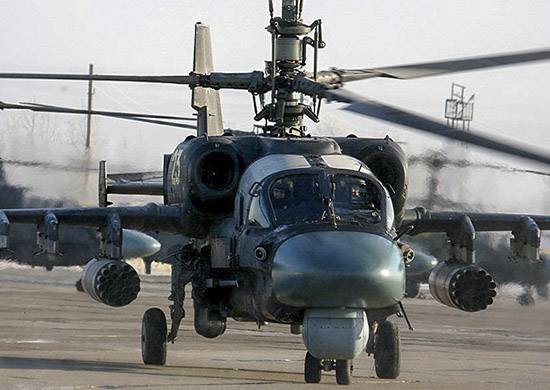 Currently, the holding's specialists are developing an unmanned version of the Ka-226T light multi-purpose helicopter. This development will allow to reach a new level of helicopter building in Russia.

But transformations are transformations, and the main asset of army aviation has always been and remains the moral and volitional qualities of pilots, their professionalism and readiness to do their work without excessive pathos.

"Military Review" congratulates the staff and veterans of the army aviation on the holiday!

Ctrl Enter
Noticed oshЫbku Highlight text and press. Ctrl + Enter
We are
China expands its amphibious capabilitiesAutomatic guns for armored combat vehicles. Point of view of a Western specialist
19 comments
Information
Dear reader, to leave comments on the publication, you must to register.