October 27 2017
36
Over the past three years, when President Alexander Vucic is in power, balancing between Russia and the West has become the basis of Serbian foreign policy, writes RIA News. 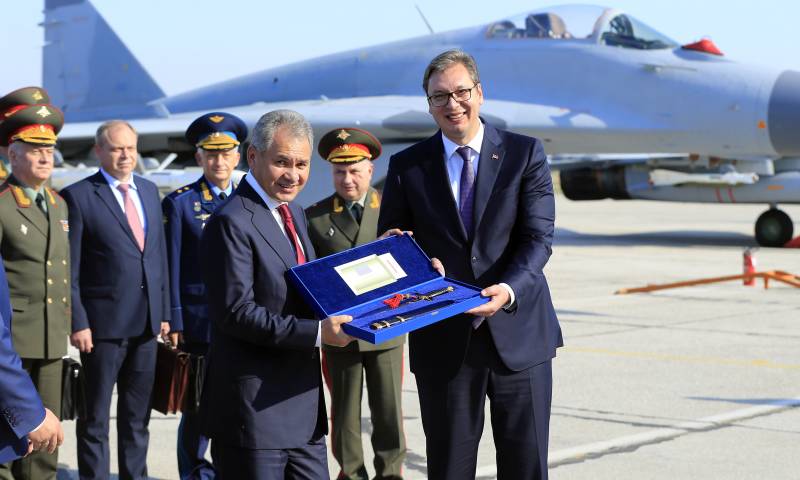 Before being elected to the highest post in April of this year, the politician first visited Moscow, then Berlin, with the support of both Vladimir Putin and Angela Merkel.

I thank the German Chancellor and the President of Russia for having the courage to negotiate with me before the elections, this suggests that they think well of Serbia, and not so bad about me,
said then Vucic.

According to Peter Iskanderov, a senior researcher at the Institute of Slavonic Studies of the Russian Academy of Sciences, “Serbia has been successfully maneuvering between Moscow and the West in recent years, and for it there is no reason to abandon this policy.”

Today, the EU and the US have nothing new that they could offer the Serbs, which it would not have before,
added an expert.

“Against the background of difficult negotiations on Belgrade’s accession to the European Union (approximate date moved now to 2025 year), Serbian society is disappointed in the prospects of integration with the West. In early October, Serbian Defense Minister Alexander Vulin publicly supported the retired General Vladimir Lazarevich, who was convicted by the International Tribunal for actions committed in Kosovo. The result was a diplomatic scandal with the United States. The American ambassador to Serbia, Scot, accused Belgrade of rehabilitating war criminals, ”the article says.

Since then, Vulin has become a public critic of American actions. Commenting on the recent statement by US State Department spokesman Khoyt Yi that it’s time for Serbia to stop balancing between the West and Russia, the head of department noted: this was “the most undiplomatic recent act of pressure on Serbia.” At the same time in October, the Ministry of Defense of the Republic received from Russia six MiG-29 airplanes, for which the Serbian side intends to spend $ 212 million to service.

“One of the key differences between Belgrade and the West with regard to Moscow is the fate of the Russian-Serbian humanitarian center in the city of Niš, which in the US is considered the de facto base of Moscow. In 2015, the Serbian Parliament ratified the SOFA (Status of Forces Agreement) agreement with NATO, on the basis of which Washington insists on closing its office, ”the publication reminds.

Such obligations are not spelled out in the text of the treaty, and Serbia does not take steps in this direction,
said Peter Iskanderov.

According to him, the binding nature of SOFA is overestimated in the press. “It’s more reasonable to call all this a declaration of intent than a real step to join the North Atlantic alliance,” the expert believes.

Despite the unwillingness of the Serbian leadership to concede on the issue of the center, in other cases Belgrade seeks to send positive signals to the European Union.

Under pressure from the EU and the United States in 2015, an agreement was concluded with an unrecognized Kosovo, which many considered a concession on the issue of sovereignty. The decision not to impose sanctions against Russia was given to the Serbian authorities with some difficulty. A firm commitment to European values ​​is also shown by the prime minister in the Vucic administration, LGBT activist Ana Brnabic, who declared right after her appointment in 2017 that Belgrade would choose the EU, if necessary, the EU, not Russia.

It is in Serbia’s interest to maintain the current state of uncertainty for as long as possible. But what if the pressure is too strong? In this case, Belgrade will still have to change its policy in terms of both international relations and defense,
said Serbian expert Alexander Radic.

US energy projects in the Balkans may well be such a turning point. “In the logic of lobbying for their economic interests, the administration of President Trump is interested in the peninsula as a place to host a transit network for transporting American liquefied gas. According to the blue lines of pipelines, the United States intends to supply its hydrocarbons not only to the countries of the region, but further to Ukraine, ”concludes the publication.

Ctrl Enter
Noticed a mistake Highlight text and press. Ctrl + Enter
We are
Moscow and Minsk will multiply the former strength of the air defense of fraternal Serbia: C-300, "Baikals" and "MiGs" for BelgradeThe action “Military service under the contract is your choice!” In Rostov-on-Don: future contract servicemen, exhibitions and “Russian Knights”
36 comments
Ad