October 27 2017
83
September 8 1944 on London fell the first German long-range ballistic missile V-2 (from the German V-2 - Vergeltungswaffe-2, weapon retaliation). She hit a residential area, leaving after the explosion of a crater with a diameter of approximately 10 meters. As a result of the rocket blast, three people were killed, another 22 man received various injuries. A day earlier, the Germans launched a rocket with a warhead in Paris. These were the first combat launches of Hitler's “miracle weapon”.


Earlier, even 13 June 1944, the Germans for the first time massively used the V-1 projectile aircraft (cruise missiles) to strike London. However, unlike the traditional bomber aircraft and its predecessor, the Fau-1 projectile, the V-2 rocket was already a fundamentally new type of weapon - the world's first ballistic missile. The flight time of the V-2 to the target was no more than 5 minutes, and the Allied alert systems simply did not have time to react to it. This weapon was the last and most desperate attempt of Hitler's Germany to turn the course of the Second World War in their favor.

The first launches of missiles, also known as A-4 (Aggregat-4), were to begin in the spring of 1942. However, 18 April 1942, the first prototype of the rocket under the designation A-4 V-1 exploded directly on the launch pad during engine preheating. The subsequent reduction in allocations for the implementation of this project postponed the start of complex testing of new weapons for the summer months. An attempt to launch the second prototype of the A-4 V-2 rocket was made by 13 June 1942 of the year. The Luftwaffe inspector General Erhard Milch and the German Minister of Arms and Ammunition Albert Speer came to see the launch. This attempt also failed. On the 94 second flight of the rocket due to the failure of the control system, it fell 1,5 kilometers from the launch point. Two months later, the third prototype of the A-4 V-3 was also unable to reach the required range. Only the fourth launch of the A-4 V-4 prototype, which took place on 3 on October 1942, was considered successful. The rocket flew 192 kilometers at an altitude of 96 kilometers and exploded 4 kilometers from the intended target. After this launch, the missile tests went more and more successfully, until the end of 1943, the 31 launched the V-2 missiles. 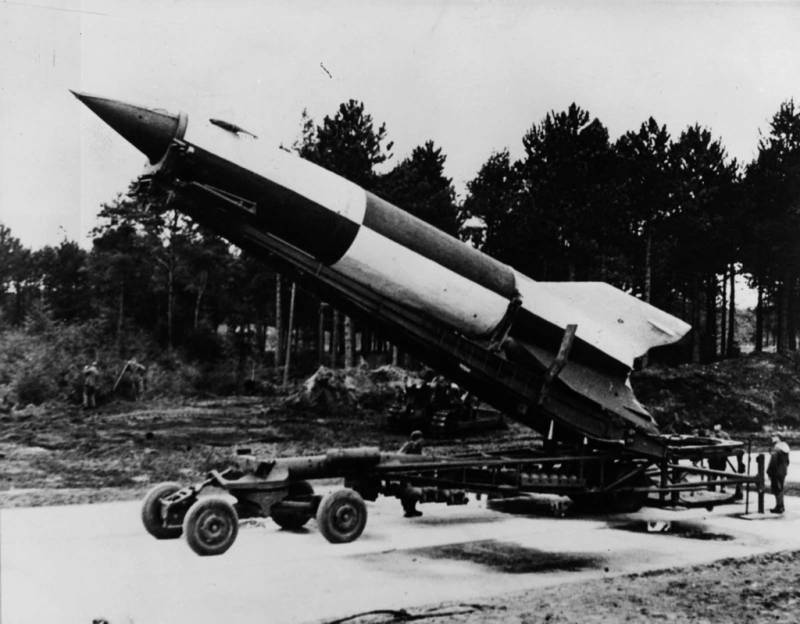 To some extent, the launch of the 3 October 1942 prototype rocket of the year was decisive. If it ended in failure, the program could be closed, and the team of its developers simply disbanded. If this happened, it is not known in what year and in what decade mankind managed to open its way to space. Perhaps the closure of this project would have an impact on the course of the Second World War, since the enormous funds and forces that Hitler Germany spent on its rocket "miracle weapon" could be redirected to other goals and programs.

Already after the war, Albert Speer called the entire program for creating V-2 rockets a ridiculous idea. “Having supported this idea of ​​Hitler, I made one of my most serious mistakes. It would be much more productive to concentrate all efforts on the release of ground-to-air defensive missiles. These missiles were created in 1942 year, codenamed "Wasserfall" (Waterfall). Since we could produce up to 900 large offensive missiles every month, we could easily have produced several thousand smaller and costly anti-aircraft missiles that would protect our industry from enemy bombardment, ”Albert Speer recalled after the war.

The long-range V-2 long-range ballistic missile with a free vertical launch was designed to hit areal targets at predetermined coordinates. The rocket was installed LRE with a two-component fuel turbopump. The controls of the rocket were gas and aerodynamic control surfaces. The rocket control is autonomous with a partial radio control in the Cartesian coordinate system. Autonomous control method - stabilization and program control. 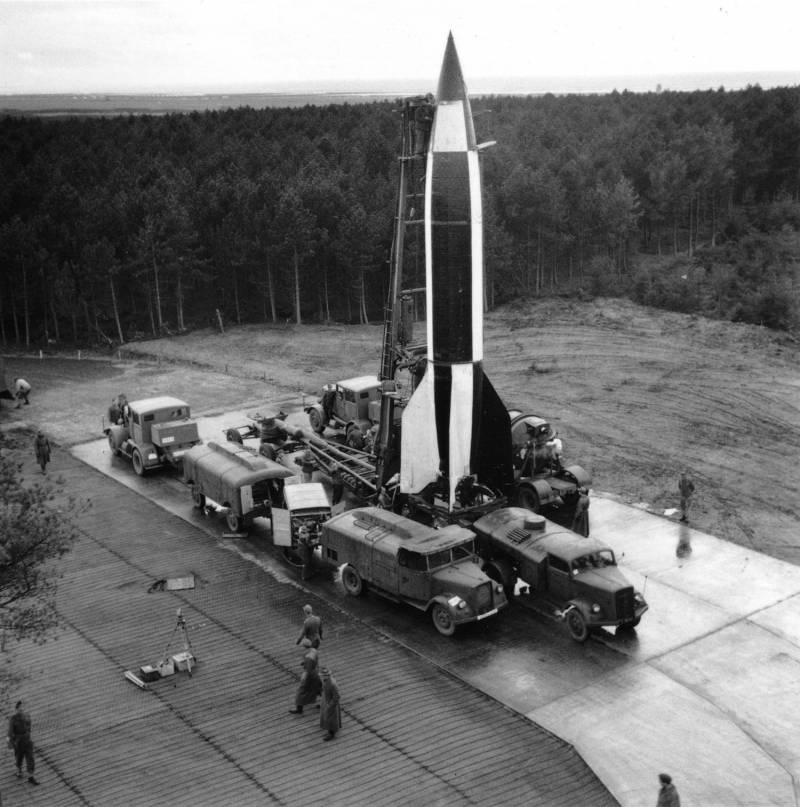 Technologically, the V-2 rocket was divided into 4 main parts: warhead, instrument compartment, fuel compartment and tail compartment. The fuel compartment occupied the central part of the rocket. Fuel (75% aqueous solution of ethyl alcohol) was in the front tank, the oxidizer (liquid oxygen) - in the lower tank. The division of the rocket into the 4 main parts was chosen based on the conditions of its transportation. The battle charge (the mass of explosive in the head of the rocket was approximately 800 kg) was located in the conical head compartment. In the upper part of this compartment was located pulse pulse fuse. Four stabilizers were attached to the tail section of the rocket by flange joints. Inside each stabilizer there was a shaft, an electric motor, a chain drive of an aerodynamic steering, and a steering wheel deflecting the gas steering wheel. Each V-2 ballistic missile consisted of more than 30 thousands of individual parts, and the length of electrical equipment wires used in it exceeded 35 kilometers.

The main units of the V-2 ballistic rocket were a combustion chamber, a steam and gas generator, a turbopump unit, hydrogen peroxide tanks and sodium products, and a battery of 7 compressed air cylinders. The rocket engine provided thrust of the order of 30 tons in a rarefied space and around 25 tons at sea level. The combustion chamber of the rocket had a pear shape and consisted of outer and inner shells. The controls of the V-2 ballistic missile were aerodynamic controls and electric rudders of the gas rudders. To compensate for the lateral demolition of the rocket, a radio control system was used. Two special ground-based transmitters radiated signals in the firing plane, and the receiver antennas were located on the tail stabilizers of the ballistic missile. 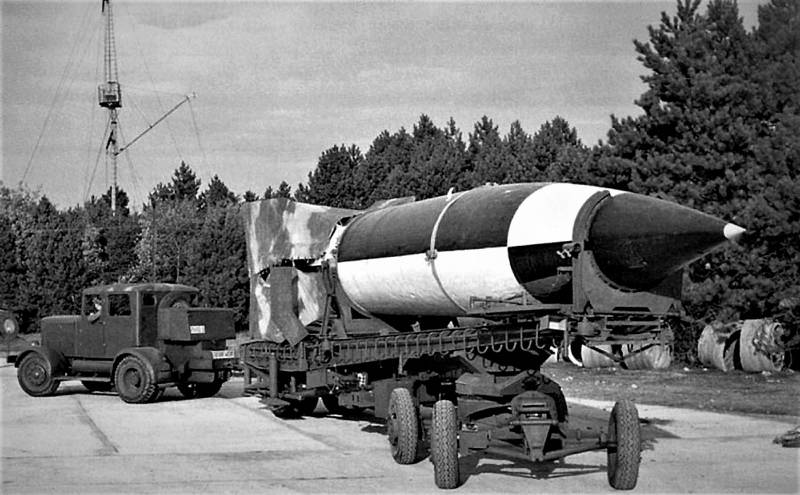 During the 18 months of mass production in Germany, 5946 V-2 rockets were assembled. Until April, 1945, when the last launch sites of ballistic missiles were in the hands of the Allied forces, the Nazis managed to launch their ballistic missiles 3172. The main targets of the attacks were London (1358 missiles launched) and Antwerp (1610 missiles), which became an important supply base for the allied forces in Europe. At the same time, the reliability of V-2 ballistic missiles throughout the operation was low. More than a thousand rockets exploded either at the start or already at different stages of the flight. Many of them have significantly deviated from the course and fell in deserted places, without causing any harm. Despite this, multiple hits of V-2 rockets resulted in huge human casualties. The largest number of deaths was brought by the rocket, which hit the crowded Rex cinema in Antwerp, then 567 people died. Another V-2 hit the Woolworth department store in London, killing 280 shoppers and store employees.

In general, the effect of German retaliatory weapons was insignificant. In the UK, 2 people were killed by Fow-2772 ballistic missiles (almost all of them were civilians), in Belgium - by 1736 people, in France and Holland - several hundred more. The 11 V-2 missiles were fired by the Germans at the German city of Remagen captured by the Allies, the number of casualties resulting from this attack is unknown. In general, we can say that the “miracle weapon” of the Third Reich killed several times fewer people than the number of dead prisoners of the underground concentration camp “Mittelbau-Dora” who died while producing it. It is believed that around 1 thousands of prisoners and prisoners of war who worked in difficult conditions and practically did not rise to the surface (mainly Russians, Poles and French) were involved in the construction of Fau-2 projectiles and Fau-60 ballistic missiles in this concentration camp. More than 20 thousands of prisoners of this concentration camp died or were killed.

According to the estimates of the American side, the program to create and manufacture V-2 ballistic missiles cost Germany a truly “cosmic” amount equivalent to 50 billion dollars, that is, 1,5 cost more than the Americans spent on the “Manhattan project” and creating nuclear weapons. In this case, the effect of V-2, in fact, turned out to be zero. This rocket did not have any impact on the course of military operations and for one day failed to postpone the collapse of the Hitler regime. Launching 900 V-2 ballistic missiles per month required German industry 13 thousand tons of liquid oxygen, 4 thousand tons of ethyl alcohol, 2 thousand tons of methanol, 1,5 thousand tons of explosives, 500 tons of hydrogen peroxide and a huge amount of other components. Moreover, for the mass production of rockets, it was necessary to urgently build new enterprises for the production of various materials, semi-finished products and semi-finished products, many such plants were made underground. 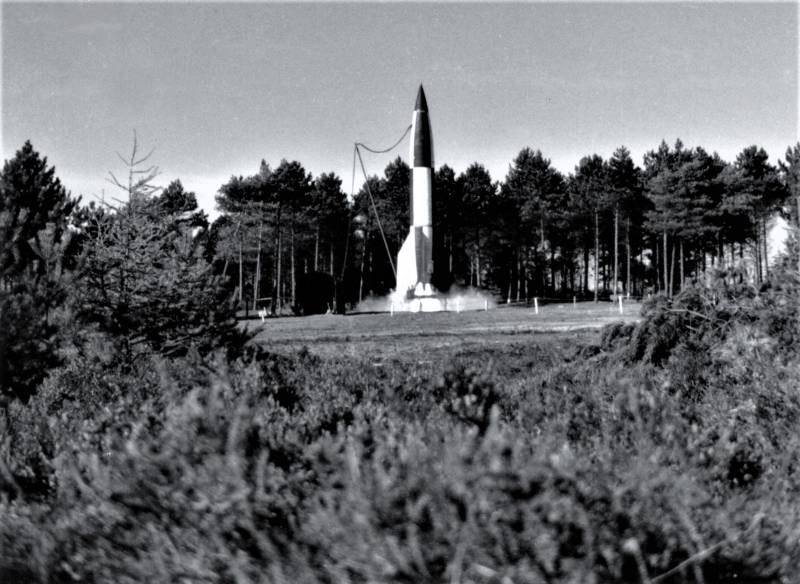 Failing to fulfill its primary purpose, the V-2 ballistic missile did not become a retaliation weapon, but it opened the way for the stars to humanity. It was this German rocket that became the first in stories an artificial object that managed to make a suborbital space flight. In the first half of 1944, in Germany, in order to debug the rocket design, a series of vertical launches of V-2 rockets were carried out with a slightly increased engine operating time (up to 67 seconds). The height of the rocket at the same time reached 188 kilometers. Thus, the V-2 rocket became the first artificial object in the history of mankind, which managed to overcome the Karman line, the so-called altitude above sea level, which is conventionally accepted as the boundary between the earth's atmosphere and space.

Doug Millard is a space exploration historian and curator of the London Museum of Space Technology, who believes that the launch of trophy and later modernized V-2 rockets began both Soviet and American missile programs. Even the first Chinese ballistic missiles Dongfeng-1 also began with the Soviet P-2 missiles, which were created based on the design of the German V-2. According to the historian, all the first achievements in the field of space exploration, including the landing on the moon, were made on the basis of V-2 technologies.

Thus, it is not difficult to note the direct connection between the V-2 ballistic missile, which was created with the help of slave labor of prisoners of war and prisoners and launched against targets from the territory occupied by the Nazis in Europe and the first American space missions. Millard notes that Fow-2 technology has allowed the Americans to land on the Moon. “Was it possible to land a man on the moon without resorting to the help of Hitler’s weapons? Most likely, yes, however, it would take significantly more time. As is the case with many other innovations, the war managed to seriously spur the work on rocket technologies, accelerating the advance of the space age, ”said Millard. 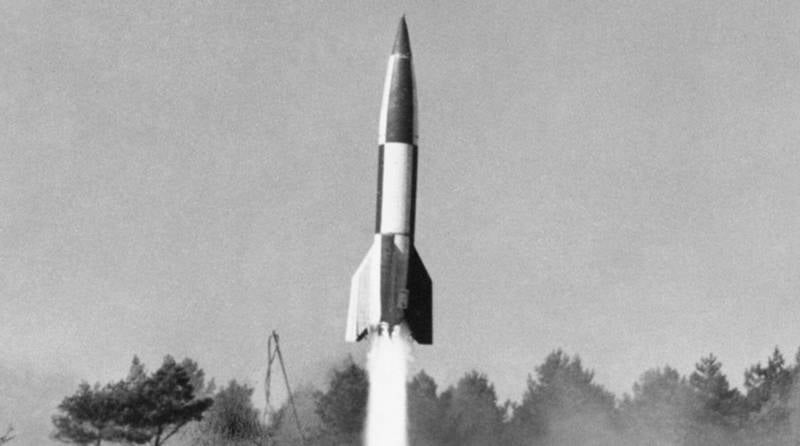 The fundamental principles that underlie modern rocket technology have not undergone significant changes over more than 70 years since the end of World War II. The design of the rocket engines remains similar, most of them still use liquid fuel, and in the onboard control systems of the missiles there is still room for gyroscopes. All this was first introduced on the German V-2 rocket. 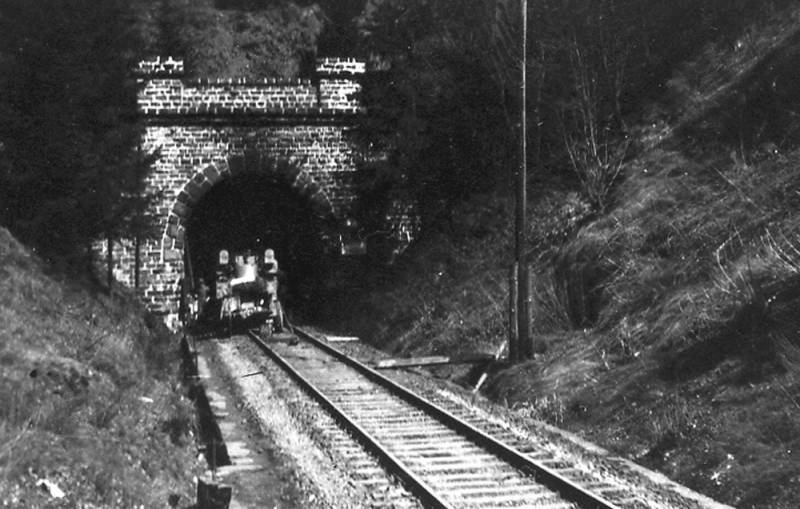 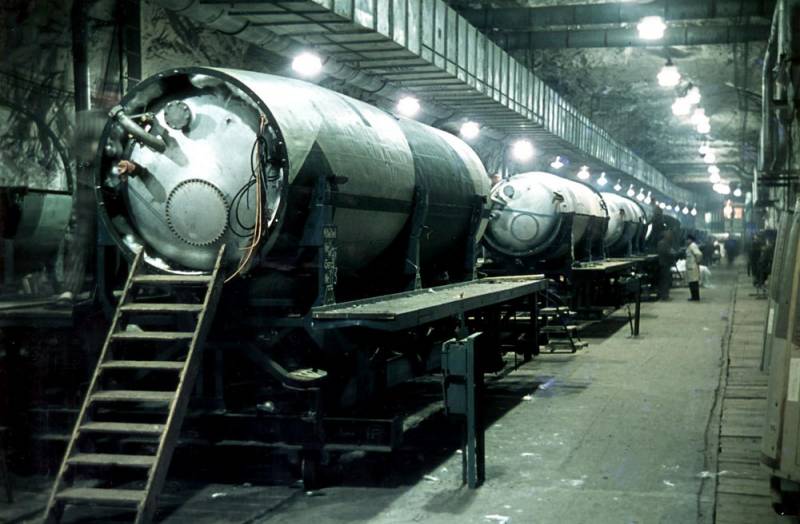 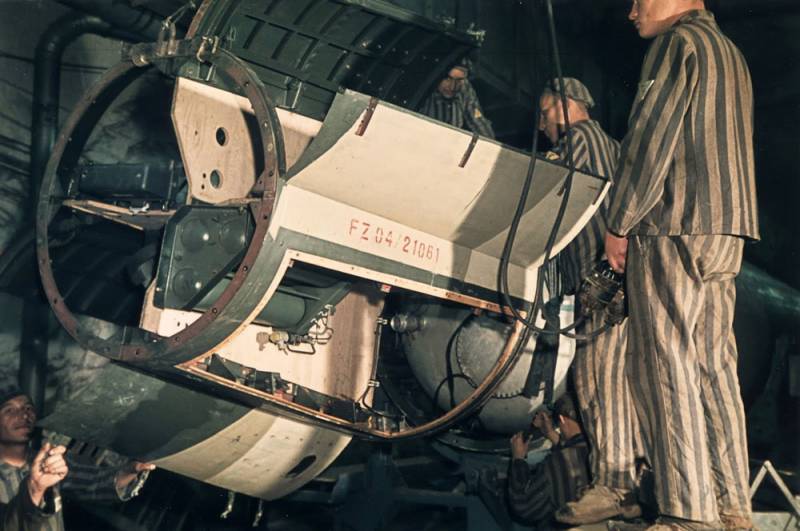 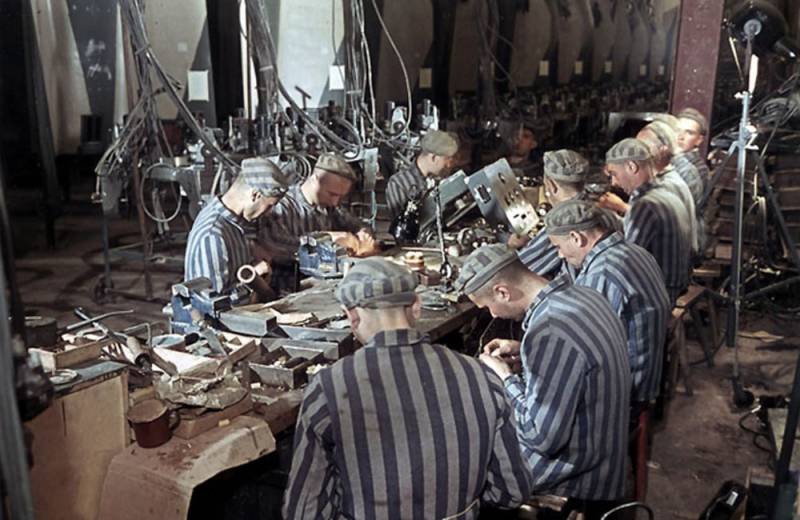 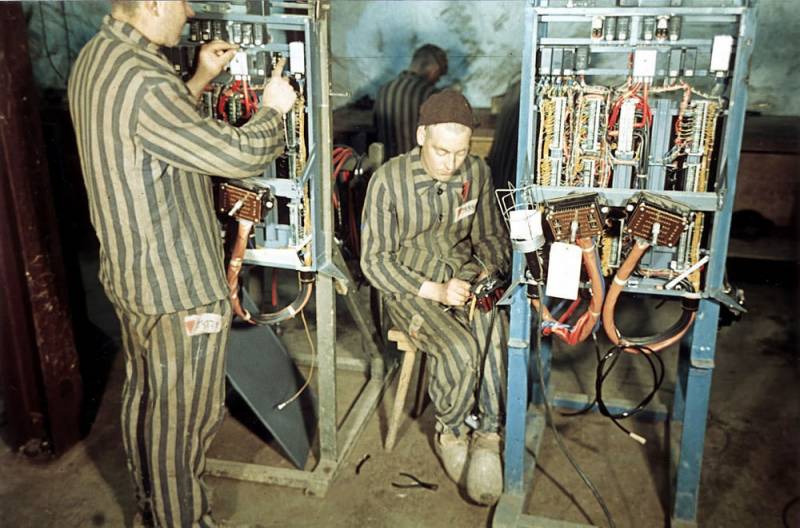 Ctrl Enter
Noticed a mistake Highlight text and press. Ctrl + Enter
We are
Developments in the field of automatic guns and ammunition70 years ago the Germans first used the V-1 projectile
83 comments
Ad