Why Putin will not go to the polls next year 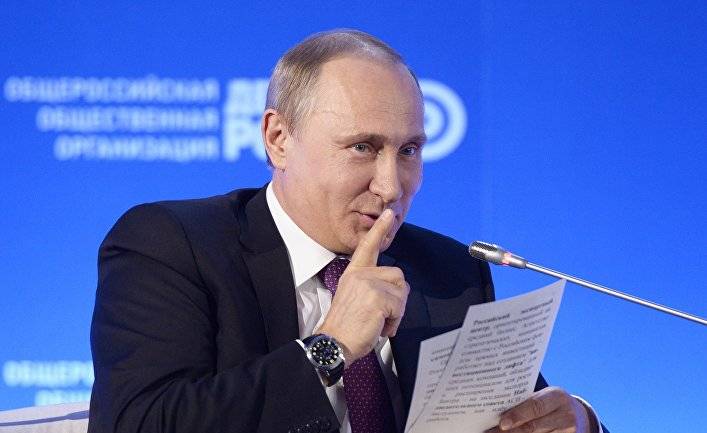 First of all, we will expose the myth of tens of billions of dollars, euros and moggles stored in GDP in the West. This is how only losers judging by their unrealizable dreams think. Since the “civilized West” began a third century ago to withdraw money of any person without a court decision, banks not only provide information about customers, but also participate in the withdrawal of funds ... understandably. If we consider that the disagreeable US politicians come under attack, Gaddafi and Hussein are an example of this, the values ​​in the West are held by “aristocrats and degenerates”.

The president of Russia, popular in his homeland and loved by voters, has much more valuable things in life. Like any politician of such a rank, he wants to enter historyleaving behind a good memory and such a mark in history, which will be remembered for centuries. Vladimir Putin does not belong to the greedy, stupid and cowardly. Is that provides different Yanukovych asylum.

Today, the current president of Russia has every chance of entering the newest history of Russia with no less luggage than Stalin. About which they say that he "accepted Russia with a plow, and left it with an atomic bomb." For this, Vladimir Putin, who is accustomed to leading and keeping the situation under control, needs to remain in power as long as possible.

The scheme was calculated during his second term. In strict accordance with the current legislation, the GDP transfers the presidency to Medvedev, himself becoming the country's prime minister. Given the age of Vladimir Putin, in 2018, it seems logical to transfer power to 6 for years to a successor, taking over the post of prime minister.

It seems clear that Medvedev will not be president before 2024. Thus, Dmitry Anatolyevich will have to free the post of prime minister for GDP. By the election of 2024, Vladimir Putin will be 71 year. At the same age became the president of Donald Trump. A strong and healthy Putin at this age will not be able to leave the presidency without hope of ever taking it again, but on the contrary, he will return to the leadership of the country.

For a true leader who is used to keeping everything under his control, this seems to be a sensible decision. At the same time, the developing situation also contributes to this.

Certainly difficult next 6 years, with inevitably very painful decisions in Ukraine, will be the responsibility of the successor to Vladimir Putin. And the situation with any development of the situation will be accompanied by discontent of the population. Some will be dissatisfied with the fact that the remnants of Ukraine are not accepted into Russia, others - that Russia is spending money on the restoration of a “foreign” country. Actually, the development and change of the vector of public opinion is already clearly visible. The tents at each corner with donations for the Donbass in 14-15 today gave way to the rumor that "because of Ukraine, we began to live worse."

Next year, the cries of "Russia, send in troops!" May begin. The United States is quite able to provide such a "gift" to Russia, with the hands of the Nazis gulf of Ukraine with blood. And the subsequent restoration of Russian influence in this area will cause even greater costs in the early years and even greater dissatisfaction.

But let us leave political predictions - today it is impossible to verify their authenticity, as well as to disprove. But you can look at the facts.
Today, in addition to the traditional Yavlinsky-Zhirinovsky, a number of self-promoted candidates claim the presidency of Russia, guaranteeing the transformation of the presidential race not even into a show, but into a low class booth. To participate in which a person like Vladimir Putin is simply not comme il faut.

I'm not even talking about the poet Alina Vitukhnovskaya and not about the honored inventor of Russia Vladimir Mikhailov. Just look into the honest eyes of Ksyusha Sobchak and you will understand - the show behind the glass in a madhouse-3 is guaranteed.

And so that Xu was not lonely and bored, the former deputy of the State Duma, the mayor of Arkhangelsk, Alexander Donskoy, would look great with her. This political figure has already taken the first steps towards his triumph - he declared himself gay, went to buy bread at Sterligov’s shop and starred in a poorly directed video, pretending to be a victim of an attack of an incomprehensible type who suddenly mounted on a poor gay presidential candidate.

Against this background, the fake diploma of the university is perceived by Donskoy as a childish prank. And an old saying comes to mind: "I am with such a hectare ...".

In my opinion, in such a company, Vladimir Putin simply has nothing to do.

PS Of course, all of the above can turn into dust simply because Vladimir Putin will not decide in such difficult times to give the presidency "in good hands." But over the past 17 years, the team was somehow formed by them and repeatedly tested. And times - times do not choose - they live and die in them. And after 2024, they won't be any easier.
Better - yes.

Ctrl Enter
Noticed a mistake Highlight text and press. Ctrl + Enter
We are
Judgment in Tripoli. Saif al-Islam Gaddafi sentenced to deathResults of the week. “In our cooperative, the board is always agreed”
267 comments
Information
Dear reader, to leave comments on the publication, you must to register.