To the moon - the whole world 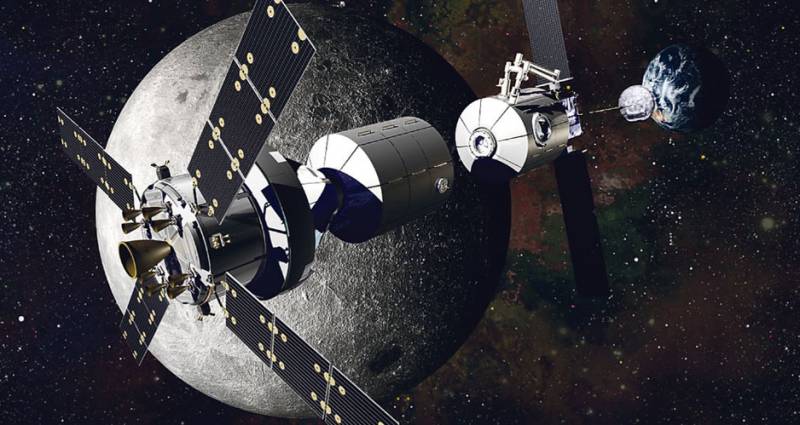 At the seemingly ordinary event, the 68-th International Astronautical Congress, which took place in Australian Adelaide at the end of September, the first step was taken towards the beginning of the actual development of deep space by Russia. NASA accepted an invitation for the joint construction and subsequent operation of the lunar orbital space station (LOX).

Since the project is technically complex and far from cheap, Russia immediately proposed expanding the number of participants to include, in addition to the originally implied ESA, Japan and Canada, also the BRICS countries. Today, such a broad cooperation does not seem fiction. However, time will tell who is ready to join the work.

The future near-moon station was named Deep Space Gateway - “Gateway to deep space”. It is intended to be an outpost for the construction of a habitable lunar base, and in the distant future for flights to Mars. LOKS is planning to start building the 2024 year, that is, at the end of the estimated functioning of the International Space Station (ISS), which, by agreement of the participants, should cease to exist.

Taking into account the vast experience of our country in the construction and operation of long-term space stations, without any discussion, a general decision was taken that the creation of LOX will use the Russian standards of life support systems and docking stations. In continuation of the traditions established on the ISS, each of the project participants will contribute to the common cause, which is expressed in the financing and technical equipment of LOX. The Russian contribution at the design stage is so far marked by the creation of only one gateway module. Retrofitting - with an increase in the volume of tasks.

Although by and large it is more logical to “dance” from the Russian base unit, by analogy with the service module of the ISS. In any case, our systems of life support, waste management, oxygen regeneration and other equipment have undergone many years of testing in extraterrestrial conditions and proved their reliability. However, it is possible that at the next stage, our station segment, by analogy with the ISS, will include not one, but several compartments. When it comes to sending people to the surface of the Moon, you need to have in place a fully-run Russian landing module. This is reasonable both as a supplement to the American module and from a political point of view - suddenly there will be discord between the project participants.

Now NGO them. Lavochkina is actively recalling the long-standing developments of the landing of automatic vehicles on the lunar soil. Over the decades of the absence of scientific space in Russia, they have thoroughly forgotten how this is done. We'll have to learn again. Most of the designers and engineers of those early years of the triumph of the Soviet lunar automatic stations, because of their age, no longer work in the enterprise. And the new generation has no such experience.

In addition to contractual obligations for the construction of LOX (supply of a lock module), Roskosmos must necessarily solve several technical problems. First of all, create a manned ship "Federation". This is task number one, because otherwise Russia simply will not have the means to deliver astronauts to the moon. Funding is coming, waiting for the results. The first flight of the "Federation" in an unmanned version, we recall, is scheduled for 2022 year.

The following follows logically from this task: the creation of a new launch vehicle, the Soyuz-5, on the Phoenix theme. By the first flight of the "Federation" with the crew, this RN should be fully tested in unmanned launches, including commercial ones, under the Sea Launch and Land Launch / Baiterek programs (launched from the Baikonur cosmodrome). The third task is to build a launch complex for the Angara-5 launch vehicle at the Vostochny cosmodrome. The problem is that the Soyuz-5 launch vehicle is too small in terms of carrying capacity (17) for manned flights towards the Moon and is only suitable for near-Earth orbit. A more powerful carrier is needed, namely, the 25-tonne Angara-5, which in turn requires a launch facility.

Construction should begin this fall. The project is ready, the estimate is determined, funding is provided, the timing is known. The contract with the general contractor is signed. They promise to manage in three years. In order to avoid unnecessary mistakes in the project, the experience of building such a structure at the Plesetsk cosmodrome was taken into account.

To fully participate in LOX, it is necessary to solve all the indicated tasks. Nevertheless, it is hoped that by the year 2024 it will succeed.

"Union" flies into space for half a century. And the eponymous rocket carrier, based on the legendary royal "seven" (P-7), and even more - October 4 celebrated its 60 anniversary. It is time for peace, skeptical "experts" hint. But they do not understand the main thing: rockets and space ships are not made for the fashion show, where modern style is in high esteem. In a manned space program, the main criterion is the reliability of the systems. Over the past years, the "Unions" (and ships, and carriers) have accumulated on their reputation with interest. Recall that the Soyuz twice saved the crews in complex emergencies, and a much more modern, electronics-stuffed Shuttle two full crews, 14 astronauts, alas, ditched.

New American manned ships, which are preparing for their first flights, have yet to develop positive statistics. And it is far from a fact that the matter will immediately go flawlessly, even if the systems are tested on ground test benches. It is impossible to take into account everything - the practice of space flight proves it.

What else the Soyuz spacecraft is good at is that it can be launched directly into lunar orbit with the help of already existing launch vehicles Proton-M or Angara-5. The only thing that will be required additionally is the upper stage. In the same way, cargo ships of the Progress type, which will deliver oxygen, products and consumables to the station, can be launched in the direction of the Moon.

Soyuz was developed in 60 for the lunar complex. Another thing is that for a number of reasons he had to linger in Earth orbit for half a century.

The moment came when you could put a fat point in the discussion of super-heavy media. Our initial position was as follows: to be super-heavy, but in due time. And this time seems to come, for the contours of the future giant are looming on the horizon.
Nobody is fundamentally against the carrier of the 100-ton and heavier class as such. The only problem is that such payloads for civilian or military purposes do not yet exist. But since a fundamental decision has been made to go to the moon, it means: somewhere to 2030, such payloads will appear.

Roscosmos has finally decided on the phased creation of super-heavy RN after comprehensive development of the Phoenix theme, that is, the creation of Soyuz-5 carrier. His first stage will be one of the modules in the super heavyweight layout. These plans are gradually becoming a reality, because according to Phoenix, funding has already been opened. It is hoped that at the beginning of 2020's, the Soyuz-5 will fly, and there they will take on the heavyweight.

Its main cargo (military "baggage" for the time being left behind the brackets) will be lunar manned vehicles and upper stages. The latter contain several tens of tons of fuel to ensure that a ship with astronauts is sent to the departure trajectory to the Moon. For clarity, the Proton-M launch vehicle introduces tons of cargo into the 22 orbit, and 7 tons to the Moon. Soviet "Energy" - respectively 100 and 32 tons of cargo. Therefore, the closer we are to the Moon, the greater the need for super-heavy PH. After all, the annual cargo traffic between the Earth and the lunar orbits can be measured in tens and hundreds of tons, until it passes to thousands.

According to preliminary information, the assembly of LOX is planned to be conducted directly in the lunar orbit. Although it would be much easier on near-earth. And then with the help of a powerful tug, they would have abandoned the station already bundled closer to the Moon.

Obviously, LOX will last at least 25 years (by analogy with the ISS), and with a planned update of the modules, it takes much longer. Crews from Earth will arrive here and take-off modules from here to the Moon. A transshipment base for lunar colonies-settlements will appear here when the development of the resources of our natural satellite begins. In general, the prospects loom.
It is expected that by the middle of the next decade, LOX will begin to function as planned. For Russia, this will be the second attempt to achieve the cherished goal after the offensive, absolutely unreasonable closure of the Soviet lunar program. I want to believe that this time we will succeed.

Ctrl Enter
Noticed oshЫbku Highlight text and press. Ctrl + Enter
We are
About the prose of life in Apollo missionsMission to Mars will provide US space leadership
Military Reviewin Yandex News
Military Reviewin Google News
102 comments
Information
Dear reader, to leave comments on the publication, you must to register.