October 27 2017
42
More recently, it seemed that the September mutual exchange of "courtesies" between the "Infant Terror" of world politics Donald Trump and Kim Jong-un would be a harbinger of a storm. However, this was only a not too loud prelude. Right now, after what seemed to be a lull, one after another, signs of a terrible “play” began to appear, designed to shake the whole world to the ground. 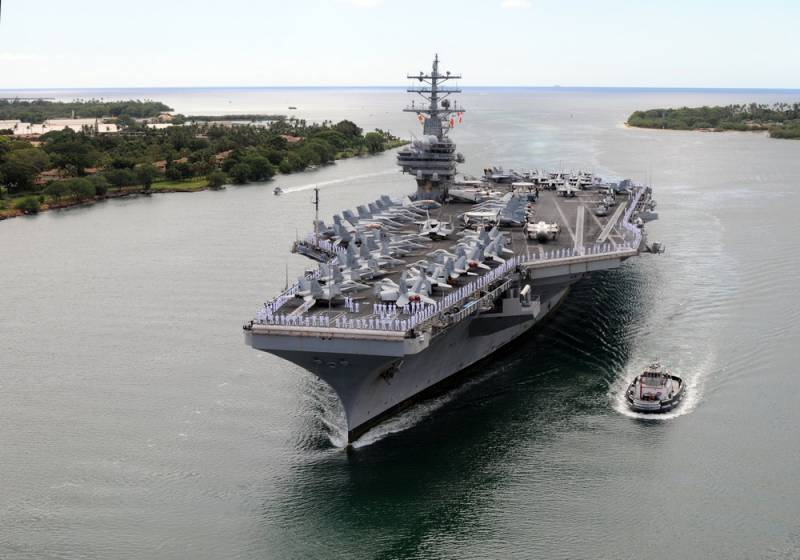 Recall predicted, and, according to knowledgeable sources, eagerly awaited by the American hawks and military rocket launches to mark the next holiday in the DPRK - the day of the founding of the Korean Workers' Party - October 10. The improved weather didn’t change anything either - in that day, the rains stopped in North Korea, which so often prevented the holding of rocket “fireworks” under the leadership of the Chief Executive Officer.

It became obvious to all that Pyongyang, stepping on the throat of its own song, decided to show goodwill and offered a change: canceling the already completed missile tests in response to the rejection of unscheduled US-South Korean military exercises in the waters of the Sea of ​​Japan.
Even a frantic young commander refrained from visiting his defense enterprises specializing in nuclear or rocket technology, which he liked so much, limited himself to a modest visit to a shoe factory, during which he called for improving the lives of the population, increasing the production of high-quality footwear. However, as time went on, it seemed that overseas were not going to curtail military preparations aimed against Pyongyang.

Moreover, even from the mouth of the Washington pigeons, statements began to be heard, which only with a stretch can be classified as peace-loving. So, the head of the US foreign policy department suddenly declared that he would continue negotiations until the first bomb fell ... At the same time, it was stressed that all diplomatic efforts on the North Korean track have been fruitless for a quarter of a century. This passage can be understood as follows: we in the State Department are making efforts to solve problems peacefully, but our people in uniform do not listen to us. So, opponents, that is, Pyongyang, should think hard about this, and the sooner, the better.

President of the Republic of Kazakhstan Moon Zhe Ying, who seemed to be positively related to North Korea, was surprised and said that strength was needed to maintain peace. Read, apply it in relation to the northern neighbor. Sayed at the opening of the military exhibition in Seoul, against the background of fighters and bombers, these words sounded particularly ominous.

Apparently, therefore, neither the visit by the main North Korean negotiator on the nuclear issue, Choi Son-hee, nor the participation in the representative Moscow Conference on Non-Proliferation in the third decade of October, gave anything in Moscow at the beginning of October. The chance of meeting here with American colleagues was never used, contrary to the expectations of many. Much the same can be said about the visit of the delegation of North Korean parliamentarians to St. Petersburg in the middle of October this year at the 137 session of the Inter-Parliamentary Union. The expected meeting with South Korean lawmakers, in the course of which was given the chance to at least begin to discuss the accumulated problems, did not take place.

However, such a nervous reaction of Pyongyang is quite explicable. It was due to the very nature of the US-South Korean military games that started last week.

Moreover, with the involvement of an aircraft carrier attack group hastily equipped on the way, led by the nuclear aircraft carrier Ronald Reagan with seven dozen aircraft on board. In addition, the vast majority of South Korean fleet - about seventy ships, including the flagship, the helicopter carrier “Tokto”, and the latest destroyers equipped with the Aegis system, which have repeatedly tracked the launches of North Korean missiles. This is not counting the numerous submarines on either side, as well as the Japanese observers (if necessary, at any time ready to come to the rescue). The greatest intrigue remains the transfer of additional forces by the Americans aviation from the mainland of the United States: at an airfield in the Republic of Kazakhstan, South Korean journalists spotted the F-18 from a force usually located in the desert state of Utah. Moreover, it turned out that immediately before the transfer to the troubled peninsula, the military personnel underwent a training course on actions in the conditions of applying chemical and bacteriological weapons. Together with the reconnaissance aircraft appeared in South Korea, under the pretext of participating in the aforementioned military exhibition held on the outskirts of the South Korean capital, advertised as the world's best multi-purpose F-35. It is clear that, if necessary, they may well be involved on the North Korean track. This - not counting the strategic B-1B, also ready at any time to join the "show".

It is worth noting that neither in Washington nor in Seoul they even try to hide the fact that the exercises are aimed against Pyongyang.

According to the legend of these exercises, deck aviation, cruise missiles from ships, as well as from the territory of South Korea, work out attacks on nuclear and missile facilities of the country, artillery positions, as well as on command and control systems of the troops and the most significant enterprises of the defense complex.

Apparently, the fig leaf of peace this time, as unnecessary, was discarded. Visual evidence of this is the presence of a division of sea saboteurs on board the Reagan. Maybe that's why CIA head Michael Pompeo 21 October cynically said that if, they say, Kim Jong-un is suddenly not, then do not run with questions to his department.

The position of China, which has always always tried not to burn all the bridges in relations with Pyongyang, adds to optimism, but to preserve even those prohibited by UN sanctions. So, a few years ago, everyone was perplexed by the visits of military ships from the Celestial Empire to the DPRK, as well as other military exchanges. Now in Beijing, they are not only striving to express their zeal in fulfilling international restrictions - which is worth only one instruction to close all joint ventures with North Koreans, but they even line up the symbolic red carpet before the overseas "partners" - the same "Ronald Reagan" before taking the course in the Sea of ​​Japan, visited for the first time in several years in the harbor of Hong Kong.

The aforementioned US-South Korean exercises were officially completed on October 20, but they do not smell like a decrease in tension.

Steel monster "Ronald Reagan" will be registered for a long time in the harbor of the beautiful southern city of Busan, on the coast of the Sea of ​​Japan. Moreover, his fellow "Theodore Roosevelt", possessing almost comparable power, will soon join him. The pleasure for the residents of Busan is below average, because American sailors are used to leaving radioactive garbage in foreign harbors. And all these movements of ships, which they usually try to conceal, were undertaken for the sake of supposedly ensuring the safety of the head of the White House, who after arriving in Tokyo plans approximately two days, approximately 6-8 in November, to pay the first official visit in many years to the Republic of Korea .

However, two whole armada of ships to protect one person, even the first person of the state, is it too? Perhaps, the unpredictable Donald would not think to appear on the Korean Peninsula, but would give the order to use the forces drawn here against the DPRK, because this spring, despite the convenient moment, the military scenarios were never implemented.

So, the war on the Korean Peninsula can be considered a matter of the next two weeks.

The only pity is that the South Koreans seem to have no awareness of the danger hanging over them. Most of them offer to quickly resolve the issue with Kim Jong-un using military force, and journalists who reveal the secret of transferring American aircraft from the US mainland are accused of betrayal. And in vain.

Ctrl Enter
Noticed a mistake Highlight text and press. Ctrl + Enter
We are
What you didn't want to know about EnglandKim Jong-un - a new mystery of North Korea
42 comments
Information
Dear reader, to leave comments on the publication, you must to register.