Having a T-90 is of little help to the igilovtsa

October 27 2017
14
“Islamic State *” for the first time managed to take over Russian a tank T-90A, capturing it from the Syrian government forces. This vehicle is the most advanced armored vehicle available from ISIS *. Will terrorists be able to take advantage of this Russian weapons and if so, in what way? 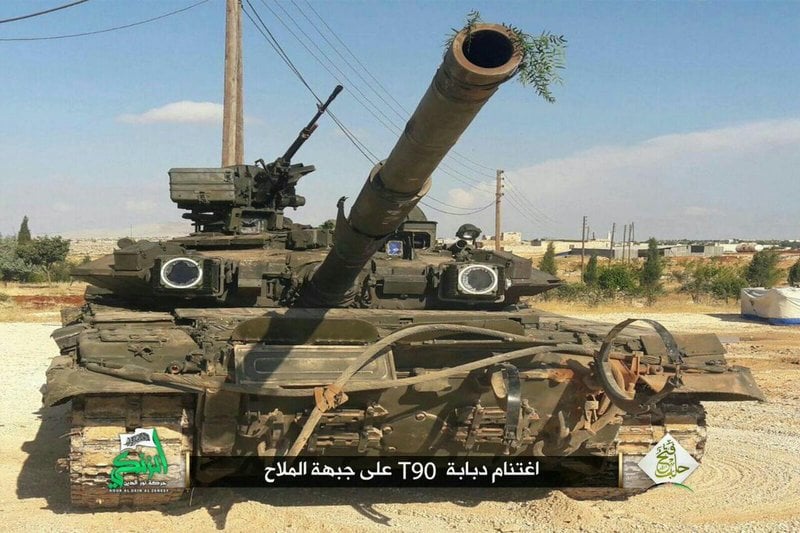 In Syria, the terrorists of the “Islamic State *” on Wednesday captured the T-90A tank, which was supplied by Russia to a serviceman of the Syrian army. The tank fell into the hands of terrorists during battles east of the city of Meyadin.

This is not the first time that Russian armored vehicles, supplied to the SAR government forces, fall into the hands of ISIS *. In particular, last week the Syrian agency SANA published a video of weapons and military equipment (IWT), which was captured by the Igilovites from the Syrian army, but then was beaten back. And on the video among other weapons and military equipment you can notice the T-55 and T-62 tanks.

Militants do not understand which tank captured

But the T-90A falls into the hands of the "Islamic State" for the first time. This is a modification of the Russian main battle tank T-90, which is made with 2004 year. It was in her car began to be equipped with an engine B-92C2 1 power thousand liters. pp., which weighs only 47 tons and allows it to reach speeds of 70 km / h.

In addition, a welded turret instead of a cast one was installed on the T-90A, reinforced booking for the upper frontal part, a new system of fire-fighting equipment installed, thermal sights updated. The automatic loader was improved, and a new weapon, the 2А46М-5, was installed.

It is curious that the militants could not even realize the fullness of their "happiness" by mistaking the captured tank for the T-72. “The T-90 was created as a deep upgrade of the T-72. Sometimes they are confused, but still there are differences, ”said military expert Alexei Leonkov to the VZGLYAD newspaper.
“The first difference is in the armament complex. For the T-90 was developed a slightly different gun than it is on the T-72. The second is that the T-72 dynamic protection was set to “Contact”, and the T-90 was set to “Contact-5”. And when the T-90AM modifications went, they started putting Relic. The difference is also in the fire control system, the source explained. - But the most important difference is in the tower and in the defense of this tower. The T-72 has a cast round tower, while the T-90 has a welded tower, it is angular, because the protection complex gives such angularity. ”

Capture T-90 ISIS succeeded, but can they use it?

Militants are actively using tanks, Andrei Frolov, an expert at the Center for Analysis of Strategies and Technologies, told the VZGLYAD newspaper. “We are talking about several modifications of tanks: T-72, T-55, T-62. “Abrams” was also captured by them, but they did not use it, it’s too complicated and expensive to operate, ”he said. “Tankers in the ranks of ISIL militants can be recruited from the Syrian government army, as well as from among those who came with similar experience from other countries,” the expert stressed.

However, can any tank driver be able to control the T-90? “To get a tank, you need to be able to work with various instruments, navigation, fire control system. For example, in the front rink the tank has a special sensor that allows the tank to shoot on the go. The sensor needs to be properly configured so that a tank at 5 – 10 kilometers can conduct aimed fire, ”Leonkov said. According to him, igilovtsy are unlikely to be able to do this: “They will not be able to use all the capabilities of the tank. It is designed for qualified professionals. "

If the ISIS T-90 falls for the first time, then other groups have already managed to seize such tanks. In 2016, the group Harakat Nuriddin az-Zinki captured T-90A under Aleppo and then sold it for half a million dollars to Dzhebhat an-Nusre. The capture of another T-90 "en-Nusra" carried out independently in the same year. Subsequently, the Syrian army repulsed one tank, and destroyed the second.

“The Islamists did not master the T-90 captured in that year from the Syrian troops. He simply moved and fired, and not on the move, but stopped and fired. The advantages of the tank were not used, ”Leonkov stressed.

What will Igilovtsy do with a tank?

“There is no risk that the tank got to the militants,” Frolov said regarding the possible leakage of Russian technology. The Islamists themselves do not have the resources to copy a tank. In addition, T-90A is still one of the earliest modifications, and most of the systems installed on it are no longer secret.

As for the options for using the machine, they are diverse. “Who knows in what condition T-90 got to them? They can use it as a tank, and can remove the turret, fill it with explosives and use it as an explosive device. They have already used T-72 in this way. In any case, hitting one tank will not give them any advantage, ”added the source.

Leonkov is sure that selling this tank is also unlikely to succeed. “To sell it somewhere, you need to organize logistics. Suppose they decided to sell the Americans, because this is a whole operation that needs to be carried out, which will be more expensive than the tank itself, ”he said.

There are no anti-theft systems on tanks, Leonkov noted. However, he still has some protection against capture. “Hatches on tanks are locked with a special key, they can be locked. The problem is that the Syrian tankers for some reason believe that the tank hatch should always be open, ”said the expert, suggesting that for the Syrians this is an indication of particular coolness.

However, the tank is unlikely to stay at ISIS for a long time. “He will either be found and returned, or be beaten,” Leonkov pointed out.

Ctrl Enter
Noticed a mistake Highlight text and press. Ctrl + Enter
We are
Strategy: life or death!The best main battle tanks of the world 2012 of the year
14 comments
Information
Dear reader, to leave comments on the publication, you must to register.