The Kurds reported that they repelled the Iraqi army off Mosul


According to the Kurdish Security Council, the Iraqi security forces and the Al-Hashd al-Shaabi militia launched an offensive in four directions on a peshmerga position in the north-western part of Mosul on Thursday morning. 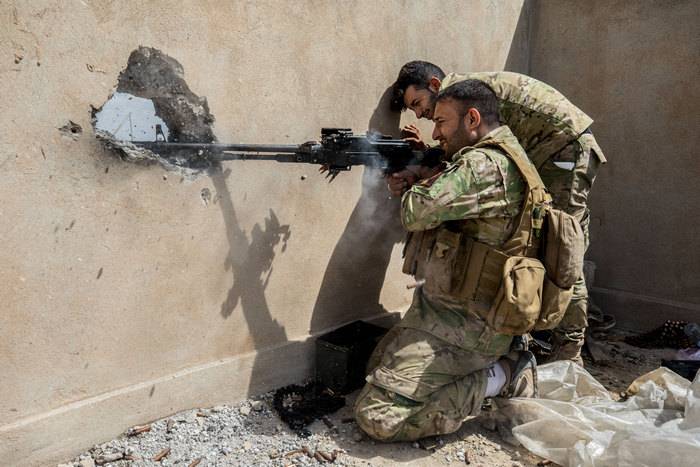 Peshmerga repelled attacks, destroying three tank, five American (Army SUVs - eds.) Humvee and one Badger (infantry fighting vehicles - eds.)
- Said the message of the Security Council on Twitter. The statement noted that the Iraqi security forces, retreating, continued to fire at the positions of the Peshmerga.

The Kurdish authorities emphasize that Iraqi forces continue to use American weapons intended to fight the Islamic State terrorist group *.

Earlier, the government of Iraqi Kurdistan offered Baghdad to cease fire and begin a dialogue, expressing its readiness to freeze the results of the referendum on independence. As noted in the statement, the confrontation between the Iraqi and Kurdish forces (Peshmerga), which began on October 16, caused damage to both sides and could lead to continuous bloodshed. The Iraqi government has not yet responded to the initiative of the Kurdish autonomous region, reports RIA News.

Ctrl Enter
Noticed oshЫbku Highlight text and press. Ctrl + Enter
We are
Reports from the militia of New Russia for 29 August 2014 of the year
Military Reviewin Yandex News
Military Reviewin Google News
32 comments
Information
Dear reader, to leave comments on the publication, you must to register.