October 31 2017
22
When the enemy conducts "Winter Strategic Cannes" during the Second Prasnysh operation [12] the troops of the 12 and 1 armies of the North-Western Front were able to cover the northern flank of the "Polish Balcony". 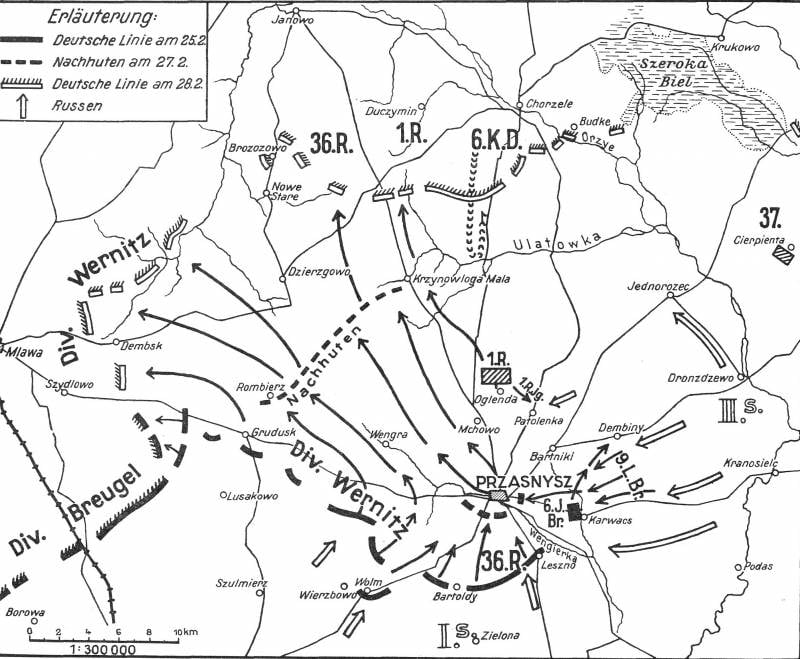 The operation was carried out to stabilize the strategic situation in the north-west direction. The strategic importance of the Second Prasnysh operation was extremely great. The goal was achieved - the Russians won a decisive victory over a powerful adversary. It was possible to largely eliminate the consequences of the unsuccessful Second August Operation.

In March, the army group M.-K.-V. von Galvitsa, supported by units of the German 10 Army, repelled a Russian counteroffensive. The Germans had to stop the attack on Osovets and the Beaver line. But stabilization was achieved only within a month - as early as April, the German invasion of the Baltic States began.

The result of the Second Prasnysh is indicative of the trophies of the winners (captured before 14000 people - this “record” the French would “beat” in Champagne in just over six months, 58 guns, 100 machine guns and 2 mortars). 2 corps of Germans (1-th reserve and Tsastrova) were defeated and largely destroyed - one in the city of Prasnysh, the other, covering the retreat of the remnants of the German troops. The total losses of the Russian 1 and 12 armies are 40000 people, the German 8 and 12 armies are 60000 people (and the Germans admit the loss only in the city of Prasnysh 13000 fighters [13]).

In order to capture the Russian troops in Poland, the enemy began the implementation of Summer Strategic Cannes.

In the north, the army group Halwitz and the 8 army were supposed to hit the Neman (the group sought to reach the area west of Osovets through Pultusk and Prasnysh), and in the south - army group A. von Mackensen from the German 11 and Bug and Austro-Hungarian 4 armies on Vladimir-Volynsky (the group was advancing between the Vistula and Western Bug rivers across the Hill - Lublin in the direction of Brest-Litovsk). Thus, a powerful strike was planned under the base of the Polish ledge with the aim of destroying the Russian troops there. This grand maneuver was supposed to lead to the encirclement of several Russian armies at once.

And in this situation, the Polish theater of technology again played its special role - and above all its flanks. At the first stage of the "Summer Strategic Cannes" on the northern flank of the "Polish ledge" took place the Third Prasnyshskaya [14], and on the southern flank - Krasnostavskaya and Hrubieshovskaya operations. 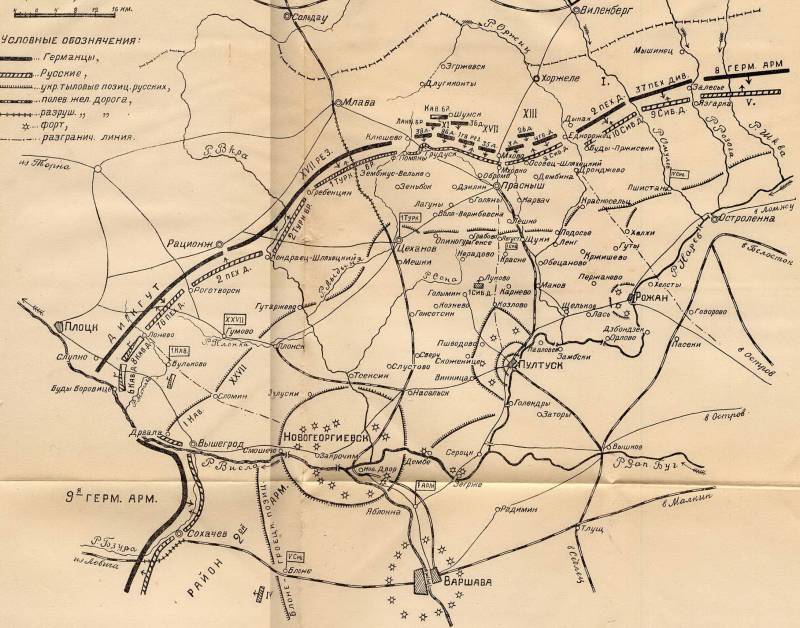 Despite the fact that in the Third Prasnysh operation on the direction of the main attack, the enemy had three and a half times more infantry and seven times more guns (German 100000 with 864 guns against 2 and 11 Siberian rifle divisions - 27000 Russians with 120 guns), the enemy group offensive was foiled. Due to the stubborn resistance of the Russian troops for almost a week of fighting, the Germans were able to advance only 30-35 km, achieving tactical success at the cost of heavy losses in people and material resources. Russian troops were not defeated, but only shifted from their positions and pushed to the p. Narew - they consolidated the front, creating a dense defense on this natural frontier. Operatively Third Prasnysh - the success of the Germans, but strategically he contributed to the Russian plan to competently evacuate wealth and withdraw troops from Central Poland. Thus, the strategic success remained on the Russian side - they kept on the line r. Narev. The third Prasnysh put an end to the development of the northern claws of Summer Strategic Cannes.

The losses of the Russians in this operation are up to 40000 people (which is primarily due to the overwhelming superiority of the enemy), including those killed near 12%, wounded over 37% and about 50% missing (including prisoners around 40 officers and more 16000 privates - many were captured, lagging behind their own during the departure). Lost 12 guns and 48 machine guns. Losses of the Germans reached 25% of the group Glavitsa - that is, more than 40000 people [15].

In the course of Krasnostava [16] and Hrubieshovskaya operations [17] the enemy failed to achieve a tactical breakthrough of the front of the Russian troops. 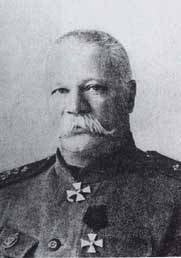 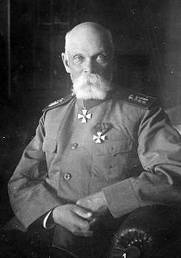 The southern armies of the North-Western Front slowly retreated (for example, during the 7-day Hrubieszow operation, the Bug army advanced only 16 km, the result of the Austro-Hungarian 1 army was even weaker), inflicting serious blows on the enemy, reducing his offensive rates. The Russian Imperial Guard showed its combat power and tactical power in these battles. But due to the unfavorable situation on the right flank of the 3 Army, the tactical success of the Russian Guards Corps was not transformed into operational.

The German guard in this operation suffered major losses. Thus, from June to mid-August 1915, according to German data, the 1 Guards Infantry Regiment of the 1 Guards Division lost 53 officer and 3005 lower ranks, and the 3 Guards Infantry Regiment - 17 officers and 2116 lower officers . e. parts actually changed their combat strength. The Austro-Hungarian units were battered before the start of the battle. Thus, according to Austrian data, the 6 Army Corps only in 3 battles in July 1915 lost 4,7 thousand people (including 1,2 thousand killed) [18]. The offensive head of Army Group A. Mackensen gradually exhaled.

During the Hrubieszow operation, Russian troops captured up to 5000 prisoners, several guns, at least 15 machine guns. Yu. N. Danilov described these fights as protracted and very stubborn, often reaching hand-to-hand combat and costly for both sides. The Russians gradually retreated to the south section of the Advanced Theater - to the north, to Lublin and Hill, continuing to challenge every step of the enemy [19].

At the second stage of the “Summer Strategic Cannes” on the north face of the “Polish Balcony” Narew operation [20] decided the fate of Warsaw. The Germans could not achieve the main goal - to get through to Sedlec. During the 11-day persistent battles, the enemy group was only able to capture several bridgeheads on the left bank of the r. Narev. The task of the Russian armies was defense - to gain time needed to withdraw the 2 and part of the forces of the 4 armies from central Poland. The Narev operation was characterized by a significant length of the front (over 140 km) and an abundance of natural obstacles (waterlogged areas, pp. Narev, Beaver, etc.). During it, Russian troops captured up to 2000 prisoners and several machine guns. 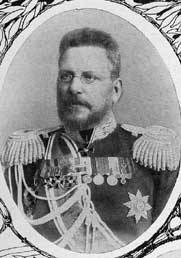 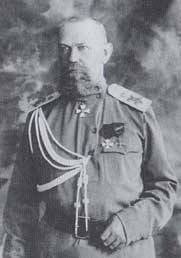 While the armies that were on the flanks of the “Polish balcony” were holding back the enemy, the troops in central Poland 21 July left Warsaw and slowly retreated to the Sokolov – Siedlec – Lukow railway line. By the end of this month, the troops of the North-Western Front retreated to the Osovets – Drogichin – Vlodawa – Turiisk front, which decided the fate of Novogeorgiyevsk fortress.

The enemy’s plan to arrange a strategic “cauldron” for Russian troops in Poland failed. A huge breach in the center of the Eastern Front could have disastrous operational and strategic consequences, leading to the early curtailment of Russia's participation in a world war. Russian army out of the "bag" Advanced Theater. The strategic rollback of the Russian troops was carried out according to the plan and was associated with the solution of the most important economic and strategic tasks, of which the main one was the withdrawal of troops and the evacuation of resources from the “Polish balcony”. 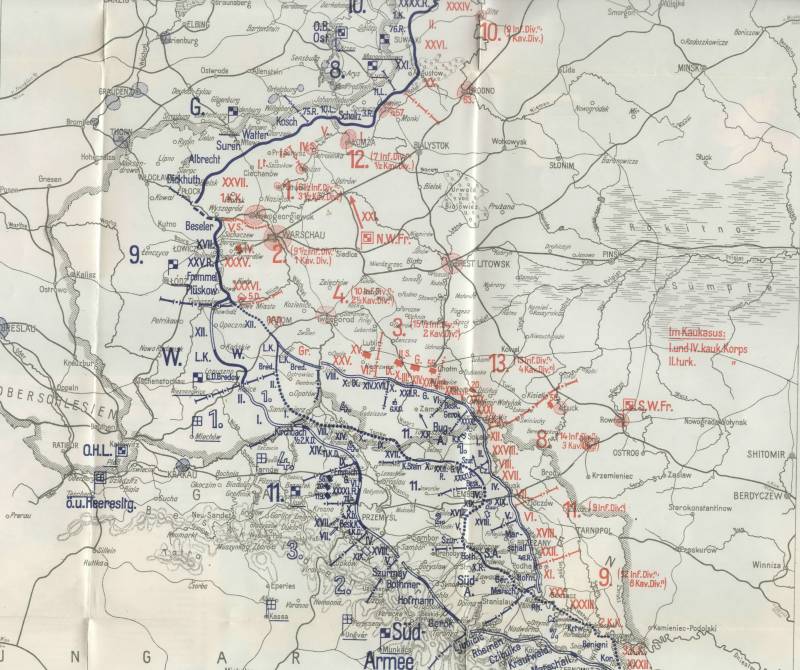 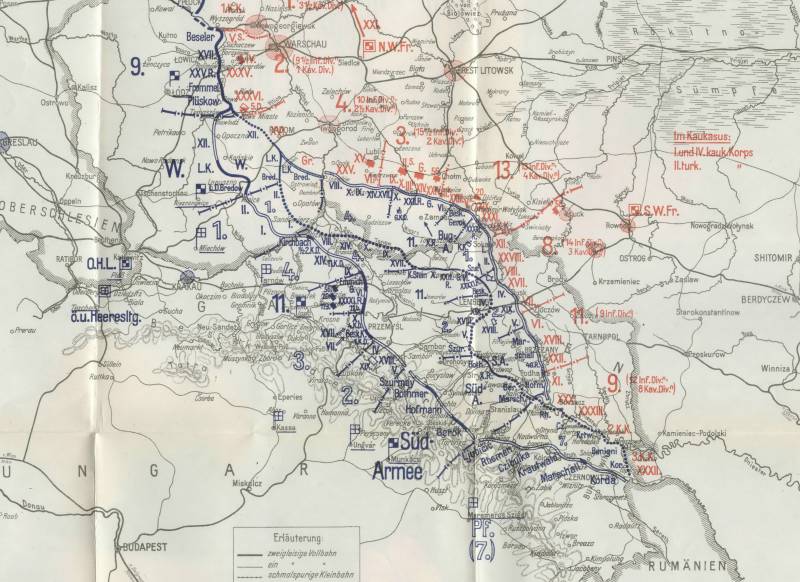 7 schema. The combat disposition of the Russian southern army group of the NWF and its opponent on the southern face of the "Polish balcony" to the beginning of the Lublin-Kholm operation. Reichsarchiv. Der Weltkrieg 1914 – 1918. B. 8. Berlin, 1932

But the loss of the Polish theater of war had an extremely negative impact on the situation on the entire Austro-German front: the connectivity of the Eastern front was broken and the maneuvering ability of the Russian army was largely undermined, largely based on the Polish railway network. 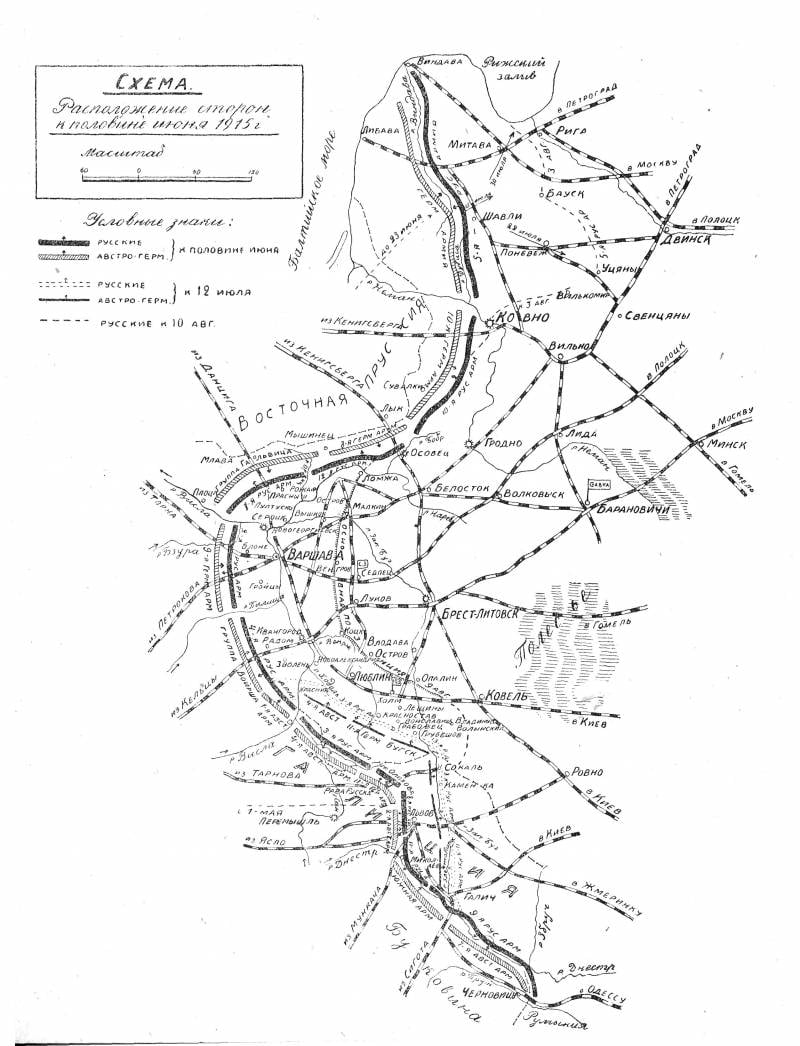 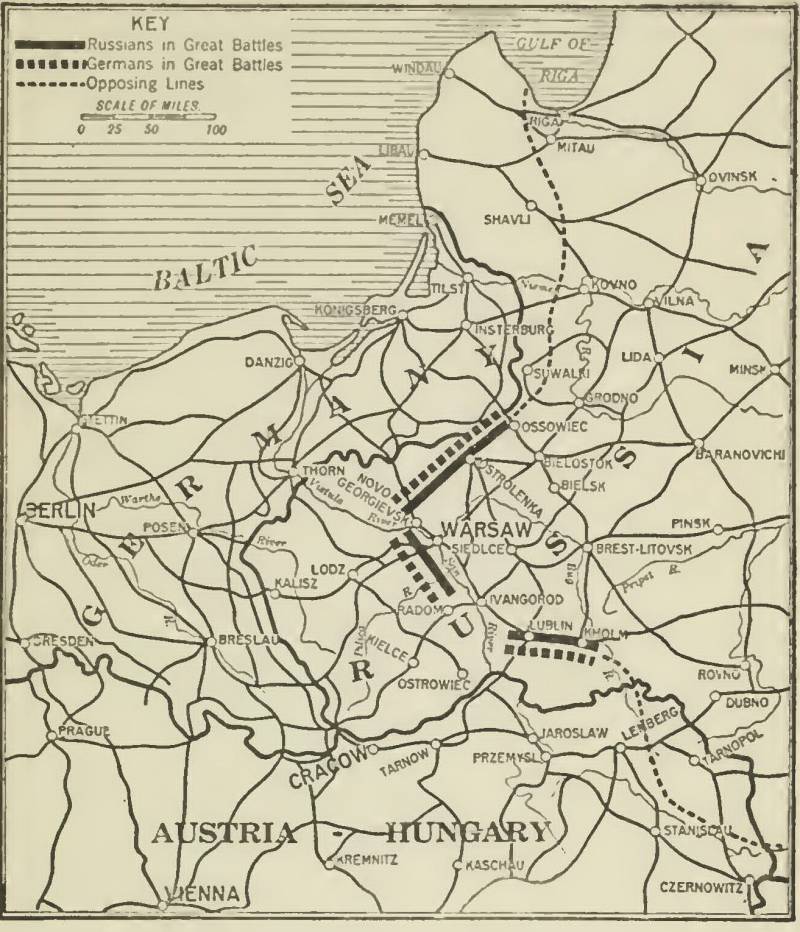 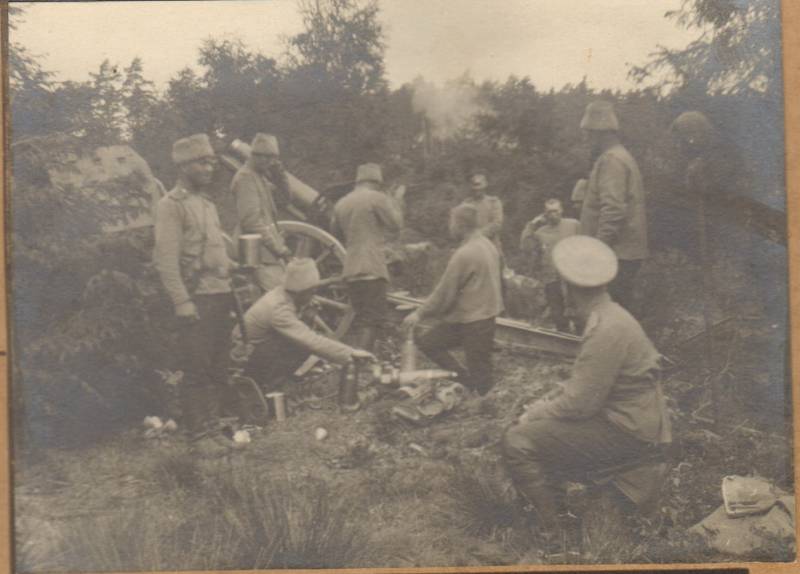