October 26 2017
59
Space forces of the Russian Federation successfully tested a maneuvering military satellite-inspector capable of approaching other orbiters and inspecting them, according to News. 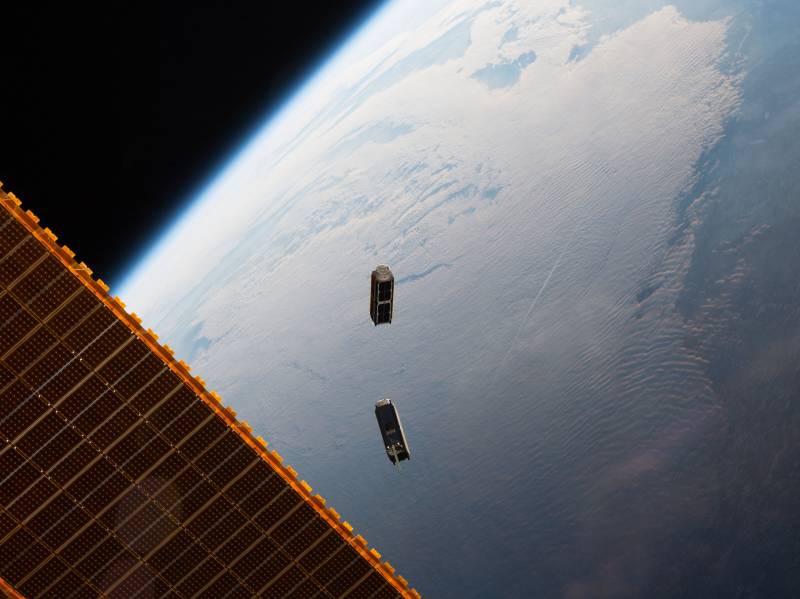 Such vehicles will become an important element of the Russian orbital grouping, they will play the role of a deterrent tool in the space military race, experts say.

The Defense Ministry told the newspaper that "during tests on the management of a maneuvering military satellite, ground and orbital communications were tested, ballistic calculation techniques and new software were tested." According to the military, “the capabilities of the Space Forces on automatic satellite separation from the platform, remote control of its flight, on-board equipment, including observation tools, as well as on the transmission of the received data to the ground and their processing, are confirmed.”

According to the newspaper, during the tests, the maneuvering satellite undocked from the Cosmos-23 space platform launched on June 2017 of the year and began an autonomous flight. First, he changed the orbit, and then managed to return to the platform and inspect it.

Projects for the creation of spacecraft capable of changing their orbit from the Earth from a command and moving closer to other space objects are also being implemented by the United States and China.

In the event of a global conflict, it is extremely important to destroy the enemy’s satellite constellation in order to deprive it of communication, navigation, and reconnaissance capabilities, and therefore the idea of ​​creating such fighters was born. In the USSR, for example, tests were conducted, during which one satellite flew up to another and exploded, hitting the target with splinters. After these experiments, there were even attempts to create armored satellites.

According to the expert, the main task of the orbital “inspectors” is to establish the purpose of the vehicles deployed by a potential enemy in orbit.

According to the appearance of the object, its design, the location of the equipment, you can make assumptions about its purpose. In addition, the satellite inspector can easily combine the functions of inspection with the functions of a fighter: approached, examined, fired a rocket, departed,
he explained.

At the same time, Mukhin stressed that Russia would need fighter satellites only in the event of a conflict, and there is enough work for inspectors in peacetime.

Such an apparatus requires the ability to actively maneuver between orbits, this is exactly what the military is now working on during the tests. We have such a system will be a serious deterrent to potential opponents. They will know that the RF can check whether the functionality of their devices is consistent with the stated
added an expert.