In the clothes of the net into the battle to go out.
Here is a tower shining with gold.
There is a lion, there is a leopard and a fish in a battle emblem.
Peacock's tail serves as an ornament.
And someone decorated the helmet with a flower in consolation ...
There the rider's black mourning crowns the flag,
And the other has a white, blue and green sign.
The third surco is crimson, glittering with lilies,
And someone, seeing this, trembles to himself ...
(A poem of the thirteenth century "Galleran". Author's translation from English) 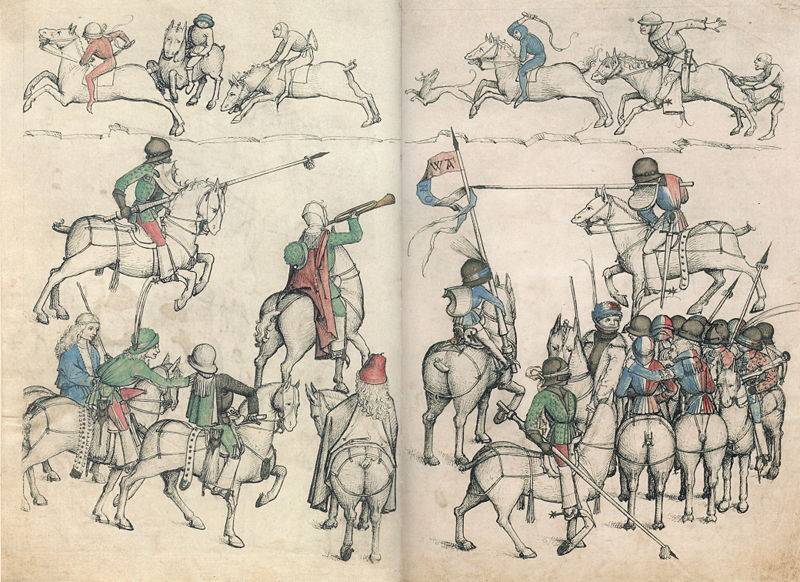 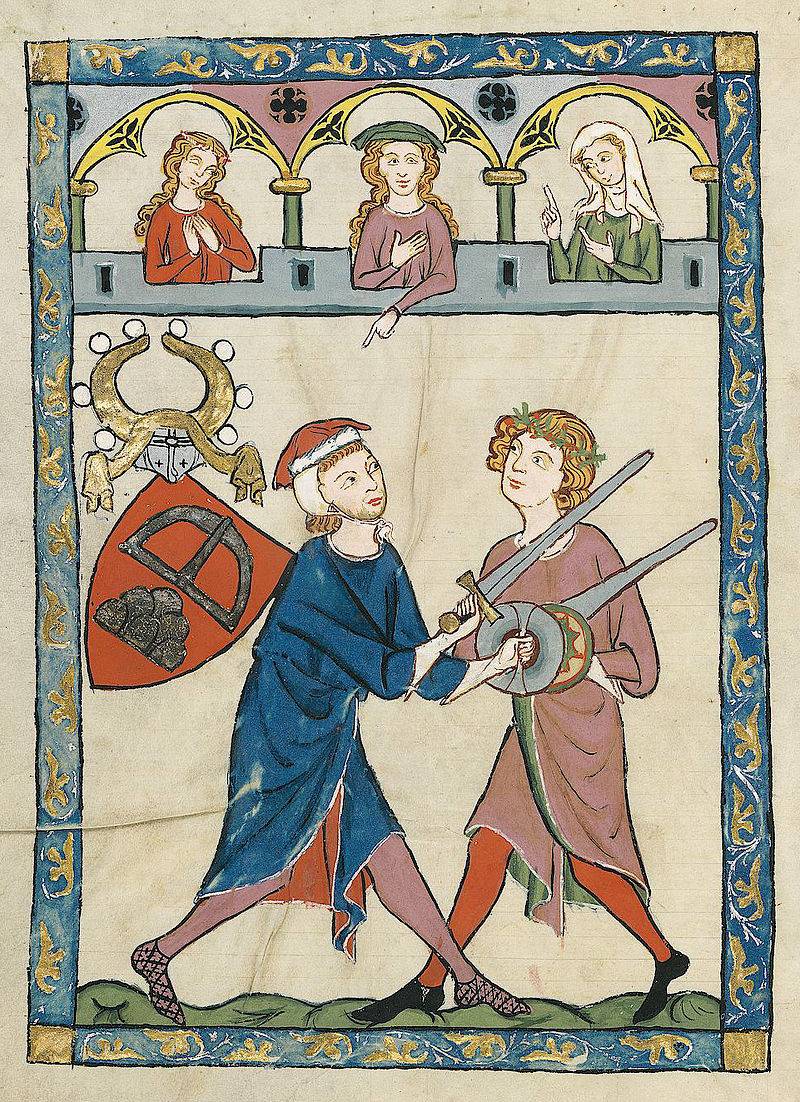 A drawing of the Swiss Manes Code (around 1300) shows us two warriors during a duel that takes place in the presence of women watching him, who approve of their applause. Weapon competing at the race are obviously blunt swords.

In the “Ceremonies of Fights” code, you can see that knights wear solid-forged plate armor, and their heads are protected by tournament helmets of army. They are wearing heraldic robes over the armor, and their horse blankets also look like. Then, by the middle of the 15th century, the armor for the “ancient German foot battle” had changed significantly. It has become fashionable to use different types of weapons. As can be seen in the illustrations from the book about the tournaments of Emperor Maximilian I, at that time they began to use not only traditional swords, but also such, let's say, not typical for the tournament types of weapons like mace, alspies, cuz, ax, various peaks and daggers , club, dyussak, ax, and even a battle chain. 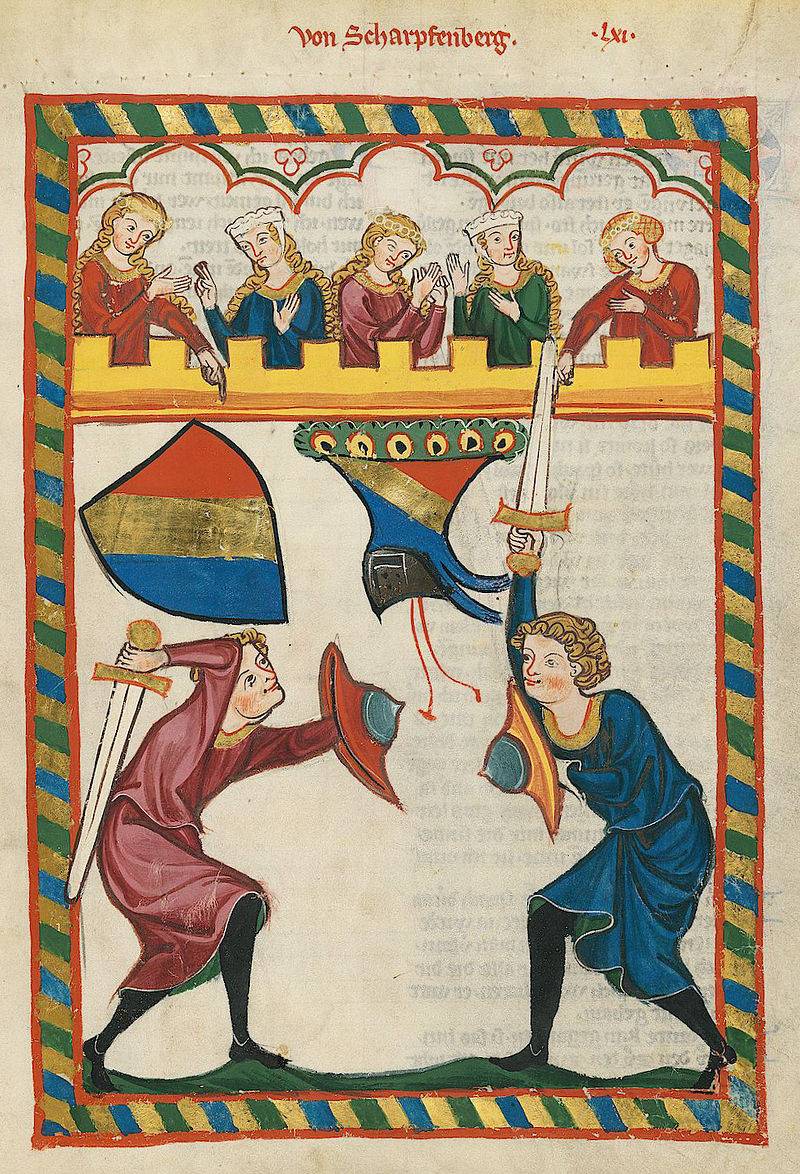 The armor has changed accordingly. Helmet - tournament armor with visor, having a spherical shape and a significant amount. He was screwed or tightly tied with straps to the breastplate and backrest. The purpose of such a device, as well as in a special helmet for a tournament on clubs, is to prevent the knight’s head from touching directly with the helmet. Shoulders began to protect the armpits well, so they increased in size and began to reach the middle of the chest. Bracers of the traditional form, in the fashion of the time. Gloves with pointed gaiters also correspond to the traditions of this era. Knees are protected by knee pads. But the shoes are just leather and without spurs, by the year 1480 acquired wide and blunt noses, similar to rough peasant shoes. 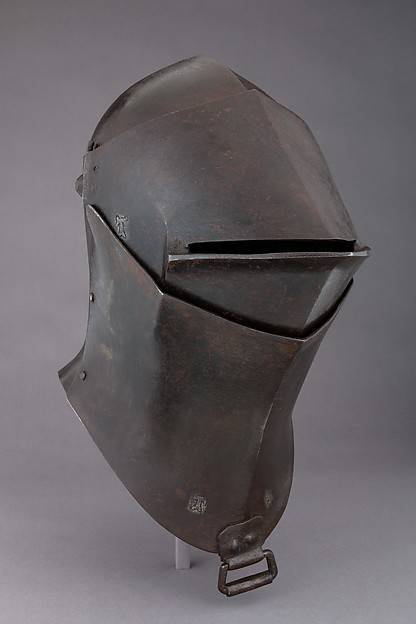 Arms for hand-to-hand combat, which spread at that time, first of all should include fist shields. A number of shields were on the edge of the steel hoop, which was a trap for the blade. In battle, they tried to fence this shield in such a way that the edge of the alpship or the blade of the sword was in the gap between this hoop and the shield and wedged. Well, in the meantime, using this, one of the fighters struck the other on the head, or on the side of the blade, in order to break it and thereby disarm its opponent. Sometimes on some fist shields they fastened several such traps. Umbons fist shields had a different shape. There is always a handle inside to grip it with your left hand; and at the top of the shield could be a long hook for a sling. In addition to kulak shields in those competitions where no spears were used, wooden hand shields covered with canvas were used, with the coats of arms painted on them. Honors spear tharch from tarcha for foot combat immediately striking. At first there was always a hole for the spear shaft. 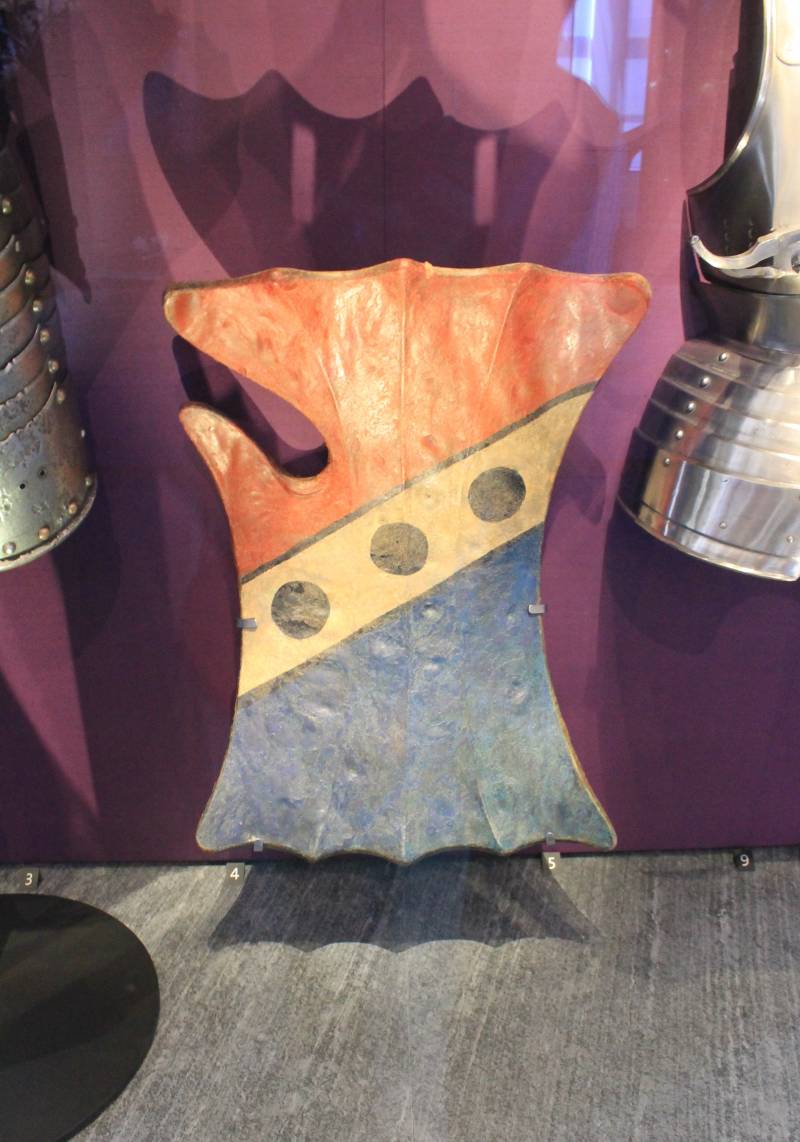 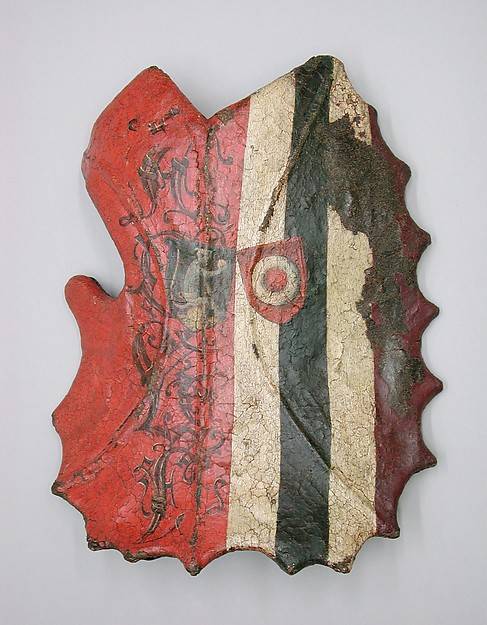 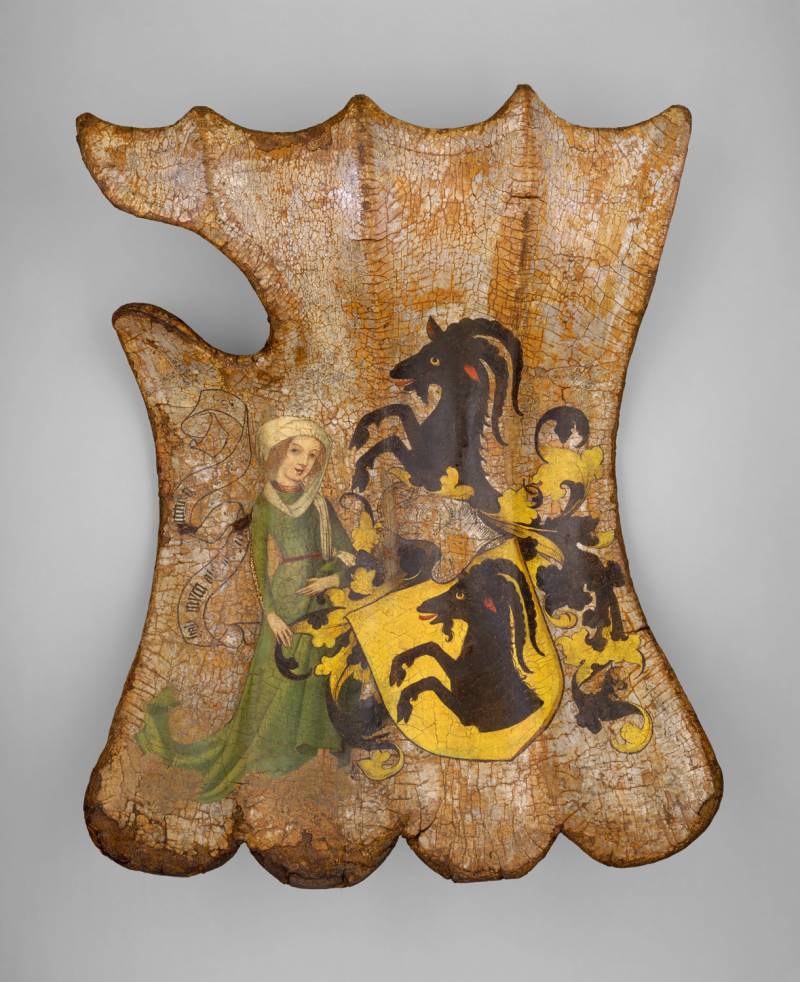 1450 g. Tarch from Germany, height 55,88 cm and width 40,64 cm. Made of wood, covered with leather, linen, then covered with a layer of putty and painted with oil paints. Belonged by the coat of arms, belonged to the family of Tririgel from Franconia. On the emblem the motto: “Accept me the way I am!” The figure on the back side shows St. Christopher, who defended from sudden death. (Metropolitan Museum, New York) 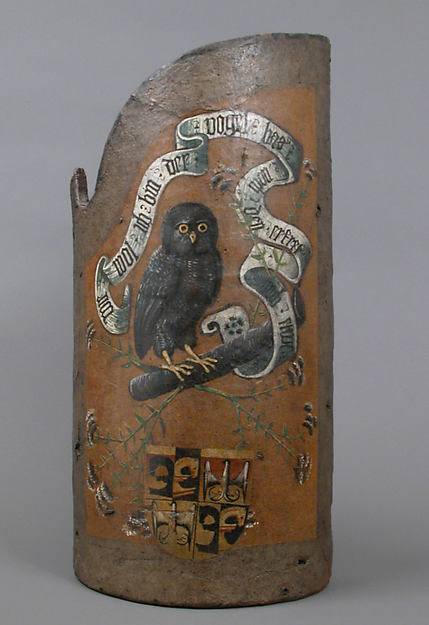 Whatever it was, but by the XVI century the “German foot battle” gradually lost its former attractiveness. Popularity gained a more spectacular foot tournament, somewhat similar to the old group tournament. The difference between the second and the first was only in that its participants fought through the barrier. Therefore, strikes to the legs and, consequently, the armor covering them, were excluded! 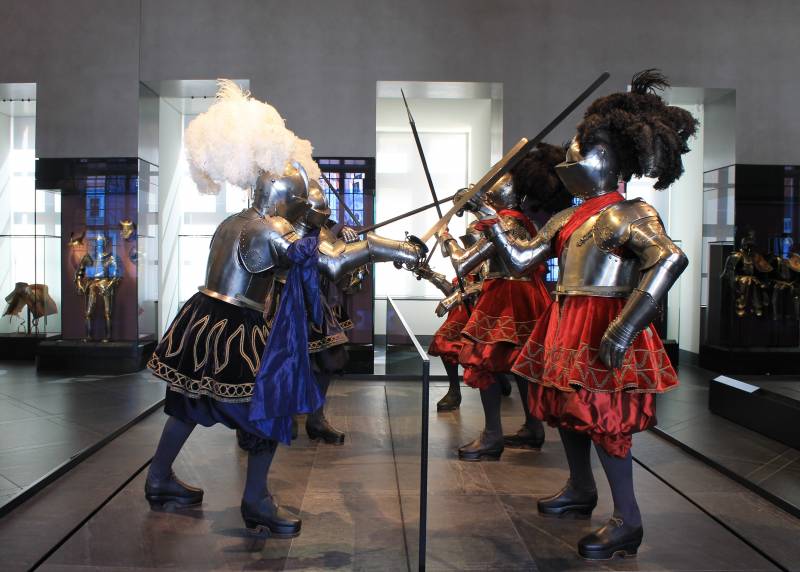 This is how this new foot tournament in the Dresden Armory is presented. As you can see, three pairs of knights are fighting - "red" against "blue". Mixed weapons: two pikes and four heavy swords. Since the combatants were divided by a barrier, it became impossible to hit them below the belt. 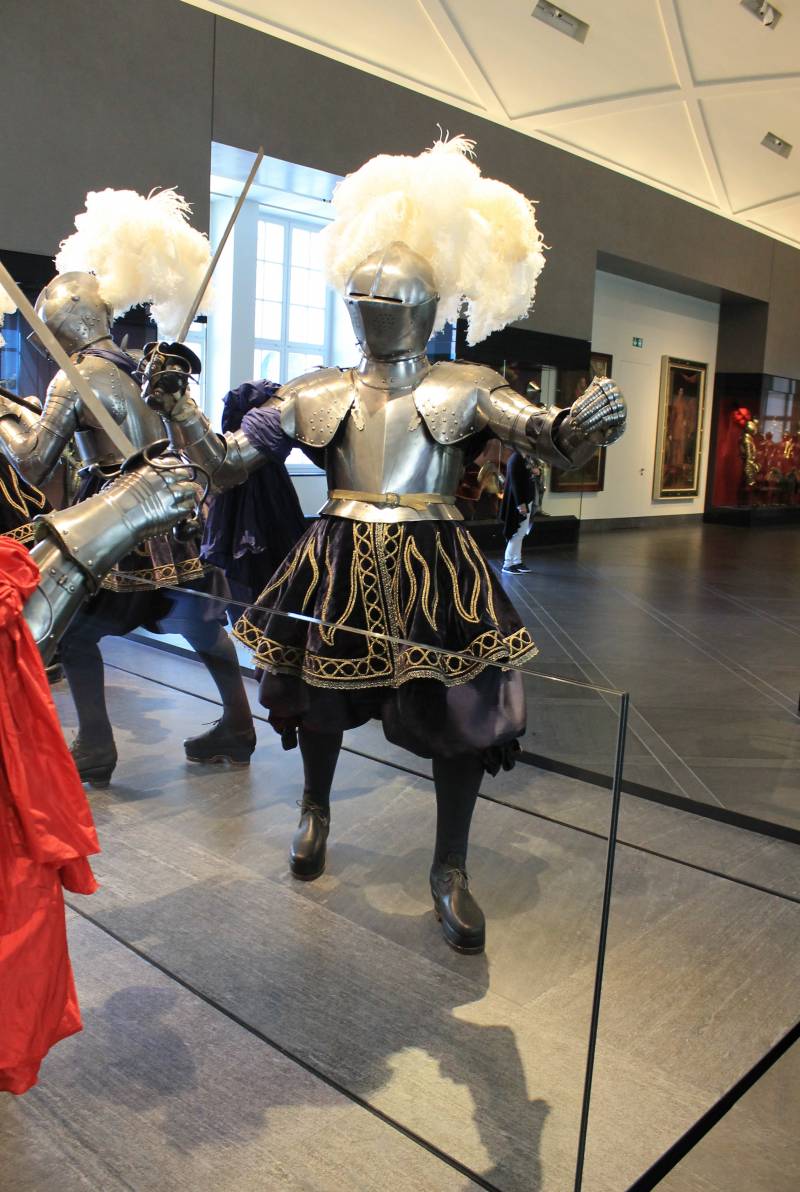 The perfection of the armor for this walking duel draws upon itself. In particular, it covers axillary shoulders with shoulders, plate gloves and tournament helmets with very narrow viewing slots. In other words, it was very difficult to hit your opponent, dressed in such perfect armor (yes, this task was not set!), So the victory was awarded to the least tired fighter (fighters) on points, that is, by the number of missed strikes. 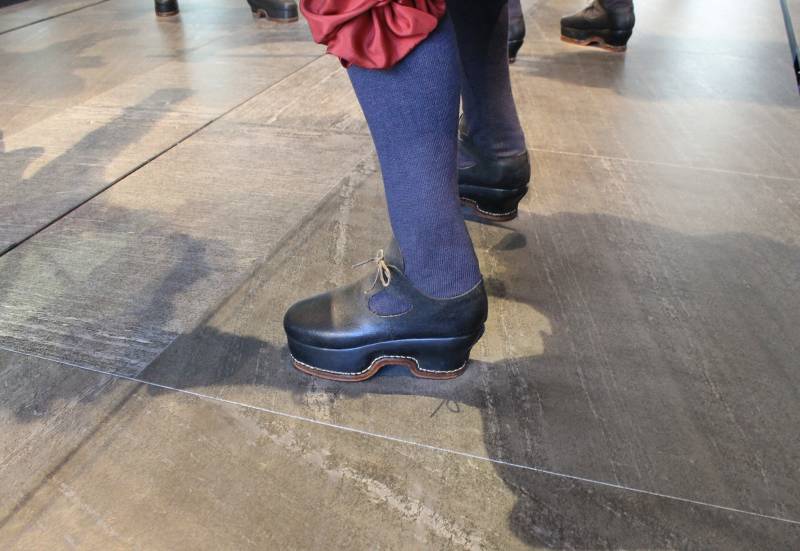 Fashionable shoes "on the platform" for the participants of this tournament match had blunt noses! 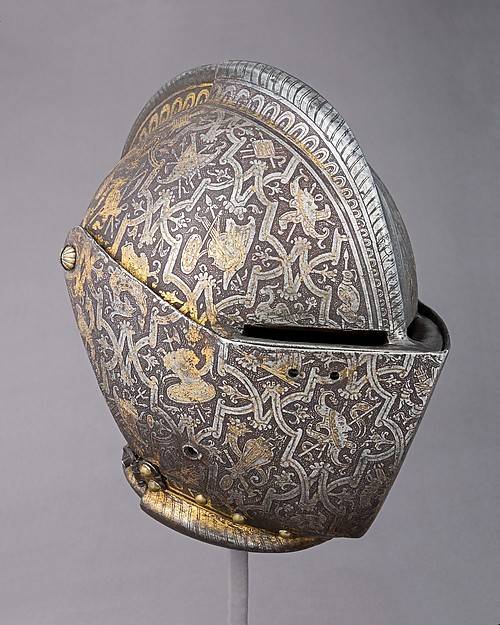 It is clear that since the cost of knight armor was already so transcendent, so-called headsets appeared, including several details. By changing them it was possible to use the same armor in several types of fights, both in horse and on foot. For example, Emperor Maximilian I had armor that could be worn at the equestrian tournament and fight in a traditional foot combat. For the latter, a “skirt” with a bell was invented on them, but in order that the rider could sit in the saddle, front and rear arc-shaped notches were made in it. In addition, armor for fighting through the barrier had a particularly wide shoulder pads, the already mentioned bell-shaped skirt and did not have a support hook for a spear. 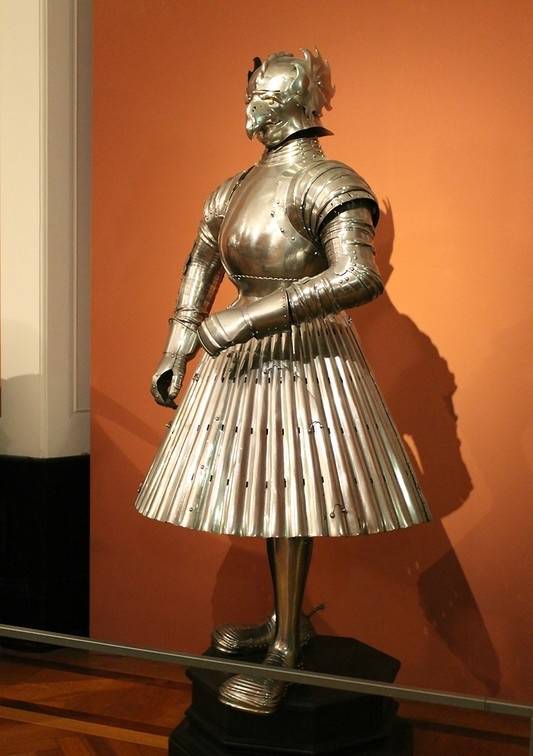 The armor of Emperor Charles V with a "skirt" for the foot tournament, with two notches, closed with removable sheets. (The Imperial Hunting and Arms Chamber in Vienna)

The silver and engraved armor of Henry VIII, too, with a "skirt" and a neckline on it for fit into the saddle. OK. 1515 (Royal Arsenal, Leeds)

We emphasize that the equipment of a knight for a fight on spears for a long time did not differ from the combat. Only in the XIV century the construction of the helmet and tarcha was improved precisely for participation in this tournament. From the middle of the 14th century, the left side of the helmet received an additional steel plate on rivets, equipped with a felt pad. But since the knights in the tournament did not want to die at all, in the 15th century the armor for the spear duel was completely modified. The new armor was given the name shtekhtsoyg - from the actual designation of this fight - Geshtech - to prick. In different countries, the armor had its own national differences. In particular, distinguish German and Italian shtehtsoyg. 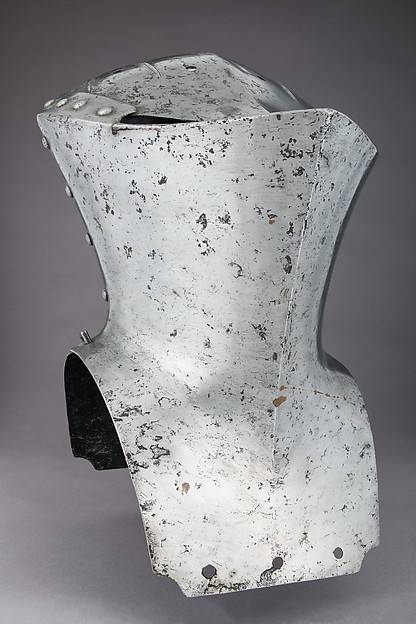 In the material “Armor for Knight Fun” (https://topwar.ru/111586-dospehi-dlya-rycarskih-zabav.html) there was already a photo of a toad-head helmet from the Metropolitan Museum in New York. This is the most recognizable and most frequently encountered in the information space model of such a helmet. There are several of them in this museum. Here is a less well-known and lighter sample weighing 6273.7 from the end of the 15th century from Germany.

German shtekhtsoyg received today a well-known helmet "toad head", similar to the old pot-shaped tophelm, but a different device. The lower part of it covered the face to the eyes, as well as the back of the head and neck, the parietal part of the helmet was flattened, and the front side had a wedge-shaped shape. Observation was carried out through a narrow viewing slot. On both sides, it had a pair of holes, which served to fasten the helmet decorations, and to fasten the balaclava. The helmet turned out to be a true boon. Having slightly inclined a torso, the knight rushing on the opponent, had a quite good review through a viewing slot of a helmet. However, it was necessary to bend over before the collision, or, on the contrary, to straighten up, as the blow of the opponent’s spear could not harm him in any way. In the first case, it falls on the flat top of the helmet, and in the second - on its wedge-shaped part. That is, the viewing slot was out of reach from the splinters of a spear scattered from the blow and its tip. 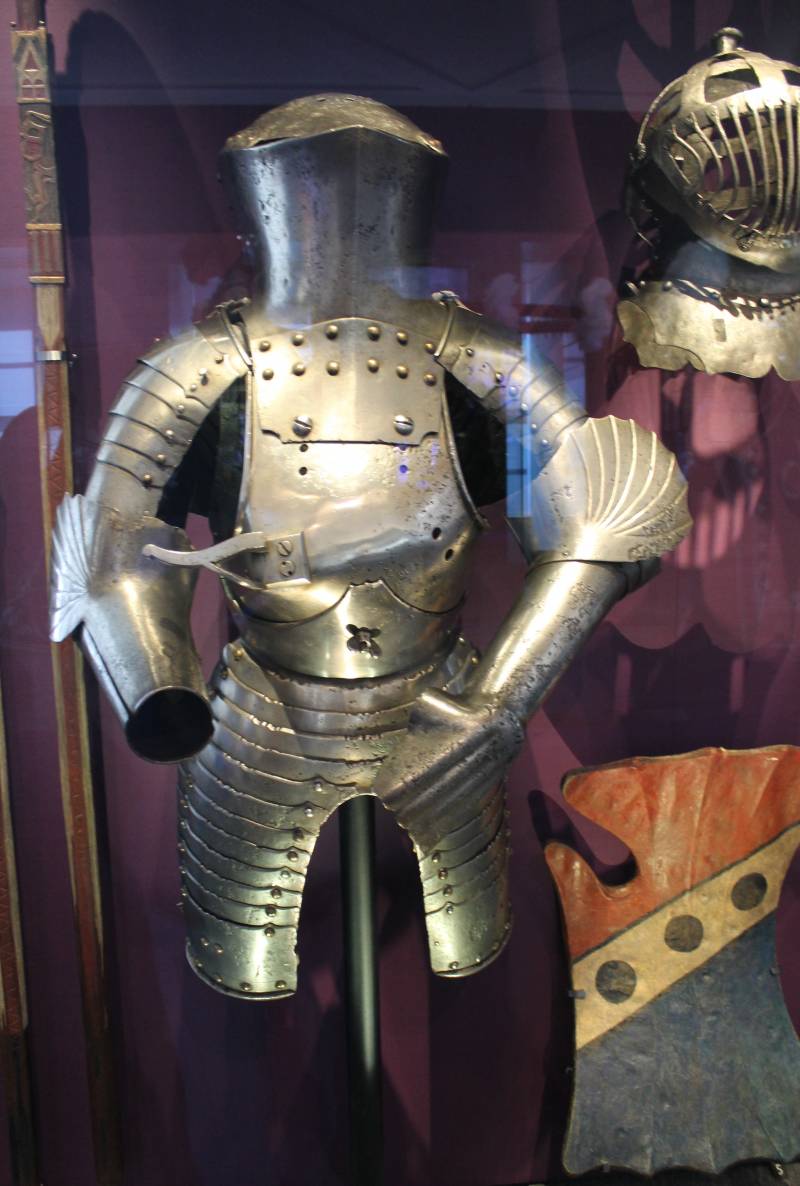 German shtekhtsoyg of the Dresden Armory.

The helmet was attached to the cuirass with three screws or a special clip, so that it turned into one. The connection of the helmet with the cuirass on the back is carried out with the help of a vertically positioned bolt, and it went down to the very back of the saddle, on which it rested, which facilitated the knight's landing. And of course the rigidity of all the connections was absolute! On the cuirass, on the right side, a massive spear hook was strengthened, and on its back, a bracket for fixing the spear. It was envisaged to mount the tarcha on the chest, so that it was no longer necessary to hold it with your hand. Leg protectors were provided by turtle-like metal stripes. It should be noted that it was customary to wear a skirt made of expensive fabric, decorated with luxurious embroideries and with beautiful deep folds. 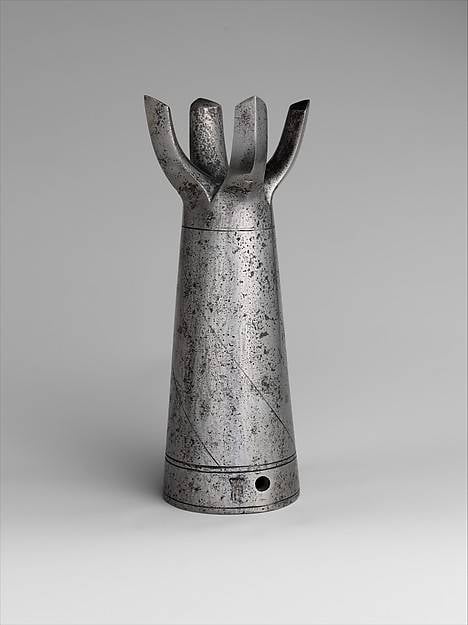 The spear for this duel was made of soft wood, had a standard length of 370 cm and a diameter of about 9 cm, with a crown tip. The crown had a short stem with three to four teeth. The spear had a protective disk for the hand.

Spurs have the same design for all types of tournaments. They were made of iron, the outer surface is often covered with brass. The shape of the spur is Y-shaped, usually with a star-shaped wheel. This form of spur allowed the rider to easily control the horse.

Italian shtekhtsoyg intended for the tournament on spears, called the "Romanesque". He differed from the German one, firstly, by the fact that the helmet on it was attached to the chest and to the back parts of the cuirass with screws. On the right side of the helmet was provided for a wide rectangular door, something like a window for access to the inside of fresh air. The shape of the cuirass was also changed, but the main thing was that the front and back began to be covered with a thin Kamchatka canvas and embroidered with heraldic emblems. A massive ring was attached to the left side of the cuirass to tie the quadrilateral tarch. But to the right of the belt was a leather cup, also covered with cloth. A spear was inserted into it before entering the lists. By weight, it was lighter than that used in German armor, so the need for a rear bracket to stop the spear in it disappeared.

French shtekhtsoyg was identical to the Italian. Only the helmet was slightly smaller in height, and to the cuirass it was fastened in front with a belt and brace, and behind with a belt with buckles. 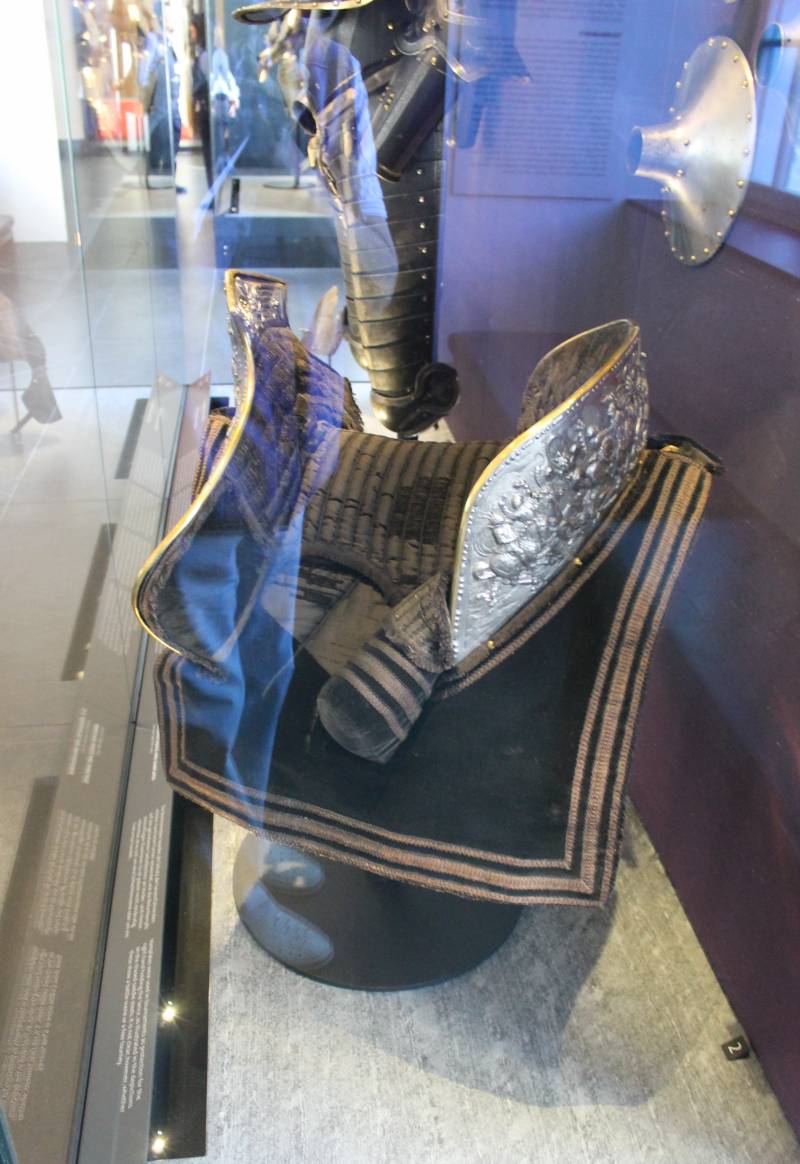 Horse saddle with metal-coated bows. (The Armory in Dresden)

English shtekhtsoyg had a very large similarity with the battle and tournament armor of the XIV century, since in England the process of updating the knightly tournament equipment was slower than on the continent.