Russia is to blame for everything. Opinion of military experts in a skirt 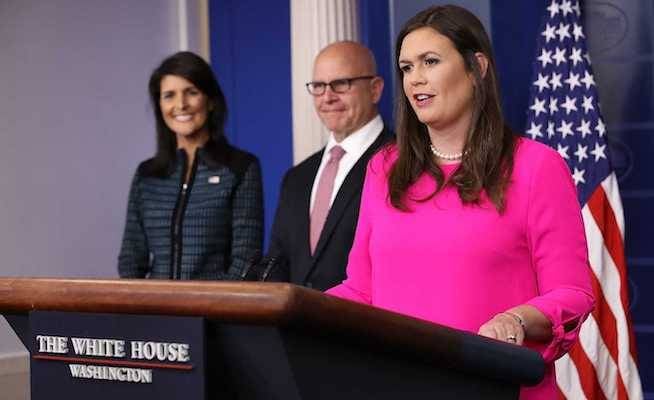 There is a perception that typical female nature is characterized by excessive emotionality and the lack of necessary competences in the discussion of serious issues. On the eve of the White House press secretary Sarah Sanders and the United States Permanent Representative to the UN Nikki Haley demonstrated that the thesis does not lose its relevance, and the American "politvumen" are not his exception.

On the eve of the "experts in a skirt," they undertook no less to search for the perpetrators involved in chemical attacks in Syria. The interest in “chemistry” among overseas representatives of the weaker sex was awakened by a meeting of the UN Security Council, during which Russia blocked a US resolution to extend the investigation period of himatak in Syria for one year.

The investigation of the incident with the use of poisonous substances in the city of Khan-Sheikhun should be completed on November 17. Previously, the Russian side has repeatedly questioned the independence of UN specialists, reporting that events are being held in the interests of certain individuals. One of the main subjects of criticism was the refusal of experts to take samples from the Shayrat airbase, which allegedly carried out a chemical attack.

Despite the fact that Russia's decision not to extend the work of the commission looks like a rather logical measure, women from the Donald Trump team have their own vision of the situation. The United States Permanent Representative to the UN, Nikki Haley, said the following about this: “The Russian veto has once again shown that Moscow wants to side with dictators and terrorists who use this weapon". A statement made almost like a carbon copy of the previous one was also made by the press secretary of the White House, Sarah Sanders. Having accused the Syrian authorities of using chemical weapons and Russia's lack of participation in this process, Ms. Sanders concluded: "We will continue to counteract this."

Recalling the expression “girlish memory”, two women representing the interests of the country at the international level need to know that the latest arsenals of chemical weapons, under the control of representatives of the IAEA, were removed from Syria in 2014 year. However, the lady certainly informed of this fact and lined up charges that the official authorities of Syria could get chemical weapons illegally.

Even if this was presented in theory, the use of prohibited weapons was unprofitable for government forces throughout the conflict. As the events in Khan-Sheikhun showed, the culprit of which the “independent” commission could not be found, the main beneficiary in such situations are the forces of the international coalition, which, without waiting for the conclusion of the experts themselves, designate the persons involved and their punishment.

Summarizing, if in the near future a chimataka is carried out on the territory of Syria, the United States and the allies, taking advantage of this pretext, will increase their intervention. At the same time, there are all the prerequisites that such a scenario will be implemented in practice.

So, on the social network Twitter, periodically there are reports that foreign-made toxic substances were repeatedly transported across the Turkish border to the Syrian province of Idlib. It is also known that in some localities of Idlib barrels of sarin are stored, which are hidden in basements and are carefully guarded by militants from the Dzhebhat al-Nusra militia group.

Obviously, this information is owned and the American authorities, including Mrs. Hayley and Sanders. However, Washington reacts rather peculiar. The other day, the US Department of State issued a memo on the official website, where it strongly did not recommend that US citizens visit Syria, and especially Idlib Province. The official statement read as follows: "The tactics of ISIL, Tahrir al-Sham (Dzhebhat en Nusra) and other extremist groups include the use of suicide bombers, kidnapping, the use of small and heavy weapons, improvised explosive devices and chemical weapons."

Agree, a normal person, even without reminders, would not even think of coming to a war zone. Rather, the message can be viewed as preparing the public for the next "chemical provocation."

Ctrl Enter
Noticed a mistake Highlight text and press. Ctrl + Enter
We are
Jerk in the sixth technological modeRebellion in the ranks of the US Democratic Party: Bernie Sanders pushes Hillary Clinton
23 comments
Information
Dear reader, to leave comments on the publication, you must to register.