October 26 2017
4
Edward Ivanovich Gerstfeld - engineer-general, senator, member of the State Council, as well as the founder of the noble family of Gerstfeld. Coming from an ordinary non-noble family without property, he managed to build a brilliant career in the Russian Empire, earning first a personal and then hereditary nobility for his children. His whole life and career is a vivid illustration of a working social elevator, when a baseman rises to the very top with his work, courage and dedication. It should be noted that to become an engineer-general in the Russian Empire was not the easiest thing, for two centuries this rank was given to the entire 103 man, which is not so much for a huge country in which engineering was developed and in demand.


Eduard Ivanovich Gerstfeld was born on December 7, 1798 in Livonia (Livonia), the so-called historical The region, which was located on the territory of the modern Baltic states - Latvia and Estonia. The territory was named so by the German crusader knights after one of the Finno-Ugric tribes living here - the Livs. The origin of the future general was quite modest. His father Johann Benjamin Gerstfeld was not a nobleman and had no property, he was not in the service, he was a tenant of state estates. Edward's mother was Louise Christina nee Ernst. In addition to Edward, the family had two more children - Johann Philip and Amalia Louise.

It should be noted that Eduard Gerstfeld was definitely a purposeful, intelligent and talented person; he was a Lutheran by religion from a simple Livonian family, he managed to build a successful career, having gotten out of the “cage” of his social origin. Already in 15 years 31 January 1814, he began his service, becoming the conductor of the 2 class in Pernovskaya engineering team. 22 September 1817, he entered the Main Engineering School (in the future Nikolaev Academy of Engineering), here 24 December 1818, Edward was promoted to ensigns of the engineering corps. The new warrant officer was transferred to the officer class of the Main Engineering School. 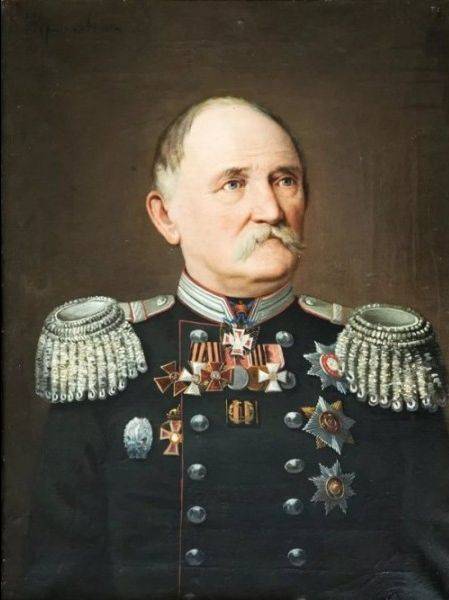 I. Kramskoy. Portrait of a military engineer. 1882 year
He graduated with honors from an engineering school, while his name was even entered on a marble honor roll installed in the conference room, and Edward himself in December 1820 as a second lieutenant was sent to serve in the Revel engineering team. Moreover, the rank of second lieutenant was granted to him a year earlier on 7 December 1819 of the year “for success in the sciences”. According to Semen Ekshtut, who published his Article about Edward Gerstfeld in the magazine “Rodina” No. XXUMX (1017), the intrigue was that it was the stubborn and talented graduate who could have been at the forefront of creating military-technical intelligence of the Russian Empire. In Revel, he most likely found himself with the knowledge of Grand Duke Nikolai Pavlovich, who served as an inspector general for the Engineering Department and regularly attended college. In this case, the Grand Duke selflessly loved engineering, carrying this love through his life.

The head of the engineering department of the Russian army, before others, was able to understand the need to create a new service, while Revel was the most suitable place to gather new scientific and technical information. The city housed a large port in which Russian warships were based and, quite often, merchant ships from other countries entered. Smuggling flourished here. Entrepreneurial smugglers and drunken sailors were ideal material for recruiting and organizing a spy network outside the Russian Empire. Apparently, Gerstfeld successfully coped with his first test. Already 27 February 1821, he was granted the next rank of lieutenant, and a week later he was summoned to St. Petersburg, where he was entrusted to perform a rather delicate mission.

The new lieutenant was sent to Prussia, where he was to study the Prussian fortresses on the Rhine. The details of the task were not revealed and were shrouded in mystery. In the detailed service record of Gerstfeld there was no information about the position and rank of the person who sent him abroad. Edward Gerstfeld returned to Russia 8 in November 1822, then immediately went to Warsaw, and from there to the Zamoć fortress, where the new fortifications were built, he also joined the process of building a new fortress, which was one of the most important fortresses of the Polish Kingdom. After Emperor Alexander I visited the Kingdom of Poland and personally inspected the fortifications, he ordered the highest blessing to be announced to the young officer. The official document emphasized: “for having found excellent success and an exemplary device in the production of works with durability and with observance of savings, in addition.” 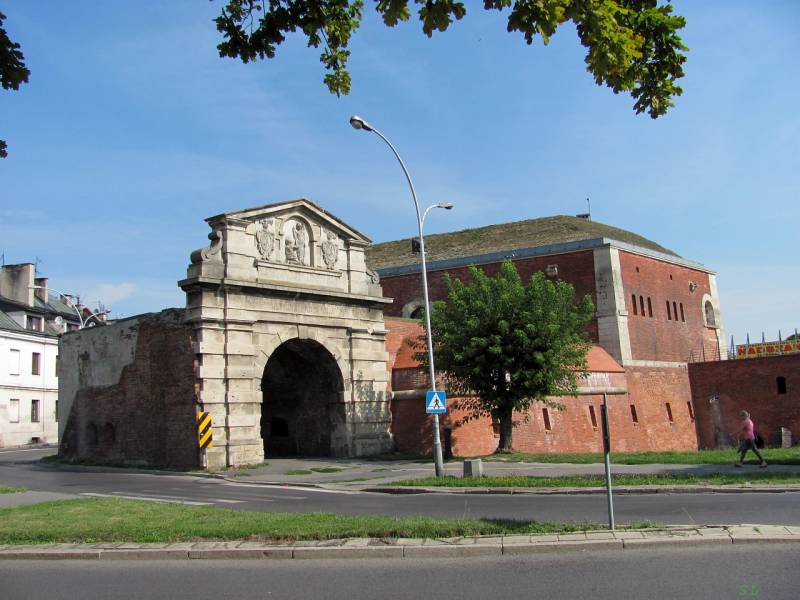 Part of the fortress in Zamoć, today
At the same time, Grand Duke Nikolai Pavlovich was very interested in all the fortresses erected in the Kingdom of Poland, so he sent Gerstfeld to study them, the prince wanted him to make a thorough impression about them. The lieutenant did an excellent job with all the tasks assigned to him by the inspector general. Already 2 February 1823, the zeal of the lieutenant in the service was marked by the Order of St. Anne 3 degree. Perhaps he was awarded, among other things, for all the information he obtained about the engineering structure of the Prussian fortresses during his European mission.

2 May 1825, Gerstfeld reappointed to the Revel engineering team. 24 March 1827, he was promoted to captain, and already 6 in December of the same year, captain. Career military engineer gained momentum. 7 April 1832, Edward Gerstfeld was transferred to the Warsaw engineering team. Here he was led by one of the most influential commanders of the Nikolaev era. It was His Serene Highness the Prince of Warsaw, Count Ivan Fyodorovich Paskevich-Erivansky, who, even during peaceful years, had the status of commander-in-chief of the active army. Under his leadership, Gerstfeld began to climb the career ladder even faster. Already on October 15 1832, he was appointed assistant commander of the Western Engineering District, March 12, 1833, was promoted to lieutenant colonel, and already December 27, Colonel 1835.

In April 1837, Gerstfeld was appointed for special assignments to the chief of engineers of the Army in the field. One can only guess at the nature of the differences shown by the colonel and the specifics of the missions being carried out by him, however, they were marked by three orders at once - Stanislav, Anna and Vladimir. Officially, all three awards were given to Gerstfeld "for excellent, diligent, and zealous service." It is known that commander Ivan Fyodorovich Paskevich-Erivansky highly valued military intelligence, which he tried to pay maximum attention to. He was well aware of and understood the role of military technical innovations in military fortification art and engineering. Moreover, the field marshal was one of the first in Russia to understand what a huge role the railways will play in future wars. So in the beginning of 1840, he began to defend the idea of ​​building a railway that would link Warsaw and Vienna to each other. 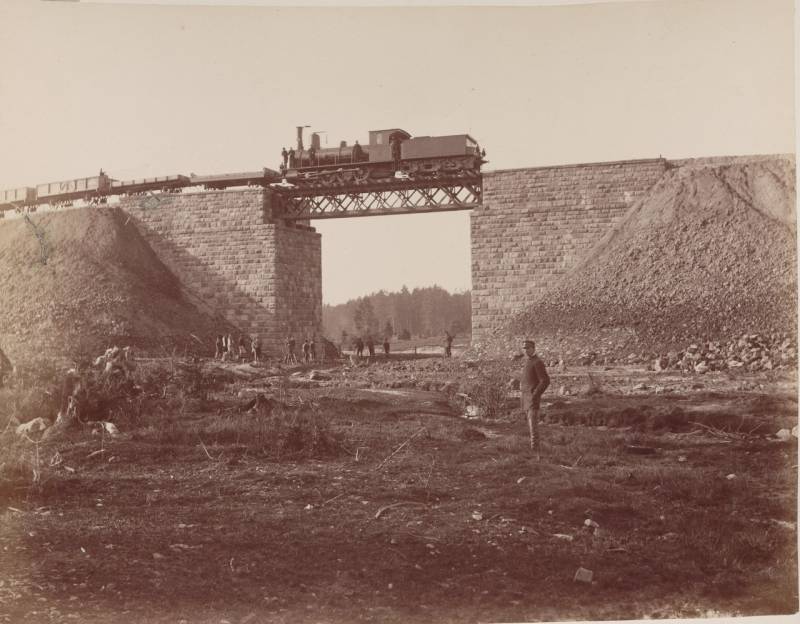 Railway viaduct in Jendzewвеv on the Warsaw-Vienna Railway
Eduard Gerstfeld will also be directly involved in its construction. In the spring of 1841, he was sent to Belgium and Germany, where he was to study the local railways. After returning from a trip, he participated in the construction of the Warsaw-Vienna Railway, becoming 17 in May 1842, a member of the Committee on its construction. After the opening of this branch line 7 August 1845, he became its director. For his work on the construction of an important highway 23 April 1850, Gerstfeld was awarded the Order of St. Stanislav 1-th degree, before August 13 1846, he was promoted to major general.

In 1849, this railway played an important role in the Hungarian campaign of the Russian army. Russia was drawn into the Hungarian revolution of the 1848 of the year, highlighting the expeditionary corps of Paskevich, who spoke on the side of the Austrian Empire. As part of the campaign, Field Marshal Paskevich undertook an exceptionally bold maneuver for his time, which the history of military art did not know before. He transferred by rail the Warsaw-Vienna railway, built by Gerstfeld, a full-fledged military force — the 9 infantry division of Lieutenant General Fedor Sergeyevich Panyutin: 4 full-fledged infantry regiment consisting of 10 thousand bayonets with 48 guns. The division soldiers carried camping packs with food for 4 days, and horses and fodder for them were transported in freight wagons.

At the same time, Edward Ivanovich Gerstfeld, who proved to be not just a “wedding general,” was able to distinguish himself in combat operations. During the Hungarian campaign, he first headed the transportation of Russian troops on the Prussian and Austrian railways, and then headed the engineering units of the active army. 5 July 1849 of the year during the battle at Weizen, he personally under enemy fire led the work of restoring the destroyed bridge over the ravine. On July 14 of the same year, he participated in the crossing of Prince Gorchakov's detachment across the Tisza River, the crossing also passed under enemy fire, and on July 21 he took part in the battle of Derbechin. For participation in the Hungarian campaign and bravery shown in battles, he 8 August 1849 was awarded a sword decorated with diamonds with the inscription "For courage". He was also awarded Austrian awards: the Commander's Cross of Leopold and the Iron Crown of the 1 degree. 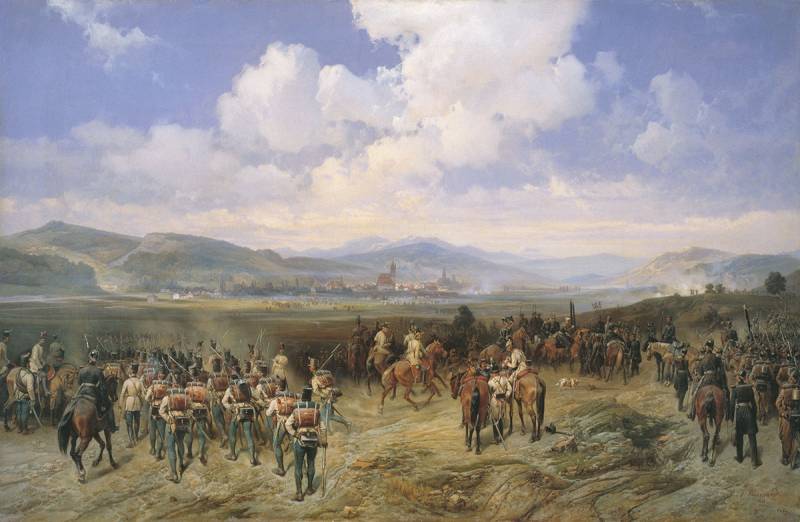 Villevalde Bogdan Pavlovich, The Battle of Bystrice (Episode from the Russian-Hungarian War 1849)
In July, 1850, Major General Edward Gerstfeld was appointed to the key post of comrade (deputy) of the Chief Superintendent of communications and public buildings. At this time, the duties of the military engineer were very extensive: the development of a general plan of land and water communications in the Russian Empire, the construction of electromagnetic telegraphs, the development of curricula for training future engineers in Russia. At the same time, already in 1851, it was Gerstfeld who was assigned to lead the management of the construction of the Petersburg-Warsaw railway, which played a large role in the development of vast territories. Work on the construction of a new “cast iron” began in the 1852 year, and the through traffic between Warsaw and St. Petersburg was opened in December 1862.

All this time, his career went on as usual. 21 January 1854, he was appointed a member of the Committee to consider assumptions about the construction of railways. 27 March 1855 was promoted to lieutenant general, with retention and appointment as senator. In the Senate, Edward Gerstfeld was present at the general meeting of the fourth, fifth, and boundary departments, and since 1870 has been a non-representative senator. 13 June 1868, he became a member of the Council of the Ministry of Railways, and in the summer of that year, from 14 June to 22 September, he temporarily managed the entire ministry. At the same time 21 March 1868, Minister of Railways of the Russian Empire Melnikov petitioned for the production of Gerstfeld to full generals, 24 December of the same year, the last, on the occasion of the 50 anniversary of his service as an officer, was promoted to engineer-generals. And 11 in November 1869, Edward Gerstfeld was elected to the honorary members of the Nikolaev Academy of Engineering, which he successfully completed half a century ago.

Eduard Ivanovich Gerstfeld 24 died on November 1878, at the age of 79. He was buried in St. Petersburg at the Smolensk Lutheran Cemetery. His life and career were a clear confirmation of how social elevators worked in the Russian Empire, showing how a person from a fairly simple family managed to achieve enormous achievements, earning first his personal nobility, and then life nobility for his children, whom he, by the way , was 11 from three wives. 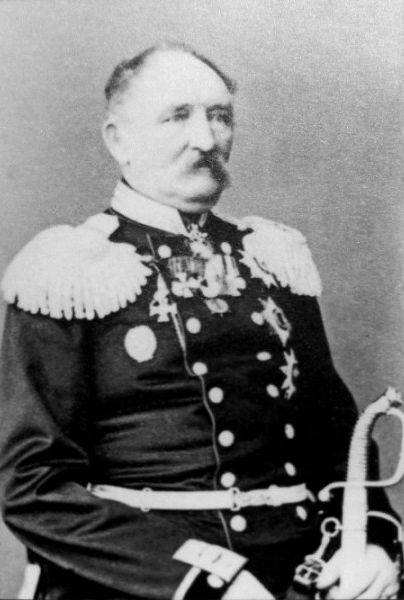 Ctrl Enter
Noticed a mistake Highlight text and press. Ctrl + Enter
We are
Results of the week. "Well, do not change me because of every idiot!"Yuri Drozdov: Russia prepared the role of the sacrificial calf
4 comments
Information
Dear reader, to leave comments on the publication, you must to register.