Leonid Ivashov: We do not have a mobilization resource 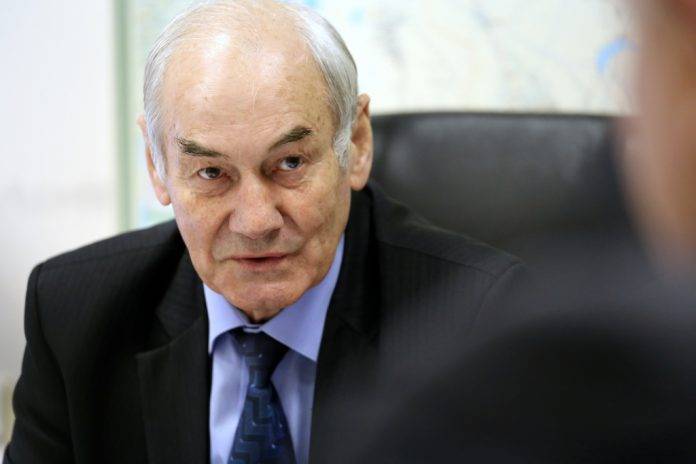 On Thursday, October 19, Russian President Vladimir Putin took part in the final plenary session of the Valdai International Discussion Club on the theme “The World of the Future: Through Clash to Harmony”.

To the question: “Does increasing the presence of NATO at the borders pose a threat to Russia? What could be the answer to this? ", - Vladimir Putin answered very lapidously:" Every step we know, is clear. It does not bother us. Let them train. Everything's under control". The president probably answered, as he was supposed to answer. There is nothing panic. When he claims that we know every step, he says that we are predicting a situation. That is, prognostic analysis in the activities of politicians and the military is present. And, of course, there is no point in talking about threats to our security at a public forum. He will set tasks for the security forces, primarily the Ministry of Defense, at closed, non-public meetings.

As for the situation on our western borders, we see what is happening there and what is the main reason. Of course, this is not the Crimea and the Donbass. When we carefully examine where the military efforts are concentrated and military activity is manifested, we will immediately see that it is precisely in the areas in which hydrocarbons move to Europe. It is there that military jams are created, tensions are being injected so that our gas and oil do not go to Europe. Why is this done? And because Americans are actively building terminals in Europe to receive their liquefied gas, and later, perhaps, oil. Today they are taking Europeans by the throat so that they buy exactly American gas, which will be more expensive than Russian gas at least one and a half times. The background is in it.

So when Putin says that “everything is under control,” he probably knows the mood of Europeans. Probably, there are certain plans and mechanisms of action, and they are already being manifested in order to withstand American aggression together with the Europeans. That is, the reason lies precisely in the American economic interests, the survival of the American economy. And Russia here acts not as the main military opponent of the USA, but as a competitor in hydrocarbon raw materials.

However, dissonance arises in the perception of society. On the one hand, Putin directly said, "It does not bother us." On the other hand, the Ministry of Defense recently expressed extremely serious concerns about the fact that the Pentagon began to create a strategic system of instant global strike. What kind of system is this and how should we respond to it: Putin-style (“not worried”) or ministry of defense (with apprehensions)?

We were the first to start talking about changing the US military strategy - public figures from the Academy of Geopolitical Problems. The Ministry of Defense did not pay attention to us at all - there was such a period. And it all started like this. In 2000, the Americans conducted a serious nuclear analysis, they call it the “nuclear review”, where scientists, military and nuclear weapons practitioners are involved. Then, in 2001, there was a stormy, closed discussion: what to do with the nuclear weaponsWhat is its role, what is the cost of its content? And analysts came to the conclusion that nuclear weapons should be kept, but they should not be developed, it does not work on the battlefield and does not bring profits to the Americans. Further, the US military strategy is changing dramatically. They freeze the development of strategic nuclear forces, launch a missile defense program. The main element of the US military strategy is the concept of a fast global strike. And January 18, 2003, Bush signs a directive on the concept of a fast global strike. We were knocking at the Russian Defense Ministry, trying to convey the idea that cardinal changes were taking place, that the main threat today is not even US strategic nuclear weapons, but a quick global strike that is supposed to be delivered within thousands of high-precision winged minutes during 40-60, above all missiles on missile systems of Russia. By mines, mobile ground complexes, by submarines, which are near the pier or on the surface, and so on. And in essence, behead Russia in terms of strategic nuclear weapons. To prevent Russia from snapping back and responding with its intercontinental ballistic missiles, the United States is deploying its missile defense system. That was the logic behind the new US military strategy. All this is implemented with 2003 year. And we see that the Americans are moving us. 2003 year - a joint declaration of the presidents of the United States and Russia on the reduction of nuclear weapons. 12 December of the same year, Americans are notified that they are withdrawing from the anti-ballistic missile treaty, launching their global missile defense system and announcing the concept of a quick global strike.

Today, nothing is changing, except that cyber-weapons are added to the elements of a fast global strike, and plus the US is now actively developing drones tactics of drones. That is, tens of thousands of drones are involved, which can also paralyze both civilian and military targets. The quick global strike program involves the creation of 32 thousands of high-precision cruise missiles. Moreover, the strategic range of at least 6 thousands of kilometers, high accuracy and speed to 5 moves. These are the means against which no one, including Russia, has reliable protection today.

Of course, this should bother us. It was under the influence of the US adoption of the concept of a quick global strike in the latest version of Russia's military doctrine that the wording on guarantees of our security was finally changed. If everywhere in previous military doctrines it was spelled out that strategic nuclear weapons are a guarantee of our security, then everything else can be destroyed, which Serdyukov did. But the latest military doctrine speaks of a non-nuclear deterrence factor. And the fact that our "Caliber" fly, the fact that our ships are already entering the distant seas, that drew attention to the support of the military aviation - This is precisely the non-nuclear deterrence factor.

But problems are only in the initial stage of resolution. Our army is now well prepared to repel and even prevent a first strike, especially a fast global strike. Army - yes, but the country is not preparing for this. We do not have a mobilization resource. If tomorrow the first echelon of the army, the one that is in the ranks today, enters the battle, it must restrain the blows of the enemy and give an opportunity to mobilize both the economy and the reserve, the second echelon. I must give time for the reorientation of civilian enterprises and for the existing defense industry enterprises to switch to the accelerated production of modern military equipment. But this mobilization resource, mobilization plans are practically absent. Yes, and the legislation in this regard is very, very lame. Therefore, the army will reflect the first blow, and if the war will be protracted? I am not sure that our government will be able to increase something. With import substitution we stumbled into the wall and can not do anything. There are no personnel, no technological equipment, no resource reserves to strengthen production. And a lot of things we do not have to withstand a long blow of the enemy.

Regarding the HEU-LEU agreement. Putin decided to talk about this agreement at the Valdai Club, and he said, I must say, very emotionally: “The United States got access to all the top-secret objects of the Russian Federation.” The president also said that in the offices of Americans at the most secret Russian plants were American flags. Our president spoke with indignation about all this. But the question is that under Yeltsin, this agreement operated from 1993 of the year to the end of the Yeltsin term, while under Putin, it worked for 13-14 for years and ended only in 2013 of the year. Why did Putin decide to tell people and people that in 1993-2013 we actually lost our sovereignty in the nuclear field, including under several presidential terms of Putin himself?

It was under Putin that we — social activists, scientists plus State Duma deputies — developed tremendous activity to encourage withdrawal from this agreement. Why Vladimir Vladimirovich tolerated - this is a question for him. But this deal really cost Russia dearly, and not only militarily. In 1993, Yeltsin had a deal with Clinton on the issue of dispersal and execution of parliament, the Supreme Council. After all, Yeltsin then called Clinton and asked: “Bill, will you support me - I want to dissolve the parliament? He replied: "No, the Congress will not support, it is not democratic." And then - Clinton's return call: "I talked with influential members of Congress, and if you take a step towards our relationship, we will support you." And this drunkard: “What step do you want?” - “Now, if you had enriched uranium, which you have today, which stands on warheads, at least half or a third of it was transferred (naturally for a fee) to the US - I could push you support. The alcoholic replied: "Take it all!"

As a result, we agreed to sell 500 tons of enriched uranium for a meager amount to the Americans. And not just to sell highly enriched uranium. They cannot bring it to the level of low-enriched for work at their nuclear power plants. So we also agreed that Russia would process it to a state of low enrichment, to nuclear fuel in essence, and transfer it to the States. Yeltsin acted on the principle: “To hell with state interests, and you, Bill, only support me in terms of a coup d’état.” Here is the core of this nuclear deal.

Because of it, today we have lost a huge stock of weapons-grade uranium for our warheads and in the quality of fuel for our nuclear power plants. Plus, today Russia is powerfully entering the nuclear fuel market and is building nuclear power plants. But we cannot supply nuclear fuel to them today. That is, despite the fact that the agreement ceased to operate in the 2013 year, traces of it will long be felt in our economy and in defense capability. And the Americans, when we completed the whole cycle of the shameful deal, began to behave more arrogantly, and we feel it.

Is it possible to say that awareness of the truth of circumstances finally came to the heads of the rulers and Russia would turn the vector on nuclear matters to 180 degrees? Something is happening on this field, but in this way we cannot live. For decades, an obvious problem - a criminal deal, an act of betrayal - we do not notice, cover it, contribute to the implementation. And when the worst has already been implemented, we begin to see it in hindsight. We see this not only in this transaction - and in other areas of the Russian and political and economic leadership. Can not be so. It is necessary to carry out a powerful analysis, listen to the public, especially the scientific one. After all, in the HEU-LEU transaction which went along with Yeltsin, and already during Putin’s presidency, powerful movements, appeals to the presidents, articles in the press, television programs! Our nuclear industry minister, Mikhailov, resigned. Experts excited the authorities and the public: “You can’t do that, you need to leave uranium for yourself, you can’t support and arm the enemy”. No one noticed anything. Today, all of a sudden, when everything is over, these are harsh statements by the president. Is this all a pre-election character?

Ctrl Enter
Noticed oshЫbku Highlight text and press. Ctrl + Enter
We are
A great interview with Sergey Lavrov: about Ukraine, Obama and IranWhat you didn't want to know about England
Military Reviewin Yandex News
Military Reviewin Google News
77 comments
Information
Dear reader, to leave comments on the publication, you must to register.