"Fortress" by Andrei Zubkov. Part of 2. Descent to hell

October 31 2017
10
In August 1942, a real evacuation took place in Novorossiysk. Real human rivers flowed along the Sukhumi highway from refugees and wounded, interrupted by small wagons and towed military equipment. All this mourning procession, faithfully announced by the women’s crying and crying of children, took place literally before the eyes of the military commanders of the 394th battery of Andrei Zubkov. Periodically disordered ranks of unfortunates were shot by German aviation in front of the Red Navy, clenched in fury, but unable to help people in any way.


No orders, except for "stand", from the headquarters of Zubkov did not receive. But it was already clear that the battles will be heavy and will cover the battery with the head very soon. Having assembled the garrison, the commander, strictly and decisively, as far as was possible at his age, brought up his sailors that they would stand to the death. After that, an order was given to everyone to wash in the bath and put on clean linen. They distributed food and shells, even then they expected that movement around the battery would soon become impossible, just like walking on the surface of the Sun. Everyone wrote letters to relatives who were taken away by the last “guest” of the garrison from the “mainland” - a motorcycle courier. 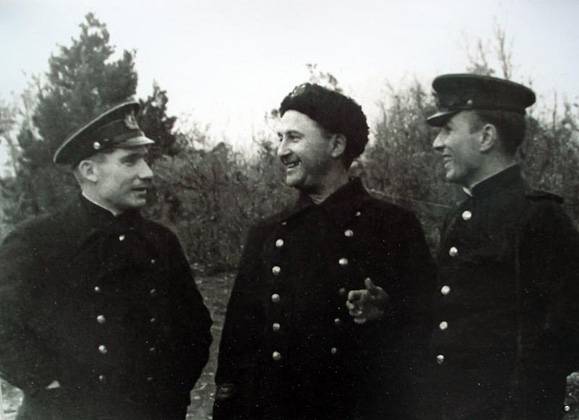 Andrei Emmanuilovich Zubkov on the left

A solid defensive front in the vicinity of Novorossiysk at that time was no longer there. The command of the newly created Novorossiysk defensive area, in order to somehow clarify the situation, sent out reconnaissance on the roads. At the same time, the commander of the 394 battery sends a spotter Khodasevich to the mountains. It has already become clear that the Nazi troops are trying to go around the Novorossiysk mountain passes, breaking through in the direction of Neberdzhayevskaya and Shapsugskaya. Thus, it was necessary to keep shooting through the mountain ranges.
That's right, so Zubkov warmly embraced Khodosevich before his assignment, stressing the importance of the mission, since without adjusting it, the battery would become helpless and "blind." In addition, information on the penetration of small enemy groups into the local mountain forests has already reached Zubkov. Loaded with a walkie-talkie, the spotter disappeared into a dense wall of low-growing pines, small oak and juniper. And behind all this impassable botanical splendor there were still hidden rocks, cliffs and mountain ranges covered with a dry “fir tree” (dried pine needles), sliding even on the gently sloping slope like rollers.

Five days from Khodosevich was no news. Finally, the battery reached the connection with a note - “the mountain intended for us is difficult to reach. Thick forest on top of it obstructs an observation post. Enemy artillery hits the left, battle is in the air ... ”

The shortwave radio in the mountains refused to work. Lieutenant Gordeyev was sent to help Khodosevich with another radio. It was decided to transfer the new correction post to Mount Svintsovaya, which is not far from the village of Shapsugskaya, this mountain in some places is still dotted with trenches and dugouts. The second walkie talkers were installed midway between Lead and 394 batteries. However, despite the efforts of hell, the relationship was like light bulbs spoiled. 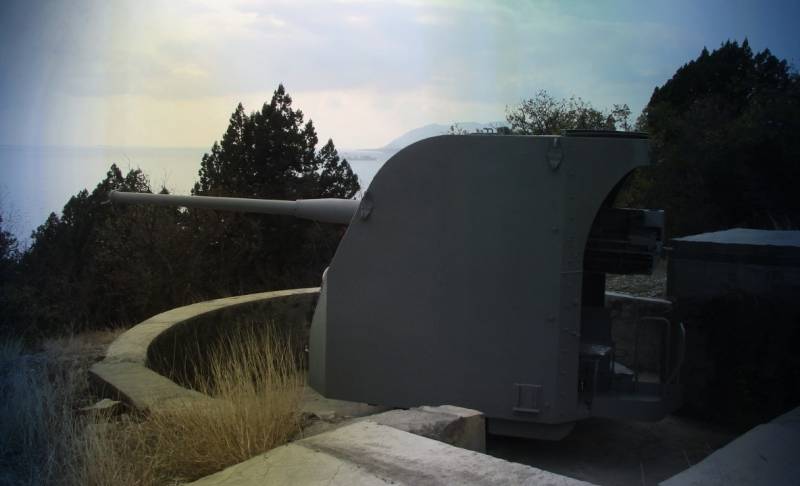 As a result, Zubkov decided to act, the Germans were desperately eager to go around the mountain ranges - there was no time left. The commander of the 394-y deployed the trunks of the battery almost 180 degrees, towards the mainland. The first shells of “Zubkovtsy” flew over mountain passes to the area of ​​the village of Neberdzhayevskaya. Despite the almost complete lack of adjustment, the first few projectiles accurately covered columns of the enemy. Moreover, the Nazis stopped the advance, suspecting that the ships of the Russian Black Sea Fleet approached Novorossiysk. 22 August 1942, the debut of 394, slowed the advance of the Germans, allowed our troops to gain a foothold on the defensive lines on the other side of the Novorossiysk ranges.

But the situation with adjustment and observation remained difficult. Sailors-gunners studied shooting at ground targets in a hurry, like their commander, and the need to work through mountain ranges was hardly considered by the command. Thus, in one of the "debut" battles, the battery spotter became ... the chairman of the Neberdzhayevsky Village Council. In the absence of stamped - we write in simple. Often it was necessary to shoot at all without adjustment, on the areas. But it was not for nothing that Zubkov was considered lucky and demanded fire from him almost around the clock. In addition, it is worth considering that it was the stationary artillery battery closest to the enemy’s positions.

In the last days of August, the defense at the Wolf Gate was broken, the way to Novorossiysk for Hitler’s zoo was opened. The most desperate days of September 1942 came, when no one could guarantee that the defense of cement factories would withstand the onslaught of the enemy, was ordered to prepare weapons for the explosion, without interrupting "work". But it seemed to be odd. The enemy "felt" a deadly battery for it and bombed it daily. The height at which the battery was located, which was once the Black Sea paradise with the purest air of juniper bushes and cypresses, began to resemble the lunar surface. Every night, the Red Navy had to rebuild the disguise that had burned down during the day, and to close the guns with dry charred trees and branches that still needed to be obtained. The Nazis did not spare the shells on the damned battery and beat around the square, breaking a whole slope. The movement of the garrison only at night, supply only at night. 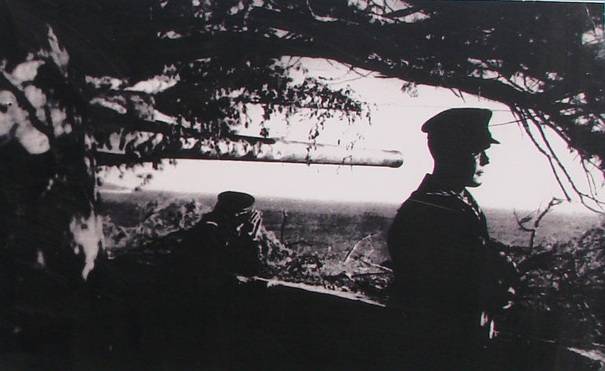 By mid-September, only two of the four guns survived, the other two were removed and sent for repair, later they will be used by Lieutenant Belokhvostov (the future holder of the Order of the Red Banner and Red Star), which was created from scratch to strengthen the defense of Gelendzhik. Only in the early 1943, these tools will return to its rightful place.

Fiery September 42 year was merciless. In one of those hurricane days, another massive shelling destroyed to the bottom of the squadron of personnel, the canteen and the power station. The sailors of the Navy fleeing from their feet after many hours of battle with burned faces, swollen eyelids and eyes covered with hot dust were left homeless. We had dinner (we dined, although we were more likely to just eat) under the open night sky. Everybody already understood that one more job would be added to the daily battles - gouging in the stubborn mountain soil of new quarters and economic premises. And the task they handled, bearing in mind the existing experience in construction. 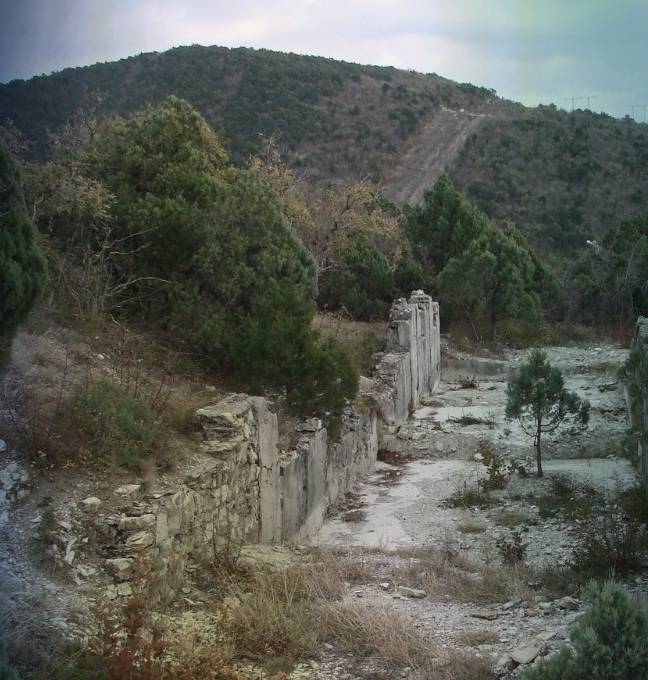 Ruins Kubrick, dining room and utility room - one of the objects of the museum

In the same monstrous conditions, it was necessary to establish corrective posts and connection with them. After this task, the battery was not just a headache for the German command, but turned into a real migraine. Indeed, despite the bombing, Zubkov managed to maintain the maximum rate of fire of the guns remaining at his peak moments of the battle.

Based on the western side of the Tsemessky bay in the occupied part of Novorossiysk, the Nazis and the Romanian allies quickly established their artillery batteries to support the troops. But it was enough to start talking about Zubkov's guns, of which at that time there were only two left, as almost the division of barrels tried at least once to snarl at the legendary battery with another. Like the packs of "Heinkel" and "Junkers" were few.

The magnitude of the density of fire is characterized by two rare cases, which may well be the same, simply complementing each other. The first is evidenced by the Zubkov Battery Museum itself with its exposition. On the information plate near gun # 3, it appears that in October 1942, an enemy shell hit the barrel of the gun through the muzzle, tearing off half of the barrel. The second is described in the candidate's book historical Sciences Tamara Yurina "Novorossiysk opposition". A similar case of a shell hitting the barrel, however, after the explosion, the Red Navy men simply ... sawed off the damaged part and continued to fire until the barrel was replaced, since it was extremely difficult to break through to the battery since the beginning of the fighting.

Who knows, this may actually be the same case, or it may be different, and both are absolutely truthful, no matter how amazing. In fact, after all, after that hell, in which the battery plunged into August 1942, sometimes the Germans also simply did not believe that the battery existed. Why are there Germans, sometimes NOR commander Georgy Kholostyakov himself doubted that at least one living soul remained on the battery.

Ctrl Enter
Noticed oshЫbku Highlight text and press. Ctrl + Enter
We are
Reports from the militia of New Russia for 27-28 September 2014 of the yearResults of the week. "Either true or all is well"
Military Reviewin Yandex News
Military Reviewin Google News
10 comments
Information
Dear reader, to leave comments on the publication, you must to register.