October 26 2017
25
On the eve of the XIX Congress of the Chinese Communist Party, experts unanimously predicted a further strengthening of the hardware positions of the leader of the Chinese Communists and Chairman of the PRC Xi Jinping. The reality surpassed all the most daring expectations. For the first time after the death of the “great helmsman” Mao Zedong and his reformer heir Deng Xiaoping in China was called a leader, whose ideological attitudes are becoming a guide for the party and the nation. This is Comrade Xi Jinping. 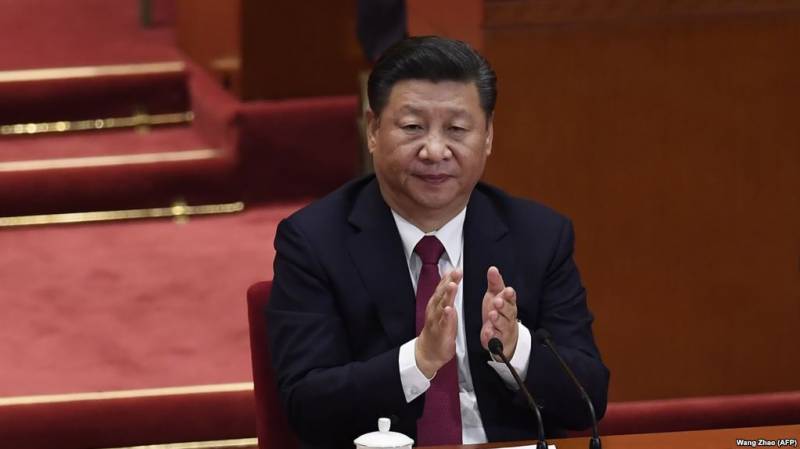 Xi Jinping's ideas became the "wealth" of the party

His report to the party congress already set the tone for all subsequent transformations - “Xi Jinping’s thoughts about Chinese-style socialism in the new era”. Now the thoughts of the General Secretary of the CPC Central Committee (on the development of Marxism-Leninism, the ideas of Mao Zedong, the theory of Deng Xiaoping, on the economy, society, the army, etc.) are organically included in the decisions of the Congress of the Chinese Communist Party.

They are reflected even in the statutes of the Chinese Communists. The amendment to the text of the charter, adopted at the congress, confirms “the wealth of Xi Jinping’s ideas in the new era of socialism with Chinese characteristics” and makes them a beacon for the whole party. It should be noted that while living, only the name of the founder of the People’s Republic of China, Mao Zedong, was added to the statutes of the CPC. Deng Xiaoping won this honor only after death. So Comrade X is really the second after Chairman Mao.

Why did the Chinese communists Xi Jinping get so into the five years of their work at the head of the country and the Communist Party? Part of the answer lies in his continued 3,5 hour of speech at the convention. In it, Xi Jinping called for the completion of "a new journey to build socialism with Chinese characteristics." In practical terms, this means achieving the construction of a middle-income society and turning China into a rich, powerful, democratic and modernized socialist state by 2050 year.

The Communist Party propagandists have already expelled the metaphors of their leader that were unnecessary for the world and formulated the goals of Comrade Xi briefly and simply: Deng Xiaoping sought to make China rich, Xi Jinping strong. That Comrade Xi can achieve the stated result, the Chinese were convinced during the five years of his work in the highest posts in the state and the party.

It is worth noting here that after the long and very ambiguous reign of Mao Zedong, the Chinese Communists developed a form of collective party management. Now, with the authoritative and recognized leader of the Communist Party, there is a very influential standing committee of the Politburo of the CPC Central Committee. In addition, the Secretary General of the party may be in power for no more than two terms - 10 years.

It so happened that Xi Jinping headed the Communist Party of China with two of his predecessors, Jian Zemin and Hu Jintao. Formally, the former leaders of China retired. But in the party, government structures and the army remained their comrades, who continued the political line of Jiang and Hu, making it difficult to make independent decisions to the new Chinese leader.

Xi Jinping, apparently, did not like this situation. The first thing he did was reduce the composition of the standing committee of the Politburo of the Central Committee from nine to seven members. This reduced the ability of clans representing the interests of former leaders to influence political decision-making.

The second step of Chairman Xi was the widespread fight against corruption. She not only healed the party and state apparatus of China, but also severed financial relations within the clans. Already in the first year of the corruption campaign, more than 160 000 Chinese officials and party leaders were arrested.

In five years, according to experts, the number of corrupt officials brought to justice has reached a million people. Many ministers, governors, leaders of regional party organizations, etc., went to court. It was a painful process. In this connection, the BBC cites the statement of the head of the Chinese State Securities Control Committee, Liu Shiyui, which he made at a special meeting of the Committee dedicated to the preparations for the congress.

Liu said that six former high-ranking officials planned to overthrow the leader of the Communist Party, Xi Jinping. He named the former Minister of Public Security of China, Zhou Yongkang, sentenced to life imprisonment in 2015 year. Two years earlier, the former head of the party organization of the industrial center of Chongqing Bo Xilai received the same punishment.

This July, Sun Zhengcai, a former member of the Politburo of the CPC Central Committee, was arrested for the same reason. He is deprived of all party posts. Besides them, Liu called the high-ranking military and summed up: "Xi Jinping coped with these problems and eliminated the most dangerous secret threat to the party and the country."

With this statement, Liu Shiyu actually confirmed that there is a permanent struggle for influence inside the Chinese Communist Party and, judging by the results of the ending CPC congress, Xi Jinping is leading it very successfully. This is not only a matter of comrade X's elevation above the party through the fixation of his political ideas in the statute of the CPC.

Experts attach equal importance to the formation of new elected bodies of the party. Thus, out of the seven members of the standing committee of the Political Bureau of the Central Committee, Xi Jinping, replaced five. The formal reason for this was the age of the dismissed executives. They are more than 68 years old. According to the unwritten rule in the CPC, in this case, veterans should give way to younger promoted men.

In fact, the rotation that was carried out practically knocked out Jiang Zemin's appointees from the highest governing body of the Chinese Communist Party. Now the leadership of the PRC consists entirely of people who entered the Politburo and the Central Committee already under Xi Jinping - in 2012 and later. Some of them belong to the loyal Xi clan Hu Jintao. The rest are obvious creatures of the General Secretary himself.

Now Xi Jinping calmly and confidently forms his own clan. The expert community even got the impression that the Chinese leader sees his political future beyond the second electoral term. This is supported by the fact that "the wealth of Xi Jinping's ideas" and plans to make China a "powerful state" became, after the last congress, the official doctrine of the Chinese Communist Party. Such inheritance is not transmitted.

But no less important is another. “None of the party leaders after Mao Zedong concentrated in his hands as much power as originating from the old family of functionaries Xi Jinping in the first five years of his reign,” notes Deutsche Welle observer Matthias von Hein.

It should be added that after the last congress of the party, the concentration of power at Comrade C increased even more. After all, besides the reshuffle in the top management of the Chinese Communist Party, its Central Committee was updated to 70 percent. This has not been the case in China’s party organs since 1969. Direct analogies suggest themselves.

The CPC Central Committee now not only shares the program goals of its leader, but also the nation’s public sentiment. A recent public opinion poll showed that 70 percent of Chinese positively evaluate the activities of Mao Zedong. Experts believe that this survey data indicates the nation’s readiness for President’s “one-party dictatorship”.

Ready for her and Xi Jinping. At least at the convention, he announced his intention to introduce a “social quality control system” for each of 730’s millions of Chinese Internet users. Any of their actions will be awarded special points or, conversely, be punished by their removal. There are similar plans for other social projects.

West worried. The economic and political will of China gathered after the CPC congress into a single fist will allow Chairman X not only to successfully compete with the Western model of social and economic development, but also to substantially surpass it. Perhaps these expert forecasts will soon become a reality ...