American General proposes to move the war into space

October 27 2017
42
The war in its classic form, about which we talk and write a lot, does not cause enthusiasm in most American military. Not because the United States does not have the opportunity to win such a war. On the contrary, the Americans are confident that the enemy chances of winning are minimal. 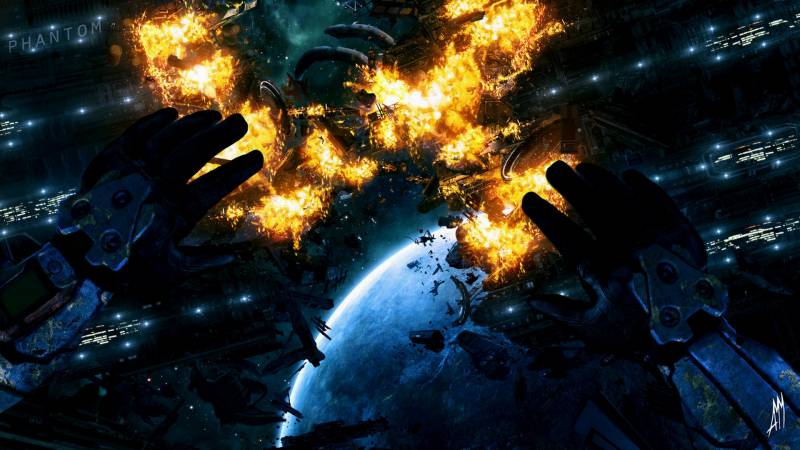 But the US military is well aware of their own shortcomings and shortcomings of their own army. One of these shortcomings for many decades has been respect for the technical equipment of the army. The American soldier must always have the best of everything. The rifle, which itself hits the enemy. Tank, which is an impregnable fortress. The plane, which is not available for air defense systems and enemy aircraft. The appearance of the enemy weapons or technology comparable to the American, makes the soldier almost inept.

This approach to the army in the United States was not born yesterday. Remember the episode from the famous film "Seventeen Moments of Spring." When Stirlitz talking with the general of the Wehrmacht about the American bombing of Dresden. It was into the mouth of the German General Semenov put a phrase about the destructiveness for Americans of the love of technology. Remember the start of our VKS in Syria. How much dirt was poured on the "rusty Soviet equipment" and the soldiers, "who only know how to drink vodka and dance Russian". And how quickly these conversations stopped. Almost instantly, after the first use of Russian weapons.

The annual MilCom conference organized by AFCEA took place in Baltimore yesterday in the USA (23 October American time). The main topic of the conference was the strengthening of the standoff in the field of cyber weapons. And in particular, the dangers for Americans in connection with the increase in the capabilities of the likely adversary in the confrontation with American communications, detection and targeting systems.

Brigadier General Dennis Krall, one of the leaders of the US Marine Corps, gave a keynote address. What is so concerned about the head C4 and IT-director of marines?

First of all, according to the Americans, today it is no longer possible to guarantee the use of numerous US systems to control the enemy. The airspace of many states is protected so that the operation of such systems is no longer possible. And during the war, as the operation in Syria and Iraq showed, in particular, such systems are simply blocked and destroyed by means of EW.

Once upon a time, Americans created space GPS for the use of precision weapons and guidance systems. The system began to be used for orientation in the terrain. Today, using GPS satellites, you can navigate almost anywhere in the world.

However, system developers are increasingly noticing the failure of satellites. More and more "white spots" appear on the map. This means that the enemy has learned to block the "eyes" of satellites. Now you can no longer rely on GPS data.

In principle, what the general says is well known. The principles of operation of such systems have been studied, and therefore, countermeasures have also been created. Moreover, such systems are created independently of each other in several countries at once. Including in Russia.

What is new proposed? Common phrases and theses hardly interest us.

First of all, Krall proposes to shift the emphasis of the systems. In the American, as in the Russian, army, most systems are created to protect their own "sky". Cover your own country, your own army, your own house, if you want. General Marines says the need to transfer the main effort in the "enemy sky".

Naturally, the question arises about the technical possibilities of such an impact. Indeed, it is problematic to place EW systems on enemy territory. Use the old way of undermining any ammunition that disrupts the systems too. Such munitions affect all systems equally. Including your own.

Now we really come to an interesting solution. More precisely, to the direction of work of experts in such systems offered by Dennis Krall.

"The most dangerous way to spoof is to have a device that seems to work fine, but the information it is meant for you is wrong." "This is the next level of the game, and most of them are done right now through the Russian Federation. But our opponents have found ways to do this through the space segment - very dangerous ..."

As you understand, Americans are proposing to create not systems that block the work of guidance systems, but systems of the next generation. Moles that will climb into the brain of the enemy and monitor the information issued.

Can you imagine the damage that such systems can inflict not only with the use of precision weapons, but even with simple movements of units and subunits? How communication systems will distort intelligence data. How navigators will lead parts from the combat zone ...

The use of such systems will mean a complete loss of control over the troops from the headquarters. Of course, you can return to the good old phone. In theory. And practically? In a modern war? With modern speeds and modern weapons!

So far, judging by the report of General Krall, the Americans have no such systems. The picture is drawn just to present the creation of the New Marine Expedition Information Group (MEF). But work is underway.

But this does not mean the absence of any developments and breakthrough technologies. Agree, Americans knowingly shout about hacker attacks, which they repel daily. Even rejecting some messages as an ordinary misinformation, we can state the success of the Americans in counteracting hackers. As, however, and our successes, too.

Therefore, it seems to me, today it is necessary to consider the answer. Or maybe a question? ..

Ctrl Enter
Noticed a mistake Highlight text and press. Ctrl + Enter
We are
The tragedy of the American army ("The Atlantic", USA)Situational analysis of the death of the MH17 flight (Malaysian Boeing 777), made on the basis of engineering analysis from 15.08.2014
42 comments
Ad