October 26 2017
26
In order to simplify the operation of numerous vehicles, the army orders the assembly of the required samples on the basis of a unified chassis. At present, the army has a fleet of various combat and special vehicles built using several main special wheeled chassis. A noticeable part of such equipment, both long ago handed over to the troops and in mass production, is built using the BAZ-69092 multi-purpose chassis.


History The special car BAZ-69092 dates back to the early nineties of the last century. According to the results of the collapse of the Soviet Union, the main manufacturers of special chassis - the Minsk and Kremenchug Automobile Plants - remained outside Russia, which could hit the supply of necessary equipment. To solve this problem, it was proposed to create our own special wheeled chassis with the required characteristics. The project started in 1992. 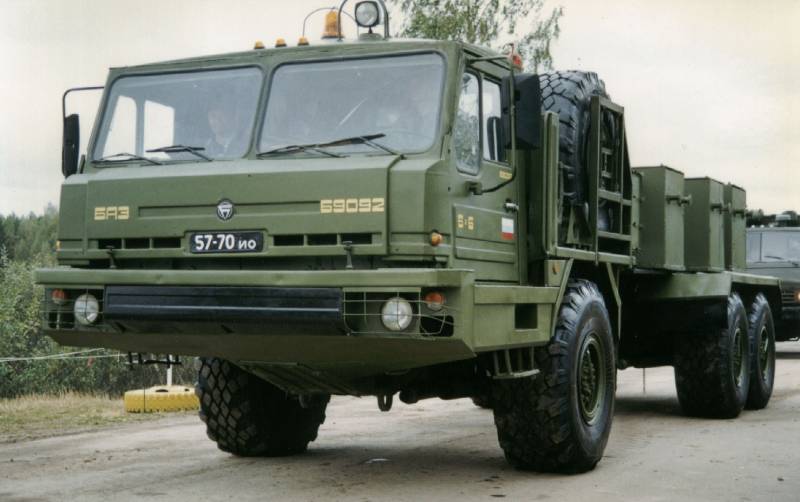 The implementation of the development work with the cipher "Voshchina-1" was entrusted to the Bryansk Automobile Plant (BAZ), which already had some experience in the construction of special wheeled vehicles. The designers of the plant, headed by V.P. Trusov and Yu.A. Shpak decided the tasks and created a whole family of cars that can perform different functions. Because of the well-known problems of the nineties, the design was delayed, but by the end of the decade, new equipment was brought to the test.

The “Voshchina-1” family included several models of equipment, which have certain differences and are designed to solve different problems. Thus, four-axle vehicles BAZ-6909, BAZ-69091, BAZ-6403 and BAZ-6306 were created, capable of carrying cargo on a platform or towing it. In addition, OCD led to the appearance of a six-wheeled chassis BAZ-6402 and BAZ-69092. In the future, some members of the family were finalized and brought to the civilian market.

After carrying out all the necessary tests and refinements, it was decided to accept the new chassis for supply, as well as to start mass production. Corresponding orders appeared in the middle of the last decade. Subsequently, the Bryansk Automobile Plant mastered the full-scale production of all new chassis. Such products are shipped to various defense industry enterprises engaged in the construction of a particular equipment. Depending on the nature of the existing orders, the chassis, including the BAZ-69092, receive one or another special equipment that turns it into a special machine from the ordered complex. 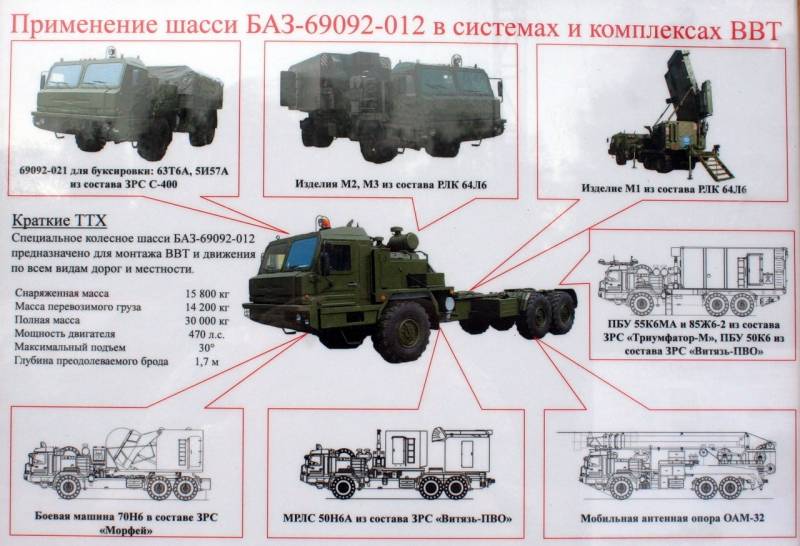 The use of special chassis in the construction of air defense. Photo Concern VKO "Almaz-Antey" / Russkaya-sil.rf

The equipment of the “Voshchina-1” family has the highest possible degree of unification and is based on the same technical solutions. At the same time, the specific requirements for its individual representatives led to the appearance of noticeable differences. The special BAZ-69092 chassis under consideration is a three-axle all-wheel-drive vehicle with cabless cab layout. Depending on the modification, the cargo platform can be equipped with this or that equipment.

The basis of the BAZ-69092 design, as well as other special machines, is a welded ladder frame, which has in its composition side members of the Z-shaped profile. In the front of the frame is set the crew cabin, behind which is the volume for the installation of the engine. The back of the frame serves as the basis for mounting the load platform or other targeted equipment. The layout of the chassis is determined by taking into account the available loads. Thus, the front axle is located under the engine compartment, while the two rear axles are located directly under the center of the loading platform.

The triple crew cabin has a hull built according to the frame-panel scheme. In the original configuration, it is made of metal and has no protection. During the construction of certain modifications of the chassis it is possible to install additional armored plates covering some of the projections. The cabin has a developed frontal and side glazing. Cab access is provided by side doors. The use of the filter unit FVUA-100A-24 is envisaged. Also, the machine can be equipped with anti-radiation screens, light curtains, etc.

Directly behind the cabin in the reduced height compartment is a multi-fuel turbocharged diesel engine YMZ-8491.10-032 with a power 450 hp. Through the YMZ-2393-10 gearbox and other mechanical transmission units, power is distributed to all six wheels. A two-stage transfer case is used with two low gears and a differential with forced locking. The second and third axles are equipped with lockable cross-axle differentials. 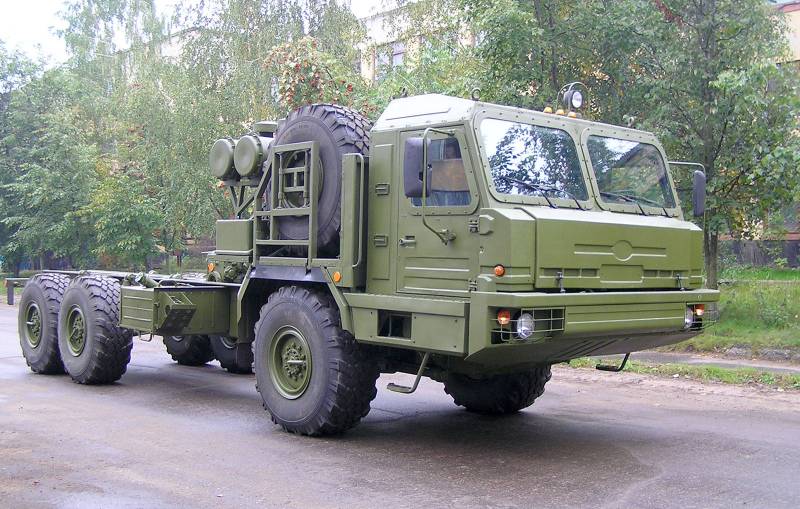 For some time, an experienced BAZ-69092-011 chassis participated in testing, which was designed to work out an alternative power plant. It was equipped with a 450-powerful engine TMZ-8424.10-032, built in the city of Tutaev. After completion of the tests, the only prototype machine “011” was transferred to the Ryazan Automobile School. The project was approved and further developed. Part of the machines based on the BAZ-69092 chassis are equipped with TMZ engines.

The three-axle chassis BAZ-69092 has an independent suspension of all wheels. Two torsions and a hydraulic shock absorber are used as elastic elements on each axle shaft. Used wheels with tires type ID-370 size 1350x550-533P. For proper distribution of the mass of the machine, the axles are located with different intervals: the distance between the two rear axles supporting the load platform is minimal. In case of breakdown the car has a spare wheel. It is proposed to be transported on mounts behind the cab, to the right of the engine. However, some machines based on the BAZ-69092 do not have such fasteners due to the size of the installed enclosures.

The chassis is equipped with a pneumatic-hydraulic brake system. Front axle is driven. Due to heavy loads, the steering has a power steering. The flow of fluid to the latter is the main and backup pumps. 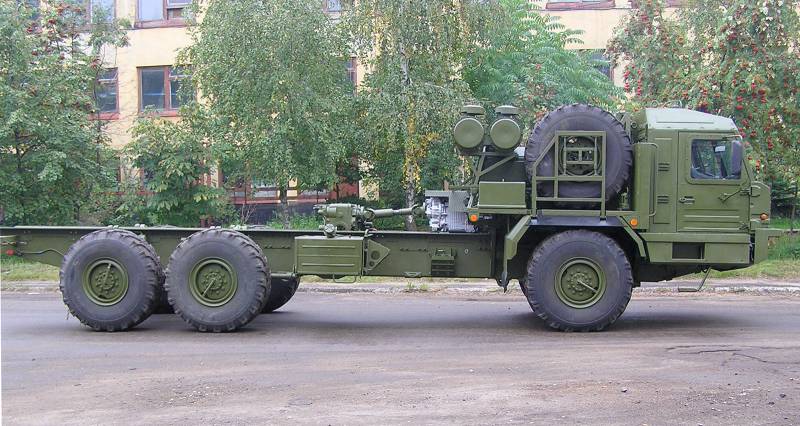 The back of the frame is designed for the installation of a particular equipment. Different modifications of the special machine BAZ-69092 receive various equipment that meets the requirements of the customer. This may be a cargo platform, a closed cabin, etc., up to launchers for rocket armament. There is also a rear hitch for handling payloads. With it, the car can tow a trailer weight.

The first prototype of the BAZ-69092, intended for testing, received a relatively simple target equipment. For the transportation of ballast, he received an onboard body. In this configuration, the chassis confirmed the design characteristics, which made it possible to develop and put in a series of several specialized modifications for various purposes. It should be noted that all such machines have their own designations that allow them to uniquely identify them.

The BAZ-69092-013, BAZ-69092-015 and BAZ-69092-017 chassis modifications are intended for installation of the 64L6 “Gamma-C1” radar equipment. Large bodies with special equipment, including radar antenna devices, are installed on the cargo platforms of such machines. The station type 64Л6 and its modifications use three special chassis, carrying different equipment. 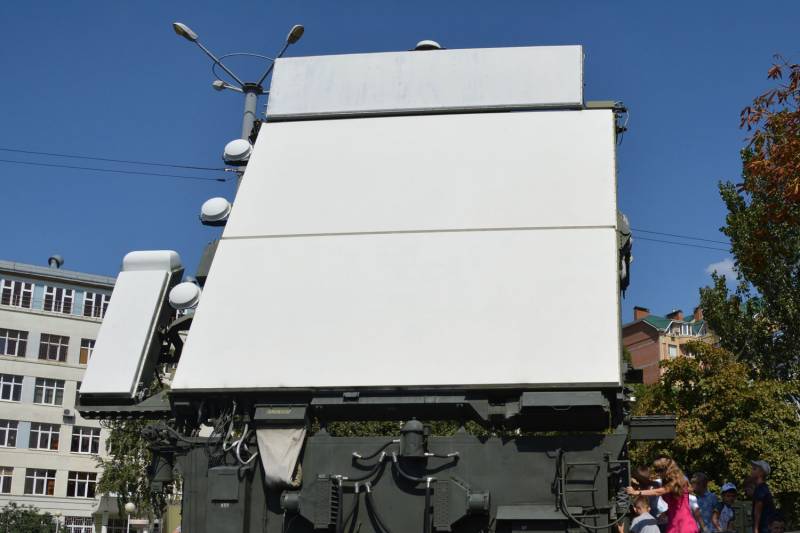 Special wheeled chassis BAZ-69092 are also widely used in the construction of modern air defense systems. This technique is used as the basis for self-propelled launchers, transport-loading machines and other means from the C-300 and C-400 complexes. At the same time, in connection with the dimensions of the products used, some of these machines are used in the configuration of the tractor, working together with special trailers.

In the BAZ-69092-021 modification, the chassis performs the functions of a truck or tractor. This version of the project involves the installation of an onboard body with rear loading. The payload can be protected by a textile awning, fixed on supporting arcs. In the configuration of the truck-tractor, the machine can transport or tow a cargo weighing up to 15 t.

According to reports, at a certain period the BAZ-69092 chassis were considered as promising carriers of special equipment for the engineering troops. With the use of such technology it was possible to build engineering and construction machines for various purposes. However, none of these projects could not reach full implementation. All new engineering vehicles based on wheeled vehicle chassis were later built using equipment from other factories. 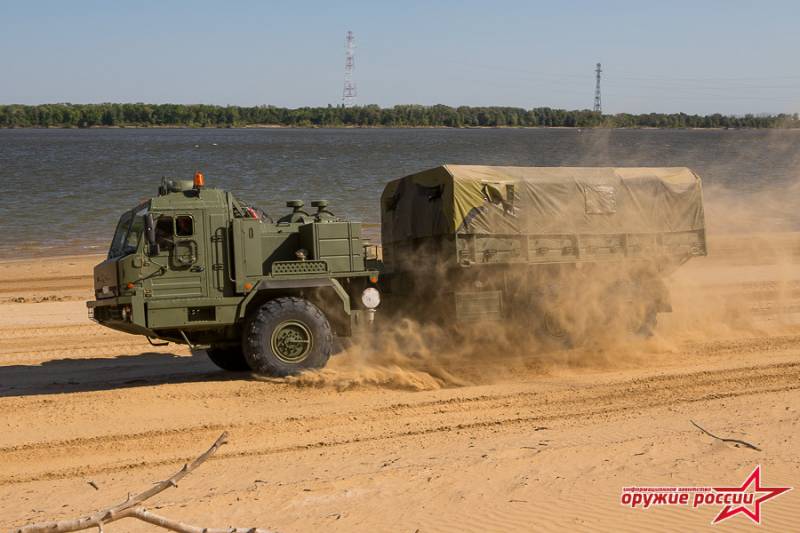 Commercial organizations are offered a special BAZ-69095 chassis, which is the civilian version of the BAZ-69092 machine. This sample is proposed for use in the construction of truck cranes, oil and gas complex machines, etc. The BAZ-69095 differs from the military base chassis by a less powerful engine, a slightly reduced payload and a simplified cabin configuration. For obvious reasons, a commercial model does not need protection against weapons of mass destruction, etc.

Special wheeled chassis, created in the framework of the ROC "Wax-1", were taken to supply in the middle of the last decade. Together with other samples, the BAZ-69092 machines of several modifications were introduced into mass production. This technique is mainly intended for the construction of a wide range of special machines and receives a variety of additional equipment.

In accordance with the original terms of reference, the BAZ-69092 chassis should have been distinguished not only by carrying capacity, but also by high mobility in all landscapes. Due to the use of a relatively powerful engine and a good undercarriage, all the cars of the family are able to move with full load on different soils. This, to a certain extent, increases the mobility of the troops as a whole, and of their individual complexes for various purposes.

The high maneuverability and mobility of the BAZ-69092 chassis was recently again confirmed in practice. In September, the 2017 of the Year, the Main Armored Directorate Directorate, organized the mileage of promising samples of military and special equipment from Bronnitsy near Moscow to Mount Elbrus. Together with other cars of different classes, the BAZ-69092-021 car participated in this event. Before entering the route, a payload corresponding to its maximum characteristics was placed in the back of such a truck. 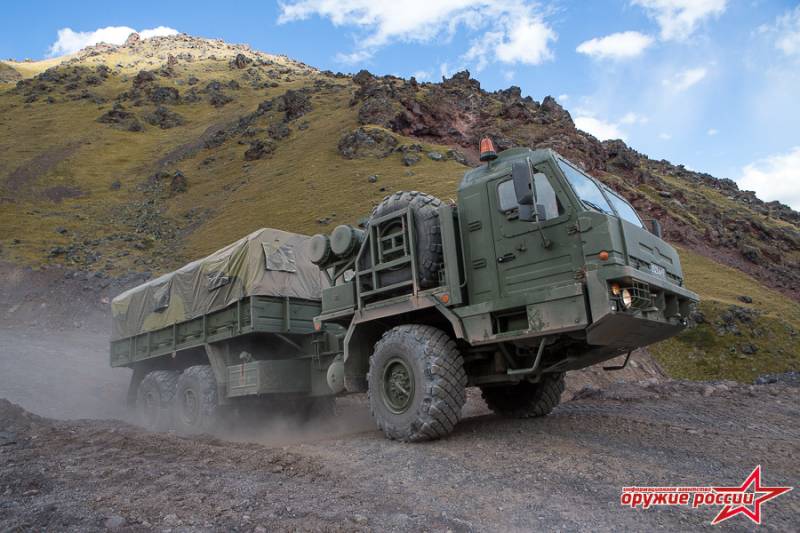 A column of military equipment passed along the Volga, after which it crossed the desert regions of the Astrakhan Region and Kalmykia. Then the crews went to the foot of Elbrus. The length of the route (one way) exceeded 2200 km. Machines were on the road for more than two weeks. During the run, several stops were made for various tests under special conditions. In addition, some stops were forced.

Like other samples of modern domestic technology, the machine BAZ-69092-021 successfully coped with the assigned tasks. The heavy chassis reached the final point of the route, and then returned to Bronnitsy. During the run, this machine has solved all the tasks. In addition, she had to participate in the "rescue operation." During one of the studies in the desert sand, an armored car stuck, and a special machine, characterized by high performance, took on the role of a tug.

The purpose of the development work "Voshchina-1" was the creation of a family of unified special wheeled chassis, capable of replacing similar equipment of foreign production. From a technical point of view, such tasks were successfully solved, and a significant number of special equipment on domestic chassis came into service. It should be noted that the deployment of the production of a number of BAZ cars did not lead to the complete abandonment of imported samples. However, in this case, the army was able to obtain a sufficient number of necessary machines with the required characteristics and capabilities.