Nobody goes anywhere. There are no tickets for B-52.

October 26 2017
82
The message about bringing the American "oldies" B-52 to combat readiness still continues to irritate our readers. To be honest, I do not understand. Not because there is too much conflicting information in our media. No, I just know a fairly high level of knowledge of colleagues. It is knowledge, not the ability to make assumptions. 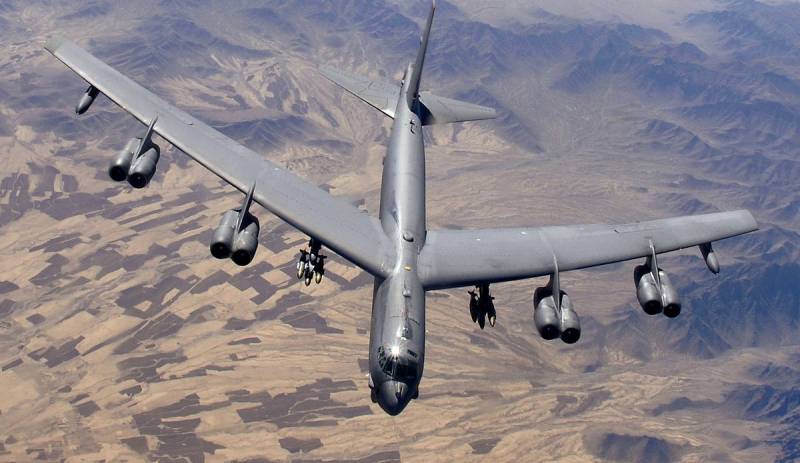 I can explain the situation from the point of view of the military. And in the comments, I hope, a lot of things will be clarified by colleagues. But first, let's return to the message from the USA. Two days ago, Defense One reported on the possible bringing B-52 into 24-ready mode. This has not happened since 1991. And by themselves, these "strategists" are more an anachronism than a bomber. But for countries that do not have modern air defense systems such as the latest Russian systems, they will completely disappear.

And the armament of such machines, even in a nuclear-free version, is serious enough. Cruise missiles (up to 20) that this aircraft carries may well cause some trouble for the enemy.

First of all, more precisely, before starting to destroy the American military, it is necessary to discover America. All the messages that the Internet is full of today are at the level of a quacking bird. A duck of pure water. IN aviation the compounds in which the "old men" are located, there was no order to transfer to the corresponding mode. And will not do. The percentage of fools in the American army does not exceed the same percentage in other armies.

So which country can the US use B-52 against? Against Russia? Against China? Against the DPRK?

Russia, as a country that has already “covered” the Far East with its systems, disappears immediately. Variants of successful use of old cars even of this class do not pass initially. Our air defense will remove these aircraft without much difficulty. China will do the same. Moreover, both countries will strike without hesitation. So, the third world ...

It remains a "thorn" in the form of proud Koreans. North Korea will not be able to shoot bombers on the approaches to the country. There are no such systems there. So, we can assume some success of such a blow. The loss of US aviation in this case will be quite within the planned limits.

However, from what is known about the armed forces of North Korea, it follows that the Americans will not do much damage. Koreans have considered protection against such threats.

First, the DPRK army is not based on open ground. Armament and military equipment are protected. Even artillery batteries are hidden in mountain caves. We don’t even need to talk about more serious weapons. Everyone understands everything. Secondly, the few test footage of missiles by North Korea that “accidentally” enter the world media, for an attentive person, give an answer to the question of which forces have priority. Koreans do not build stationary PU. All missiles were launched from mobile launchers.

There is one more fact that is noticeable in the frames of the test chronicles. DPRK rockets are created using a special technology, in which the fuel is in special capsules. Simply put, putting a missile into a combat state does not require the time that other types of missiles require. The time of bringing such a rocket into combat is measured in literally minutes.

From this it is clear that with the use of all the existing B-52 (and this, taking into account the units in storage 63), complete destruction of even Korean nuclear forces will not occur. Not to mention the North Korean army as a whole.

But I doubt the decision of Washington on the introduction of troops into the territory of North Korea. Similarly, the fact that the troops will enter the Japanese or southerners. The damage that will be inflicted on these countries will cool any hotheads. And the myth of the Western media about the great desire of Koreans to "destroy" the regime of Kim Jong-un, to put it mildly, does not correspond to reality.

Why am I so sure of unreliable information? Maybe the US military is so eager to observe secrecy that we can not see the preparation of strikes? Alas, I will disappoint. A strategic bomber cannot simply be raised and sent somewhere. Even the old B-52 (start of production - 1951 year) - the pleasure is expensive. And to control this plane to anyone they do not trust.

So, it is necessary not only to prepare the crews for strikes, but also to ensure their “flying off”. Provide training flight routes. Simply put, airplanes must fly. And fly on certain routes and in a certain order. That's when we see this, then we can talk about some real steps in preparing some actions.

It seems to me that information about the readiness of B-52 to strike at North Korea is another American "aircraft carrier". From the same series. Let the world see that we are ready, we can. But, on the other hand, in the light of the above, refusing to strike puts the United States in a very awkward position. The country becomes ridiculous in the eyes of others.

A small country, a country without big ambitions, and the Americans will break their “teeth” there.

Ctrl Enter
Noticed oshЫbku Highlight text and press. Ctrl + Enter
We are
Results of the week. “In our cooperative, the board is always agreed”Results of the week. "God forbid to see Russian revolt, senseless and merciless!"
Military Reviewin Yandex News
Military Reviewin Google News
82 comments
Information
Dear reader, to leave comments on the publication, you must to register.