October 25 2017
158
In Russia, Stalin can be worshiped again, says Andreas Rüch, correspondent for the Neue Zürcher Zeitung. Stalin needed the "Putin regime." But Lenin worship in Russia is not accepted. Why? Lenin scares the Kremlin with the word "revolution", believes Victor Sebastien, the author of the complete biography of the proletarian leader, written for the centenary of the Russian revolution. 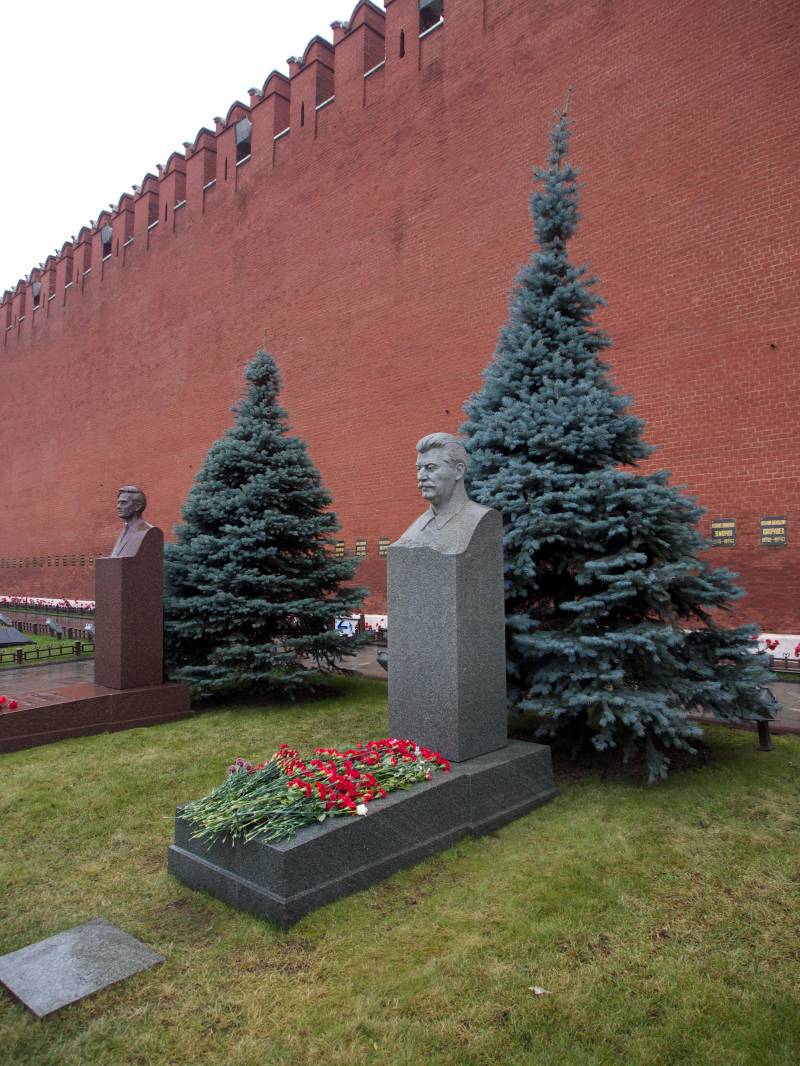 Andreas Ryush, correspondent "Neue Zürcher Zeitung", the author of a report from Moscow, believes that “nostalgia for Stalin” is acquiring “more and more interesting shades” in Russia. The journalist sees the roots of Stalin's glorification in the Kremlin: Stalinism "can be used to legitimize the current regime."

The work of the sculptor Zurab Tsereteli is still the largest monument to Stalin in Russia. The monument was erected “with the official blessing” of the Kremlin, the author believes. Earlier, the image of Joseph Stalin in the country was erased - the beginning of that was laid by N. Khrushchev, who gave "impetus to the first wave of de-Stalinization." In 1961, "Stalin's body was taken from the Mausoleum on Red Square, and soon all the monuments to the mustache of the Georgians disappeared," writes Ruche. Stalin became almost a taboo.

After the “perestroika” and the fall of the Soviet Union, many archives were opened, freedom of the press appeared: the people could discuss the “crimes of the Stalinist regime”, as a result of which millions of people suffered.

And here's the paradox: Stalin "returns from oblivion." There is a "new wave of recognition." Some historians point out that in recent years, from 70 to 100, monuments to Stalin (70 bis 100 Denkmäler für Stalin) were supplied, mainly at the initiative of the communists and businessmen. 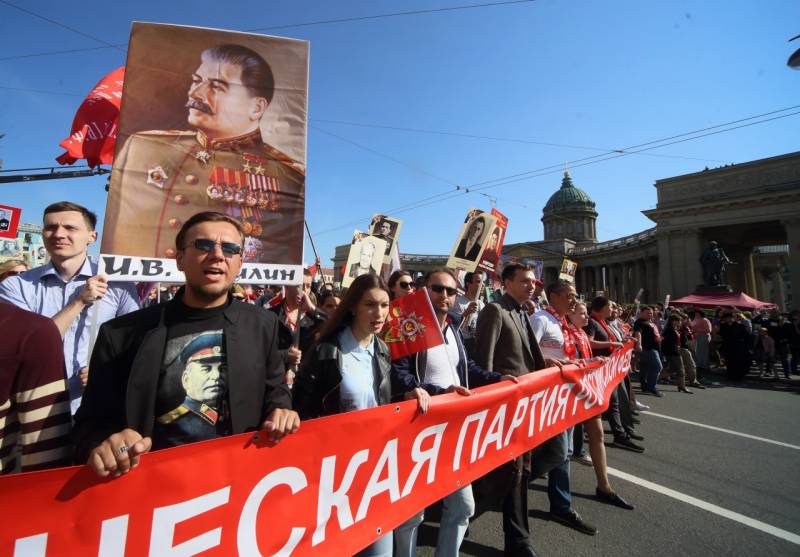 St. Petersburg, May 2016. Participants of the "Immortal Regiment" parade along Nevsky Prospect.

The Levada Center, a public opinion research institute in Russia, has long recognized the growing popularity of the former "father of peoples." 46 percent of Russians surveyed express a positive attitude towards Stalin (data from the beginning of this year); in 2012, there were only 28 percent. Another survey recently showed that Russians consider Stalin the most outstanding personality of all time (38% of respondents; in 1989, only 12%). At the same time, the share of those who consider massacres in the Stalin era an unforgivable crime has sharply decreased over the past ten years: from 72% to 39%. 25% even consider these crimes "historical a necessity. ”

How can such responses be interpreted? The question, in general, does not exist: if in Germany such a change in sentiment and similar ignorance were ascertained regarding Hitler, this would be a truly terrible, deafening signal, the author believes. In Russia, this picture is somehow “relative”: other sociologists point out that the current Stalinists do not want new repressions, deportations and the re-introduction of a planned economy. At the same time, Stalin is considered a symbol of effective leadership, the fight against corruption and the welfare state (even if this is a historically untenable opinion).

Lev Gudkov believes that the population of Russia does not want a repetition of the Stalin era: "People do not want to live under it."

The new cult of Stalin did not arise naturally, it is "the result of a deliberate policy." On the one hand, the Kremlin recognized the fact of mass repressions under Stalin, on the other - supported his rehabilitation as a wise leader, the father of the country, a symbol of the world role of a strong Moscow.

And this campaign began immediately after Putin came to power, that is, in 2000. First of all, Stalin’s partial rehabilitation is linked “to the ideological foundation of the Putin regime,” the author writes. The Kremlin legitimizes its rule by allegedly protecting Russia from foreign enemies, especially from the United States. The victory over Nazi Germany under Stalin made the country a world power. For the “Putin regime,” Victory Day (9 May) is “the most important political holiday in the country,” reminds Ruche. But the victory of 1945 of the year cannot be celebrated without giving an assessment to the then leader. This is what the “subtle approach” is required for. And Putin expressed his opinion on Stalin in 2009 in the sense that he condemned the repressions, but at the same time “gave the dictator absolution”, noting that the country had come to victory, and therefore it’s impossible to throw a stone at those who led the country to this victory. Putin also considers industrialization a great merit of the Stalin era.

Quilling from here and takes the whole essence of the new "worship of Stalin." There is nothing unexpected or even new for him. Ryush believes that Stalin will get a “normal place” in “official history”, where the Kremlin will write him “as a figure with light and dark sides”. On the other hand, such a "normalization" will mean "eliminating" the exclusive role of Stalin as "the organizer of mass crimes against his own people." The correspondent traditionally compares this role of Stalin “on a global level” with that of Hitler and Mao.

According to the author, the Kremlin’s new approach to Stalinism shows that the Russian state is “dishonestly dealing with the past.” The de-Stalinization is simply "not in the interests of the current leadership." Myths are flourishing in Russia, for example, statements like the fact that "during periods of external threats, a policy of repression is necessary." Hence the well-known attitude in modern Russia towards the liberal opposition: flows of slander are pouring on it, it is called the “fifth column” and even traitors to the Motherland.

In parallel with Stalin, foreign analysts took up the figure of Lenin.

Victor Sebastien wrote one of the most complete biographies of V. I. Lenin. The book was published by publishers on the upcoming anniversary of the Great October Socialist Revolution. Interview with Sebastien was taken by the Portuguese subscription newspaper "Diario de Noticias" (translation source - "InoSMI"). 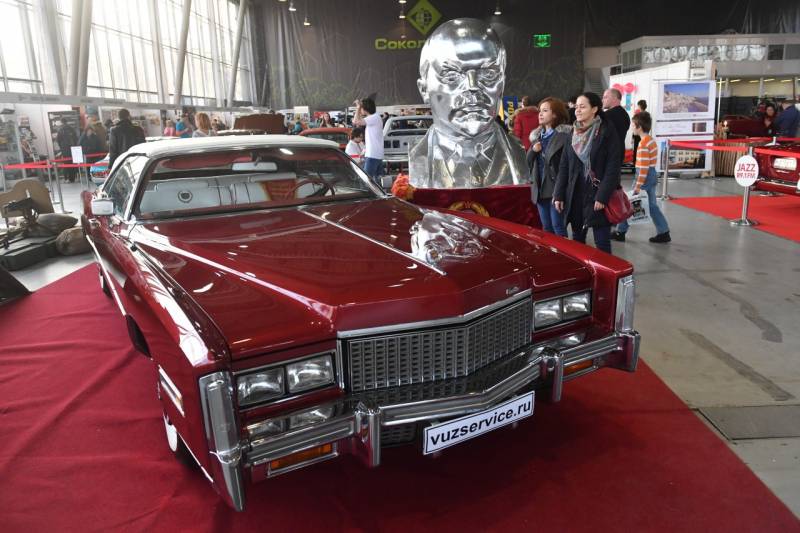 An exhibition of vintage cars dedicated to the 110 anniversary of the personal garage of His Imperial Majesty at the Sokolniki exhibition center. 8 March 2017, Moscow. Car "Cadillac Eldorado" and a bust of Vladimir Lenin

At the present time, Lenin "would have been the star of Twitter - this is the main message of this interview. Lenin's favorite word is “shoot.” Lenin is a populist to a large extent, and it is relevant now. Lenin “shamelessly lied, believed that victory was the main thing, he promised everything in the world, offered very simple solutions for very difficult problems, he knew that he needed a scapegoat ...” In modern politics “there are a lot of people like him”. Therefore, Lenin would be the star of Twitter, and his program would fall apart "into unusually simple and short slogans."

Many events of the 20th century, according to the author of the biography, became the answer to the “Russian revolution” of 1917. Victor Sebastien is convinced that “without it there would have been no Hitler, World War II, the Cold War ...” And the legacy of that “Russian revolution” continues to live to this day. Leninist communism gained its followers in some countries of Asia and Africa. In China, the Communist regime still rules.

Regarding the fact that the Russians today are not satisfied with special official celebrations in connection with the anniversary of the revolution, the historian said the following (not forgetting to mention Stalin): “The reasons explaining this are simple and complex at the same time. Putin and his entourage have no problems with Stalin: today they are rehabilitating him not as a communist, but as a great Russian nationalist. They know that it is also impossible to forget about Leninism, because it was part of the life of any Russian older than 40. But Lenin pulls the word "revolution" behind him. And Putin hates him. And, in general, it is clear why: today, reminders that the Russians can get rid of the corrupt and autocratic despot through the revolution are not very welcome ... "

According to the author of the book, Stalin is identified with cruelty and paranoia. However, the Soviet state was built by Lenin. Terror, intolerance and violence, along with the thesis “the end justifies the means” —all this is Lenin. Stalin "only brought" all this "to perfection."

“Give me a hundred people, and I will turn Russia over,” said Lenin. And turned! One of his books, “What to do?”, As the expert points out, is used today by the IG (prohibited in Russia). This book was studied and Hitler. If Lenin wrote today on Twitter, he would give out a short message: “Revolution again!” Yes, he would view the current moment as revolutionary. If the leaders are no longer able to govern according to their usual scheme, and the followers refuse to obey the old scheme, this is a revolution.

So, according to some foreign journalists and historians, the Kremlin openly acknowledges the fact of the "massacres" under Stalin, heir to the Leninist policy of terror and intolerance. Gently pulling away from Comrade. Lenin, who is already frightened by the very word “revolution”, the current government in Russia whites Joseph Stalin, calling him an outstanding statesman who managed to lead the USSR to victory over Hitlerism. Whitened by Stalin because his figure is needed by the current “regime”: the power in Russia of the 21st century wants to rely on the same totalitarian principles, explaining this by the onset of external enemies and the betrayal of internal enemies. In the West, they believe that this kind of policy is “dishonest” in relation to history, because it creates “myths” and gives rise to incorrect historical conclusions that are convenient for the Kremlin, but have nothing to do with the truth.

Obviously, in Europe, where the role of Stalin is compared with the “role of Hitler,” the winner in the Great Patriotic War is put on a par with the loser.

Ctrl Enter
Noticed a mistake Highlight text and press. Ctrl + Enter
We are
Results of the week. "God forbid to see Russian revolt, senseless and merciless!"Syria: Americans scare themselves, and Asma Asad buys chairs
158 comments
Information
Dear reader, to leave comments on the publication, you must to register.