The destruction of Ukraine on the "manuals" of the XVIII century 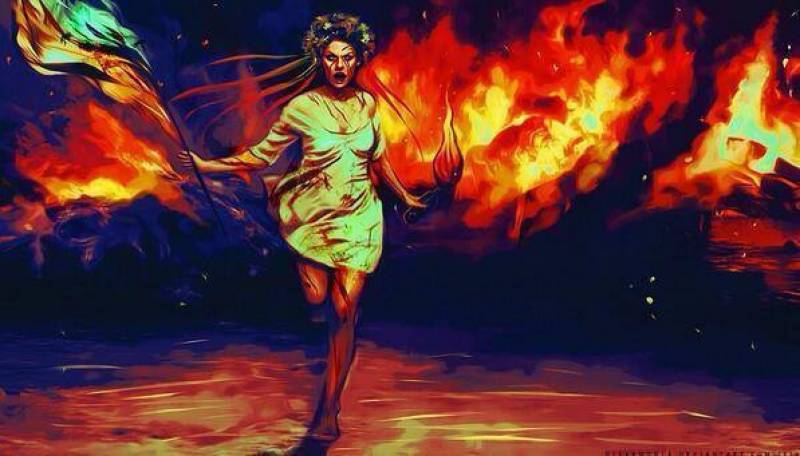 Ukraine today is being destroyed and disintegrated almost in strict accordance with the manual of the end of the 18th century, when the decrepit and unviable Rzecz Pospolita after the bright and suicidal outburst of 1790's Polish nationalism has sunk into oblivion. The Poles themselves dug a grave to their state and did everything to make it disappear from the map of Europe as quickly as possible. Now a similar drama is unfolding before our eyes, in which the “patriots” of Ukraine, in fact, do the same.

By the way, today marks exactly 223 of the year from the day when AV Suvorov accepted the capitulation of Warsaw, and yesterday the 222 anniversary of the last and final division of the Commonwealth between Russia, Prussia and Austria struck.

Both events are closely related and are so interesting in their circumstances that it is impossible not to recall them today. This should be especially interesting for “patriots” in Kiev, who repeat the mistakes of their Warsaw colleagues more than 200 years ago.

The revolution of "gidnosti" in Polish

After Rzeczpospolita was “divided” for the first time, it became clear that without a complete restructuring of the state machine, this state is not viable. The Polish oligarchy managed to achieve a complete breakdown of the public administration system, and the reluctance to change something in the structure of the country imposed the death sentence on the state in the foreseeable future. 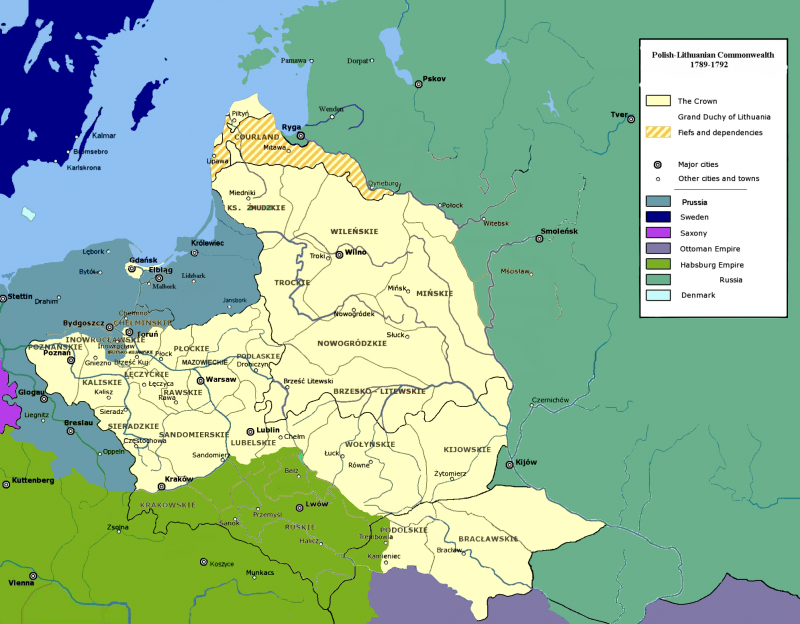 Most of all, Rzeczpospolita was tormented by periodically created gangs of confederate oligarchs dissatisfied with the central government and gaydamak detachments.

Neither of them even thought about the good of the country, but simply demanded to grant themselves the right to plunder it uncontrollably.

Hope for change came from Poland with the beginning of the Great French Revolution. Part of the Polish patriots saw it as a chance for their country. They went to another Maidan and began to demand change in the country. At first, their demands were not very radical, but the appetite gradually grew, and as soon as the aged Polish king Stanislav Ponyatovsky joined them, the time of the Polish revolution of “hydration” came. 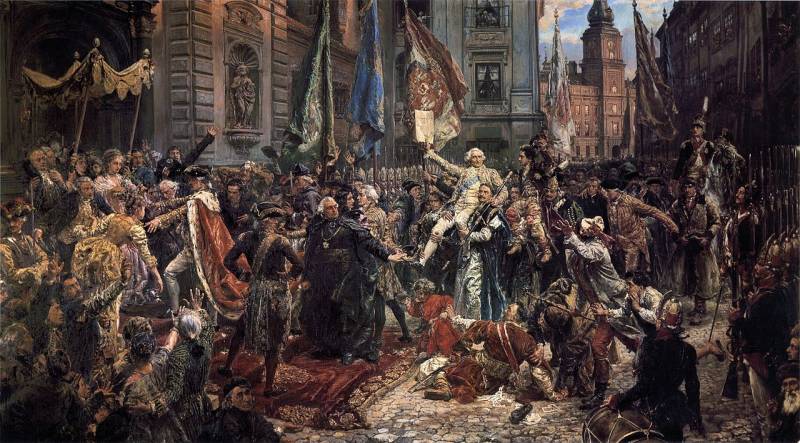 The coup succeeded, but according to the already old and unkind Polish tradition, an “anti-Maidan” was formed in the country, that is, another “confederation”, whose emissaries quickly found themselves in front of the clear eyes of Russian Empress Catherine II.

Here in our stories there is an important discrepancy with today. In 1793, Catherine decided not to talk alarms with the EU, that is, with a democratic and enlightened Europe, but simply agreed with the King of Prussia Frederick William II and introduced troops to restore order and very quickly achieved success.

In the meantime, Western "partners" have shown true cunning towards the Poles. Even before the secret agreements with the Russian empress, the Prussian king promised Poland protection from the encroachments of Russia and thus became the guarantor of her territorial integrity. But as soon as Catherine offered Friedrich Wilhelm western Poland, he immediately agreed and hit the Poles in the rear. 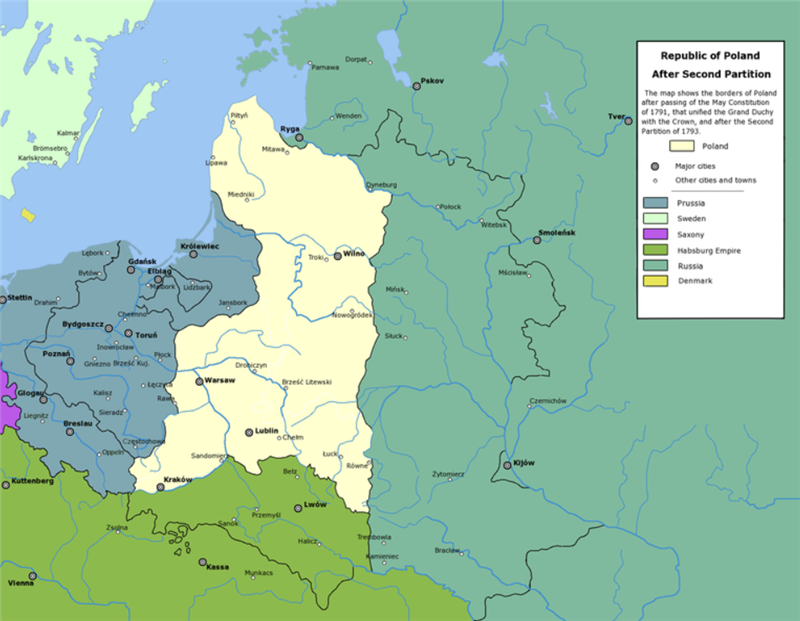 The second section of the Commonwealth deprived it of more than half of the territories and population. From a large European state, it turned into an ordinary and, moreover, disorganized state formation, in which “patriots” also came to power.

The treacherous insidiousness and insane indomitability inherent in the Polish patriots did not allow these remnants of Poland to survive either. The very next year, 1794, the Poles unexpectedly attacked the unsuspecting Russian garrisons and were able to cut out some of them, than they signed their final death sentence to their state. This uprising was doomed to defeat in advance, and only the inconsistency of the actions of the allies allowed him to continue for six months.

The agony of Poland lasted for half a year and ended on October 25 with the capitulation of Warsaw in October 1794, and the following year the Polish statehood was abolished by the decision of Russia, Austria and Prussia.

As we can see, the history of Poland at the end of the 18th century most wonderfully resembles the history of today's Ukraine. Moreover, some changes in the scenario (well, Putin did not bring troops into 2014, the year) did not greatly influence the course of historical processes.

Yes, Russia did not invade Ukraine and did not go to Kiev, but simply supported Donetsk and Lugansk “confederates” after the coup of 2014 of the year. But this did not particularly affect the further course of history.

We already see that gradually the West (and today it is Poland) is already inclined to decide to betray Kiev and get its piece of cake (Lviv) when sharing. Hungary, one of the heirs of Austria-Hungary, also does not lag behind the Poles and also tries on the Ukrainian Transcarpathian region.

We also remember that it was Poland that was one of the guarantors of Kiev and promised him in the 2014 year all possible assistance against Moscow. History repeats itself. It also repeats itself in the indomitable and short-sightedness of the Kiev “patriots”, who, after their Russophobia, completely detached themselves from reality and quickly dig the grave of Ukraine’s remnants.

It remains only for the “patriots” in Kiev to raise a revolt against the central government, and the situation in Ukraine will once again become an exact copy of the Polish 200 years ago. It’s not a fact that they and their sponsors will go for it, but something tells me that it will not change anything in the fate of the state, which will remain in history under the name “Ukraine is not Russia”.

Ctrl Enter
Noticed a mistake Highlight text and press. Ctrl + Enter
We are
Polish claims to Ukraine. Will Warsaw decide to “bite off” Galicia?Reports from the militia of New Russia for 1 September 2014 of the year
52 comments
Information
Dear reader, to leave comments on the publication, you must to register.