Israel hit an ally in the back 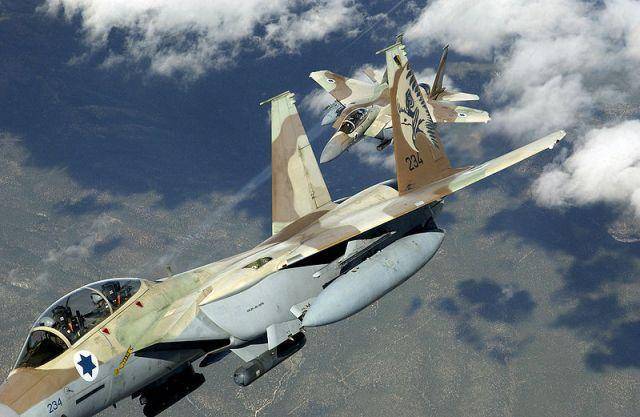 Times change and we change with them. Israel has persistently tried to remain the same for years and today realizes that it is late for the outgoing train to reshape the political maps of the Middle East: "Grab the bags, the station leaves!"

For many decades, nothing has changed. Jerusalem (Jerusalem - the official capital of the state of Israel, there are all government agencies) relied on an armed and very dangerous Washington. The main enemies were Syria and Iran. Traditional claims, shootouts, recriminations. The Arabs diligently tried to destroy the "small but proud state." Armed to the molars and evil, the evil Jews fiercely fought back against the enemy, a hundred times larger in number, periodically performing exemplary whipping of their neighbors. They responded with missiles that rarely found a target, but they worked perfectly to maintain military-political hysteria in Israel itself.

When, in 2011, the "Syrian people in revolt", with the support of the igilovsk terrorists created and supported by the Americans * populated Syria, Israel thoughtlessly supported the "rebels". Israeli jihadis were delivered weaponinjured were treated in Israeli hospitals, Israeli artillery and aviation periodically supported terrorists in their fire attacks on Syrian troops. The formula "Enemy of my enemy my friend" seems to work.

Until Russia came to the Middle East.

In two years, the losing player, Bashar Asad, was on horseback, and the igilovts were fleeing Syria en masse, having lost even American support. The coalition that has arisen around Russia does not simply win, it has united former irreconcilable enemies, such as Iran and Turkey. And only self-confident Israel continued mindlessly to follow the same course.

No, political consultations were held. The head of Israel even flew to Russia to talk with Vladimir Putin. Israeli Defense Minister Avigdor Lieberman met with Russian Defense Minister Sergei Shoigu and flew to Washington to meet with Pentagon chief James Mattis. It did not lead to visible changes. Jerusalem continued to periodically bombard the Syrian troops and (obviously for the sake of the United States) to demand that everyone “leave the Kurds alone”.

However, literally in the last 2-3 of the day several landmark events occurred. The support of the United States and Israel to the Kurds was clearly little. They not only left Kirkuk and a third of the Iraqi oil fields they controlled, but also postponed the elections scheduled for November 1, at least until next spring. Obviously, Israeli-American support was not enough.

In Israel itself, for the first time in several years, Bashar Asad was not accused of shelling the territory of Israel. Although last week the Israelis fired at the Syrian troops, guided by their own words: "Whoever fired at us, Assad is responsible for the territory of Syria."

However, in this particular case, responsibility for the shelling was laid on the Lebanese Hezbollah, and not on the Syrian government. And yesterday, the unthinkable took place at all - the Israeli Air Force launched an airstrike on the positions of the terrorists. Although those years quietly controlled the territory near the Golan Heights. In fact, like Christ in his bosom. In a literal (almost) sense.

This information was confirmed in the Syrian Observatory for Human Rights (SOHR), which is headquartered in London.

As reported by this not very respected, but very pro-American, Israeli planes bombed terrorists from Jaish Khalid ibn al-Walid, who settled west of Darayya (near the town of Yarmuk).

According to the Observatory, at least a dozen militants were killed, including two women. It is assumed that at least four commanders gathered at the meeting were destroyed. Given the proximity of these jihadists to Israel, he could easily have such information.

And these are only the first signs of the coming changes. However, Israel still will not be able to enter the coalition created by Russia. Too strong pro-American lobby created in the country since the Soviet Union ceased to help him created Israel and switched to the Arabs.

The pragmatic position of Russia in the last decade and a half and the two millionth (essentially Russian) part of Israel guarantee Russia success on this most important part of the Middle Eastern front. But it will take a lot of time to do this - for too long, Moscow has refused to give Jerusalem friendship and cooperation.

And just the reformatting of Syria under the dominant position of Russia in this process provides an excellent opportunity to inflict a severe blow to the United States over the long term, turning Israel over the years if not as a strategic partner, then at least as a neutral ally.

And there, not far from the “dream come true” - our naval base fleet in almost Russian Haifa.

* - the organizations mentioned in the material are banned by the UN, Russia and all civilized states.

Ctrl Enter
Noticed oshЫbku Highlight text and press. Ctrl + Enter
We are
Bashar al-Assad: In Syria, not the “revolution” that the enemies are talking about, but the revolution of the army and the people against terroristsThe Palestinian problem and the question of the survival of Israel in the future
Military Reviewin Yandex News
Military Reviewin Google News
148 comments
Information
Dear reader, to leave comments on the publication, you must to register.