October 25 2017
35
For obvious reasons, the army needs not only military equipment, but also construction or engineering vehicles. For construction of various objects, cleaning of obstacles, etc. engineering troops need specialized samples, including those created on the basis of commercial vehicles. An example of such an approach to the re-equipment of engineering parts is a promising project of a wheeled road vehicle of an armored BMDB.


To date, a large number of various specialized vehicles with various capabilities, built on the basis of serial armored vehicles, have been adopted by the engineering troops. It is now proposed to build similar samples using commercial chassis. One of the first domestic projects of this kind was the result of international cooperation. Two developers have joined forces and equipped the refined chassis of foreign production with new equipment. 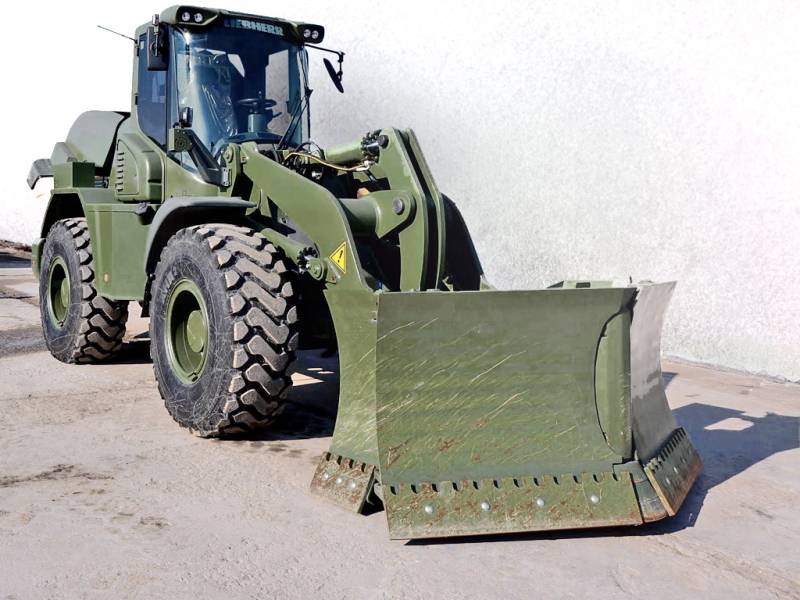 The first configuration of experienced BMDB

The KDMB project was created by the 41-m Central Railway Engineering Plant (Lyubertsy), which is part of the Uralvagonzavod Corporation, in cooperation with German specialists from Liebherr. The aim of the project was the adaptation of the existing front loader to the solution of special problems faced by military engineers. Work on the project started a few years ago, and to date has led to the most serious results.

Last year, 41 Central Plant and Liebherr took part in the Army-2016 international military-technical forum. In the open area of ​​this exhibition, a prototype of the “Wheeled Road Armored Vehicle” was demonstrated. It should be noted that at that time the prototype did not fully correspond to its name. In particular, it did not have a developed reservation.

In 2017, the joint project was again presented at the exhibition in the Patriot park near Moscow. At this time, demonstrated a prototype with a full range of protection. The rest - from the point of view of the basic structural elements, power plant, chassis and target equipment - the updated prototype was similar to the one presented in the past.

Shortly after the new public demonstration, the KDMB machine had the opportunity to demonstrate its potential in real conditions. In September, the Main Automobile Armored Directorate of the Ministry of Defense organized a new expedition with the participation of several promising samples of automotive and special equipment. At this time, a number of modern cars had to go through a difficult route along the banks of the Volga, through the southern deserts and through the mountains of the North Caucasus. The end point of the race was the city of Elbrus.

The expedition was attended by several modern armored vehicles and trucks of the latest models. In addition, an experienced BMDD was involved in the run as technical assistance. Moving in the same ranks with other domestic machines, she had to demonstrate their driving and performance. If necessary, she had to clear the way and ensure the passage of other tested equipment.

Within a few weeks, different types of machines under the control of military specialists passed a given route, which made it possible to clarify their real capabilities. According to some reports, during the run, the Wheeled Armored Road Car had to not only follow other equipment, but also use its own special equipment.

According to known data, the 41 Central Railway Plant and the company Liebherr decided to use a fairly simple and obvious approach when creating the BMDB project. As a basis for the engineering machine, a serial front-end loader was taken, which should be partially modified and equipped with some new units. The required design changes were primarily related to survivability in a combat situation. Unlike civilian commercial models, the military "Wheeled Road Armored Vehicle" needs to protect the cab, power plant and other units.

The basis of the KDMB is a two-axle front-end loader with an articulated layout, equipped with a diesel power unit. There is an advanced hydraulic system used to control special equipment. Despite the military purpose, during the restructuring, this machine retains its main features, primarily the layout.

The units are mounted on an articulated frame consisting of two main devices. Its front element has attachments for the wheel axle, and also serves as the basis for installing the boom with the working body. In front of the rear frame, directly above the hinge, is the driver's cab. Behind it is the engine compartment, below which the rear axle is installed. Two large machine units are connected by a hinge, allowing them to move relative to each other in a horizontal plane. Their position is controlled by a driver-controlled hydraulic system.

KDMB is equipped with a hp 180 diesel engine. The engine torque is issued both on the chassis and on the hydraulic system units. As part of the chassis used two axles with large diameter wheels. The articulated layout with controlled mutual position of the frame elements made it possible to abandon the controlled front axle - maneuvering is carried out due to the “bending” of the whole structure. 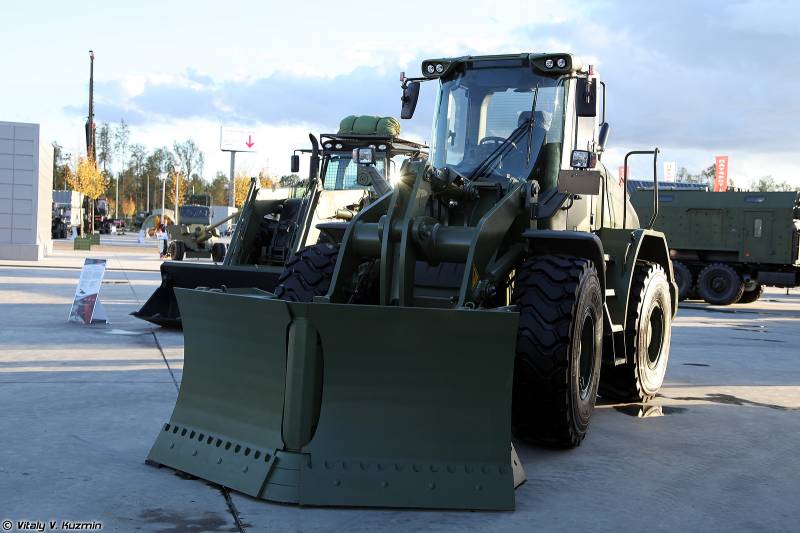 In the central part of the car is a relatively large driver's cab. The first prototype, demonstrated in 2016, had an unprotected cabin. In the framework of the further development of existing ideas, a new habitable compartment was developed. The cabin with anti-bullet and anti-fragmentation armor has a fairly simple form and consists mainly of flat panels located at small angles to each other. To ensure the best view, the cabin does not have a full frontal sheet, instead of which a large-area armored glass is installed. There are openings for additional glazing in the sides and the stern of the cabin. On the left side is the door. In view of the high height of the cabin, a ladder is also installed on the left side.

The driver is invited to work in a closed volume, because of which the project provides for the use of certain life support systems. The cabin is equipped with a filtering unit and an air conditioner capable of maintaining an acceptable microclimate in a wide range of external conditions.

The engine compartment of an engineering vehicle is proposed to be covered with its own armor cover. To protect the engine and its associated units, a housing of a relatively complex shape, formed by a large number of flat surfaces, is used. It is curious that outwardly such an armored hull resembles regular aggregates of commercial Liebherr loaders, for obvious reasons, having no protection.

In front of the rear axle wheels are additional armor boxes that perform the functions of protecting the fuel tank and other devices. Own wheel protection, however, is not provided. At the same time, the rear wheels are covered with developed arches.

A standard boom is used, built on the basis of a pair of side beams and a central articulated unit. Movement control blade or other working body by using several hydraulic cylinders. Depending on the type of the problem being solved, the BMDB can move the working body in a vertical plane and raise it to a considerable height above the ground.

In 2016 and 2017, the exhibition samples of the “Wheeled Armored Road Vehicle” were completed with the same set of special equipment. A bulldozer blade, which had a variable geometry, was attached to a lifting boom. This product consists of several main parts. The largest are the side panels of the direct type, equipped with knives on the bottom edge. On the sides they are equipped with folding devices of similar design, differing in smaller width. Between the two main panels of the blade is placed the coupling unit, overlapping the central gap, regardless of their position.

This configuration of the blade allows you to carry out earthworks in different conditions. Depending on the current task, type of soil and other factors, the blade may have a wedge-shaped or direct shape. With side flaps folded back, the blade width does not exceed the transverse dimensions of the machine. Their use, in turn, allows to increase the width of the processed strip.

When converting a commercial chassis to an experienced KDMB, a device was also created for placing special equipment in the rear part. It is proposed to install the equipment of the corresponding sizes on a small platform, which is a continuation of the frame. For proper load distribution, the platform is reinforced with triangular vertical elements supporting it on the sides. Well-known prototype uses this platform as a support for the winch. This device is rigidly fixed in place and gives the cable back.

Reportedly, the curb weight of the BMC reaches 16,6 tons. In the transport position on a good road, it is able to reach speeds up to 45 km / h. All systems are controlled from the driver’s workplace. The crew consists of only one person.

According to available data, the “Wheeled Road Armored Vehicle” is primarily intended for the organization of tracks and ensuring the passage of other equipment. When it is impossible for military or automotive vehicles to move along the available surface, the BMDB must level the terrain using its dozer blade. Its design allows you to pick off some obstacles, as well as move the soil of different types. 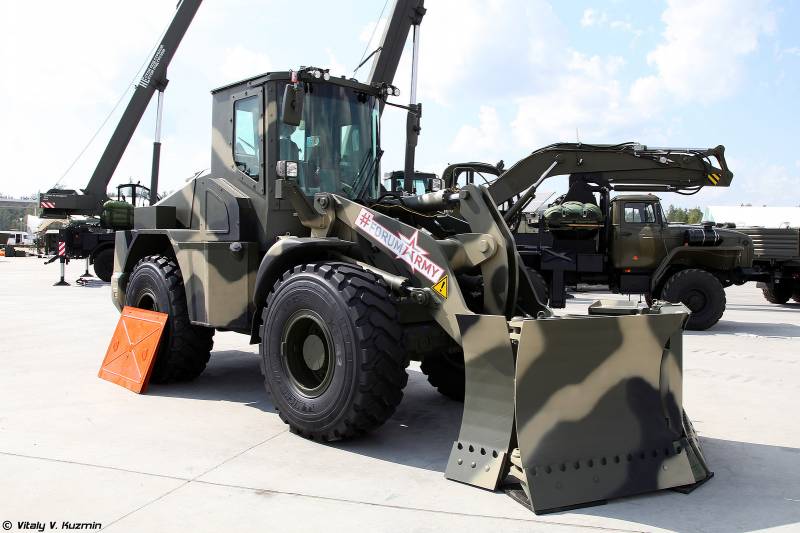 The current version of the Wheeled road car

The presence of a winch also allows you to solve some other problems. For example, this unit can be used to help stuck cars. Other situations are also possible in which a cable may be useful.

It should be noted that German-made serial wheel loaders are not only equipped with bulldozer dumps. This technique is also equipped with buckets of various configurations. It can be assumed that in the course of further development, the BMCB will be able to use various special equipment necessary for solving certain tasks.

As far as we know, to date, the BMC has passed at least part of the required tests. In addition, she took part in the run from the Moscow region to Elbrus. All this allows us to determine the real possibilities and prospects of the original technology. Apparently, in the near future a potential customer will make a final decision, after which an order may appear for a certain number of serial engineering machines.

As the main customer, the industry considers the military department. Nevertheless, this technique may be interesting and the Rosguards. At the beginning of 2017, the command of this structure announced its plans to abandon engineering equipment, built on the basis of army tracked armored vehicles. Wanting to get an economic benefit while maintaining the required potential, the Rosguard plans to switch to wheeled vehicles. Thus, a promising BMDB may be of some interest to such a customer.

Armed forces need engineering vehicles of various classes that have certain capabilities. A curious version of this technique was recently proposed by Lyubertsy designers. In the future, the main ideas of the promising project were developed, which led to the emergence of the BMDB in its current form. Not so long ago, an experienced technique was tested, the results of which can be put into service. What will be the future of the original engineering machine - time will tell.

Ctrl Enter
Noticed a mistake Highlight text and press. Ctrl + Enter
We are
Multi-axle rocket carriersTheory and practice of engineering operations
35 comments
Information
Dear reader, to leave comments on the publication, you must to register.