Constitutional Court of Moldova recognized I. Dodona "unable to fulfill the duties of the President"

October 24 2017
74
Urgent news come from Moldova. Speaker of the Moldovan Parliament Andrian Candu declared himself acting president. According to him, he signed a document that suggests the appointment of Minister of Defense of the Republic of Moldova Eugen Sturzu. The current president Igor Dodon speaks against the appointment.


Since the president was against it, the government announced that Dodon "is refusing to fulfill the duties of the president." With the corresponding request, representatives of the Cabinet and Parliament appealed to the Constitutional Court of Moldova. For three days, the Constitutional Court of Moldova passed a decision on “finding Igor Dodon in a state of temporary incapacity for presidential duties”.

Moreover, the Constitutional Court of Moldova announced that Dodon “was obliged” to sign a document on Sturza’s appointment as the new Minister of Defense of the Republic.

The information was confirmed that Eugen (Eugene) Sturz, the speaker of the parliament, who endowed himself with the powers of the president of Moldova, appointed the head of the military department.

The current president called such actions discredit the presidential post in the country. 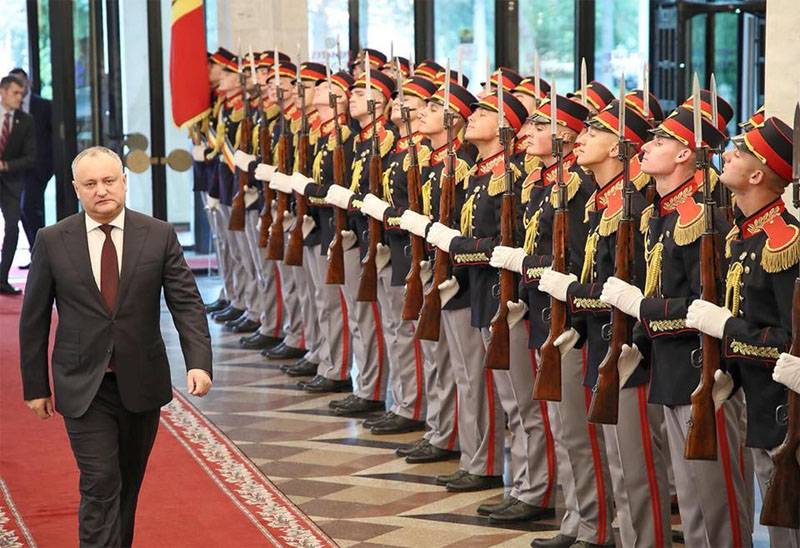 The regime will fall into a hole that it digs for others.

The oath of office of the Minister of Defense goes beyond political legitimacy and demonstrates how powerlessness causes the authorities to make serious mistakes.

By not allowing the Democratic government to control the president’s actions, we forced them to use the last tool they controlled - the Constitutional Court.

But the precedent that the Democrats dared to set up will become a tool from which they themselves will suffer. They will be amazed by the boomerang that they themselves launched.
I am sure that these methods will not find understanding either inside the country or outside its borders. They can be called anything, but not democracy.

I assure citizens and foreign partners that in the future neither the government nor the parliamentary majority of democrats will be able to exert political pressure on the president of the country. I received a mandate from the people and will only obey the people.
And only people, and no one else, can send me to resign from the presidency. The government of the Democrats can not send me to resign, as if they did not want.

Now all citizens were able to verify the need for a transition to a presidential state, where the directly elected head of the country has additional powers provided for in the Constitution, as required by political logic.
Early parliamentary elections, the socialist parliamentary majority and the presidential state remain the only rescue solution for Moldova.

- We will conduct an extensive information campaign and collect signatures in support of the presidential state.
- I will not give in to pressure and will not sign something with which I disagree and which is detrimental to the interests of the state. I will fight to the end for the interests of citizens.

- We will conduct social actions to support ordinary people who need help. Every week we will be in the villages and regions of the country together with our citizens.

- At the next election, the socialists will get a parliamentary majority.

Everything that does not knock us down makes us stronger. Contrary to all their efforts, they will suffer a crushing defeat in the final.