Ukraine between the "European dream" and the reality of depopulation

October 25 2017
24
Not so long ago, the former Minister of Foreign Affairs of Sweden, Carl Bildt, wrote on his Twitter a new picture of “common Europe”: “Over a million Poles are working in the UK. More than a million Ukrainians work in Poland. ” Leading the Swedish Foreign Ministry, Bildt was one of those European politicians who actively supported both the Ukrainian Maidan itself and the coup d'état in Ukraine. In the hotter time of those events, the Swedish minister was not once in K 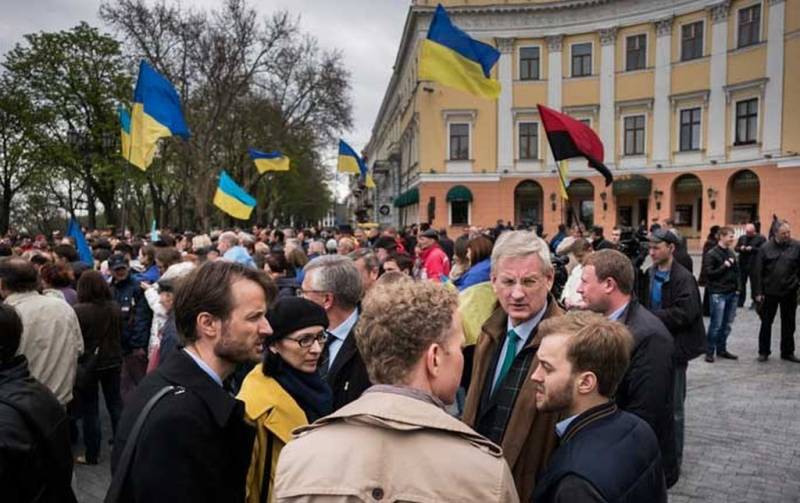 Carl Bildt at the Right Sector rally in Odessa, 2014 year

The speech of Carl Bildt at that conference (he called Kiev for democracy, reforms, European cooperation and warned against establishing relations with Moscow) was very much remembered by the new Ukrainian government. Then, after the resignation of Prime Minister Arseniy Yatsenyuk, a Swede, by that time already unemployed, in the administration of Poroshenko was seriously considered as a candidate for the post of head of the Ukrainian government.

The Ukrainian site Glavkom, who wrote about these plans of Petro Poroshenko, incidentally noted that Bildt has his own vision of the future of Ukraine. For example, at the aforementioned conference, the Swede cited the Ukrainians as an example to emulate Poland, “having achieved success in the European market”. However, the appointment of Bildt did not take place. Experts believe that the Americans have said their word here.

In the United States about the Swedish policy has developed not the most favorable opinion. In the secret diplomatic correspondence published by WikiLeaks, Americans note Bildt’s “limited diplomatic skills” and compare him to a “medium-sized dog with large habits.” Apparently, this quality again leapt into retired politics and prompted him to post on Twitter.

However, this post did not cause the reaction in Ukraine that Carl Bildt apparently hoped for. Instead of puppy joy from the opportunity to go to work in Poland, Ukrainian political analysts thought about how to close the needs of their own labor market. Reflections turned out to be sad.

“Poverty pushes people abroad,” political scientist Andrei Zolotarev said sadly on the 112 channel. He noted the new Ukrainian trend, “if a husband or wife went to“ zero ”to work, now they are leaving by families ...” Dmitry Kovalevich described this in reality in the Ukraina.ru publication.

Kovalevich spoke about the situation in the small regional center of Cherkasy. The city is flooded with free ads, starting with the phrase "I will sell in connection with the departure." Citing data from local agencies, the author notes that the proposals for the sale of real estate in 10-12 times the demand. People don't leave. They really run.

The main reason lies on the surface: "The level of salaries offered by private entrepreneurs and public services (3200-5000 hryvnia) does not allow even more or less to exist, to pay utilities, not to mention the possibility of renting housing."

It is worth noting that the existing price tag on the labor market was formed not only because of the current economic conditions. Wage growth in Ukraine is constrained by the active intervention of the International Monetary Fund. It is known, in particular, the public opinion of the First Deputy Managing Director of the IMF, David Lipton, that the increase in wages in Ukraine "will affect the profitability and competitiveness."

The authorities accepted this as an unconditional guide to action. As a result, Ukrainians rushed out of the country to provide themselves and their families with funds. A local political analyst, Taras Berezovets, wrote on his Facebook page that, because of low wages at home, about 12 million of Ukrainian citizens work abroad.

Berezovets refers to his sources in the cabinet and decrypts the above figure. According to the political scientist, 3 − 3,5 million. Ukrainians go to work in Russia, about 7 million work in the European Union, another 2 million work in the United States and Asian countries. At the same time, “if before, mostly residents of western Ukraine went to work, now residents of the southern regions of Ukraine also went to migrant workers”.

Cherkasy, as we know, is not at all the west and not the south, but the center of the country itself. Previously, he himself was the attraction of migrants from depressed rural areas. Now the city, as, indeed, most of the regional centers of Ukraine, is experiencing an acute shortage of labor, especially professionally trained personnel.

This is a new postmaid reality. In previous years, the provincial district and regional centers of Ukraine in connection with the shutdown of large industrial enterprises faced with a relatively high level of unemployment. Now employers are complaining about a critical shortage of staff.

Moreover, it is not only about qualified engineering and working personnel. (According to the Cherkassy Regional Employment Center, “two thirds of those who officially left last year to earn money have a higher or vocational education.”) Electricians, porters, waitresses, salespeople, commodity specialists, cashiers, office managers are required. There seems to be no end to this list.

Going to work abroad with whole families identified another problem. The inflow of currency into the country from migrant workers has decreased, and quite significantly. Experts give the following example: in the past, mini-beads with people going home for a trip were carrying an average of 30-40 thousand euros. Now ten times less - 3-4 thousands of euros. People began to spend money where they earn.

Moreover, many are not going to return to Ukraine. They link their future with the states of their current stay. Such sentiments are fueled by countries interested in the Ukrainian labor force - the same Poland. There, now for a modest fee or not at all (often - with the payment of a student scholarship) you can get an education in demand in Europe.

About this in Ukraine, they know and react accordingly. The results of a survey published last week by the sociological group Rating revealed that 35% of Ukrainian citizens would like to leave the country for good. This is 5% more than last year’s measurements of public sentiment.

Sociologists state that in the 18-35-year-old age group, emigration aspirations have reached the level of 54 percent. Older people have a desire to break away from the lived-in place less (19%). But for the most part (70% of respondents) they want their children and grandchildren to go to work or study abroad.

The picture is sad. Instead of realizing their “European dream” in their homeland, the disappointed Ukrainians are now looking for happiness abroad. Sociologists and political scientists who are not connected with the Kiev authorities paint a bleak future for their country. Not only is Ukraine gradually turning into the place of residence of pensioners, it is also threatened by real depopulation.

“For our demographics, with the difference between fertility and mortality, the outflow of people abroad is a tremendous danger to the country,” political scientist Andrey Zolotarev is convinced. “We can restore the plants, open up new production, but if we lose human capital, it will be a catastrophic loss for the country.”

It is curious that the change of the situation for the better, local experts do not associate with the recovery of the economy or socio-political environment, but with a purely mechanical replenishment of the population due to migrants from other, even more depressed countries. Taras Berezovets, for example, proposes to import workers from CIS countries and Southeast Asia.

A political scientist calls this measure not popular - probably, with an eye on the Ukrainian nationalists, who mounted power in Kiev. And maybe because the reliance on people of a different culture and faith brought confusion even to the prosperous society of old Europe, what can we say about Ukraine, torn apart by civil conflict.

Kiev economists have their doubts. First, over the years of Maidan’s authority, Ukraine’s gross per capita income fell to 8300 dollars. This is significantly less than in the CIS countries with skilled labor - Belarus, Kazakhstan, and the countries of the Transcaucasus. Secondly, citizens from Central Asia who are not in the above list are quite in demand in the better-off Russian labor market.

It turns out almost hopeless for the country situation. Its hopelessness is exacerbated by the lack of a serious state policy. In Kiev, now is not up to such concerns as the future of the Ukrainian state. Today, the priority of local politicians is not a public good, but a personal condition. They share power and money. And there’s no end in sight ...

Ctrl Enter
Noticed a mistake Highlight text and press. Ctrl + Enter
We are
Poltava. The nail in the coffin of the Swedish stateResults of the week. "Whose will you be?" Whose serf, I ask? "
24 comments
Information
Dear reader, to leave comments on the publication, you must to register.