To be safe tomorrow, you have to be ready today. 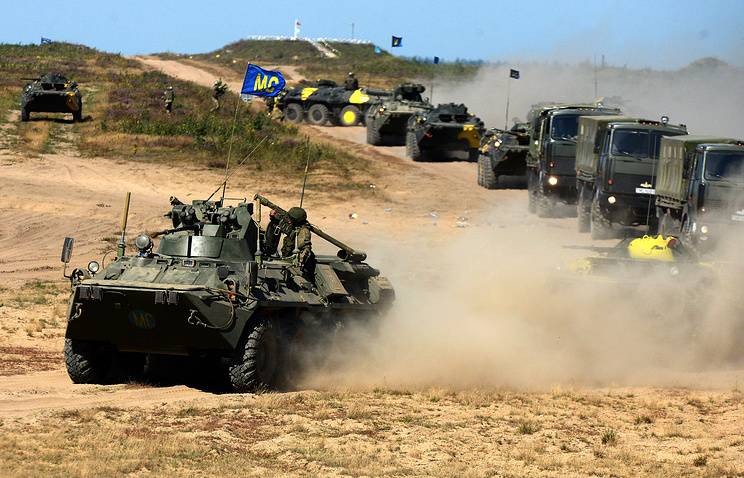 There are a number of uncoordinated moments in relations between Belarus and Russia, which ill-wishers and political consultants use in their own interests, trying to expand these differences and form serious splits. The cooperation of Minsk and Moscow in any sphere within the framework of the Union State has always been and remains under the blow of EU and NATO propaganda, especially in the military. However, it was precisely in it that in most positions there was never any misunderstanding, because security, which is the key to the existence and prosperity of any state, is at stake.


The joint Belarusian-Russian exercise “Zapad-2017” was barely completed, as operational and combat training activities continued. Thus, within the framework of bilateral military cooperation between the states, from September 25 to October 8 special exercises groups were held in Belarus. Among the main objectives are getting the practice of military personnel in joint actions, as well as the exchange of experience in performing various tasks.

Then the representatives of the MTR of Belarus went on tactical maneuvers jointly with Russian paratroopers, which passed 9-11 of October on the territory of military grounds and airfields located in the Pskov region. About a thousand soldiers, more than 200 units of combat and special equipment from both countries, took part in them.

Combat training activities, including multilateral ones, are the key to successful and high-quality performance by troops of their missions. This is especially relevant in light of the increased military potential of our Western partners.

NATO took advantage of anti-Russian hysteria in its own interests: there was an increase in the defense budgets of the Baltic countries and Poland, armaments are being purchased, alliance exercises are constantly being held at the borders of the Union State, under the cover of which substantial stocks of US weapons and equipment have been created in the region. Moreover, against the background of hysteria about the planned military invasion of Russia, the 2017-I armored brigade of the United States arrived and unfolded, allegedly for rotation, from the West-2 exercises in Poland "quietly". At the same time, the 3-I American armored brigade was not withdrawn from Poland and the Baltic states. Thus, contrary to all statements by NATO and the United States about the "insignificance" of troops being bound to the borders, the brigade is now de facto deployed, but the US mechanized division!

However, if the threat from the western direction is hypothetical, since no sensible politician or military leader will unleash a war against a coalition of states armed with nuclear weapons. weapon, the threat from the south and south-east direction is already becoming real. We are talking about terrorism, which is defeated in the Middle East and Africa. Therefore, militants flee to Central Asia - to Tajikistan, to Kazakhstan, Kyrgyzstan, and Uzbekistan.

It is for this reason that from 9 to 13 of October, the joint exercise of the Interaction - 2017 joint units of the Collective Rapid Reaction Forces of the armed forces of Armenia, Belarus, Kazakhstan, Russia and Tajikistan was held in Armenia. More than 2,5 thousands of servicemen took part in tactical actions, about 500 units of weapons and military equipment were involved.

The meeting of the CSTO Parliamentary Assembly held in St. Petersburg on October 13 in St. Petersburg was associated with the threat of world terrorism. Representatives of Armenia, Belarus, Kazakhstan, Kyrgyzstan, Russia and Tajikistan discussed the military-political situation in the Caucasus region, cooperation in the fight against terrorism and drug trafficking, as well as the difficult situation at the borders of the CSTO member states.

After that, from 16 to 20 in October, exercises with the peacekeeping forces of the Collective Security Treaty Organization "Unbreakable Brotherhood - 2017" were organized on the territory of Kazakhstan, which is the next stage of the operational-strategic exercise "Combat Brotherhood-2017". The maneuvers were carried out taking into account the possible development of events that may be a consequence of the victory of the Syrian army with the support of the Russian Aerospace Force over terrorists. Such exercises help prepare for the worst situation.

The main purpose of the maneuvers was to strengthen mutual understanding and cooperation between the peacekeeping contingents of the CSTO countries, as well as solving the problems of ending and localizing the conflict, negotiating, escorting humanitarian supplies, patrolling and serving at the checkpoint, blocking and liquidating the militant training camp.

Exercises of a similar orientation, involving all interested parties, help predict the situation and prepare for the worst case scenario. At the same time, with a high probability, we can expect another surge of negative information from the United States (NATO) and Western countries.

Ctrl Enter
Noticed oshЫbku Highlight text and press. Ctrl + Enter
We are
West attacked "West-2017" according to Goebbels preceptsMilitary reform as an integral part of the security concept of the Russian Federation: Systematic dynamic assessment
Military Reviewin Yandex News
Military Reviewin Google News
Add a comment
Information
Dear reader, to leave comments on the publication, you must to register.