October 25 2017
30
About how the Russian army will pierce the "defense capability" of NATO, despite the adoption by the Alliance of measures to "strengthen deterrence", the so-called secret report says. The document surfaced in the German press. 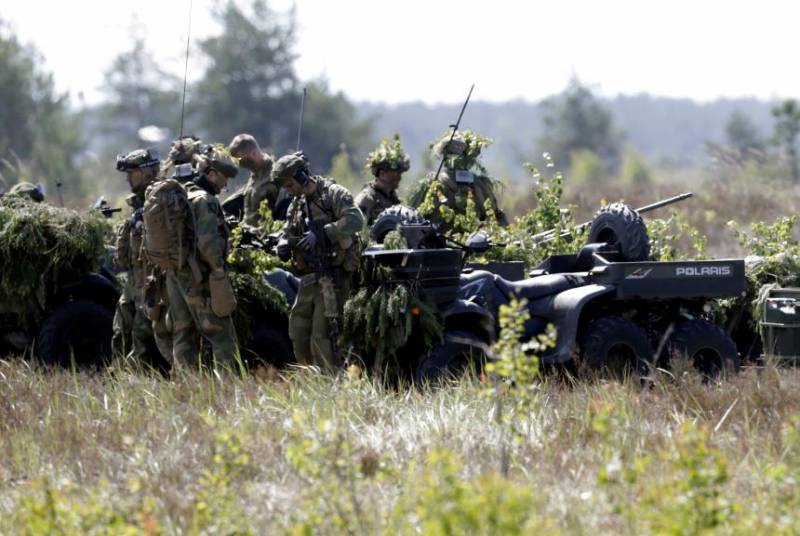 NATO will not be able to repel a strike by the Russian army if it undertakes an offensive against Eastern Europe. This is stated in a secret document called “Fortschrittsbericht über das verstärkte Abschreckungs- und Verteidigungsdispositiv der Allianz” (him), which means “Report on enhanced deterrence and defense capability of the alliance”. The secret document was edited by the German Spiegel. How did he get there? Probably Putin threw up.

If we forget about the jokes, then the press has another and almost official confirmation that NATO does not believe in the possibility of the alliance states to protect themselves. From whom? All from the same Russian, who do not attack.

The “Secret Report” challenges the ability of NATO to protect itself, according to a German publication.

What to do if Russia attacks any NATO country? The Alliance will not be able to cope with the enemy in a military conflict. According to Spiegel, this conclusion was made by experts who compiled the secret NATO report.

The Brussels report notes that the alliance is not able to "prevent an attack from Russia." This is due to the fact that the structure of the alliance command is outdated since the Cold War.

The authors of the classified NATO document directly write: "You can not even rely on the rapid reaction force." At present, work is under way to clarify the areas of responsibility of the NATO commander in Europe, but to this day “there is not enough confidence that even the operational forces of NATO will be able to quickly respond if necessary.”

Alliance states, primarily the Baltic republics and the Scandinavian countries, feel “threatened by Russia,” later indicated in the journal. These countries urge the alliance to eliminate the shortage of power as soon as possible.

“We know that it is necessary to adapt and modernize the alliance and its command structures,” the Norwegian Defense Minister told Spiegel.

The new structure should support NATO in “vulnerable regions, such as the Baltic states,” echoes R. Karoblis from Lithuania.

Danish Minister K. H. Frederiksen argues that "Russia is violating international law," and NATO needs to revise its structures. However, this politician is prone to optimism regarding the alliance: "NATO is the strongest defense alliance in the world, because for more than seventy years it has been constantly adapting to new challenges."

The main reasons for the degradation of NATO, according to a secret document, are the lack of efficiency in responding to challenges, weaknesses in overseas and local logistics (special emphasis is placed on the lack of bridges and crossings for heavy equipment) and the inadequacy of headquarters personnel.

The following incident is pointed out: the expensive military equipment that the alliance has may simply turn out to be a mountain of useless rubbish, because the military will not be able to deliver “insanely expensive combat systems” to the necessary territory.

As the RIA News", NATO spokesman Oana Lungescu refused to both confirm and refute the information of the German edition. Like Mr. Frederiksen, she is optimistic and insists that "alliance forces are on alert and can redeploy much faster than ever."

What do Russian politicians and experts think about the report that suddenly appeared in the European press?

“I want to repeat once again that Russia was not an aggressor and never will be. But at the same time we, unfortunately, see the concentration of forces and means on the western direction from the countries of NATO and the USA, which is unacceptable. Taking this into account, we pay even more attention to strengthening our defense potential, which, of course, is able, if necessary, to adequately respond to existing threats. ”

Andrei Manoilo, doctor of political sciences, professor of Moscow State University, member of the scientific council at the Security Council of the Russian Federation, said "Free Press"that behind the relevant publications is a specific goal - to promote the introduction of "military Schengen." This topic was raised by Dalia Grybauskaite, the President of Lithuania. According to Grybauskaite, who spoke on October 19 at the EU summit, the issue of the simplified movement of NATO military equipment between European countries should be resolved.

In Russia, the first deputy chairman of the Federation Council Committee on Defense and Security, Franz Klintsevich, responded to this statement. According to him, such an initiative would turn Lithuania into a springboard for attacking the North Atlantic Alliance against Russia.

A. Manoilo does not think that NATO actually has major problems with the deployment of troops and prompt response to threats. “I don’t think that now NATO does have big problems with the deployment of troops and rapid response,” he told the publication. - The reason for the appearance of such publications is that the alliance wants to create a kind of military Schengen, but a number of countries strongly oppose this. Without this “military Schengen”, today the inconvenience arises when NATO contingents are transferred from one country to another, because the military must issue individual visas. ”

Hence the publication that NATO will not be able to protect its eastern frontier: the initiative on the military Schengen is being pressed through at the legislative level: “They say that while the military waits for a visa to the same Baltic states, Russia will wipe it off the face of the earth. This is a purely psychological measure of influence on the political elites and the population of those countries that are on the eastern borders of NATO. Everything is simple, like a penny. "

As to the difficulties with the operational deployment of the alliance, the expert recalled that in the Baltic States, NATO just already contains a large number of military warehouses, where “an enormous amount of equipment, small weapons, ammunition. And in the case of the threat of weapons near Tallinn, “enough for a full-fledged rifle corps.” The same thing is in Lithuania and Latvia: having a living force, the NATO members will place guns in each country under the gun. There remains only the question of transfer. And here, NATO members "would like their fighters to be able to walk around Europe without difficulty, regardless of borders, instead of all documents showing a sewn chevron."

“A number of countries, as I said, are opposed to this. Not because they have something against NATO. They just reasonably suspect that if NATO members are given a military Schengen, not only will they roam unhindered across Europe, they can cover up this colossal smuggling on their overlooked trucks, and are not ready for this in many countries. ”

Expert opinion seems to be quite reasonable. Following the transatlantic course of Trump's hawk, a big fan of Reagan, European hardliners are inventing new methods to “contain” Russia and turn Europe into a natural military camp and the patrimony of NATO. The patrimony of the alliance, in which Washington sets the tone.

With the arrival of Trump, the military component in European politics is only increasing: the overseas president not only enforces the doctrine of Obama's predecessor, who, despite budget cuts, decided to increase the number of military forces in Europe, but also unleash an arms race, which will be paid by European Union. The reason for militarizing Europe is the same one that was involved during the USSR: “the Russian threat”.

Observed and commented on Oleg Chuvakin
- especially for topwar.ru
Ctrl Enter
Noticed a mistake Highlight text and press. Ctrl + Enter
We are
Situational analysis of the death of the MH17 flight (Malaysian Boeing 777), made on the basis of engineering analysis from 15.08.2014Results of the week. “In our cooperative, the board is always agreed”
30 comments
Information
Dear reader, to leave comments on the publication, you must to register.