Russian method to ensure a cease-fire in the Donbass 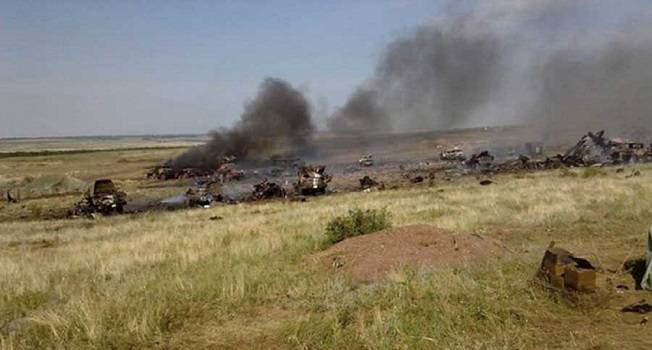 - I gathered you to make an important statement. - Poroshenko took a serious look at the invited journalists.
- Today I had telephone conversations with the presidents of the United States, France, the German Chancellor, the British Prime Minister, the President of the European Union and the top officials of several other European states. We came to a unanimous decision. We give the aggressor and the terrorists supported by him exactly 24 hours to peace come to the long-suffering Ukrainian land. The civilized world will no longer tolerate in the Donbas not only that of an artillery volley, but also a shot from a rifle. Enough! 24 hours, and not a minute more!
The Western journalists who jumped up from their seats happily applauded.

With a sigh, Putin put the phone down.
- What, bad thing, Vladimir Vladimirovich? - Lavrov asked sympathetically.
- Davit bitch.
“Americans are all of them,” Shoigu said grimly.
- Maybe it cost him to say what he owes us? Well, at least hint? - asked Bortnikov.
“No,” Putin answered, “let him know nothing, he will sleep better.”

The phone on the table cracked. Putin looked at the device in disgust:
- Merkel. How to drink to give it to her.
“Send her, like Macron, and of all business,” Lavrov chuckled.
“I can't,” Putin sighed, “nevertheless frau,” and took the phone.
- Guten Morgen, Valdemar! As a representative of the world community, I demand that you immediately stop this cruel bloodshed in the Donbas!
- Mrs. Merkel, well, what have I got here ?! What does Russia have to do with it ?! The fighting is between the Armed Forces of Ukraine and the militia of Donbass. I might as well demand that you stop the civil war somewhere in Africa!
- Waldemar, do not pretend. We both know that if you just call these bandits, everything will be decided. So pick up the phone and call! You have only 24 hours!

Putin put the phone down:
- Overlaid from all sides, bastards. Apparently, you have to call Zakharchenko.
He pressed a few buttons on the phone:
- Aleksandr Vladimirovich. Putin I will not say anything. Squeezed us still. Everything. After 24 hours there should be no more artillery volley, not a single shot. You have the power to solve the problem?
- Sure, not a problem! So you can, yes?
- It is possible.

An artillery officer with a chevron of the armed forces of the New Russia on his sleeve, took the walkie-talkie off his ear, put it in his pocket, straightened up and crossed himself:
- Well, thank God, waited. Charge! Runaway, fire!
The shells were torn one by one. Machine-gun points flew into logs, twisted guns turned over, burned Tanks. The technique, beaten by soldiers, growled strainedly from this hell.
- Shvydche, shvydche! Drive on - They beat the driver in the back, but he squeezed everything out of the combat vehicle and even more.

This VSU carried out the withdrawal of military equipment according to the second paragraph of the Minsk agreements.

Melodically, he perused the phone, Merkel picked up the phone:
- This is Putin. As I was just informed, not only heavy but also light weapons were withdrawn from the line of contact, combat units were redeployed deep to the rear and for 10 hours along the entire front line calm and silence. Dead silence.
“You see, Valdemar,” Merkel said instructively, “you can, whenever you want!”
“We can, we can,” Putin agreed.

Ctrl Enter
Noticed a mistake Highlight text and press. Ctrl + Enter
We are
"Points" over ÜHow to arrange a nuclear armageddon
36 comments
Information
Dear reader, to leave comments on the publication, you must to register.