Former NATO soldier told why now fighting for the NPT

October 24 2017
59
Correspondent NewsFront Ekaterina Katina interviewed one of the fighters of the army of the Donetsk People's Republic. The fighter has not Donetsk roots at all. He is a subject of the Netherlands, at one time a military man of one of the NATO military units. The man was in the Donbas, arriving from the Dutch city of Axel.


From the interview:
15 years ago I left NATO. I got kicked out. I began to think why NATO is everywhere. We then stood in Bosnia, and I thought, but why are we here, the country is torn to pieces. And during these fifteen years we have seen many similar situations that occurred in Libya, Syria, Iraq. Not everything is identical, but everywhere the war began with a lie. And people said: “Yes, he is a dictator, a bad person. And our political leaders do a lot of what they do ... it's good, we will pay for it. ” They do it everywhere, without any permission, just for enrichment. This is not just our political leaders, big business is behind them. This was during the Second World War.
After the war, we created NATO. Now the same thing happens, if you look at the statistics, a lot of people were killed in the wars unleashed by the lies of the West. Over the past fifteen years, the number of victims has already reached the number of times of the Second World War. This is a form of fascism. There are various forms of it, for example, when people wear symbolism, as is done here, on that side. For me it was a motivation - I do not want to live in a society governed by fascism. Fascism is not visible in us, in France, Belgium, Germany, it is not visible, because it is hidden ... In the West, we pay Kiev, and they start a war with "terrorists." I don't know who they call terrorists here. Here people live, three kilometers from here. Here you are from here, you are not a terrorist. People here are just protecting their homes. And there, on the other side, people wearing the symbols of "Wolf hook", "Dead head". In the West, we support this regime. Governments support. There is a hidden fascism, there are different forms of it, in my opinion. All this was the impetus that I decided to get away from it all. 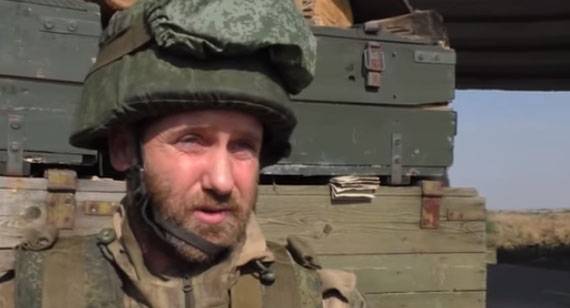 A man, whose name is not called, said that the Donbas is very friendly and friendly people. According to the Dutchman, he would very much like to get to the European man in the street not distorted by the Western media, but objective information about what is happening in the Donbas, in Ukraine. According to him, the overwhelming majority of Europeans are simply not familiar with Donbass realities.

Fighter DNI:
I would like to tell them (Europeans) that if they want to know what is happening here, they have to overcome their laziness and use the computer to find information and not trust the media, because the Western media is complete nonsense. If you want to find information, you will find it, because we do not live in the Bronze Age, but in the era of technology, the era of information.