October 25 2017
96
This article is in addition to the article posted earlier on the site: https://topwar.ru/81212-dostoynyy-uchenik-kutuzova.html. 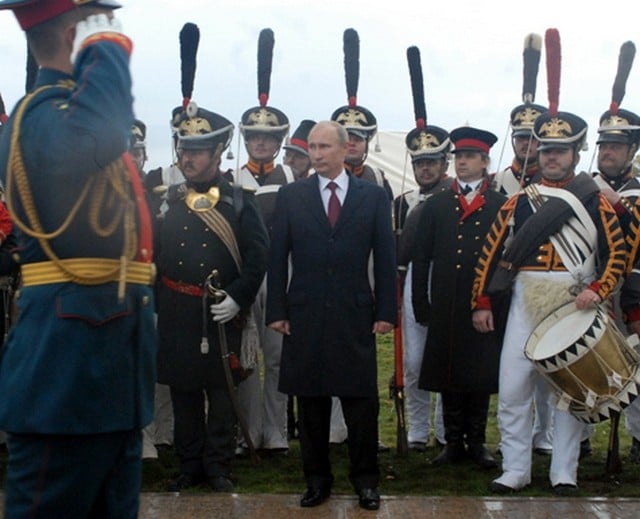 The wars of the times of Napoleon were completely different. The soldiers were in bright outfit, and it was easy to get into them. Fought by the rules. We walked in dense rows under the drumbeat. This detail essentially gave determination to the fighters. By the way, when in the war with the Boers, the British first dressed their soldiers in camouflage, they condemned it. It would seem a minor detail: the color, and what was the effect! Losses have decreased many times. True, then this positive statistics spoiled the machine gun. Minor changes in the layout of parts have increased the rate of fire many times. This allowed even to suggest that there would be no more wars. It was argued by a high rate of fire and, accordingly, mortality. I am sure that at the heart of subsequent wars, you can again find "innocent" details. Here about them also the speech will go.

Napoleon, Kutuzov and Putin. Should not discuss personality. The essence of the ideas, analogies and details.

The French army was huge, more than 500 thousands of fighters. Napoleon's genius was even greater. In Europe, craven Europeans immediately carried him out the “golden key,” that is, the keys to the capitals. And here is the first bummer (from Peter I). In Russia, as it turned out, the two capitals. Disorder! Where to go? Here the genius of Napoleon was powerless. I had to split the army. And since there are no two geniuses in the same army, the half that went to Petersburg sank ingloriously in the marshes. And that which didn’t drown was broken 20.07.1812 under Klyastitsami. The first conclusion: Russia is not for weaklings and mediocre attackers. This is a heartland, an impregnable natural fortress. “There is no such army that can occupy it” (H. Mackinder). But it can be deceived, what our enemies did then, they do now. The second conclusion: military paradigms in these territories always work. It is difficult to predict the consequences for Moscow in the Second World War 1941-45, don’t pull Leningrad into the heavy forces of Hitler’s troops ...

Have you ever seen a French horse horseshoe of that time? He knew that he had not seen! With such a horseshoe to fight in Russia is utopia. It does not work. Here there are rain, snow, mud and at the same time there are no roads, and the horseshoe is flat and without spikes! Trifle, detail, and we are pleased. Usually in Europe, four horses were pulling a cannon. In Russia, "usually" does not pass. The six could hardly cope, the horses just fell! This was the main headache of Napoleon.

Further more. As you know, the dirt on the roads of Napoleon's army was kneaded again. He was forced to return by the same route. There were problems with food and hay. The peasants hid food and burnt hay. Again detail. Horses with flat horseshoes very quickly bent from overstrain. Food was bad. But the French found a brilliant solution: they finished off the horses and ate their meat. This kind of "genius" in Russia also does not pass. Again detail. The French grew up in exquisite French cuisine. In this situation, they had to cook their own food. And since the Russian army and D. Davydov were constantly bothering them, they had to break halts spontaneously and only in the evening or at night. Horse meat had to be cooked in the dark at the stake. And here it is ridiculous: a small, but the main detail in a million. Since the French were excellent soldiers, but useless cooks, they did not remove the PENCU when they cooked horse meat. Yes, and not to foam them. Hungry fighters thought that foam was a fat. But no. Foam is poison! Especially when it comes to horse "diet." Healthy legs and joints during retreat is perhaps the main condition for survival. Soldiers started to refuse joints. Of course, nobody knew these subtleties and very few people knew. Napoleon did not recognize his barely wandering army. His constant question, “What happened to my eagles?” Remained unanswered.

October and November are not the coldest months to retreat. Yes, there were low temperatures, but there were also thaws. But what was good enough from the remaining warriors to the crossing at Studenka could no longer be called an army. Napoleon counted everything except details in the form of horseshoes and foam. Agree annoyingly. And most importantly, what a field for criticism of this person!

Now about Kutuzov. He "accompanied" Napoleon's wandering army and often scolded Davydov for his excessive assertiveness. Further imagine the 1812 path of the year. The only road, and that no (asphalt came up later). After Smolensk, to take care of Napoleon’s army was not difficult at all. Step to the left, step to the right - swamp and icy rivers, streams, streams, bridges ...

Back to the details. The bridges then in Russia, as a rule, were narrow (one carriage), wooden, one way, the speed of the retreating troops no. Imagine an eleven-kilometer demoralized army. The flying detachments of D. Davydov, as it seemed to the French, were everywhere. It was their nightmare. But the main part was the match. Million question. Why would Kutuzov not give the order to burn all those bridges to the fucking mother? So what? And everything, the army costs. Horses are sorely lacking, they are confiscated by Napoleon’s firing orders, even among the highest ranks for artillery needs. After Orsha, Tolochin, Beaver under the gun harness up to eight, ten exhausted horses. Soldiers are exhausted by disease, hunger and endless expanses. Burn all the bridges in the path of retreat - that's all, finish. Maybe Kutuzov was "sent by a Cossack"? Or maybe he was stupid? This means that the field for his criticism is simply huge. But do not rush, look for details.

Back in modernity, to you, Putin and details. Together with perestroika, general computerization, freedom and Pepsi-Cola, we received a “free” bonus, i.e., details. We were above popular wisdom, saying that free cheese is only in a mousetrap. Details turned out to be a million. Soon there will be thirty years, as we (regardless of our will) are engaged in toxic trainings. Toxicity is expressed in the hypertrophic self-identity, that is, the ego. As a result, we are all absolutely sure that we are right. Why are there in the right, in his own genius! Remember: "I am the most charming and attractive," "I deserve it," "Take everything from life," and so on. And what? And nothing. The thirty-year result of this “innocent” detail, i.e. trainings, remarkably characterizes the growing slogan: “I hate to think ...” Genius is rarely outrageous, talent is only in personal imagination, the brain decreases quantitatively and most importantly, qualitatively (scientific fact), life is saturated, but ... beer!

Show specifically nothing. Life was not entirely successful, but we were taught to blame everyone but myself for this. We have a lot of problems and, of course, Putin is personally to blame for them, and yet he has not lost a single battle yet. Details - his horse. Feel the difference ... But we are famously reaching for the keyboard in order to criticize everyone on the Internet in full confidence that we are better. Much better! Why? Because it is easy to discuss personalities. Because for the conduct of other analysts need brains. You will say that this is all the details. Yes, horseshoe, foam, matches - these are the details, but because of them they lose the war. Our life consists of details and wars, they are just smaller in size. Do not lose to you ...

PS Nothing personal, only in order of explanation. For clever commentators. Smart people discuss ideas. Ordinary - discuss events. Mediocrity discuss (and go to) personality. Choose what type you are, what pulls you more.

Ctrl Enter
Noticed a mistake Highlight text and press. Ctrl + Enter
We are
A great interview with Sergey Lavrov: about Ukraine, Obama and IranWhat you didn't want to know about England
96 comments
Information
Dear reader, to leave comments on the publication, you must to register.