October 24 2017
32
At the beginning of the last decade, mass production of large-caliber machine gun “KORD” was launched. Soon the army ordered several options for this. weapons in different versions and with different options. Over the next years, the designers did not abandon the development of the existing project, as a result of which new modifications of the base machine gun appeared. This year, Kovrov Plant them. Degtyarev introduced three new versions of such weapons.


Recall machine gun "CORD" was developed in the city of Kovrov as a replacement for the existing NSV system. The project proposed a machine gun chambered for 12,7x108 mm, using a gas engine with a long piston stroke. Locking barrel by turning the shutter. Ammunition served in a machine gun with a metal tape. An air-cooled barrel was used, the fastenings of which ensure its quick replacement. Developed trigger mechanism with manual or remote electric control. 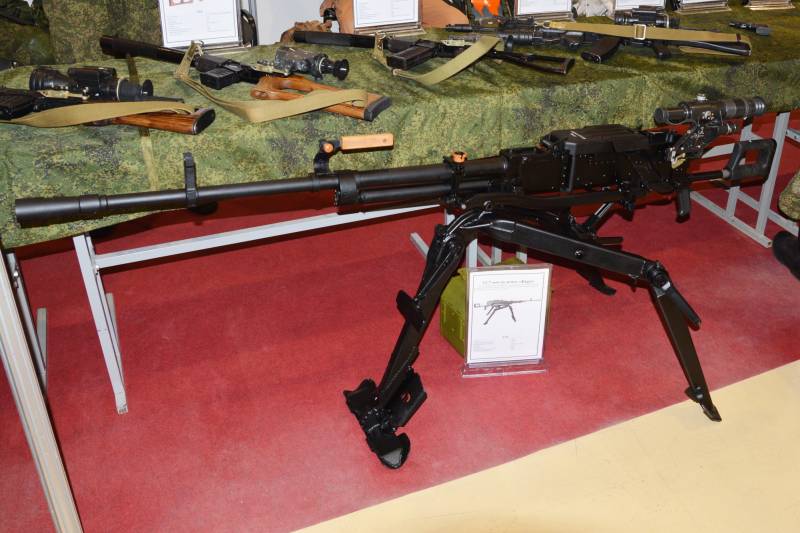 At the expense of those or other design improvements, as well as with the help of certain additional devices, the KORD machine gun can be used for various purposes and in various configurations. To date, seven variants of these weapons have been created and put into the series at once. The base for the family is a machine gun 6P50 - infantry weapons on the machine-tripod 6Т7. There is also a version of the machine gun on another machine similar purpose. Of particular interest is the product 6P50-1 or 6P57 - in this form, "CORD" is equipped with a bipod, which makes it stand out against other large-caliber machine guns.

For armored vehicles are several other modifications of the machine gun. Products 6P49 and 6P51 are a basic machine gun equipped with an electric trigger. Such weapons can be used on machine gun installations of existing tanks or as a paired weapon. The 6P49 machine gun has a right-handed ammunition, 6P51 takes cartridges on the left. Machine guns 6P58 and 6P59 are proposed to be used with pivot mounts of various equipment.

The proposed nomenclature of modifications of the machine gun "CORD", in general, meets the needs of the armed forces. Nevertheless, new types of military equipment are emerging and original ideas are being expressed, which is why gunsmith designers have to return to design again. All this leads to the expansion of the range of modifications of the base sample.

This year, the plant them. Degtyareva participated in several military-technical exhibitions, during which he showed his new developments. The venues for the first demonstrations of promising weapons, including the CORD family, were the MAKS-2017 international aerospace show and the Army-2017 military-technical forum. In addition to the seven existing modifications of the machine gun, three more versions of it for various purposes were developed.

During the Army-2017 forum, the Ministry of Defense signed a contract for the serial production of the upgraded T-90M tanks. One of the differences of such a combat vehicle from the previous models is the new remotely controlled combat module located near the commander's hatch. On this system it is proposed to mount a large-caliber machine gun of the CORD family. As it became known later, in this case we are talking about a new modification of such weapons.

For installation on promising tanks offered machine gun 6P49MT "CORD-MT." This product was developed in the framework of experimental design work "Breakthrough-3-CORD" and was originally intended for use on tanks. Operation with remote-controlled installation imposes special requirements on the machine gun. Taking into account the peculiarities of such use, a new modification of serial weapons was created, having a number of important possibilities.

According to published data, the product 6P49MT is a modified version of the CORD tank machine gun, equipped with an electric lowering. By using together with the combat module, which has its own aiming drives, and also, possibly, with the help of some modifications of the weapon itself, a certain increase in the accuracy of the fire is achieved. In addition, with the help of new remote control systems, the tankman can change the rate of fire. It is assumed that the combat module with a large-caliber machine gun will allow the tank to maintain the required firepower, but at the same time it will reduce the risks for its crew.

It is known that in the spring of this year the machine gun "KORD-MT" passed preliminary tests. At present, the development organization and the military department are conducting state tests of weapons installed on a regular carrier. In addition, the availability of an order for the serial production of such machine guns is reported. The first batch of 6P49MT products can be handed over to the customer next year. 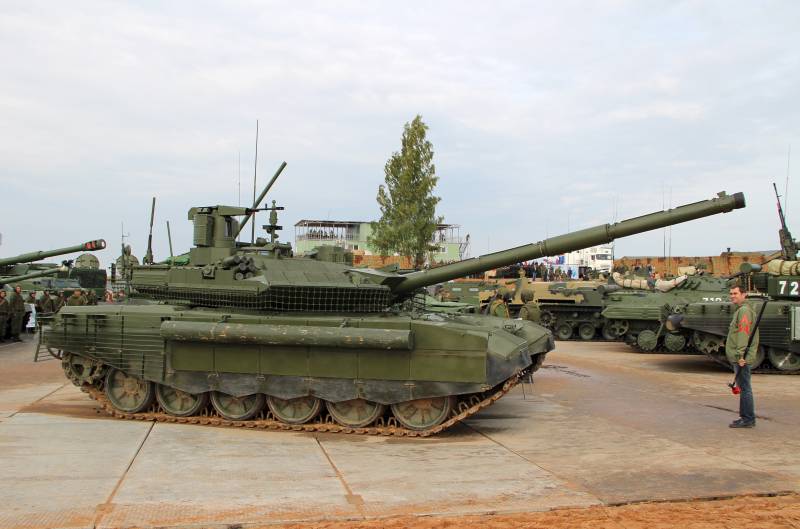 The first carrier of machine guns 6P49MT should be the main tank T-90M. At the same time, weapons with new capabilities may be of interest in the context of other armored vehicles. The combat module with such a machine gun can be used on armored vehicles, armored personnel carriers and other vehicles of the armed forces.

In addition to the ground forces, aerospace forces showed their interest in specialized modifications of the KORD machine gun. By their order, by now two versions of such weapons have been developed at once, differing in their design and purpose. In both cases, we are talking about increasing firepower and expanding the combat capabilities of various types of helicopters. For obvious reasons, Ulan-Ude was involved in the work on machine guns for the VKS aviation factory building different types of helicopters.

The 6P49В “KORD-V” (“helicopter”) machine gun is a modified version of an infantry weapon adapted for use in aviation. Such a product is intended for installation on installations in the side doors of existing Mi-8 / Mi-17 helicopters. In connection with the specifics of such use, the design of the machine gun was slightly modified, and in addition, it was supplemented with a number of new devices for this or that purpose.

The trigger mechanism of the machine gun "KORD-B" combines manual and electric control. In the latter case, the energy is taken from the on-board network of the helicopter carrier. Also, the machine gun is equipped with a set of sensors that monitor the consumption of ammunition, the position of moving parts and the readiness of the weapon for firing. The receiver is supplemented with a device for removing empty cartridges, and a special collection is placed on the window of ejection of the tape links.

The second "helicopter" version of the machine gun received the designation 6P49T and "CORD-T" ("heat sink"). Unlike the modification with the letter “B”, this weapon is intended for rigid mounting on the carrier and using it as a course one. In accordance with such tasks, a list of major improvements to the base project was determined. In this case, a machine gun with a heatsink differs in the most noticeable way from the unified “KORD-V”.

According to reports, the 6P49T machine gun is proposed to be mounted on Mi-171Sh helicopters using a special container body. Ready machine-gun container with a weapon and a sufficiently large ammunition should be installed on the pylons of the carrier. This allows you to fire into the forward hemisphere, aiming the weapon with the help of the sight in the pilot's cabin. The placement of machine guns outside the inhabited compartments of the corps led to the need for appropriate innovations.

Like the base tank 6P49, the new CORD-T is equipped with an electric descent, providing remote control. In the event of a misfire or a stop in shooting for other reasons, the use of pyrotechnic recharge means is foreseen. The latter are also remotely controlled from the cockpit. Especially for 6P49T, a new barrel was developed, featuring an increased wall thickness. This barrel heats up more slowly, which allows to increase the intensity of shooting. According to published information, CORD-T is capable of making more than 300 shots non-stop for intermediate cooling.

According to the latest data, Plant them. Degtyarev and Ulan-Ude Aviation Plant jointly produced several prototypes of advanced weapons and two types of installations necessary for their use. Not so long ago demonstrated a new weapon installed on the Mi-171Sh helicopter. Whether this weapon was tested on a carrier or separately from it is unknown. One way or another, in the near future it will have to go through all the necessary checks, after which the customer will be able to proceed to the decision on whether to put into service and mass production. 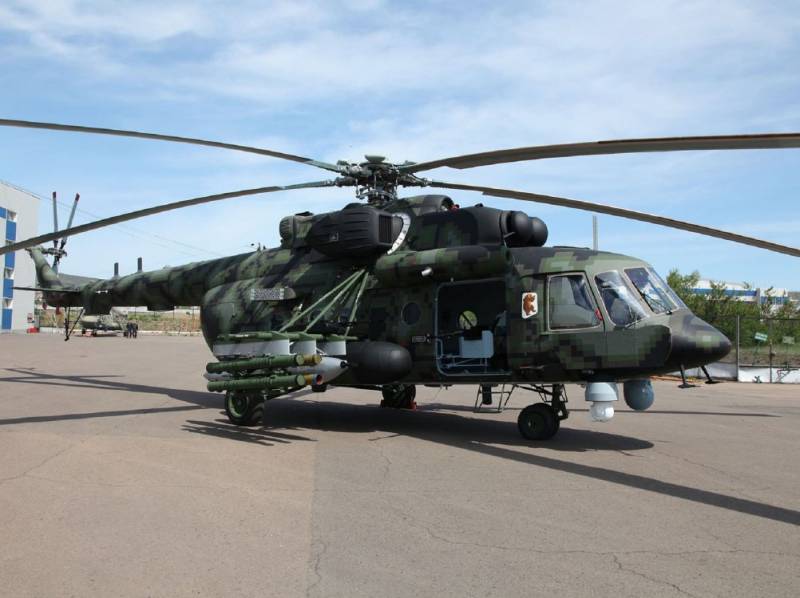 Mi-171Sh helicopter with machine guns "KORD-V" (installed in the side door) and "KORD-T" (mounted on the external hanger above the cannon container). Photo All4shooters.com

It is easy to calculate that after the completion of the current work at the disposal of the armed forces will be just ten modifications of the machine gun "CORD", differing in technical appearance, purpose and type of additional systems. It should be noted that the new product line is designed to complement the existing machine guns to more effectively solve new problems. About the replacement of older samples with new ones.

In the foreseeable future, the KORD family of machine guns will be used in all major areas. Such weapons are already being used most actively by the ground forces and the naval forces. fleet; both in the form of mobile systems, and as easel / pedestal armaments. There are also combat modules for such machine guns, and another development of this kind will soon fall into the troops. Of particular interest in this context are the 6P49T and 6P49V machine guns, which will allow the use of the KORD system in aviation. At the same time, the helicopter’s potential will be increased both in the impact role and in self-defense.

The emergence of three new specialized machine guns should lead to certain consequences associated with the combat capabilities of technology. Thus, T-90M tanks equipped with remotely controlled combat modules will be able to preserve the firepower of additional weapons, but the risks for the crew will be drastically reduced. Helicopters, in turn, will be able to more effectively fire at ground targets from both course and airborne weapons. It should be recalled that the machine gun "KORD-T" differs from other members of its family by the possibility of long-term shooting without interruption.

Machine guns of the 6P49 / 6P50 "CORD" family are gradually becoming the main weapon of their class in the Russian armed forces and are systematically replacing outdated samples. To replace the existing gunners NSV previously created several modifications of the new type. Now we are talking about expanding the range of models produced by products designed to solve new problems. The successful completion of ongoing projects will have to lead to the renovation of the material part of the troops, as well as to the corresponding qualitative changes.