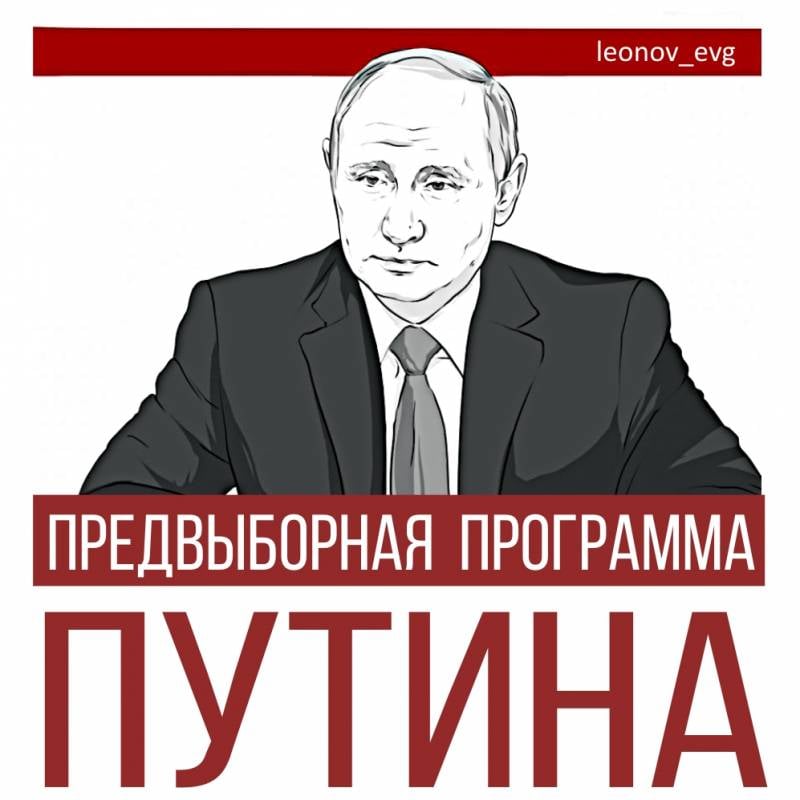 Is Vladimir Vladimirovich going for president? My opinion is yes. In war, horses at the crossing do not change. Even on a feminine horse. But now it is not about candidates for the highest office of the state. Now about the GDP itself. More precisely, about his mission for the next six years. On the "road map", as he likes to say.

Do you think that the current head of state does not need a program and election slogans? Partly yes, but the formalities must be followed. And since the president is a very busy man, I decided to write him an election program. And let it be just a figment of my imagination, I hope some part of what I have written will come true.
So, I propose the following slogan:

“I HAVE HAVE ORDER IN FOREIGN POLICY - STARTING TO GUIDE THE ORDER INSIDE COUNTRIES.”

In my opinion, most people in Russia would approve of a similar concentration of our president on domestic tasks.

And now,
PUTIN'S ELECTION PROGRAM
_______________________
First of all, I would recommend our president to carry out a thorough personnel reshuffle. It's no secret that Putin owes Medvedev, Kudrin and other liberal companies a lot. But going to his last term, he needs to get rid of this, the “elite” division that has bothered the people.

The first thing is to replace the government, dismissing Medvedev, Dvorkovich, Shuvalov. I propose Mikhail Khazin to the place of premiere. The person has experience in leadership positions, he does not belong to any liberal grouping. He has a big baggage of methodological knowledge, and also has been engaged in the theory of economic crisis for many years.

Here it should be noted that, studying the issue of powers and activities of the Central Bank, I came to the conclusion that the main bank of the country is the fourth branch of power, along with the three main branches declared by the Constitution. But formally, his position in the main law is very skillfully veiled. Therefore, Putin should convene a Constitutional Assembly and initiate efforts to change our Constitution. In other words, the Central Bank needs to be nationalized. And since we are talking about amending the Constitution, then the article on the prohibition of state ideology also needs to be abolished.

Another very important note about the activities of the Central Bank: you must certainly do two very important things. The first is to ban making reserves in US government receipts. With the phrase "not very reliable." Who knows when they jerk there? And then where are we with these papers? The second is to ban speculative games with the ruble. It is not good when traders from Chicago sit and roll off the rate of our currency, and the Central Bank silently looks at all this. In the west, the state places bans on such activities. Only in Russia with its liberal gang can you do anything with the ruble.

Too many voices about the inefficiency of our education. I propose Vladimir Vladimirovich to appoint a new minister. In my opinion, Nikolai Starikov fits very well for this role.

Minister of Finance - Sergey Glazyev. I think many will be "for". Here, many may rightly argue, they say, Glazyev was predicted to be prime minister at the time. But since I am writing the “program”, I still “gave” the post of prime minister to Khazin.

Again, it is worth going back to the credit and financial policy, and again to talk about the hated Central Bank and Sberbank. It’s time for this private shop with Gref at the head, first, to start working in the Crimea already! Secondly, you need to change the investment model in the root. The main investment resource should not be foreign money, but its own issuing activity.

This is what Glazyev should do: work is no end! And then the question of further privatization arises. It makes no sense to pinch off pieces from Rosneft and others like it, in order to give us dollars. In the new term - no privatization action!

Many in the government are puzzled, how to stimulate economic growth?
An important component in the price of any product / service is energy costs. Electricity, gas for Russian enterprises should be available. The price of fuel is reduced in 2-3 times. Have you, from economic development, ever calculated the economic effect of reducing a liter of diesel or gasoline to 10 rubles per liter? But count! At first, Rosneft and Gazprom will lose in revenue, but economic growth, real, and not drawn by statistics, will pleasantly surprise everyone.

Fertility in Russia, slightly higher than in Europe. But not enough for population growth. All because of - the lack of confidence in the future of the parents. It is necessary to fundamentally revise the entire system of subsidies to mothers. Up to the provision of free housing for a third child. It is also necessary to increase benefits for children. Set the minimum pension above the subsistence minimum 1,5 - 2 times.

From the shameful organization of the WTO urgently needs to leave! Break the contract and everything! This organization on a global scale dictates the division of labor between countries. Naturally, we have the role of a gas station.

Calculations with all countries to produce in rubles. Why should we trade in dollars with Kazakhs? Where is the logic? But, we must pay tribute, Putin has already done a lot in this direction.

Well, not in the old version, but in the new form of the USSR it is necessary to revive. With the leader of Belarus you need to talk more rigidly. Put time limits for the association. And, of course, the main opponent of the union, Mr. Lukashenko, “to ask” either to stand aside or to fulfill his promises. And then one demagoguery.

Looking for a landing. Do not house arrest, and landing. Ideally - to change the criminal liability towards increased penalties. He stole from the town three kilometers of asphalt - 10 years colony. Why? People only support!

The conclusion then one - the last time, and nothing to lose. So Putin wrote himself history, Returning Russian Crimea. But fate had this plow to the last. There will naturally be war. The war of the liberal clan against such actions. But someone will have to do it anyway.

Who does not like you, Vladimir Vladimirovich.? The people are waiting ...

Ctrl Enter
Noticed oshЫbku Highlight text and press. Ctrl + Enter
We are
About Stalin and KhrushchevWhat you didn't want to know about England
Military Reviewin Yandex News
Military Reviewin Google News
97 comments
Information
Dear reader, to leave comments on the publication, you must to register.