About 20, the crews of the Mi-8AMTSH launched a rocket attack on the "enemy" in the Rostov region

October 23 2017
22
Crews of the Mi-8 transport assault helicopters of the AMTSh “Terminator" army aviation compound aviation, based in the Rostov region, inflicted a missile strike on the armored vehicles of a conditional opponent while performing the test exercises, reports press office Southern District. 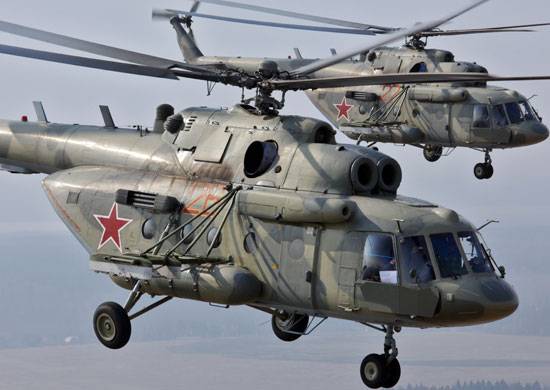 The exercises were performed as part of the final test for the 2017 school year.

After hovering from the command post, the helicopters went in pairs into the designated area, worked out the search and classification of targets, after which they conducted practical firing using guided missiles and cannon weapons,
says release.

It is noted that "the complexity of the flight was that the crews operated at extremely low altitude, in order to camouflage using the terrain."

During the flights, the pilots also performed complex maneuvers in order to avoid the impact of the enemy’s air defense weapons and suppress its radar equipment.

In addition, "the crews have worked out the elements of a re-entry to attack, cover each other and leave a conditioned opponent from retaliation," the press service added.

In total, more than 20 crews were involved in the events.

Ctrl Enter
Noticed a mistake Highlight text and press. Ctrl + Enter
We are
Mi-8AMTSH-VA helicopter will be exportedSudden verification of the combat readiness of the Northern Fleet, ZVO and Airborne Troops
22 comments
Ad