Project "ZZ". Sobchak and the front "dissatisfied." The people are "tired" from Putin

October 23 2017
85
President Putin spoke of the update. And right there on the political Olympus Ksenia Sobchak appeared. In the West, she is called the “daughter of the former mentor” Vladimir Putin. Other foreign analysts believe that without the approval of the president, Xenia would not announce her desire to run for the presidency. There is another opinion: the figure Sobchak "decorate" the election-2018.


Is this candidate Ksenia Sobchak? In a large German newspaper «Die Welt» An article by Pavel Lokshin (Pavel Lokshin) was published, in which Sobchak is referred to as a spoiler candidate. It says the title: "Xenia Sobtschak, die Spoilerkandidatin." 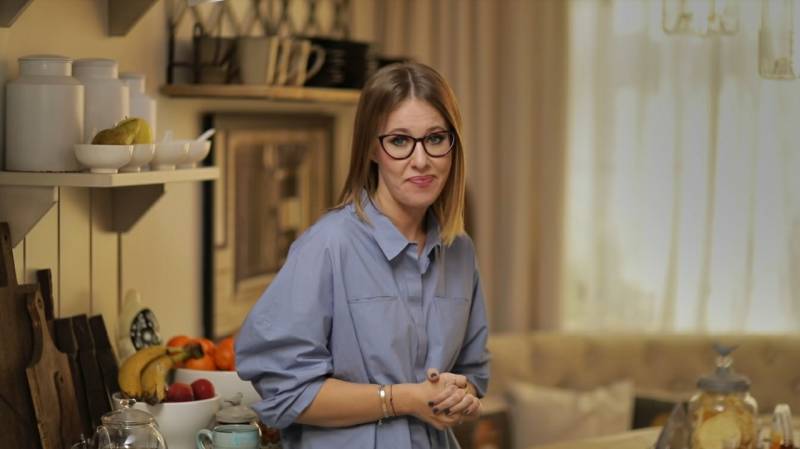 Journalist Ksenia Sobchak, daughter of the former mayor of St. Petersburg, intends to run for the next presidential election in Russia. She "wants to become president of Russia," writes Lokshin. Her goal: to collect the voices of the "disgruntled." But is this young woman a “real alternative”? “There are doubts about her true intentions,” the author writes.

Ksenia Sobchak presents herself in the video: she, a young woman, is standing in the kitchen. The kitchen is the place, the author recalls, where "Russian families traditionally discuss politics." Ksenia says: “Enough, guys, well, good. Well, really, you all got it! ”

So, in March 2018, a TV journalist and a secular celebrity will participate in the Russian presidential election. 35-year-old lady is positioning herself as a candidate "against all", who intends to fight against decades of dominance in the politics of the same people. Thus, she will speak not only against the “Kremlin chief” Vladimir Putin, but also against the “traditionally hopeless” candidates from the communists and liberals, who unsuccessfully challenged even Putin’s predecessor, Boris Yeltsin.

We see a confident modern woman. What did she think? Making fun of the political climate in the country?

Although she has never concealed her opposition sympathies, she is associated with the Russian elite, and Putin knows from childhood, the author recalls. It was her father, the first freely elected mayor of St. Petersburg, Anatoly Sobchak, who made the future president his deputy in the middle of the 1990s, which gave rise to Putin’s political career.

Such a proximity to power, the observer believes, raises doubts "in the true intentions of the new candidate." For several weeks now, Moscow has been discussing a possible candidate, whose name arose on the political Olympus after statements from “anonymous sources,” telling the press that the presidential administration is conducting “negotiations” with K. Sobchak.

The candidacy of Sobchak should “revive” Putin’s re-election and help increase popular attendance at elections. Although Putin has not officially announced his candidacy, everyone is confident that he will come forward and win the election, the author points out.

Sobchak like "accusations" in his address rejects. She wrote an open letter to the liberal newspaper Vedomosti, where she stated that her candidacy would be useful for the opposition and society. And yet “there is some evidence” of the fact that “the Kremlin actually stands behind the candidacy of Sobchak,” writes Pavel Lokshin.

Two hours after the “announcement” Sobchak, Russian state television reported “friendly” about this. Even a small excerpt from her kitchen video was shown! It is impossible to imagine that Putin’s opponent Alexei Navalny, who has been campaigning for a long time, will receive such an advertisement! 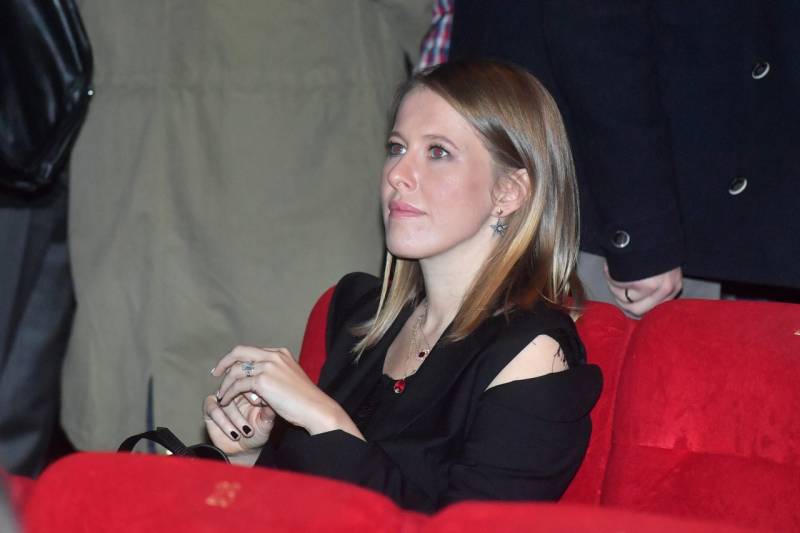 Interestingly, the candidacy of Sobchak is criticized just from the camp of Navalny, as well as in the Yabloko party. Moreover, Sobchak gets from the "loyal supporters" of the Kremlin in the State Duma.

What benefits does the Kremlin win from Sobchak? Russian political analysts agree that the young woman is going to become the so-called spoiler against Navalny, which should split the opposition electorate.

Meanwhile, Sobchak said she would withdraw his candidacy if Navalny was allowed to participate in the elections. However, the Kremlin is unlikely to allow this “criticism of Putin” to advance. It is curious that before Sobchak Navalny accused of undemocratic behavior and the "cult of the leader."

However, the Kremlin is interested in “giving a face” to the expected low percentage of “protest” voters. The candidature of Sobchak “imitates political competition,” says Andrei Kolesnikov from the Moscow Carnegie Center. The candidate is known and so unpopular that it discredits the opposition as a whole. According to polls, Sobchak know more than 90% of Russians, and about 60% of them have a negative attitude towards it.

Most experts believe that Sobchak could get a tiny number of votes. A scenario similar to the presidential election in 2012, when billionaire Mikhail Prokhorov collected about eight percent of the vote, is considered unlikely by Moscow politicians in the case of Sobchak.

One of these days Sobchak will present his program. To officially register as a candidate, she will need to collect 300.000 signatures. It is likely that she will have to "resort to the unofficial assistance of the Kremlin," the observer mocks.

David filipov in «The Washington Post» meanwhile, he cited the well-known Western opinion: the Russian people were “tired” of V. Putin’s rule.

President Vladimir Putin, the author recalls, has still not indicated whether he will seek re-election. At the forum of experts on international politics in Valdai, he only said that today's leaders are responsible for ensuring that the life of young people "is better, fairer and safer." “Our task is to realize these dreams,” an American journalist quotes Putin.

The next president of Russia should ensure the transformation of Russia into an economically competitive country with a modern society and a stable political system. However, he did not say what would become such a president.

When Putin was asked if the next Kremlin leader could be a woman, he replied: "Everything is possible with us."

Putin, with his unsurpassed 80-percent approval rating, now faces a puzzle: Should he become the leader who will rule Russia "longer than anyone since the Soviet dictator Joseph Stalin"? Now he focused on determining the new place of Russia in the world order. He offered Russia's support to leaders in the Middle East and Europe as an alternative to what he calls US-sponsored regime change. However, Russian voters, the author writes further, showed "signs of fatigue from the current system." Protests under the slogans of the fight against corruption have recently twice taken to the streets more protesters in cities across the country.

Young voters show particular concern here. It is young people who are going to protest actions inspired by anti-corruption activist Alexei Navalny. Therefore, the Kremlin is looking for ways to interest young people, drag them onto the side of “loyal political movements,” the correspondent believes. Some find Ksenia Sobchak’s candidacy "Kremlin sabotage in this direction", although the presidential press secretary Peskov rejects such assumptions.

According to political analyst Tatyana Stanova, after almost 18 years in power, Putin is more interested in “court stories"Rather than the" needs of the people. " “This abstract approach to politics,” she notes, “means that the will of the people (and the role of elections) in Russia is diminishing even more and is no longer a source of its legitimacy.”

Candidates like Ksenia Sobchak are not able to really oppose Putin, however, “they offer voters a choice and give voters a kind of European-style democracy,” the author ironically says. It is expected, he continues, that candidates from communists and ultranationalist candidates will receive a small percentage of the votes.

It is curious that Mr. Navalny commented on the desire of K. Sobchak to be elected president almost in Putin’s style.

If Putin said at the Valdai forum: “Everything is possible with us,” then Navalny, who was released after an administrative arrest, сообщил: "Everyone has the right to go to the polls." Further, not without irony, he listed these “eligible”: “I like someone more, someone less. Zyuganov, Yavlinsky, Sobchak, Navalny - everyone can go to the polls. ” And he immediately noted that the elections will be invalid if they do not let him go there.

As for the political weight of Sobchak, then, of course, she has no real chance of becoming the first female president of market Russia. At least, political scientists and sociologists do not give her such chances. Moreover, Sobchak is ridiculed.

Political scientist Alexey Malashenko сказал, for example, about the nomination of Sobchak is the following: "Whoever was familiar with the situation before that, did not even grin, but just smiled."

And the director of the Center for Public Administration and Public Policy at Carleton University, Peter Dutkevich, responded about the candidacy of Sobchak in the following way: “It was a good joke, which everyone accepted with stormy applause.”

Let's applaud charming Xenia! Suddenly she will become the next president? Everything is possible with us!

Ctrl Enter
Noticed oshЫbku Highlight text and press. Ctrl + Enter
We are
Geopolitical mosaic: anti-Islamic advertising campaign launched in New York, and Russia will be left without nipples and diapersGeopolitical mosaic: if he wins the election, Mitt Romney is ready to attack Iran, and Ksenia Sobchak has become a revolutionary star of the American press.
Military Reviewin Yandex News
Military Reviewin Google News
85 comments
Information
Dear reader, to leave comments on the publication, you must to register.