In the United States, they are not used to waiting for holidays and anniversaries for the ceremonial reception of military equipment. Instead of beautiful television spots with speeches by officials on the background of ships being built (and very rarely completed), the United States is going through painstaking daily work to rearm and strengthen fleet.

Until the end of the year there are still two whole months, but a number of large combat units have already been commissioned overseas. According to maritime tradition, all can be attributed to the ships of the first rank - large and carrying the most powerful weapons. 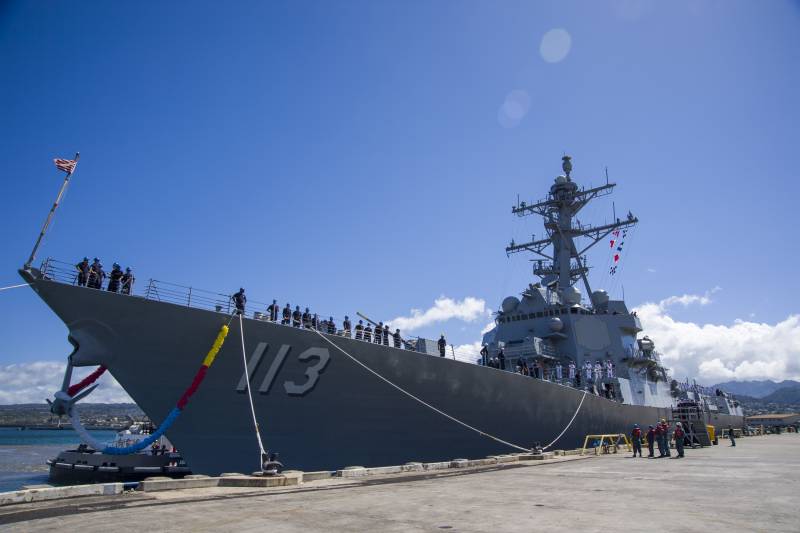 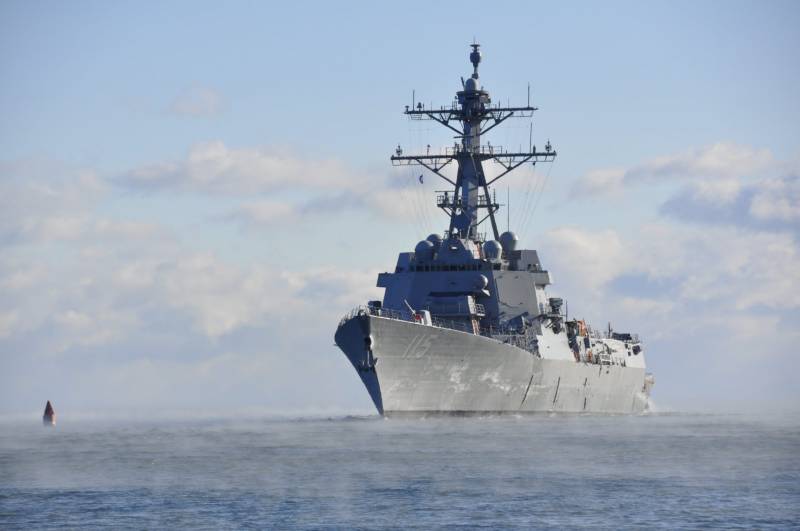 Curiously, the second destroyer is named after a Mexican who served in the army for citizenship. Alas, he received it posthumously. According to the official version, he accomplished the feat by covering his body with a grenade. 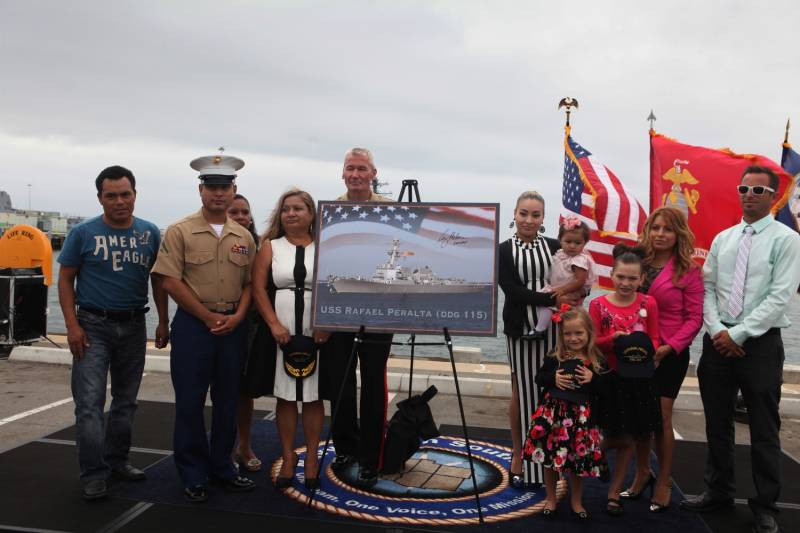 Both built ships are of the type “Orly Burke”, subseries IIA “Restart”. Those who meet with amazement news about the pace of commissioning of American destroyers (two per year!), please hold back emotions. "Finn" and "Peralta" - the first destroyers after a long five-year hiatus. The resumption of construction of “Burkov” is caused by the refusal of the serial construction of “Zamvoltov”. This is indicated by the very name of the subseries (“restart”).

On the other hand, the fears look quite justified. “Finn” and “Peralta” became already 63-it and, accordingly, 64-th destroyers of their type.

Each of them is capable of releasing as many cruise missiles as all the ships of the Russian Navy, equipped to date with the Caliber complex. Such is the harsh truth about the “likely adversary.” To hide it is to betray people.

The composition of weapons can vary depending on the tasks - shock, anti-submarine, anti-aircraft. The destroyer is equipped with the Aegis air defense system. On board there are two anti-submarine helicopters. Full displacement - about 10 thousand tons. The regular crew is 320 people.

Surely someone will ask who is assigned an intermediate index (“114”). The answer - the destroyer “Ralph Johnson”, whose construction due to failures of contractors, was delayed and the entry into service was postponed to the end of 2017 or the beginning of 2018. Like this. It turns out that the situation with delays and timing shifts is the prerogative of not only the domestic USC. 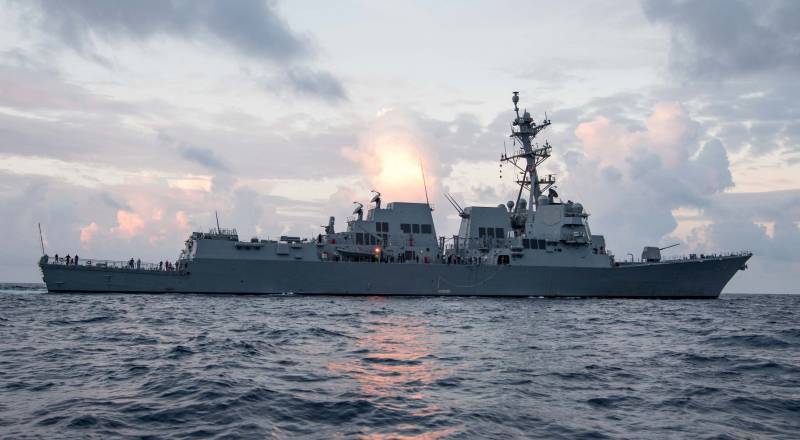 In addition to the destroyers theme, it is worth mentioning the following hull, the DDG-116 (“Thomas Hadner”), launched on April 1 on the 2017 of the year. On the day of laughter, but for some reason not funny.

The next, 66 th “Burke” refers to the next sub-series IIA “Technology Implementation”. It is intended to introduce in its design and explore in practice promising solutions that will be fully used in destroyers created to replace the existing Burkees (despite the similar designation, the “Arly Burk” Flight III of the 2030's sample will be largely other ship).

What technologies are we talking about - it is not known for certain. The appearance of the DDG-116 under construction does not differ from the previous Finn and Peralta.

The tactical number "116" does not mean that the US Navy has 116 destroyers right now. Far from it. This is a continuous numbering of all destroyers with guided missile weapons (URO), or in the original DDG. Half of which have long been at peace at the bottom.

Talking about destroyers should, in any case, touch on the topic with the odious “Zamvolt”. This year, 2017, the next destroyer of this project, “Michael Monsour”, is preparing to pass the tests. In this sense, the Americans build their experimental “non-serial” ships faster than we build our “serial” ships.

From destroyers to smaller ships

In June, the coastal warship Gabriel Giffords (LCS-10) was commissioned. 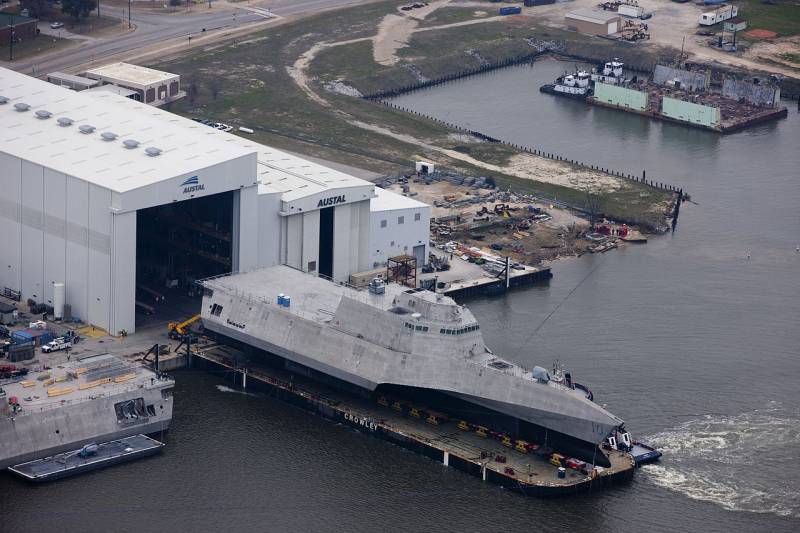 Despite ten built LCS class ships (“littoral combat ship”), the sailors and shipbuilders did not reach a common conclusion. What is it? The ships of the new era - or floating misunderstandings worth nearly billion.

Despite the speed of 45 nodes - faster than any of the modern displacement ships of this size, experts are confused by the lack of any serious attack and anti-aircraft weapons from the LCS. It is easy to be convinced of this by comparing LCS with the Russian corvette of the 20385 Ave.

On the other hand, the Yankees may have needed exactly the high-speed patrol ship, and not the next “burk” with Ajis.

Moreover, it is not just a sentry. The LCS class ship is both a minesweeper, and an anti-submarine, and a mobile helicopter base, and a platform on which to place, depending on the task, any other weapons. Including guided missiles. 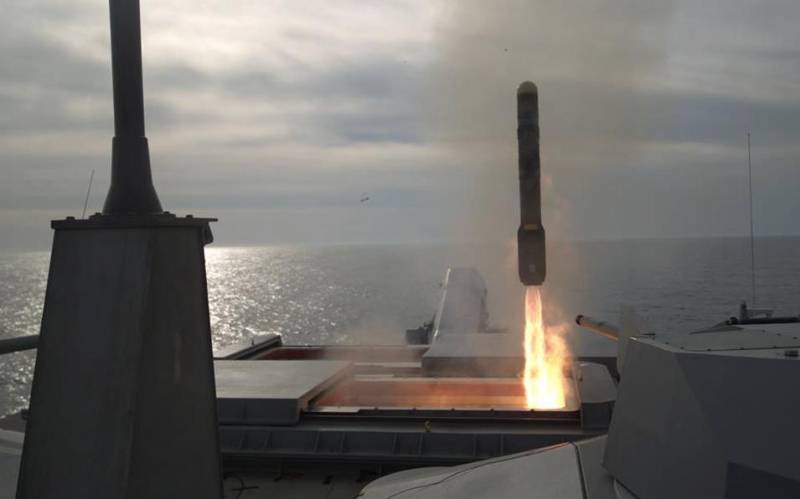 Launcher with Hellfire onboard LCS

Remembering the notorious Henry Ford, "the best car is the one that is new." In this sense, the new LCS has its weighty advantage over ships of past eras. And its appearance gives the fleet new opportunities.

According to the established plans, the Yankees annually enter into the composition of each one atomic multipurpose submarine. This year, the “Washington”, the 14-th submarine of the type “Virginia” (sub-series “Block 3”), entered into service. 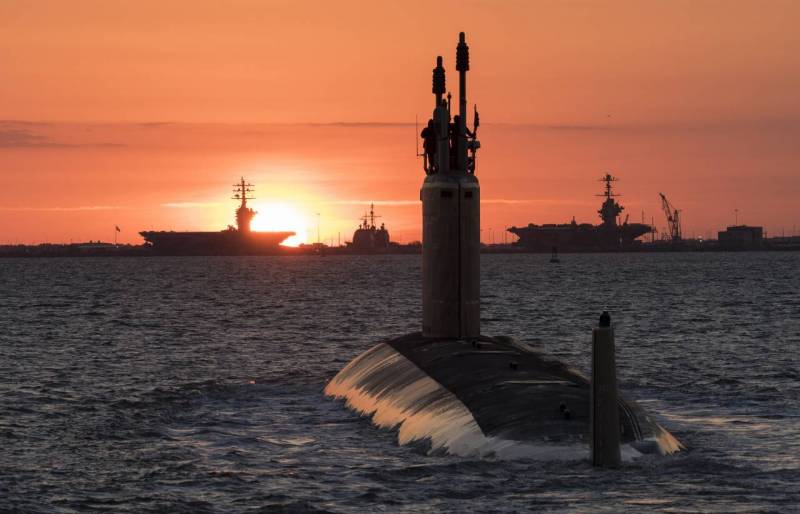 About submarines of this type more than once described in detail on the pages of “Military Review”. In short, this is the widespread introduction of modern technologies with the keen desire of the customer to limit the cost of the submarine. Therefore, instead of expensive “superheroes”, shipyards are building a series of small submarines. With the same “average” characteristics. At the same time, with all the necessary equipment for the conduct of modern submarine warfare.

Like a real cowboy, in the corps of “Washington” are hidden two “six-shot Colt”. Two mines, with mounted in them starting glasses for "Tomahawks." Total - 12 KR. Of course, not counting the mine-torpedo weapons and equipment for combat swimmers. Hydroacoustic complex of the submarine is optimized for operations in shallow water (“horseshoe-shaped” antenna for scanning the seabed). 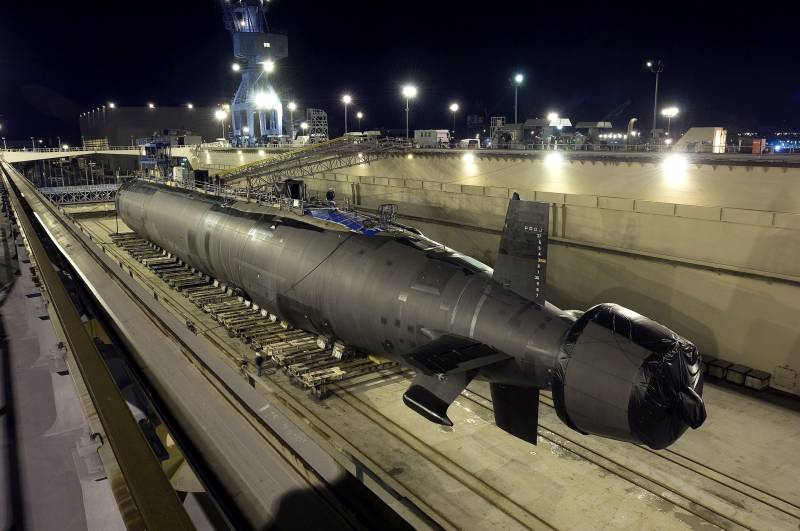 Officially, the tab “Washington” took place in 2014 year. But do not take this data seriously. Even experienced US shipbuilders are not able to build a modern nuclear submarine for 3 of the year. The real start of work related to the cutting of metal and the issuance of orders to contractors for the manufacture of mechanisms for the future submarine “Washington”, took place on September 2 2011. Three years later, not the mortgage section was installed on the slipway (as the Sevmash shipyards), but ready-made sections saturated with equipment. The next three years were spent on connecting thousands of modules, with the connection of all communications and valves.

Total - six years of work. At the same time, we are talking about the serial unit, whose construction technology was studied and tested in practice long before its construction began.

Another ship worthy of mention in this list was the Tripoli amphibious assault ship. Named so not in honor of the recent operation in Libya, but in memory of the Berber war of the early nineteenth century. The first US military operation far beyond their continent. 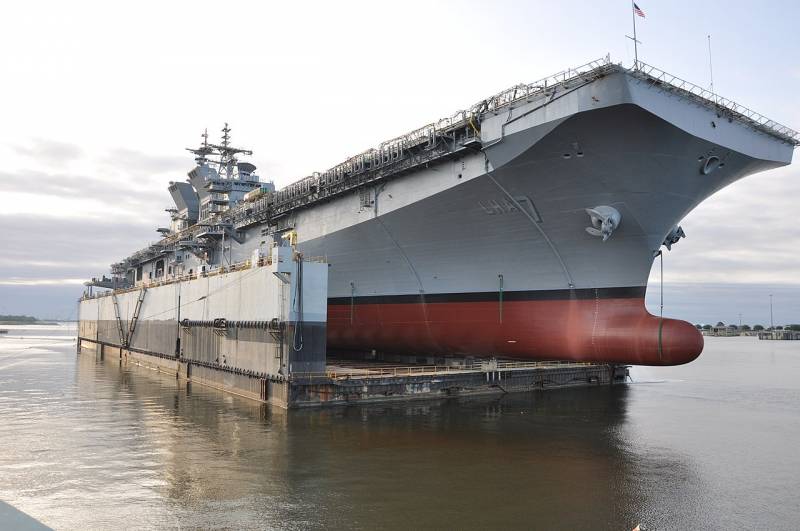 Returning to the new UDC, he has not had time to enter service. Launching took place in May 2017, and the completion would take at least another couple of years. However, due to the size and scope of the work, it is worth mentioning more in detail.

Externally, it represents an enlarged “Mistral”. The length of the flight deck “Tripoli” - 257 meters, full displacement - 45 thousand tons. Domestic designation UDC does not fully reflect the purpose of this ship. In the original, this is the LHA - “amphibious assault carrier”.

Namely rotorcraft aviation, convertiplanes and VTOL aircraft are his main weapons. Unlike the Mistral, this ship is deprived of a docking chamber with landing boats. It is not suitable for transporting heavy military equipment.

The project is based on the UDC “Makin Island”, official sources emphasize that in the design process of “Tripoli” many compartments, originally intended for the placement of the landing force, hospitals and cargo decks were sacrificed to the main task. Increasing the number of wing, more convenient placement and maintenance of aircraft. Repair shops, fuel, spare parts. The height of the agar deck was increased, two ceiling cranes were installed in the hangar. The ship is prepared for use and maintenance of F-35B vertical take-off fighters.

Light aircraft carrier - sounds like a good idea. But the main question remains. For what the Americans needed this low-speed “stub” - in the presence of an armada of a dozen full-fledged “Nimitz” with catapults. There is no clear and confident answer even for those who directly made the decision on its construction. However, even paradoxical ships like the LKR Alaska were built in America. Therefore, I am not surprised.

Tripoli is a tribute to the traditions of the marines. The ILC command desired to get their own light aircraft carrier class LHA (already the second in a row).

Those who argue about the "cut of funds" clearly do not understand the meaning of these words. Cutting - when the allocated funds disappear, and in practice - a ten-year long-term and empty berth. The famous Marxian formula “commodity-money-commodity” turns into “promise-money-emptiness”. In the above situation, everything is different. All these projects can be called “inadequate defense spending.” But they exist in reality, moreover, they are realized in a very short time. The concept of "cut" there is nothing to do with it.

The listed ships are the real reinforcement of the Navy, the breath of the real industry. Which does not exclude certain delays and "misuse of funds." But, all these problems become invisible, against the background of the final result.

This article is for those who are tired of reading news in the future tense. “Planned”, “started the design”, “moved to 20-tenth year”. Also, the material will be useful for familiarizing the authors with articles on how the Atlantic campaign of two corvettes of the Baltic Fleet, which took place in October, could make a great impression on the command of the US Navy.

Ctrl Enter
Noticed a mistake Highlight text and press. Ctrl + Enter
We are
Another Unified Day of Acceptance of Military Products Has PassedHeld the second single day of acceptance of military products
103 comments
Information
Dear reader, to leave comments on the publication, you must to register.