Not urgent in the room. Why in the zoo border

October 23 2017
14
Today, the press is just mad about Ukrainian issues. Where not thrust, everywhere Maidan, Ukrainians occupied news. And most importantly, people read. Right envy takes. Maybe they, these Ukrainians, deliberately constantly otchibuchivayut something to arouse interest in themselves? Not a country, but a thousand and one nights ... and a day. 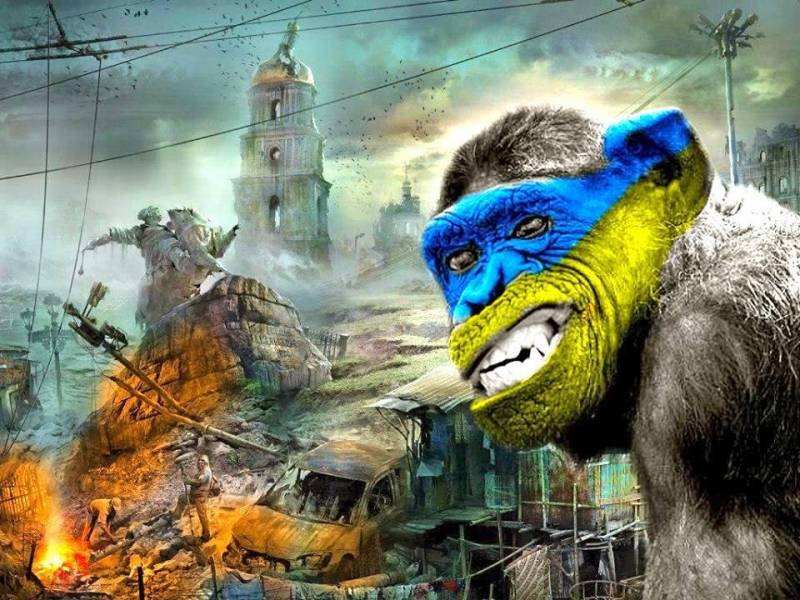 So I understood what was needed in this trend, in a quick way. To make it look like Ukraine is interesting to me. To Kiev, I, of course, are not allowed. Therefore, I will tell you about a completely different place of this beautiful, but a little frozen country. Frozen in all senses. And in the sense of heating in apartments, and in the sense of the heads of a certain part of the population.

Once, during school years, I understood a simple truth from a biology course. Bad is a monkey that does not dream of becoming a man. Later I realized that a person who does not notice that he is returning to the monkey state is also not good. But this is already a life experience called.

Now some readers will say that with the onset of winter, and we already have a snowball periodically falling, the author’s brain began to "falter." And no. It was me who accidentally drove into the zoo yesterday. Actually, I decided to shoot landscapes. And then the grandmother on the road with a bag of potatoes and a strange inscription, "Help the animals!". Stopped naturally.

It turns out in the next holiday house there is a zoo. Well, not Moscow of course, but decent. There is something to see. Only here they feed animals "according to the norm." And we have frost hoo. Yes, and the rest nice to feel like a "man of the wide soul" for small money. In short, I bought this very bag of potatoes and went to the zoo.

And there the system is already debugged. A bag with "huge thanks" was taken away. I was let inside. See a good man. Also, caretakers talk about their beasts. And look at each other (people and animals) with loving eyes. What can not be said about some animals in relation to me personally. We are probably annoying them so much during the day ... True to my question about fatigue, I was told that these animals very much without people are bored. And those eyes are from instincts. Predators. Pretend options so to speak.

But most of all I liked the contact zoo. There together animal and human children walk. It is ridiculous to watch as a kid, barely standing on his feet, approaches the same kid or pig. And then begin to squeal with joy on both sides. And any kid comes with a delicacy. Zoo, to which there are no borders. Beauty. All together get along and all is well.

And now I will return to Ukraine. Strange things are still happening there. Remember 1991? When did we suddenly start living in different states? Remember funny storieswhen a man turned out to be a "rip-raiser". He lives in one country, and a country house, in the sense of a dacha of six acres, in another. Or work went to another state. "Contact Zoo" for people.

But then, the states began little by little to clean up the borders. Not so of course, as the Soviet frontiers protected, but some order appeared. Everywhere. In addition to Ukraine. There, under the brand of capitalism, the western frontiers of the country began ... to sell to private traders. Why? Earth is the same. Let her master be. And in the future ... Anyway, we are going to Europe. And there the borders were canceled.

All quickly sold out. Imagine the horror of the smugglers? The blue dream of many generations about renting one meter of the state border burst like a soap bubble. I bought myself a couple of hectares. Towers set. Guard with weapons. And ... process the plot. In terms of lead agriculture. A border guards can be frightening shots or there powerful blinding searchlights. Do not stare at someone else's goodness Herod.

And such beauty continued until ... the adoption of the law on the state language of Ukraine. Well, remember this great event, after which some countries already jumped (in pure Ukrainian) from outrage. Hungarians there, Romanians and others we. Only we say little. They conceived, and maybe we are already carrying out some kind of "revenge." And the Hungarians directly pointed out to the Ukrainians in their place ... in the European Union. In the sense they said that their place is in pairs ... the threshold, sorry, now. And the Ukrainians, who are Hungarians, well, who live in Ukraine, but have not learned Ukrainian, and Russian, have indicated. There, just say.

Ah well! And the leaders of Kiev decided to press the contraband from Ukraine to Hungary. So that these intractable Europeans understand that Ukraine can impose "economic sanctions". Instructions of all written. Directives Orders sent. The border guards shoved to the border and there they opened fire with shotguns on them. Private property! Do not steal the harvest! That's because figl-migli what. And all according to the law.

I had to go to court to border guards. Workplace deprived of the brave guys. Something already sued. The press service of the border guards proudly informs: "Today, the State Border Service of Ukraine, in cooperation with the prosecutor's office of the Transcarpathian region, has already returned land plots with a total area of ​​more than 34 hectares to state ownership of 132."

Here, after all, the annual award for good service at stake. Suddenly deprived. For poor quality work. "Despite the fact that land plots located in close proximity to the state border of Ukraine are privately owned, the State Border Guard Service of Ukraine fully protects the state border, patrols it and performs other tasks."

The Mukachevo border detachment of the State Border Service together with the military prosecutor’s office decided to take the local authorities away! Give up jobs! Give us some plots! Border guards are people too! They want to have their own "small share" with the protection of borders! In short, the epic unfolded on the return of the state border to the state! Almost 90 hectares of land!

The chief military prosecutor of Ukraine, Anatoly Matios, is almost crying. "I once again came across documents that indicate that our 150 km border in Transcarpathia with Hungary are private ... In fact, 150 km are land plots - 2 ha - the village council gave the locals. After that, they were accumulated in individual hands, communication is built ... "

But! .. Despite the lack of borders in state ownership, the Ukrainian border guards have strengthened the protection of the frontiers from aggressive Hungarians, Romanians and Moldovans! Not a single mouse will now penetrate into Ukraine through those areas that have already sued! From October 18!

Since October 18, the protection of the state border with the countries of the European Union within the 4 areas has been strengthened. Chernihiv, Transcarpathian, Volyn and Lviv! The chairman of the State Border Service even threw his reserves there. Cadets from the Academy. B. Khmelnitsky seconded. Mobile border detachment "Dozor" threw. Yes, and mobile border commandants to boot! Up to 300, the people turned out to have moved beyond the western border!

The chief of staff, Colonel Ruslan Krasnoportko, said bluntly: "The main purpose of strengthening the protection of this direction of the border is to counter organized crime. Unmanned aerial vehicles equipped with modern photo and video cameras as well as thermal imaging devices will be used to assist in patrolling."

By the way, if you look around closely, the "green caps" has become more and in Chernivtsi and Ivano-Frankivsk regions. And so. Unnoticed by the rest of the citizens. Have Romanians and Moldovans conceived of what? In short, the "contact zoo" in the west of the square ceases to exist. "Beasts" have grown up. Already looking at people the same way as me. Instincts are awake.

Ukrainian "zoo" is becoming a classic. If earlier the country fenced off from Russia and Belarus with “iron bars”, now the “fences” are being strengthened along the entire perimeter. People separately, animals separately. And that's right, I guess. Safety is called. The only thing that I still do not understand, how is "the whole world with us"? Or those who can ask for bestiality in relation to compatriots immediately go to "not the whole world"?

But I don’t regret a bit about money and time spent on animals. They understand, these beasts, when a person comes to them with good. I put one bull's head to scratch behind his ear. Yeah. Fingers in the wool "drowned." For winter, the herbivore prepared. And his eyes, when I finally got to the skin, already lit up with happiness. If anyone sees such a woman on the side of the road, I strongly advise you to repeat my action. Contact zoo he ennobled the soul.

And the "classic" is just our egoism, human, warms. Here he is, the king of beasts in a cage! And I'm at liberty. So I'm then like the emperor of the beasts. And where will the "emperor" run when, suddenly, as it was with the author in Belovezhskaya Pushcha, the bison log performing the functions of a fence, without straining to "squeeze out"? He's tame, but he doesn't like fuss. And then the "emperors" with flashlights. Oh, and the cross was then. I personally hid behind the wolf cages. Heroically.

To be honest, I understand that the state border must be protected. Moreover, there are no states without borders. Yes, and economic interests must be respected. And I understand the actions of the Ukrainian authorities. Only in the depths of the soul does the worm move. Somehow it turns out interesting. While the eyes on Kiev’s bestial attitude towards their own fellow citizens were closed, the borders were not needed. But it cost Budapest, Bucharest or Chisinau not to agree with the Ukrainian version immediately remembered the frontiers.

Or do they know something in Kiev about some Transcarpathian People’s Republic? Preparing an expansion of the ATO?

Ctrl Enter
Noticed a mistake Highlight text and press. Ctrl + Enter
We are
Situational analysis of the death of the MH17 flight (Malaysian Boeing 777), made on the basis of engineering analysis from 15.08.2014Results of the week. “In our cooperative, the board is always agreed”
14 comments
Ad