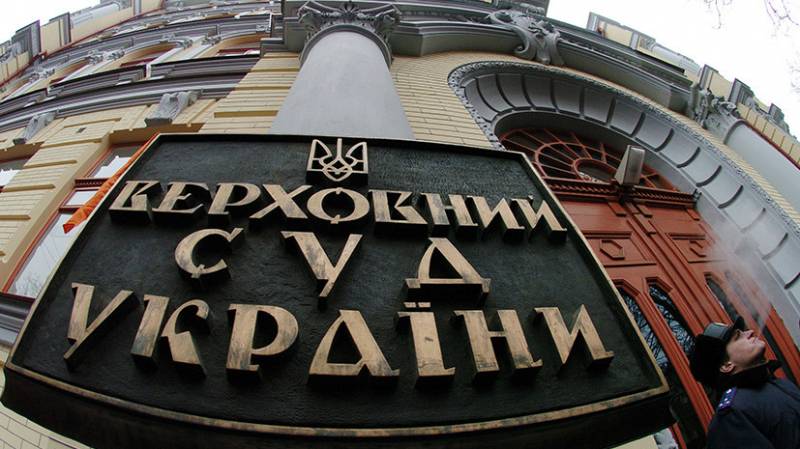 After the Yushchenko regime’s theft with Russian gas, the Europeans insured themselves and, together with Russia, quickly built the Nord Stream. When Poroshenko in Kiev took into account the lessons stories and gas theft approach "strategically."

Since then, both Europe and Russia have taken a whole range of measures protecting gas coming from Russia to Europe. This forced Kiev, forced to frustrate the EU, look for less obvious ways to seize someone else's goods.

Using the favor of the West, with a kind smile watching the pranks of his child, Kiev began to make absurd court decisions in bundles, according to which Gazprom owed him almost half a trillion (!) Rubles.

After the first decisions, having understood that there is a decision, but there is no money, the Kiev courts decided not to withdraw money and shares, but property. In essence, the theft of transit Russian gas. Because there is simply no other liquid property of Gazprom in the sphere of the reach of the Kiev authorities.

In hryvnia, Kiev's appetite draws on 171 billion (6,4 billion dollars). This is a fine for the so-called abuse of the monopoly position on the natural gas transit market. The “logic” is as follows: Gazprom is obliged (although there are no written commitments) to pump more gas through Ukraine. At least 100 billion cubic meters. Moreover, due to the monopolistic position of Gazprom in Ukraine, there are no alternative suppliers.

It would be more logical to make a complaint to Yushchenko, but it is impossible - he is the “father of the Orange Revolution” And this is holy, though unloved.
As for the absurd claims and the fabulous size of the fine, then everything is extremely simple. Kiev initially did not expect to profit from any assets of Gazprom, except for gas itself.

On the approach (possibly in November) the final decision of the European courts on numerous gas disputes. And Kiev will have to pay - according to preliminary estimates, based on interim court decisions, more than a billion dollars.

For a lean Kiev treasury - a decent amount. Especially in view of the negative decision for Kiev and on the return of 3 billion dollars in Eurobonds - there are more than 3,5 billion running there with interest and penalties.

This suggests, according to the logic of Kiev, an elegant solution - to write off part of the fine imposed on Gazprom as part of debt repayment.

And then on the approach the end of 2018 of the year and the onset of the last heating season before the expiration of the contract for the transit of gas from Russia to Europe. Moreover, by this time they will come to the end of work on the Turkish Stream, and there on the Nord Stream - 2.

Provided that the existing regime is maintained, the chances of getting a new contract for gas pumping are equal to 100 percent. Russia will necessarily conclude such a contract for purely political reasons. Even if you have to underload the SP-2.

That's just the volume of pumping will be somewhere 30-50 billion cubic meters. 30 billion is the minimum annual transit volume at which the GTS can work at all, maintaining at least some pressure in the system. 50 billion is less than the volume at which the transit fee according to the average European tariffs will cover Kiev's costs for maintaining the system in working condition.

Very elegant decision from the Russian side. Good uncle does not allow the state-forming system to die, 40 to thousands of kilometers of pipes. And let's face it, in a number of countries so deliver gas more convenient and more profitable. But Kiev will not get a penny from this. Well, if it goes to zero. By the way, it will be up to Moscow to decide whether it will be released or not.

It seems to realize this in Kiev. And, according to their meager strength, they are preparing for the land, as the unforgettable Klitschko used to say. Trying to lay at least some piece of paper under the place of their future fall. Remove gas without stealing. and according to a valid judgment.

At the same time, in Kiev, they perfectly understand what will happen and what will be the reaction of Europe to such a demarche. No, they will not freeze there, after Yushchenko they built gas storages in the EU and diversified gas supplies as much as they could. But all the same, no matter how Kiev tried to justify and conceal theft, the EU will be extremely unhappy. After 2008, Yushchenko simply "refused from home", ceasing communication with him beyond the minimum necessary. With these it will be even worse.

But in Kiev already today they obviously live by the principle “after us even the flood”. For those. who deliberately destroys their own country for years, someone's gas and someone's discontent will be a weak argument. Today, still yes - Kiev has to reckon with the EU.

But five minutes before the death of the regime ...

Ctrl Enter
Noticed oshЫbku Highlight text and press. Ctrl + Enter
We are
The action “Military service under the contract is your choice!” In Rostov-on-Don: future contract servicemen, exhibitions and “Russian Knights”China expands its amphibious capabilities
69 comments
Information
Dear reader, to leave comments on the publication, you must to register.