Albukemal - the decisive battle for Syria 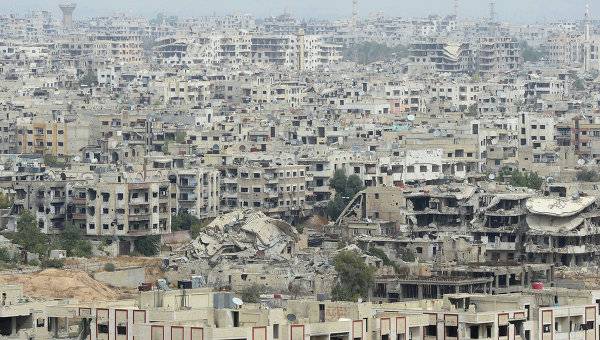 In recent weeks, the media has increasingly mentioned the settlement of Al-Tanf on the Syrian-Jordanian border, where the US military base is located, and in parallel with it the Rukban refugee camp, in which, according to a number of military experts and authorities, there is also a camp for the training of militants. The instructors, of course, are the American military, who have declared around the Al-Tanfah the so-called 55-kilometer safety zone. But why did the United States create a base for training militants at the border? And what goals does Washington really pursue?

From the outset, the US activity in the region of Al-TANF means of objective control of the Ministry of Defense Russia movement militants were seen. What was soon announced by the spokesman for the Russian military department Major General Igor Konashenkov, stating that Al-Tanf is a “black hole” on the map of Syria. And indeed, how else can one call actions for the full support of Washington by illegal armed formations?

Located directly on the territory of the camp, divided into sectors between the factions, the militants, with the active participation of military instructors from Washington, actually use the "Rukban" as a human shield. But first, let's deal with gangs. Who really lives in At-Tanf? The basis of the grouping among the gangs was the so-called “New Syrian Army” (“Jaish Surya Al-Jadid”). It included various small groups of militants. The largest among them are: “Kuvat Shahid Ahmad Abdu” (“Forces named after shahid Ahmad Abdu”, also operates in the Eastern Kalamune), the “Asuad (Usud) Sharqiya” (“Eastern Lions”). Apart stands "Magavir Jaish Al-Thawra" ( "Army commandos revolution"). She eventually became one of the leading and influential groups on Al-Tanf.

Note that from time to time there are cardinal differences between fighters, including direct clashes. Hence a logical question arises: why does Washington keep so many illegal armed groups in one place? Based on the situation in the country, the answer follows by itself: the situation in Syria is changing dynamically. Only last month, government troops, with the support of the Russian videoconferencing, were able to unblock the city of Deir-Ez-Zor, force the Euphrates River and start clearing the rest of the province of the same name from ISIS terrorists (*). Another stronghold of the radicals has already been taken - Mayadin.

In parallel, along the opposite bank of the Euphrates River, the offensive forces of the Kurdish militia are developing. And from the side of Iraq, the ISIS terrorists (*) are crowding the Iraqi army. As a result, a kind of "end point" of the military-geopolitical interests will border with Iraq Albukemal city. It is to him that the militants from “Jaish Magavir Al-Saura”, “Kuwat Shahid Ahmad Abdu” and “Asuad (Usud) Sharqiyah” will strive. It is not difficult to guess that the United States will give them the go-ahead. And the main task of the illegal armed formations will be the capture of the city earlier than government forces do. After all, Albukemal is not only an important transport and logistics hub, but a geopolitical center of influence on the northern coast of the Euphrates River. It is in that region of Syria that Washington plans to create a zone of its influence. Therefore, the base near Al-Tanfa and the Rukban refugee camp are all a deliberately planned short-term project, the logical end of which will be the swift maneuver of the militants towards Abukemal and its subsequent seizure.

It is there that the decisive battle will occur, as a result of which the zones of influence in Syria will be finally determined. It is advantageous for the United States to create a coalition, an alliance, as you please, in the over-the-front Syria, where a real "democratic" puppet government will sit, under the command of Jaysh Magawir al-Saura or any other group. And how in that case further events will develop is not difficult to predict. Washington in modern stories not once showed itself in the Middle East.

* - ISIS is a terrorist organization banned in the Russian Federation.

Ctrl Enter
Noticed a mistake Highlight text and press. Ctrl + Enter
We are
What you didn't want to know about EnglandMilitary reform as an integral part of the security concept of the Russian Federation: Systematic dynamic assessment
13 comments
Information
Dear reader, to leave comments on the publication, you must to register.