October 22 2017
53
Leader of the Ukrainian "Radical Party" Oleg Lyashko called on the ex-president of Georgia, the former head of the Odessa region and the former Ukrainian Mikhail Saakashvili to "immediately return" to their homeland, reports RIA News. 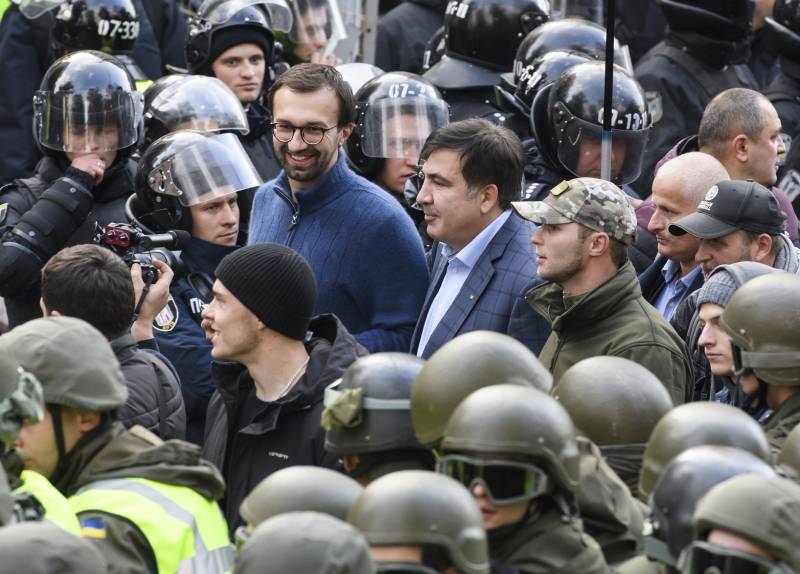 The party of Saakashvili devastatingly lost the elections in Georgia. More than three times the gap! Saakashvili, immediately return to your native Georgia, it dies without you. Bless the loyal Georgians with the five-week reform plan and save your country. And we will save Ukraine ourselves,
wrote Lyashko on his Facebook page.

On the eve of Saakashvili, at the Verkhovna Rada building in Kiev, he presented his “Plan for the salvation of Ukraine in 70 days”.

Last Tuesday, several thousand people with flags of nationalist parties "National Corps" (created on the basis of the national battalion "Azov"), "Freedom", supporters of the parties "Movement of New Forces", whose leader is Saakashvili, "Batkivshchyna", "Self-help" and a number public organizations began a protest near the Rada.

They demand to abolish parliamentary immunity, change the electoral legislation, and also create an anti-corruption court.

In addition, today Saakashvili called for the liquidation of the National Guard and SBU.

This is not the National Guard, this is the baryzhnaya guard, which was created in order to protect the main huckster from its own people. National Guard should be closed
He said at a rally.

The politician expressed indignation at the fact that 2,5 is allocated more funds for the needs of the National Guard in times than for the Ukrainian army. He stated that "this money must be given to Ukrainian citizens."

In addition, the former Georgian president called for the abolition of the SBU and the creation of an "effective foreign intelligence service."

Ctrl Enter
Noticed oshЫbku Highlight text and press. Ctrl + Enter
We are
The action “Military service under the contract is your choice!” In Rostov-on-Don: future contract servicemen, exhibitions and “Russian Knights”China expands its amphibious capabilities
53 comments
Information
Dear reader, to leave comments on the publication, you must to register.