The Ministry of Defense of the Russian Federation: the coalition bombed Rakku, as Dresden in 1945

October 22 2017
90
As part of the operation to liberate Syrian Raqqa from the terrorists of the "Islamic State" (ISIS, a grouping banned in the Russian Federation), thousands of civilians were killed, reports TASS statement by the representative of the Ministry of Defense of the Russian Federation Igor Konashenkov. 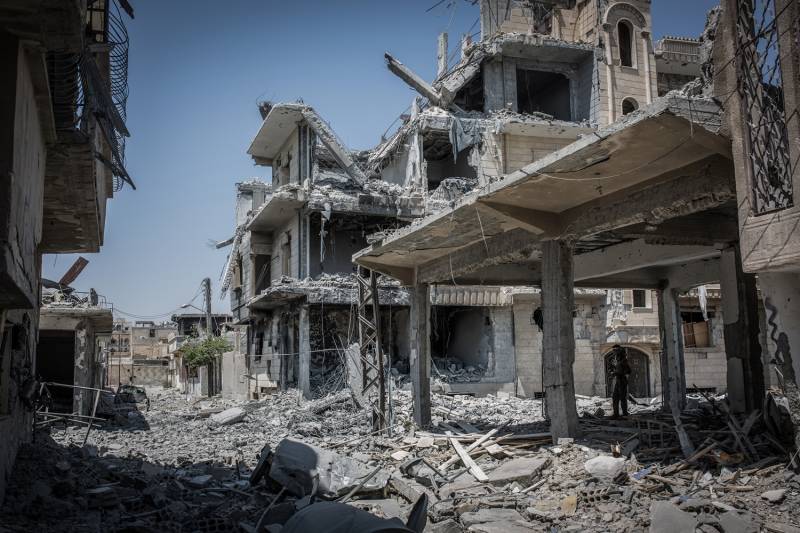 Raqqa inherited the fate of Dresden 1945 of the year, wiped off from the ground by the Anglo-American bombings,
said Konashenkov.

Currently, Washington, Paris and Berlin “announce the urgent allocation of millions of dollars and euros allegedly to restore peaceful life in the city, in reality, striving to quickly cover up the traces of the barbaric bombings aviation "The United States and the" coalitions "who buried thousands of civilians" liberated "from the Islamic State in the ruins of Raqqah," he noted.

The general drew attention to the fact that earlier France, Germany and Britain refused to send any humanitarian aid to Syria.

Over the past years, Russia has repeatedly appealed to the United States and European capitals — to send humanitarian aid to the people who suffered from the war in Syria. Moreover, they prepared a list of localities where this assistance is needed primarily without dividing the Syrians into "bad" and "good." Every time from Washington, Berlin, Paris and London, the answer was the same: we cannot and will not,
he said.

Konashenkov also noted that "the bravura statements of official representatives of the US administration about the" outstanding victory "over the IG in Raqqah are puzzling."

In particular, he recalled the statement made by Secretary of State Rex Tillerson, which stated that "the release of Raqqa is a crucial stage in our global fight against IS." And before that, Washington said that the US-led coalition, together with the forces of Democratic Syria and the Iraqi government army, liberated more than 87% of the territory of Iraq and the SAR.

In Washington’s representation, IG controlled only Raqqu in Syria, a provincial city where about 200 had lived before the war, thousand people, and by the beginning of the five-month coalition operation for its release, no more than 45 thousands,
said the representative of the Ministry of Defense.

For comparison: Deir-ez-Zor with extensive suburbs on the Euphrates River before the war was inhabited by more than 500 thousand people, and the entire territory of Syria was liberated with the support of the Russian Aerospace Forces 10 days,
added the general.

And unlike the racca, which was destroyed by the bombings, Deir ez-Zor now receives thousands of people returning to its homes every day and restores its peaceful life, he stressed.

As previously reported, for two years with the support of the Russian Aerospace Forces in Syria, IG 87,4% of the country's territory was freed.